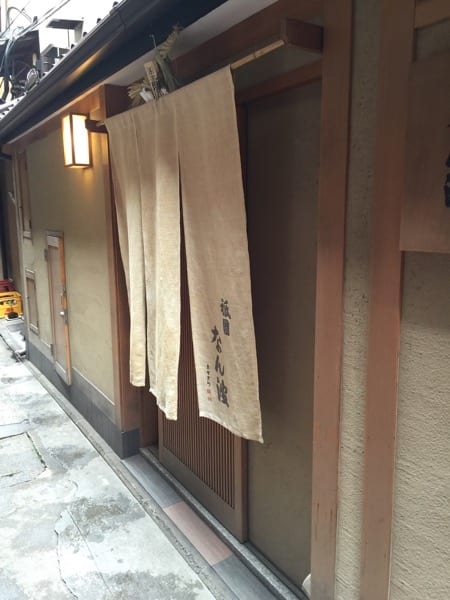 Like Chihana on the opposite side of the main Shijo Dori street, Gion Nanba is also a well-regarded Michelin-starred kappa-style (counter) kaiseki (traditional multi-course dining) restaurant hidden down a narrow alley. Chihana has 3 stars, Gion just 1, but after splashing out on the former we realised that we could still afford one more fine-dining experience in Japan - the exchange rate we got was favourable at just under 170 yen to the pound. The good thing about Gion Nanba is that unlike most of the high-end restaurants we looked at in Japan, they actually allow web bookings by foreigners, the choice of counter or western table seating and a choice of courses (prices exclude tax and service charge):

Simply pick the amount of courses you want, preferred seating and three possible sitting times and you'll get an email letting you know where they can fit you in. As with Chihana it's tricky to find but there's a video on their website explaining where it is, and so with our shoes safely tucked away at the entrance we headed upstairs to a tiny room containing a mere two tables. We went for the 8-course menu and here's what we ate: Amuse-bouche (Sakizuke). Asparagus mousse, shrimp, crab, squid, bean, plum in vinegar. It's unusual to find asparagus in a mousse and this was strangely refreshing. Mostly seafood yes but with more of a fresh earthy taste! Nicely presented too. 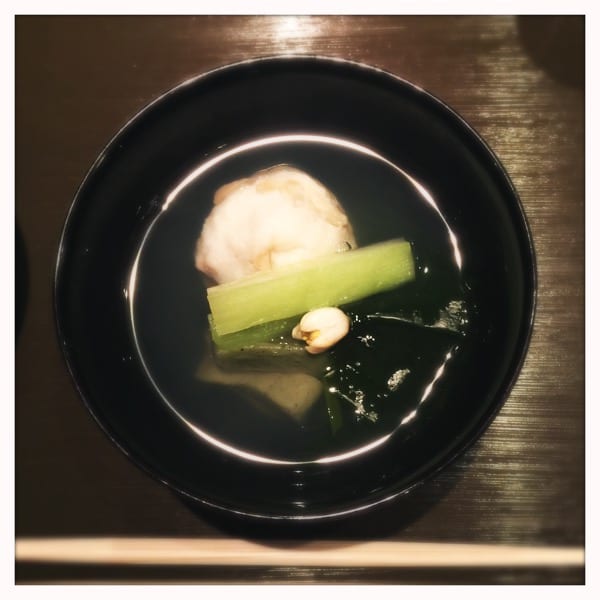 1. Mixed fishball comprising some sort of ocean fish, squid and crab in a hot soup with vegetable mochi, seaweed and yuzu flower. A mixture of seafood textures in the fishball in a light clear broth. 2. Sashimi with soy sauce and ponzu with orange vinegar, radish and spring onion.
The sashimi comprised sea bream, tuna, squid and bonito.  Not much to say other than good quality fresh and, of course, raw seafood! 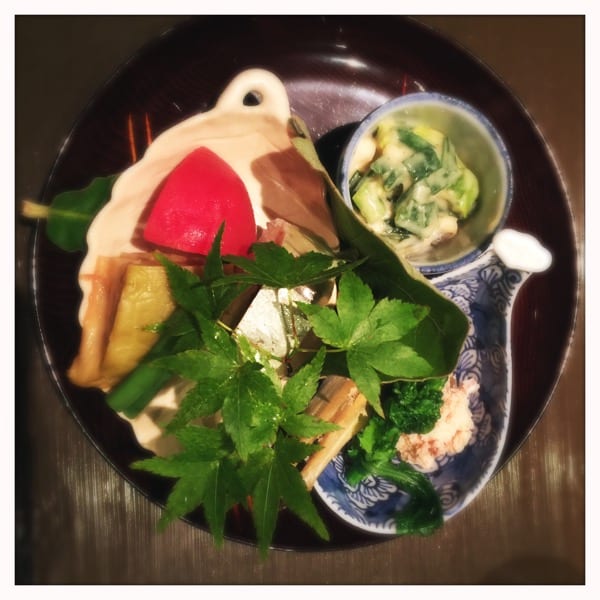 3. There was a lot on this busy tray! In the little round bowl top right was miso (not in soup form), spring onion and shellfish - mixed together to become like a creamy coleslaw. In the teardrop dish was ayu, also known as "sweet fish" and considered the most important freshwater fish in Japan with a natural cucumber and melon flavour. Alongside the ayu was broccoli and sea bream roe, and on the largest shell-shaped dish was tomato, mackerel sushi and aubergine which we suspect was actually some form of pickled gourd though it had a surprisingly creamy flavour like avocado that we wouldn't associate with either aubergine or gourds. 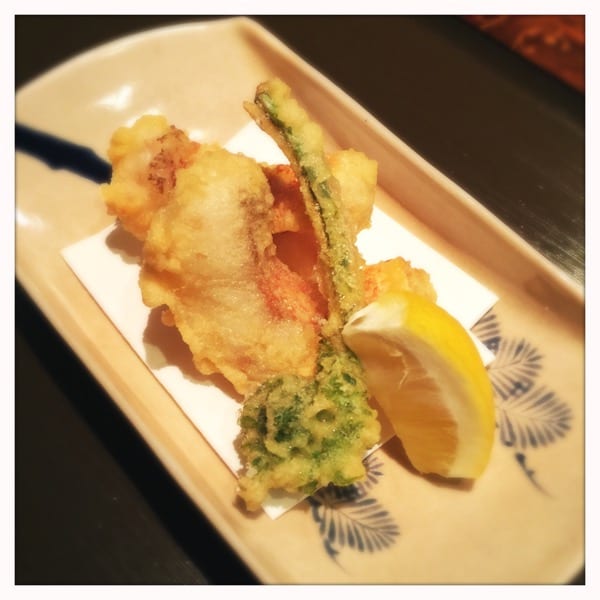 4. Sea bream tempura with wild mountain vegetable. All the tempura we had in Japan was great and this was no exception. One of the few dishes here where saltiness was more dominant than umami. 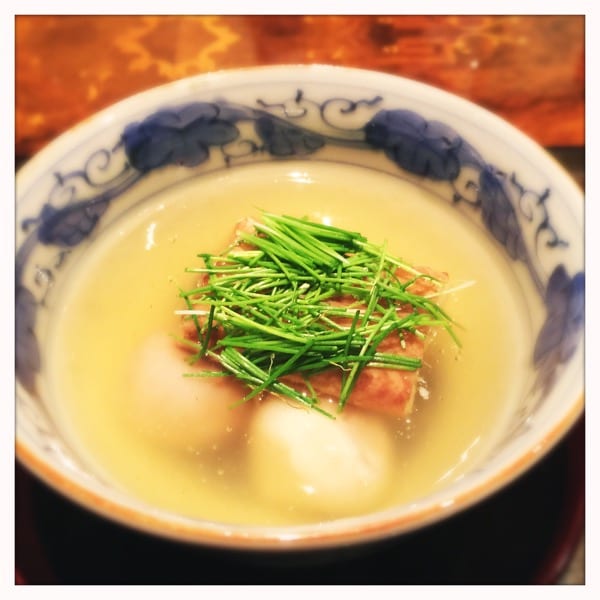 5. A mix of freshwater and ocean now - unagi (freshwater eel) and anago, described by our server as "cousin of unagi" which is a sea eel with spring onion, mountain potato and some other vegetable though we're not sure what exactly. The soup wasn't exactly a soup, it was more of a gel or savoury jelly so a bit unusual at first but tasting good. 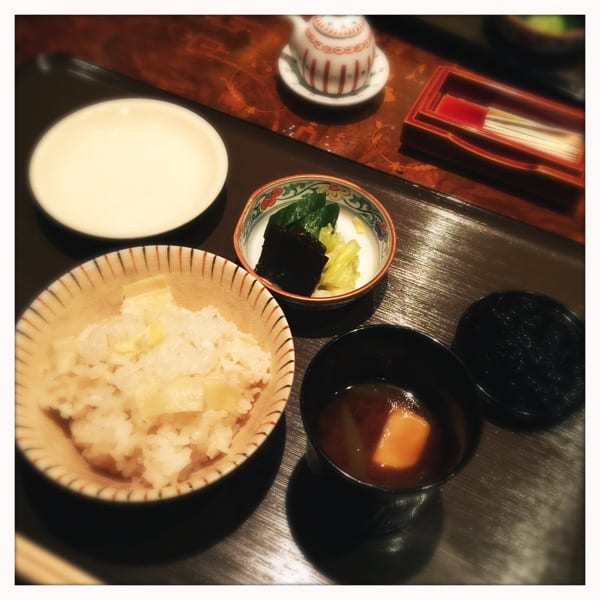 6. Sea bream rice, miso soup , pickles. This was probably the most pungent miso of our Japan trip - tasting a bit like Marmite! 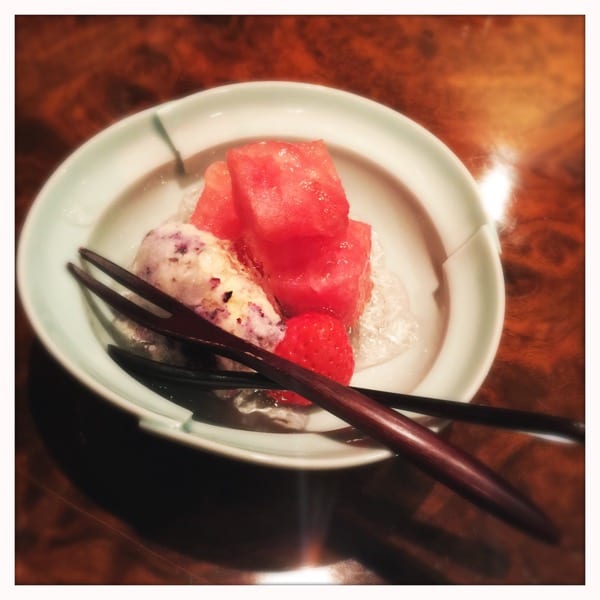 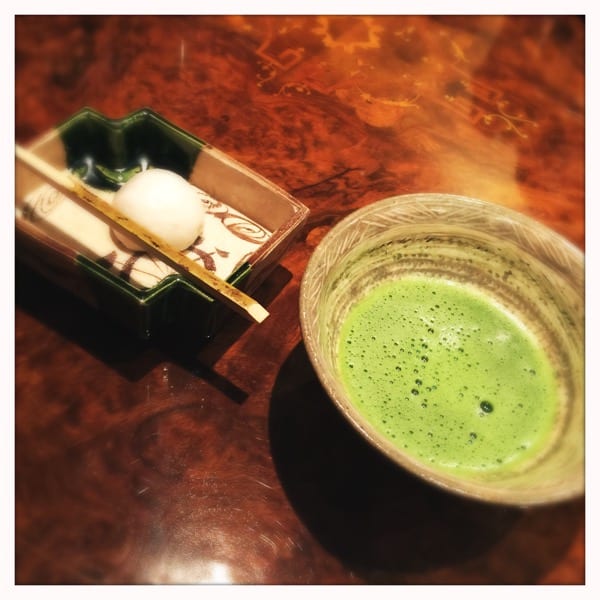 8. Mochi manju with an adzuki (red bean) paste filling alongside traditional matcha green tea which was served in a small but wide bowl rather than a cup.

So that completes our 2.5 hour, 8-course epic! Each dish was small but they all mount up so we were pretty full when we finished.

The food was lovely, all fresh and beautifully presented making this an excellent introduction to kaiseki cuisine. The only slight downside was that some items made re-appearances throughout the meal, i.e. sea bream was in 3 of the courses. Service was friendly, our green tea was kept topped up and our server did an entertaining job at translating into English! We actually preferred it to the three-starred Chihana that we'd visited a few days earlier (you can read our review here) and it was slightly cheaper, the cost of our 8-course menu was 8,000¥ each plus tax and service tax taking us to 19,008¥ in total (we didn't order any additional drinks other than green tea which is included) so that's about £112 in total for a memorable meal.

In two weeks travelling around Japan we used some interesting toilets with unusual features but by far the best toilet we experienced was at Gion Nanba. As you open the door the toilet seat automatically lifts, music plays, there's a pleasant odour and a glass floor with pebbles underneath. It's like a relaxing zen garden.

At the end of the meal as we were leaving the chef appeared ninja-style out a secret door to greet us, we walked to the end of the passage turned around and he was still standing there and then he bowed at us! You've never experienced service until you go to japan! 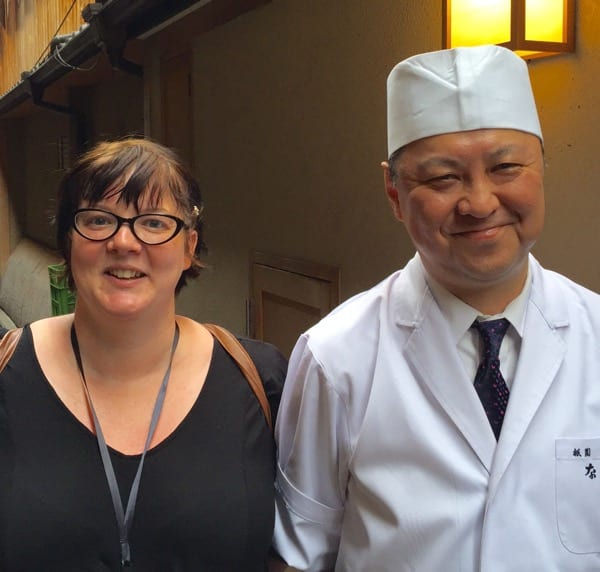 TL;DR
+ Foreigners can book online and there is a choice of courses/seating styles
+ Fresh, seasonal, well-presented food
+ An excellent introduction to kaiseki cuisine
+ Our server made a good job of explaining food in English
+ Most zen-like toilet we've ever encountered!
+ Chef came out for a photo!

- Difficult to locate the restaurant. No English outside that we could see
- Some ingredients repeated through the meal

If you decide to visit it's the ground level alley directly opposite the Starbucks here.
website: http://kyotonanba.com

« Glasgow to get its own cat cafe?
Travel: 5 reasons to visit Mostar »