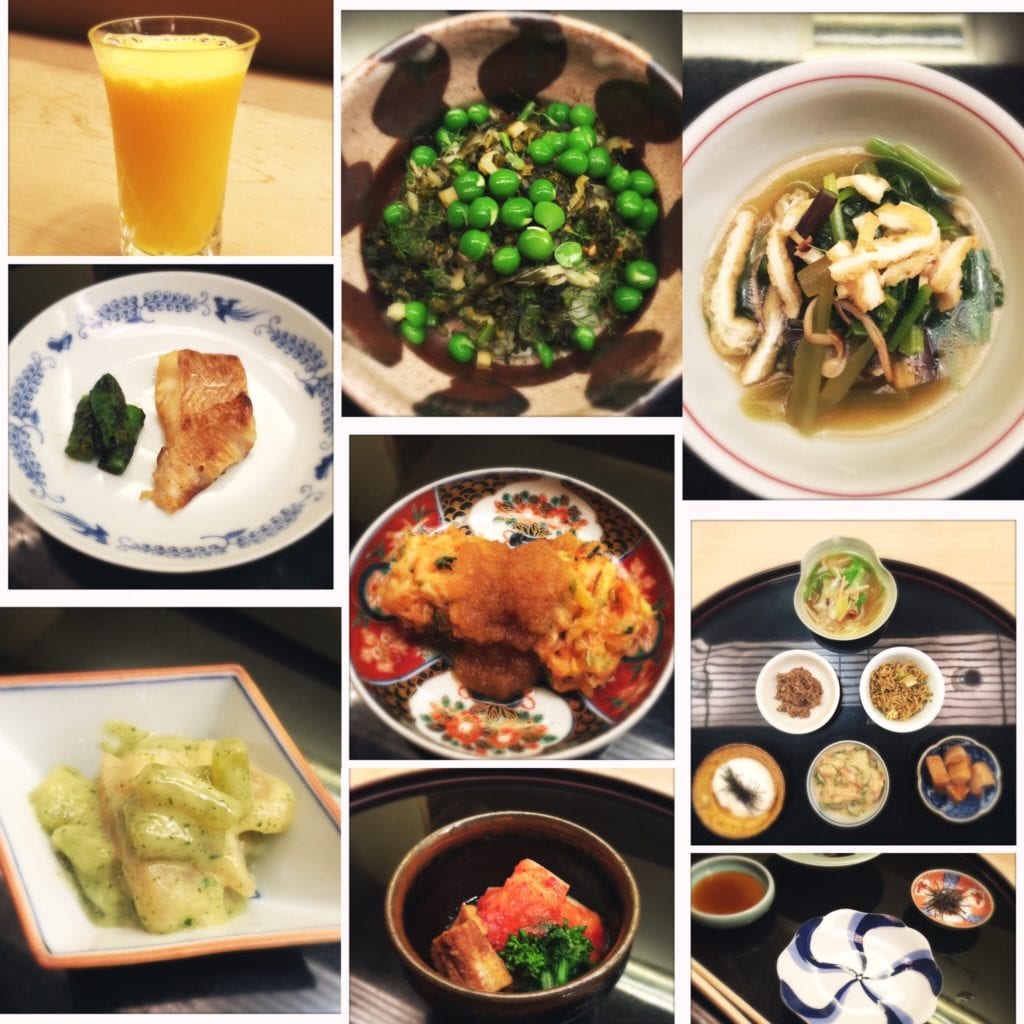 Kyoto in Japan has an abundance of Michelin star dining so we were spoiled for choice, typically though, as a foreigner you can't book online so reservations are best made through your place of accommodation. We had drawn up a list of restaurants to visit during our time in Kyoto but the first two were fully booked so we went with our third choice: Chihana (one thousand flowers), a kappa-style (counter) service restaurant that serves Kaiseki cuisine (multiple small courses like an Asian equivalent to haute cuisine).

It's been in operation since 1946, so it is well-known to locals, with the son of the original chef keeping the kitchen working.  Chihana has held three Michelin stars since 2010 and this is the first restaurant with this accolade that we've ever visited but we were actually apprehensive about going after reading a number of recent negative reviews on Tripadvisor. 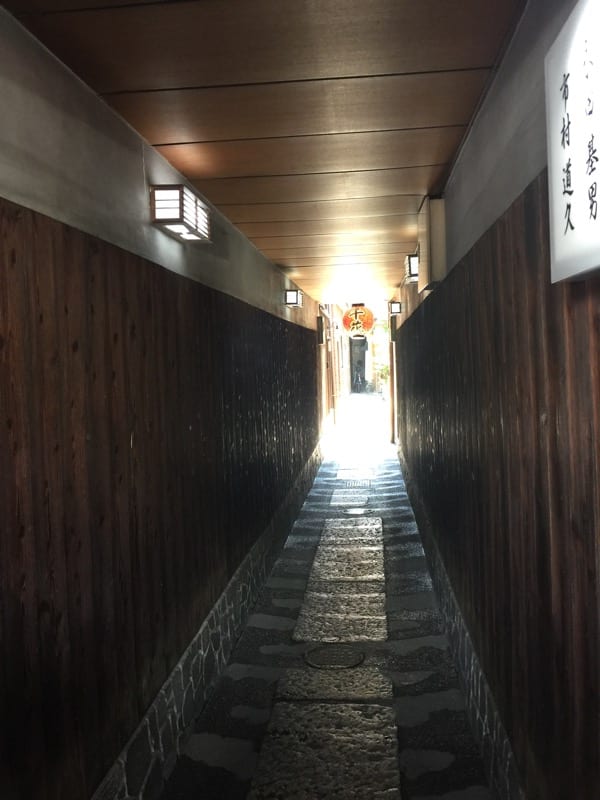 We arrived slightly late for our lunch booking due to a protest and counter protest (both very civilised and respectful as you would expect in Japan!) on the way which meant our bus had to take a detour. We'd done our homework thankfully so found it easily enough but just like Gion Nanba across the road (review coming soon), you might miss the entrance if you don't know exactly where you're going as access is via a narrow passageway off the main shopping street. Follow the path until you reach the hanging noren (fabric divider/door curtains), this shows that the restaurant is open. 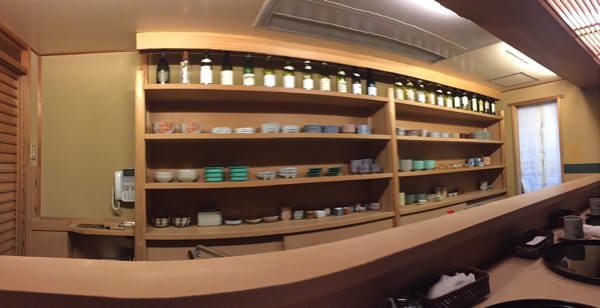 Inside you will find a counter with 8 seats overlooking the prep area and both a Western-style and Japanese-style room. We settled into our seats with some green tea which is included in the price. 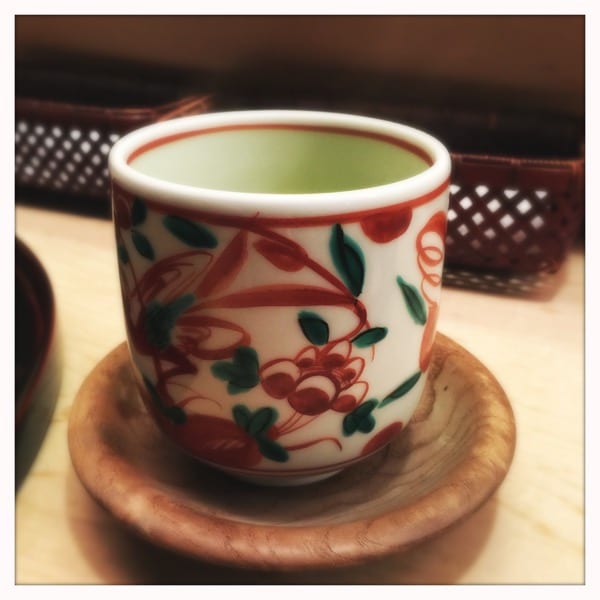 In no time at all we received the first of 11 courses.

As each course was delivered, the server explained the ingredients.  Some things were lost in translation and just amounted to Fish or don't eat this part! 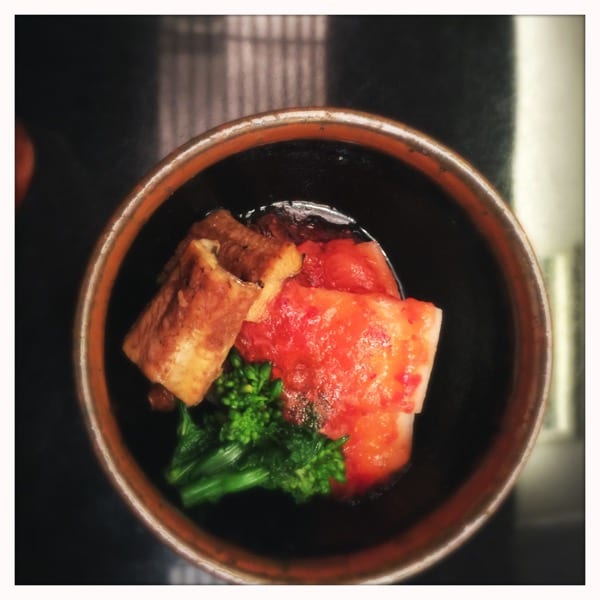 2. Vegetables and cod with miso paste with light umami flavours. 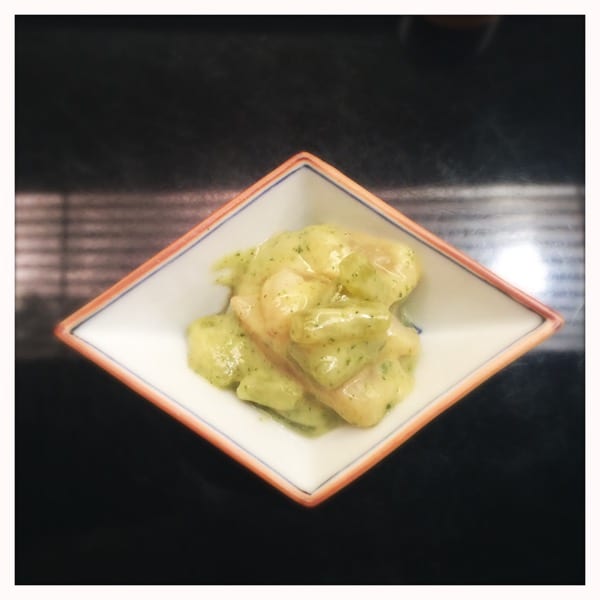 3. A selection of plates: Soy beans, Cucumber and sesame, Tuna and ginger jelly, Bean paste, some sort of little fish and one other dish we forgot to note down. 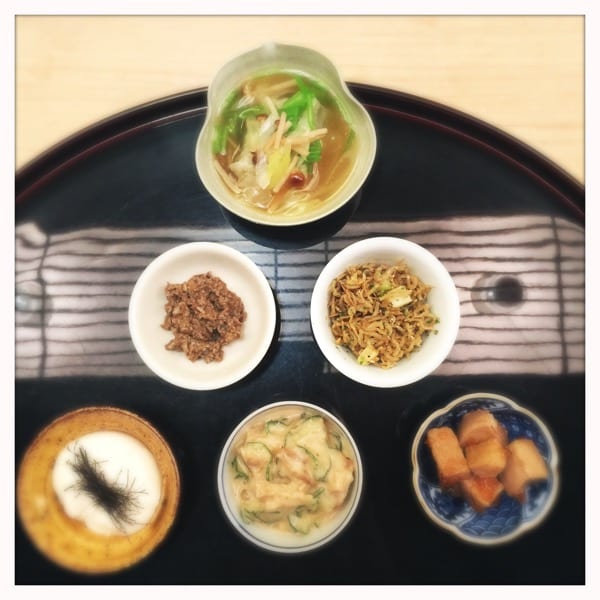 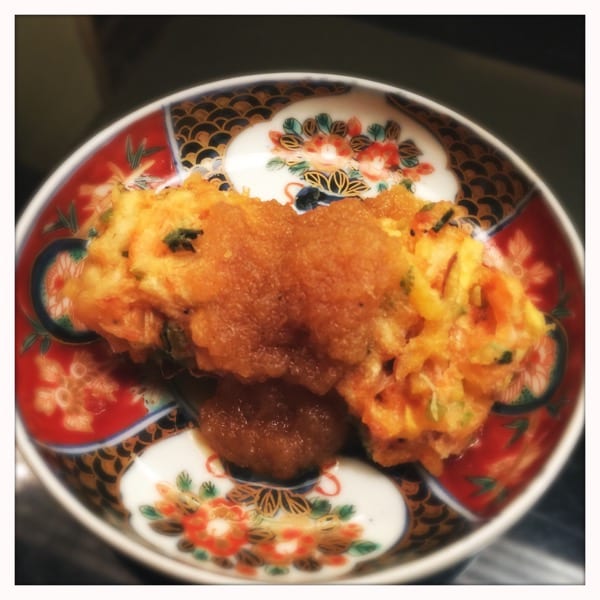 5. Described as Sashimi 2 ways - there was a specific order to dipping/eating this dish. The dried seaweed was just like eating concentrated salty anochovies - delicious for some, not for others. 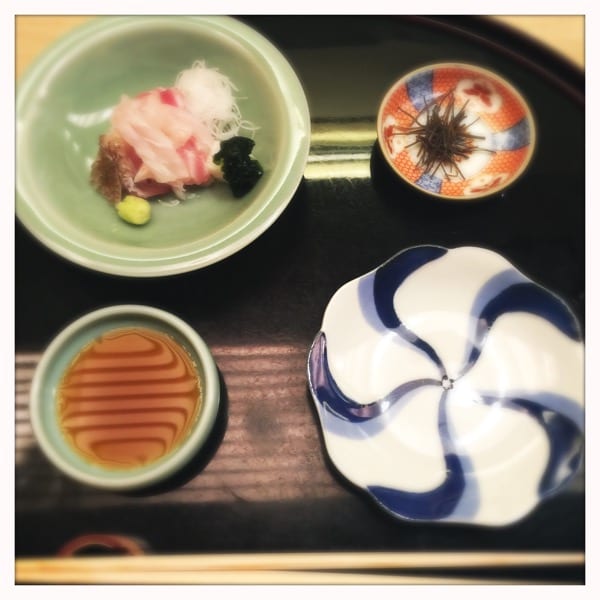 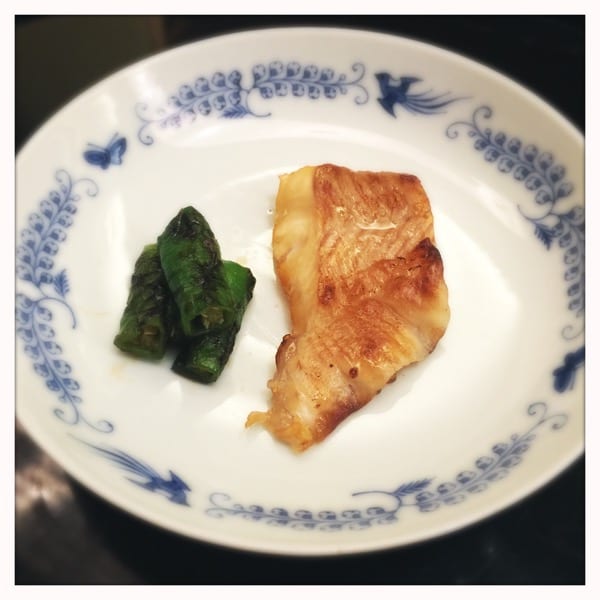 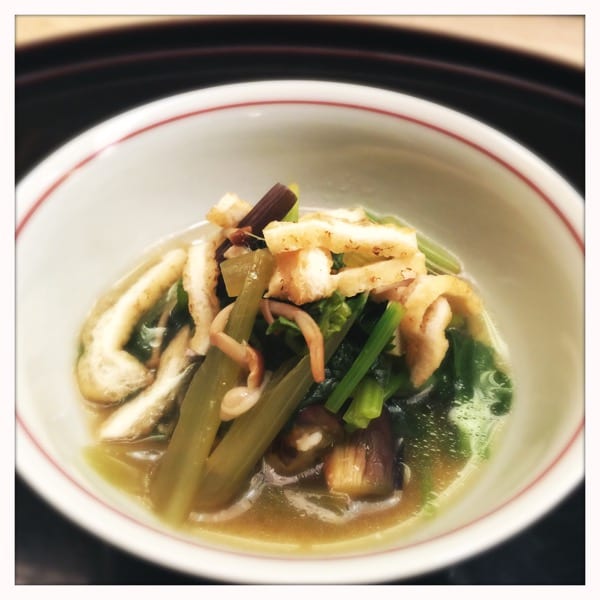 8. Broth with fish and tofu (and inedible leaves!). 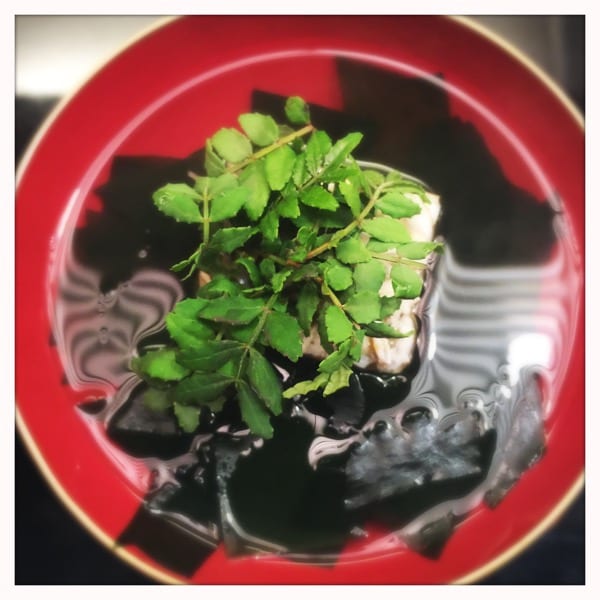 Behind the leaves tiny fish were compressed into the tofu cube. 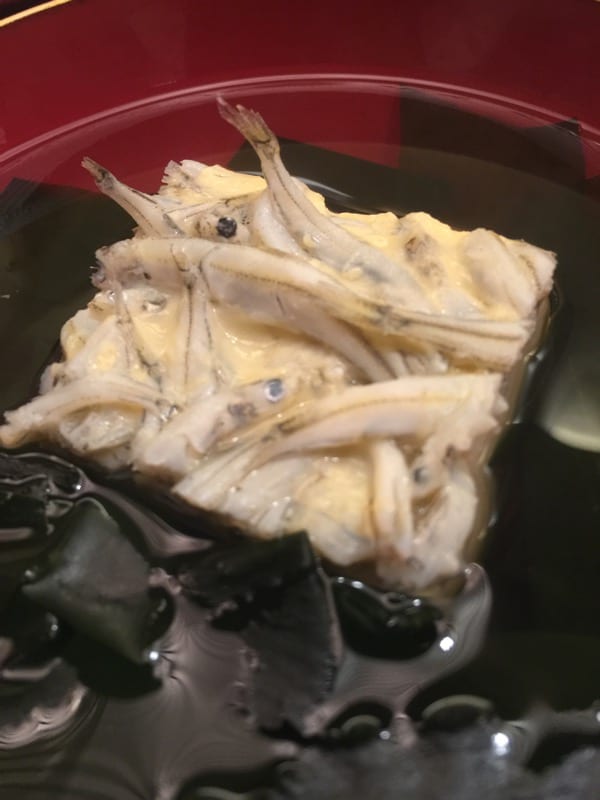 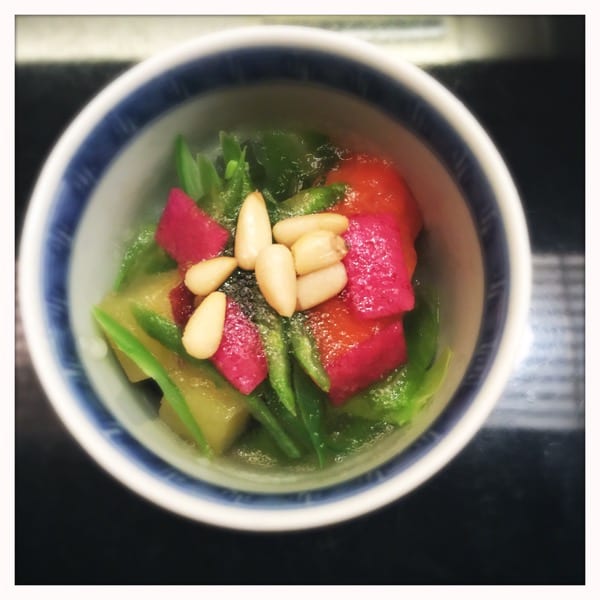 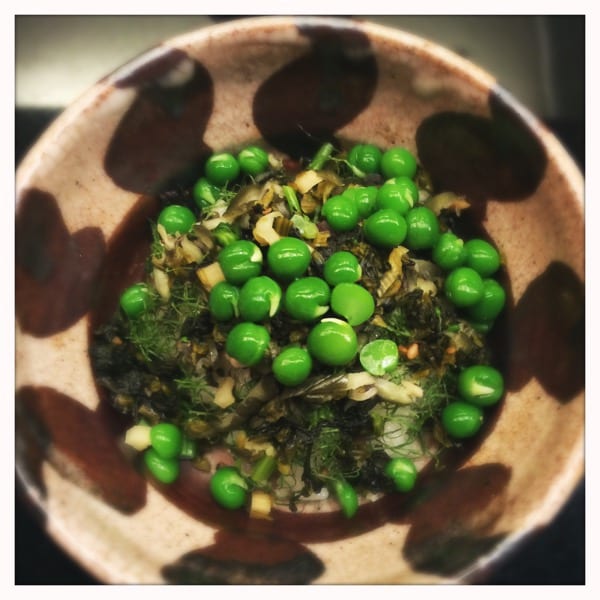 11. No dessert, instead just freshly-squeezed locally grown apple and orange juice but welcomingly refreshing after an umami-heavy meal. 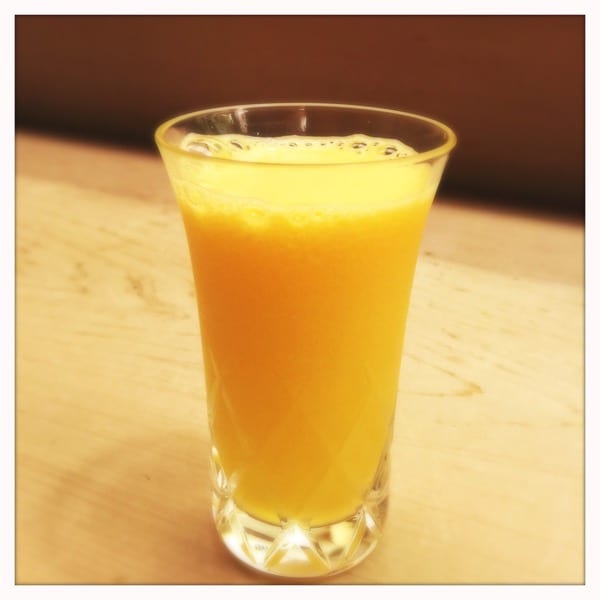 The dishes here are actually quite simple with various layers of contrasting flavours - there were no fancy tweaks. Service was friendly, swift and courteous. Each course was delivered quickly, a bit too quickly for us but then we did arrive late due to our bus being held up.

Our green tea cups were  re-filled regularly without asking.  The last course, the fruit juice, was refreshing but it was disappointing that there were no dessert for this level of restaurant. Is it worthy of three stars? We don't think so.  It's a good restaurant of its type but not of the standard we have had at other Michelin-starred restaurants. We actually preferred the one star Gion Nanba across the road.

We've heard various rumours about what's required to get Michelin stars, which have included: fine cutlery, silver service, windows, a large team of staff, white tablecloths - and at a specific length. Chihana had none of these, the restaurant is rather basic-looking and much of the food was raw/lightly cooked but it was different in style to European nouvelle cuisine and unlike fancy restaurants back home there was no foam, no smoke, no dry ice, no snail porridge, no savoury ice-cream, no fruit soup, no deconstructed sushi, not even any bread and butter.

It is Kaiseki and food has been prepared this way for centuries, it isn't designed to be innovative and yet it has 3 Michelin stars so either the requirements for 3 stars are simply to have fresh, seasonal, sustainable food or the criteria for Michelin stars in Asia is different from Europe as we could list a number of restaurants with no stars in Scotland where we've had more memorable meals. We did however both still enjoy the food so we certainly don't agree with the 1 star reviews on Tripadvisor. If you are planning a trip to Kyoto and thinking of going here we would suggest the lunch menu as the total cost for our food was 10,000 yen each (around £62 which includes the tea and service charge and remember there is no tipping) but dinner is around double that.

+ Fresh, seasonal ingredients
+ The tuna with ginger jelly was pretty special
+ Relaxed atmosphere
+ You can watch the food being prepared from the counter

« What type of chippy are you?
Recipe: Salad Shirazi »