The ever-expanding Silverburn now contains a cinema and a number of new food outlets including a brand new shiny TGI Fridays which is located right at the new entrance from the bus station. We visited on a busy Saturday night (with a reservation) and were quickly seated, going straight for the cocktails. 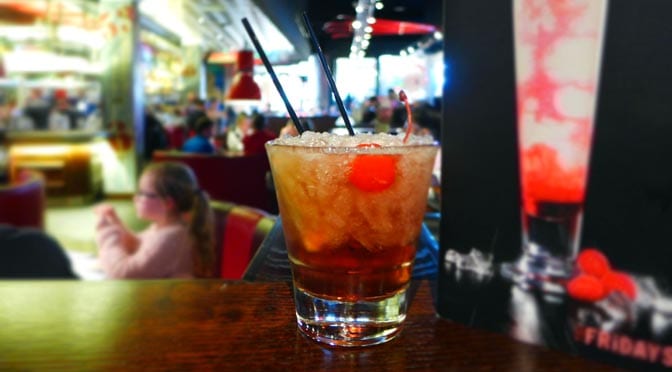 Cherry Stag (£6.30) - Jim Beam black cherry bourbon, Luxardo amaretto, BOLS cherry
brandy and a dash of lemon juice. We also had a Pretty N Pink (£6.80), which is a cocktail created by a TGI staff member that was voted onto the menu. It's a bit like an ice-cream float of yesteryear - lots of ice-cream and raspberry liqueur. According to the menu it also contains Pink Pigeon spiced rum, pineapple, coconut, BOLS Grenadine but we couldn't taste any booze so it could probably have done with another shot of something! Alternatively if you don't like your drinks boozy then this could be the cocktail for you! 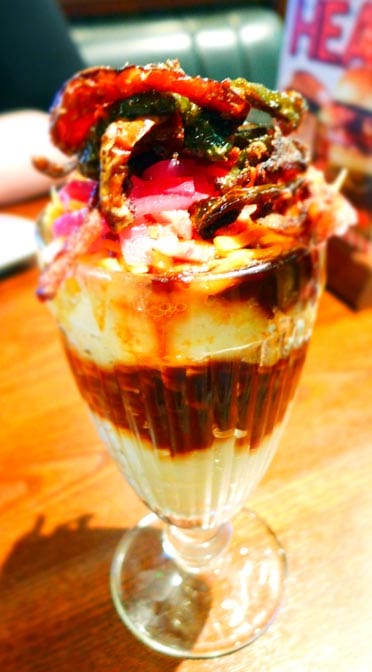 To start, we both fought over the slightly bizarre-sounding Pulled Pork Sundae (£5.99). This mashed potato (rather than ice-cream) based appetiser was served in a sundae glass so was a hefty portion with layers of BBQ sauce and pulled pork topped with cooked jalapeños and pickled red onions, crispy bacon pieces and grated cheddar cheese. It was a bit low on pork to be honest but was full of smooth mashed potato and barbecue sauce.  This could easily be a romantic starter for two. 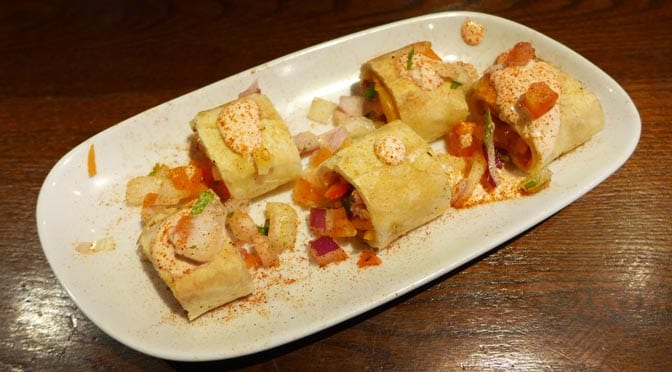 We also ordered bacon Taquito Bites. Which were bacon and cheese filled torillas with a cayenne pepper dusting.  This was a proper starter portion (so Mrs Foodie stole some of my pulled pork sundae whilst I struggled!).  Cheesey and bacony with bite sized portions. 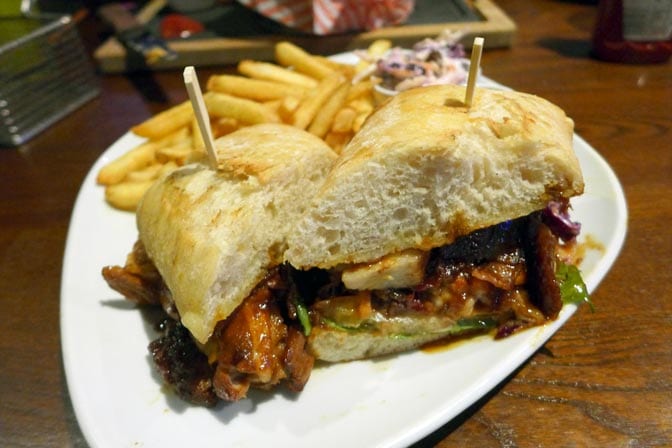 The first of our mains was the 3 Little Pigs  (£10.49) from the Hot Sandwiches section, which is pork 3 ways: bacon, BBQ pulled pork and Jack Daniels pork belly. This was a very messy proper American sandwich with layers of meat and salad served in a sweet panini-type sandwich with chips, apple slaw and honey mustard mayo on the side. Very filling, in fact there was far too much food for us to finish. 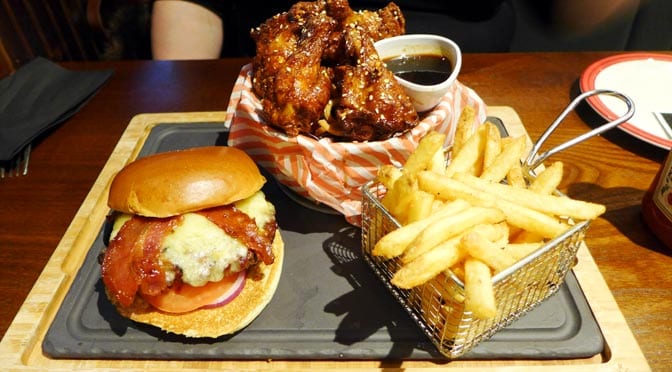 TGI Fridays - Finish What Ya Started

Finish What Ya Started (£15.99): A massive plate with burger, Jack Daniels chicken wings and fries.The bun held up well despite also being quite messy! The burger wasn't totally uniform so seemed like it had been freshly minced. The chicken wings were also more Korean-influenced than we were expecting with sesame seeds and what seemed like a sweet chilli glaze - which is how we like our wings. The best sauce in the world,  the Jack Daniels sauce was provided on the side. We barely touched the chips as there was so much food.

If you find that shopping builds up an appetite then TGIs could be the place to eat after a trip to Silverburn but unless you have a monster appetite we'd recommend sharing a starter, as a starter and main each was too much for us. Service was friendly, quick and efficient. Toilets were clean and looked after.

In the run-up to Easter TGIs have a promotion where you can win a years supply of chocolate bunnies provided you're into selfies - ask staff for some bunny masks and upload your photos to Twitter at'ing @tgifridaysuk with hashtag #showmethebunny.

- Portions possibly TOO big - never thought we would say that!

The full menu and info pertaining to the Silverburn restaurant can be found on their website: tgifridays.co.uk They also have restaurants in Glasgow city centre, the Easterhouse Fort, Braehead Xscape  and lots of other locations nationwide.