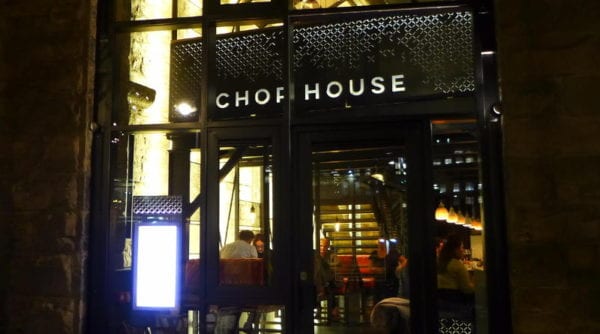 Chop to it! Get to the Chop House…

This was my first time visiting The Arches on Market Street, a relatively new development of cafes, restaurants and niche shops in the bridge arches under Jeffery Street along from the quieter entrance/exit to Edinburgh Waverley railway station. The Chop House, sister restaurant to Chop House Leith, is the last arch in the row making it the highest and they have utilised this height by installing an additional floor in the industrial-looking restaurant. 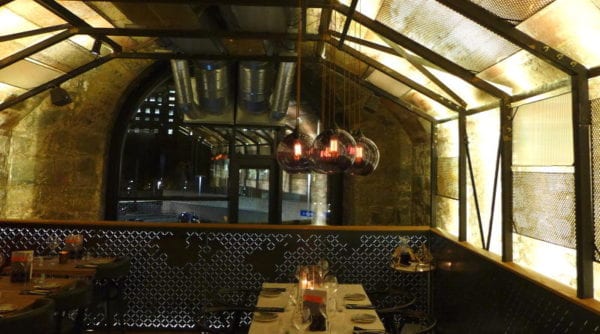 We arrived on a chilly Thursday night in November and were thankful for the warm welcome from staff. Although it was just 6:30 the restaurant was already filling up as we were led upstairs to the (approx) 25-seater mezzanine level where we were invited to enjoy a cocktail as we perused the large drinks menu. 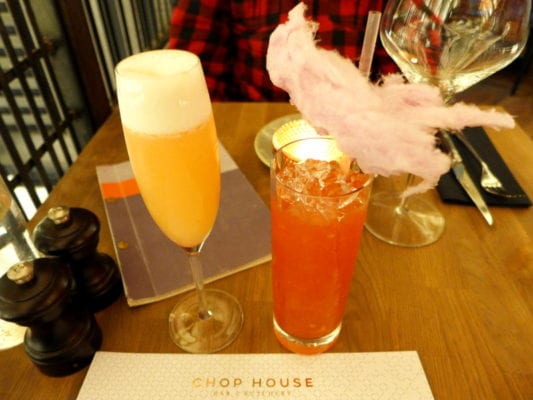 My ‘Rhubarb Fizz’ (£8) was a balanced blend of Botanist gin, Aperol, rhubarb and bitters which while tart, had an element of sweetness which gave it a level of well-rounded drinkability. Mr Foodie, in typical fashion, asked for the most unusual cocktail on the menu and received a Stonestreet Swizzle (£6.50) which comprised Ketel 1 citron  vodka, Disaronno amaretto, raspberry, lime and angostura bitters. It too, was tart but was topped with a fluff of sweet candy floss. The cloud-like confectionary had a familiar taste and it took us a while before we worked out what it was like – Vimto!

Halfway through my cocktail came a question from our friendly waitress, “Have you eaten at Chop House before?”. We hadn’t and so she explained that they pride themselves on serving dishes to share, basically big cuts of beef like a half kilo Chateaubriand for example. She spoke very quickly and I think we got the jist of it but it wasn’t what we went for as we wanted to try different cuts. 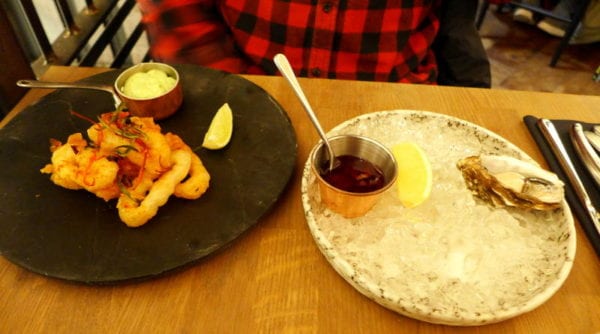 For a starter I went for the crispy squid with green pepper mayo (£7.00) and an oyster. They sell their oysters for £2.00 each, beautifully fresh, perfectly schucked and served with the most delicious shallot vinaigrette, it was fantastic! The squid rings were fried in a light, crispy, almost glass-like batter and dusted with smoked paprika, I couldn’t fault them either though the green pepper in the mayo didn’t really lend much to the dish, a simple aioli would have been just as good, still, pleasant none-the-less. 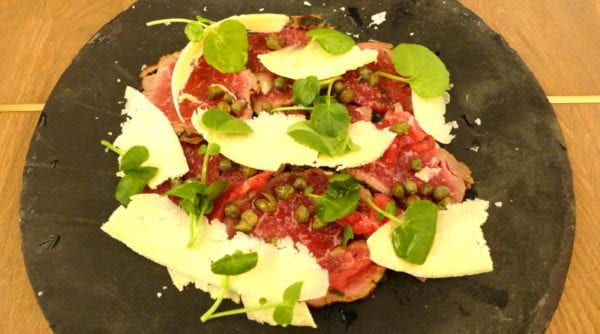 Mr Foodie was firmly on a bovine trip, ordering the beef carpaccio (£9.50) and then proclaiming that it’s the best he’s ever had in his life! Cut thicker than your average carpaccio this was a quality bit of meat, rare and tender with a good amount of caper zing and “Anster crumb”.

Moving onto my main course, I went for a 350g (12.3 oz) rib-eye steak (£23) Bearnaise, medium-rare. This hulking chuck of meat made me grin on arrival, I knew I was in for a treat. No extra garnish on the plate, just meat, and a plate, no fuss, no need, it spoke for itself! Chargrilled, crispy and salty on the outside, cooked perfectly inside with that rib-eye fat just melting in the mouth. I tried to remember eating a better cooked steak. I used to work in a steak restaurant and have lost count of how many steaks I have cooked and eaten over the years and very few, if any, stand up to this triumph! I was elated, I was salivating with every bite. The Bearnaise sauce was also immaculate, adding a gratifying buttery, fragrant tarragon note to the tender meatiness.

Mr Foodie had the 300g (10.5 oz) sirloin (£25) with bone marrow gravy and was extremely happy with the thickness of the steak and medium-rare cooking. 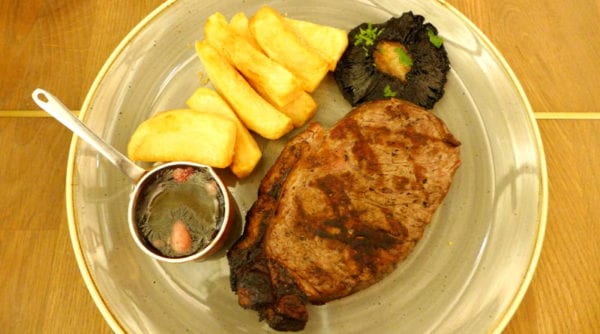 We ordered three side dishes to share. The cauliflower cheese (£3) was good, still a bit ‘al dente’ to how I prefer my vegetables and I would’ve liked a wee bit more sauce, or maybe I’m just cheese-greedy! The dripping chips (£3.50) were fluffy and tasty, the field mushrooms (£3.50) were also excellent, I just wish there were more than three! 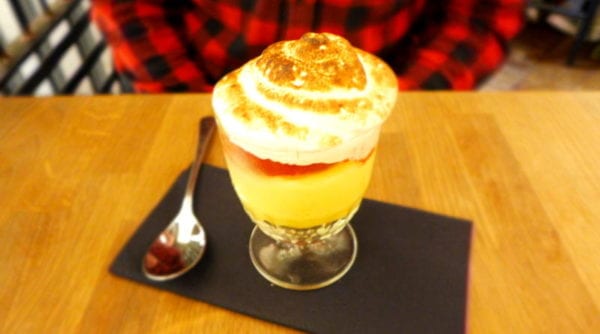 I didn’t think I would have room for a dessert but our waitress gave us just enough time to relax before making the suggestion and sucked us in! I opted for the lemon meringue sundae (£6) which was served in a glass, broken biscuits in the bottom then a rich, tart layer of exquisite lemon curd. The crowning glory for me though was a scoop of raspberry sorbet encased in soft meringue then blowtorched, a-la baked Alaska! An inventive redux of a lemon meringue pie and a perfectly sharp cleanser after all that richness.

Mr Foodie thought long and hard before ordering the Chocolate Brownie (£6) purely for the burnt marmalade ice-cream that accompanied it but unfortunately there was a problem with the ice-cream and so he was offered one of three possible substitutions instead. He opted for the salted caramel and judging by the smile on his face this appeared to be a wise choice. 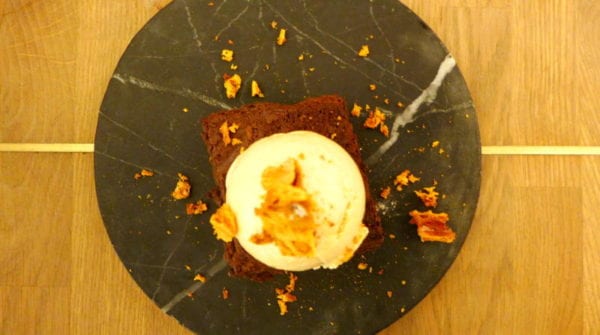 I  struggled to find fault with Chop House Market Street and would recommend it highly to any meat lover who has a few quid to splash around or a special occasion. In fairness, for the price and size/weight, the steaks aren’t much dearer than the typical high street chain (a sauce is included in the price) but these guys specialise in steak. You won’t find much better in Edinburgh and this is quite the accolade from me as I am usually very critical when I eat out (even though I rarely vocalise it) and I strive for perfection. These guys raise the bar at every level and I commend them all on their efforts, from kitchen to front-of-house, top marks!

NB: toilets were not checked on this visit.

TL;DR
+ Big drinks list
+ Amazing beef carpaccio
+ Best steaks in Edinburgh? Huge, meaty and perfectly cooked
+ Attentive staff
+ Very handy for Waverley station so no excuse for anyone from out of town

– It’s not cheap but for the quality it’s actually good value for money!

Disclaimer: we were invited to dine at Chop House. All food was complimentary but drinks had to be paid for.

Our old friend Local Chef has been eating solid food since the early 80’s and cooking in professional kitchens for the past 15 years. A huge fan of fresh produce, hater of burgers and sloppy service, his favourite foods are classic European and modern Eastern/Asian.

We’re delighted to have him on board to write for us, join Local Chef here on his jaunts around Edinburgh and beyond as he seeks edible perfection and casts a quizzical eye over new and established eateries.