Stuart Muir was head chef at Harvey Nichols Forth floor restaurant for around 13 years, before that he was head chef at Knockinaam Lodge near Port Patrick in Dumfries & Galloway, where he earned a Michelin star and 3 AA rosettes at the young age of 22. 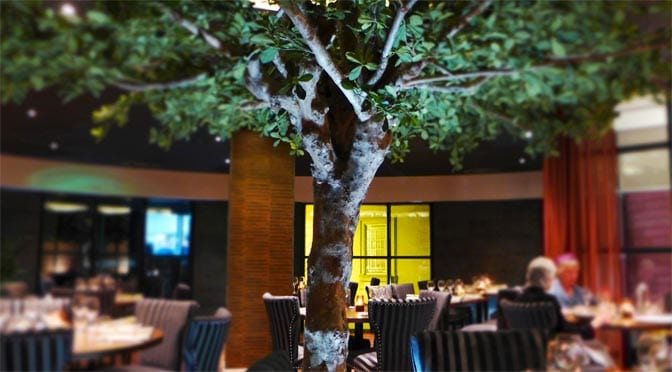 He now has his own restaurant, Dine Edinburgh, at the confusing address of "Saltire Court" which doesn't exist in my Smartphone's built-in map nor the other app I've downloaded! The restaurant is actually located on the first floor of the Traverse theatre building off Lothian Road which opened in November and we were invited in to try the festive menu which included Partridge, pear, and we were sitting underneath a tree so were suitably in the spirit of things! Entrance to Dine is through the rounded Traverse building and upstairs, past the mossy growing wall. We visited for dinner just before Christmas when it was very quiet so I don't think many people were aware of its existence! 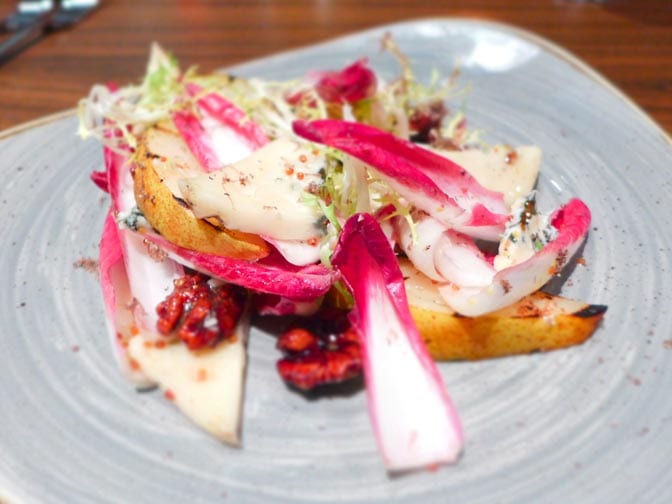 To start off I opted for something unusually light - the aforementioned (chargrilled) pear, chicory, Lanark blue cheese and black truffle salad. I don't usually order salad in restaurants but this was well worth it, in fact the best salad I'd had all year, if salads were up to this standard in most places I'd eat them more often! The pear was delicious, just on the verge of ripeness so retaining crunch but with a subtle smoked flavour from the grilling, the chicory was also crisp with sweet candied walnuts, soft blue cheese and restrained truffle making this a great dish of contrasting textures and fresh ingredients that work perfectly together. 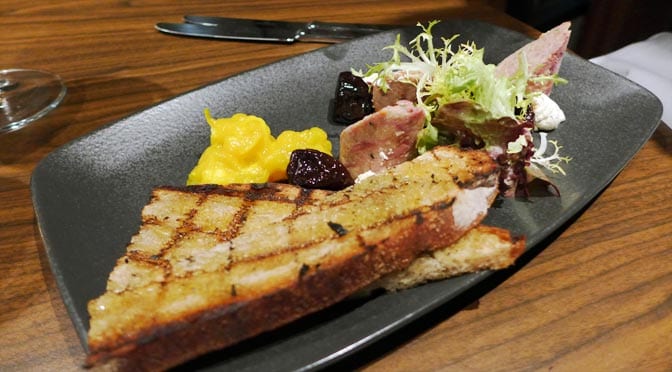 Mrs Foodie had Borders pork and ham rillette with whisky prunes, home-made cream cheese and piccalilli. The rillette came in thick free-standing chunks, meaty but still easy enough to smooth over the toast. This was another dish that could've been boring but was kept interesting by the contrast of textures and flavours: coarse meat, juicy boozy prunes and tart piccalilli. 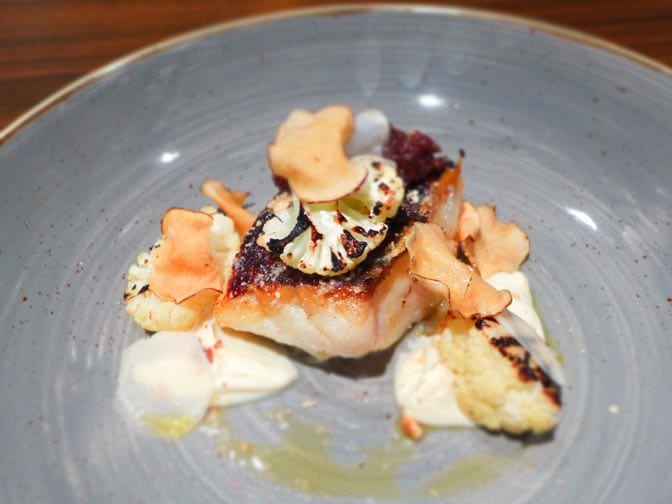 I had the cod, which might look quite small here but it was a really thick meaty chunk of fish with a pleasantly salty chargrilled skin. The roasted cauliflower florets had caught the heat nicely and the little "crisps" were suitably crisp making this another well-composed dish of quality ingredients. 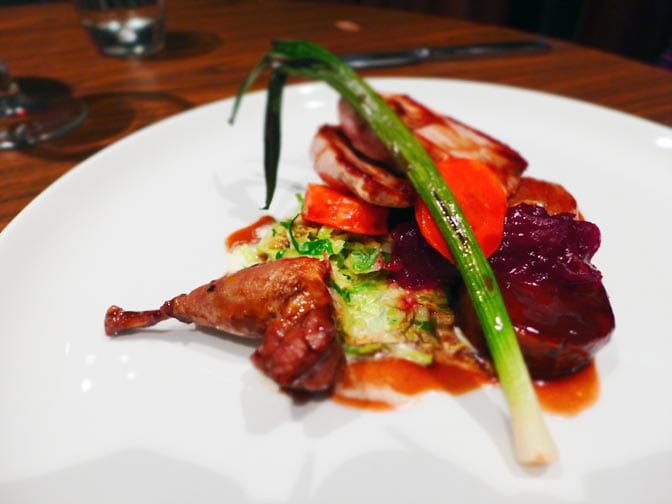 The Mrs had Partridge with spiced cranberry chutney, creamed sprouts, goose fat roasted potatoes, glazed Scottish carrots and baby leeks for her main. Perfectly cooked succulent partridge breasts with a fruity stuffing and perfect baby roasties - fluffy inside and crisp outside, with a selection of winter vegetables. Altogether really delicious. 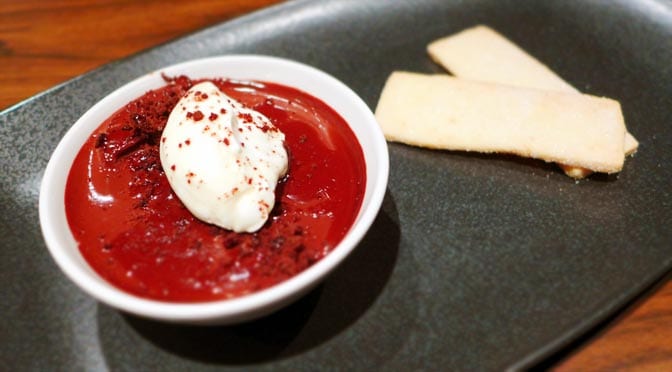 For dessert I had a Chocolate pot with bourbon syrup which was a really thick mousse and cream served with orange shortbread. Smooth and highly enjoyable but I couldn't taste the bourbon. 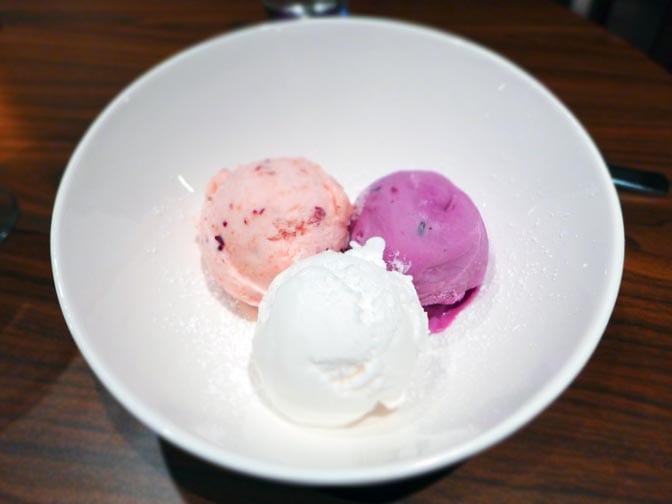 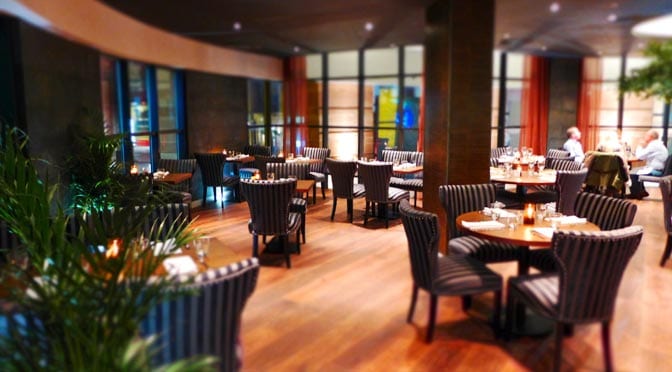 We also had a macchiato and cup of tea, which is supplied by Julius Meinl, one of Europe's oldest tea and coffee merchants. I don't think we've ever encountered Julius Meinl in Britain before but it's proper Viennese Coffeehouse material. The macchiato was a little on the bitter side for me but still drinkable without sugar.

And so we came to the end of a very enjoyable meal, in fact we agreed that this was our best meal in Edinburgh in 2015. So the food was excellent but the service was equally great: well-paced and attentive from both our servers. We expect Dine to do well - if they can just advertise the fact that they're here!

We ate from the A la carte menu (available evenings only) which costs between £28 - £39 for 3 courses. They also have a Market Menu (£14.50 / £17.50 for ⅔ courses) which is available Monday to Thursday and between 5:30pm - 7:00pm Friday and Saturday, and a business express lunch from 12-3pm Monday – Saturday, which is £13.50/£17.50 for 2 or 3 courses including tea or coffee. If you just want a drink then there's a bar with a decent selection of house cocktails, wine and they also stock a few beers we hadn't come across before. 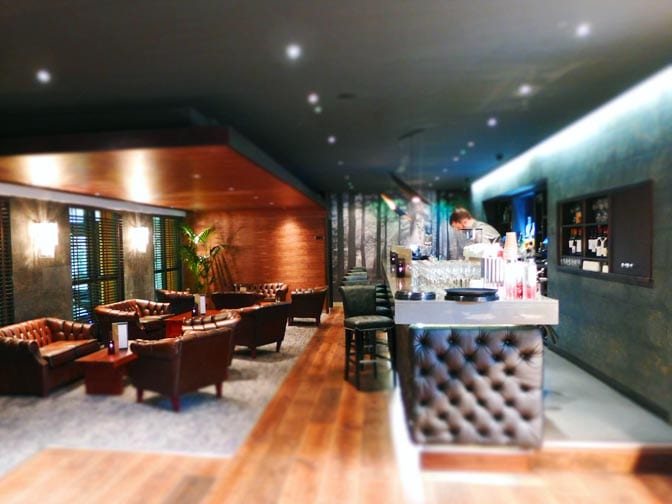 Both male and female toilets were checked and were clean and well-stocked but there was no mirror in the gents.

TL;DR
+ Best meal we had in Edinburgh in 2015
+ Staff were great
+ Coffee from one of Europe's oldest tea and coffee merchants!
+ Easily accessed in Edinburgh's west end...

- ...but perhaps a bit hidden away if you don't know it's there
- No mirror in the men's bathroom

We received a complimentary meal for the purpose of review but we consider this an accurate reflection of the meal - it really weas that good!