Talk about spirituality and you inevitably talk about eastern philosophy. Talk about food philosophy, and you'll typically think of Farm to Table or perhaps Slow Food, both of which are big on the other side of the world. Farmstand in London's Covent Garden takes its inspiration from road-side sellers in the American Midwest where provenance, sustainability, seasonality and ethics trump cheap prices! 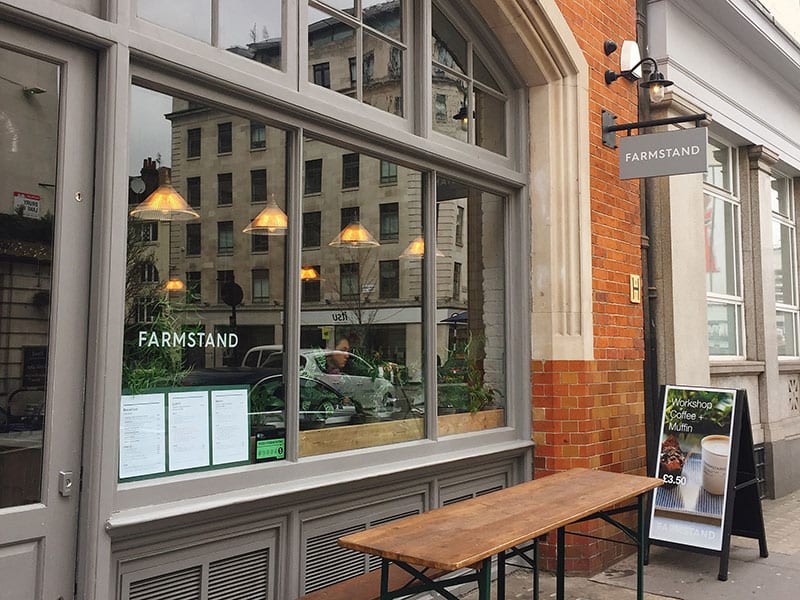 We had hoped to catch the banana bread breakfast but arriving just after 11am we'd already missed it and unexpectedly, for this time of the morning, there was a couple smooching when we walked in. Was breakfast that good?!

Farmstand sells dairy-free, gluten-free, vegan food, all of which is devoid of sugar too; raw cakes (using unrefined sugar) and local sustainable produce so you won't find strawberries here in December! For lunch/dinner you can have 1 main and 2 sides, or 3 sides for £7.50. The mains on our visit were: beef brisket, lamb meatballs, chicken, salmon and aubergine along with sides such as wild rice & quinoa, broccoli, sweet potato and carrots. 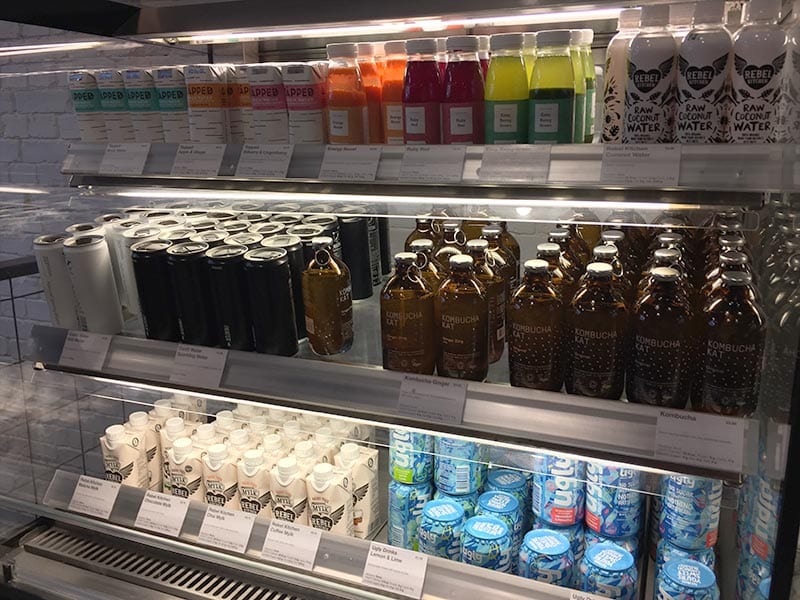 An array of health drinks such as birch water (£3.10), kombucha (£3.95), coconut water (£2.95), "Ugly" water AKA spring water with fruit (£1.75) and vegan-friendly milk drinks (£2.75) are available. We settled on the Kombucha Kat ginger zing and dairy-free matcha green tea "mylk". Kombucha isn't really my thing so I wasnt into it but it smelled and tasted like the real deal. If you don't know what to expect, it has a very sour vinegar aroma and taste. The matcha milk was pretty good and is a favourite in our house. 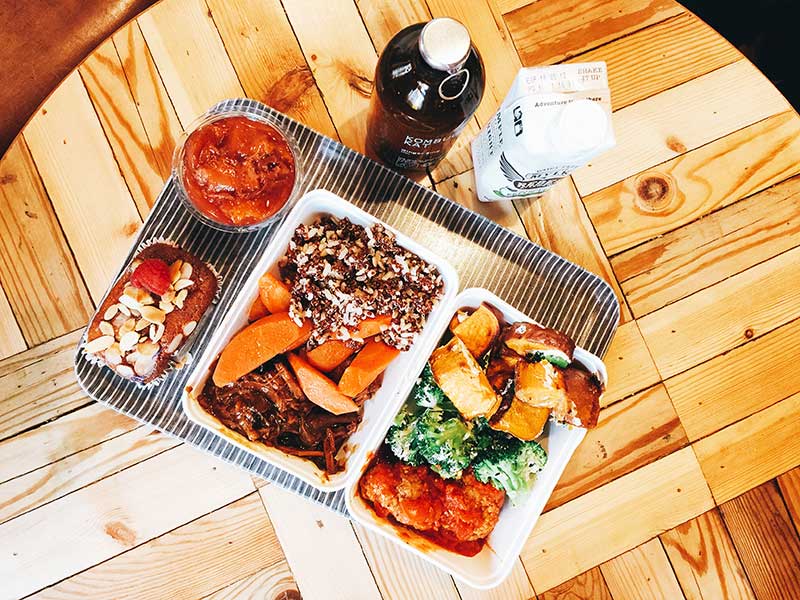 I ate the beef brisket which came apart nicely but was surprisingly salty for a place focused on health but then your body does need more salt than people think. The broccoli was cooked nicely but it was cold, as were the sweet potatoes even though they were both sitting in Bain-Maries. When I enquired with staff I was told that they were supposed to be like that, but why? Is the food somehow healthier that way, given they've already been cooked!? They would've been so much nicer warmed up! 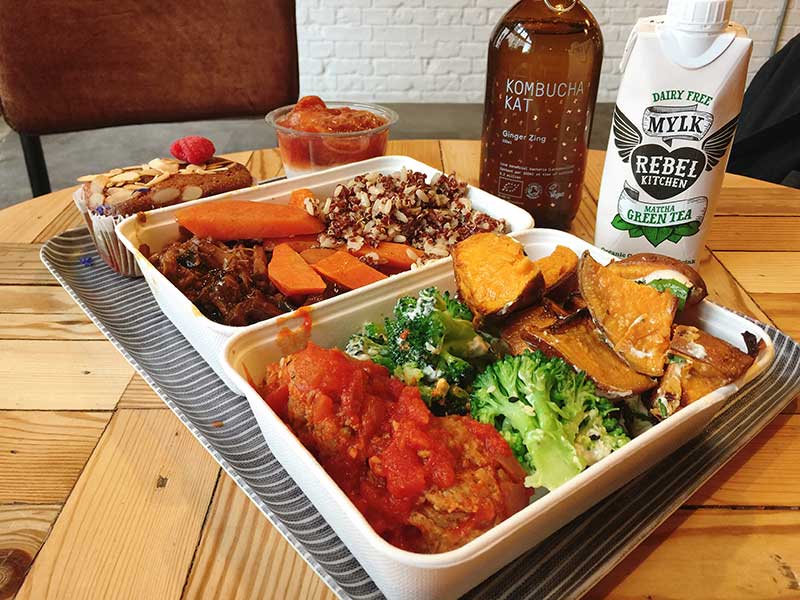 Also on sale are various small salad pots, such as: fava bean, beetroot & tahini, free/range eggs, peperonata & watercress and huevos rancheros (£2.90) and larger pots with mackerel or aubergine for £4.10. 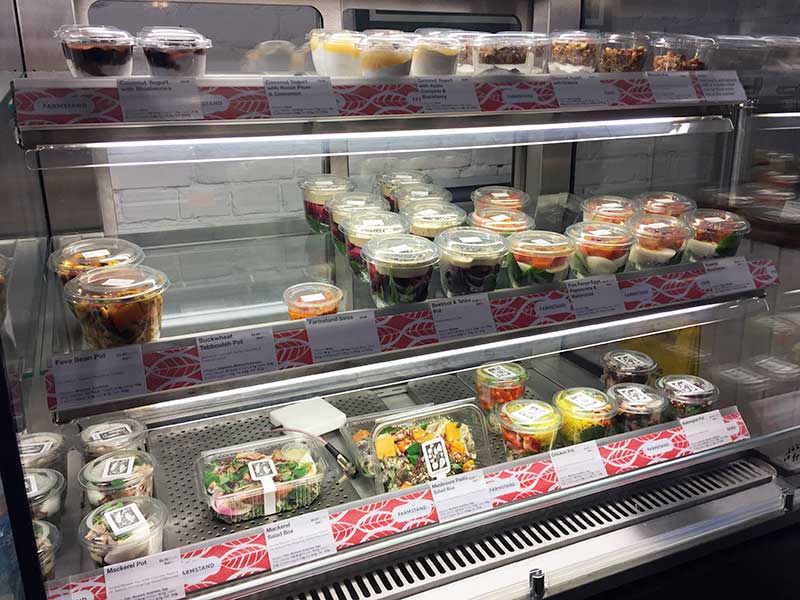 We couldn't resist a bit of cake either. The raspberry and almond cake was OK, perhaps a little dry, prompting staff to recommend the Chocolate brownie instead, which was REALLY good, in fact the best brownie I've tasted for some time - like velvet on your tongue! It seemed apt to wash this down with caffeine and they do coffee & muffin deal for £3.50 with the choice of almond milk, oat milk or organic cow's milk (possibly the only dairy they sell?) and it was good strong coffee just the way I like it. 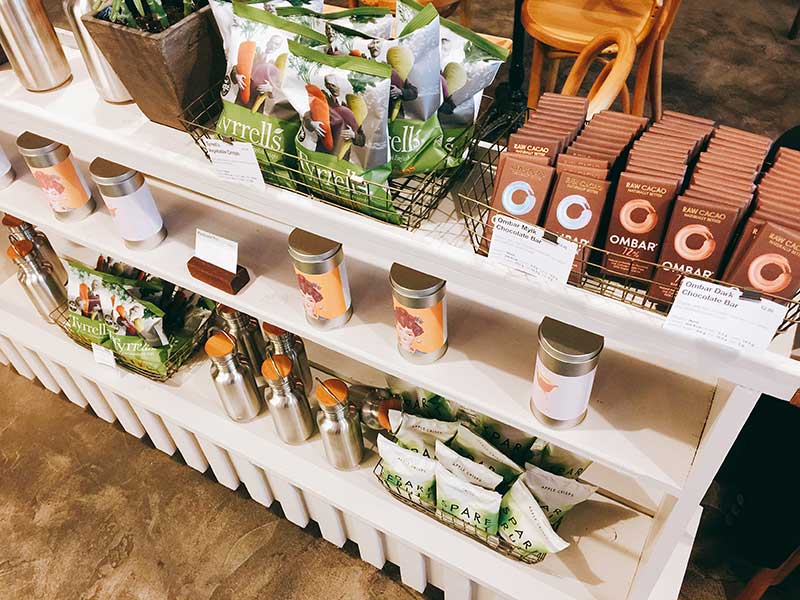 Surprisingly they're licensed too but then wine probably is the world's oldest health drink! Wine is £5.99 a glass or £19.99 - £24.99 for a bottle. Sadly none of the wine is English but it is from a local supplier with a couple of bottles being organic. The beer on the other hand certainly is local, coming from London breweries such as Crate Beer in Hackney Wick and Beavertown. They had Crate lager & pale ale (£4.50) and Beavertown Neck Oil IPA (£4.75) on our visit.

They sell veggie crisps, dairy-free chocolate and other healthy snackage for taking away, as well as sturdy, refillable milk container-styled water bottles. 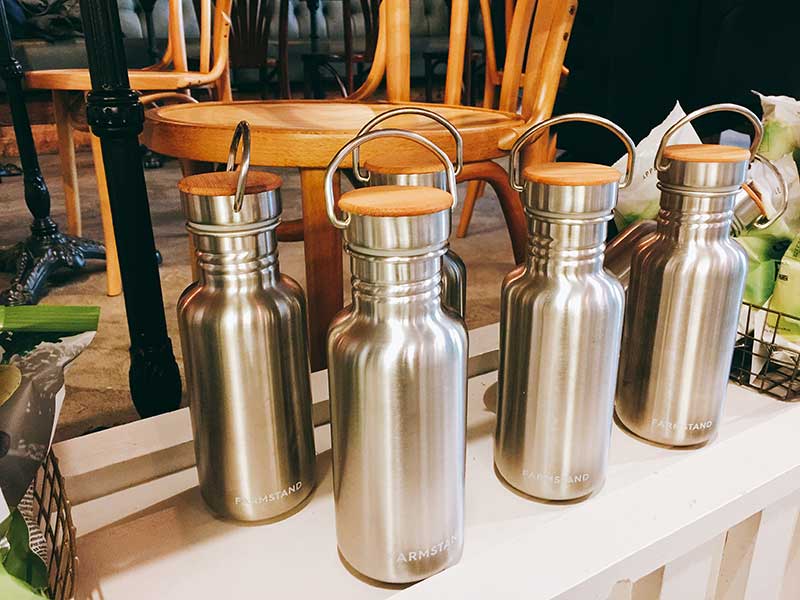 Food was dished up quickly, staff were helpful and prices weren't extortionate which is always my fear with places like this. If you're looking for somewhere with morals, somewhere environmentally-friendly or just after fast but healthy food in, or around Covent Garden then Farmstand could be the place to head to (they do deliveries too!).

Although their website mentions LCD Soundsystem, the soundtrack on our visit featured 70's/80's rock including The Clash, Midnight Oil, AC-DC and Boston.

Toilets are downstairs and were clean and tidy with lemon soap and moisturiser.

- Why is the sweet potato and broccoli cold?

Disclaimer: We were kindly invited in to sample some items from the menu at no cost to ourselves but Fred vouches that this is a true review, even if they don't sell the sort of food he likes to steal from our plates.

« Masterchef: The Professionals 2016 winner Gary Maclean at The Best of the West Festival
A peek inside the New Innis and Gunn Beer Kitchen on Ashton Lane »