Got the quay, got the secret to Leith's newest eaterie

We wrote about the latest addition to the Leith food scene Season Quayside a month ago, and more recently we were lucky enough to be invited in to try the menu ourselves.

Picture the scene, arriving a bit late for our planned booking but it was still daylight outside, but not long after arriving it darkened and then the rain came lashing down. We were cosy and content and glad we made it in just in time, seated in the conservatory area of the new restaurant, which opens from 10 am at weekends for cakes and scones, and from noon Wednesday - Friday serving lunch through to dinner (with an early close at 4 pm on Sundays). 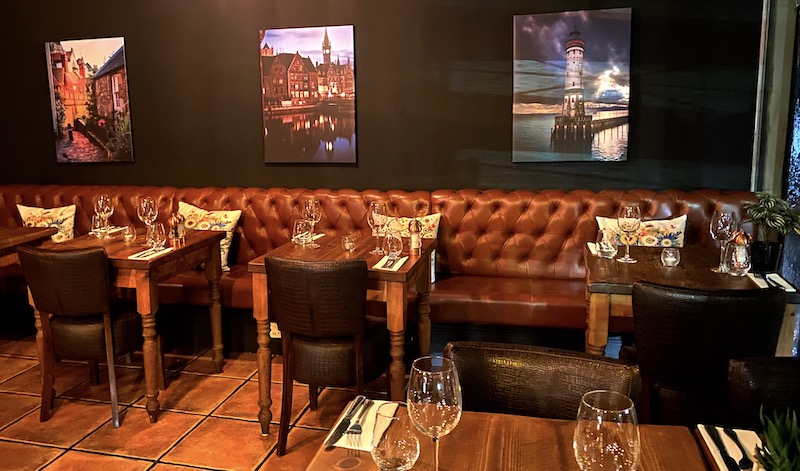 The restaurant has quite a traditional look, compared to all the stripped-back industrial, hipster places we often find ourselves in, which is a refreshing change.

The menu on our visit featured an eclectic mix of sharing dishes, burgers, pizzas, chargrilled meat and tacos. Vegan and vegetarian options are available on request. Desserts are listed on the second menu below.

Cocktails are one of the attractions of Season Quayside. From popular spritzers and long drinks to negronis and unusual concoctions like the 'Mexican Goddess' comprising Tequila, roasted lime juice, agave syrup, egg white and Malbec(!) and 'Nut Just Espresso' made with whisky, Frangelico, vanilla sugar espresso and crushed hazelnuts. They can also make bespoke drinks on request. Mocktails are available too, starting at £6.50 while the alcoholic ones are around the £9.50 - £10.50 mark. 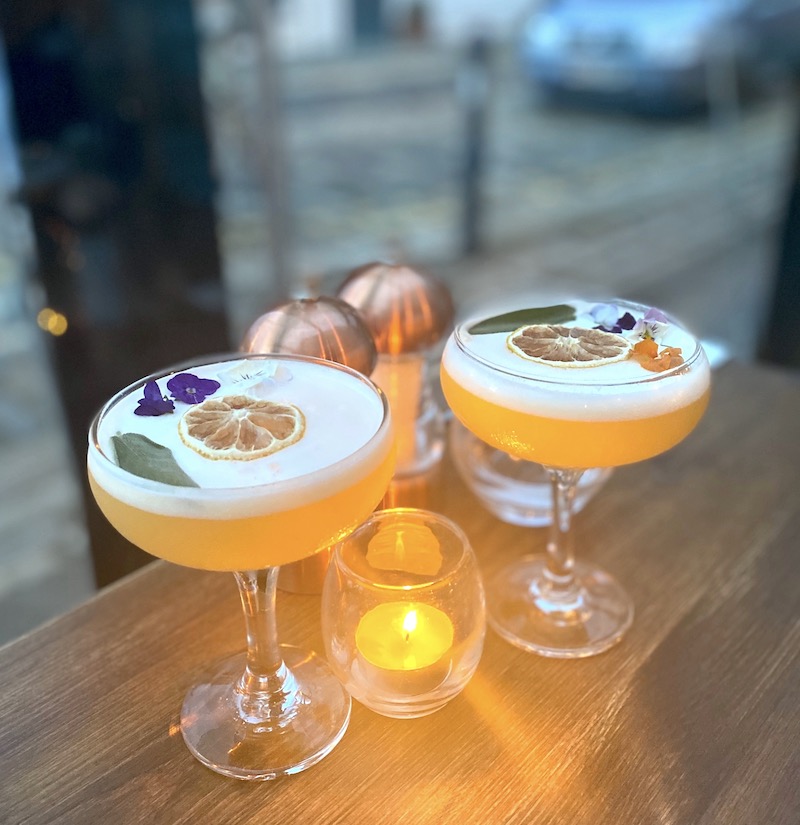 We each began our night with the Sour peach, which is Roku gin, vanilla sugar, peach puree, lemon juice and egg white, topped with a dehydrated lemon slice, nasturtiums and a sage leaf. A cocktail that looks beautiful and tastes great too: citrussy with soft, smooth foam. 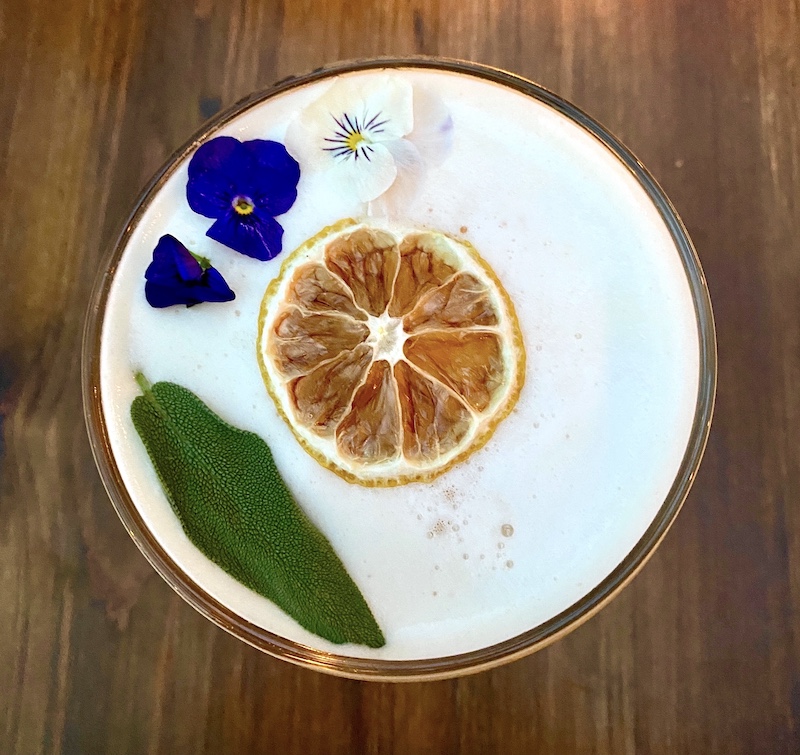 We also had a glass of the Picpoul and the draught lager and IPA from the Moonwake Brewery, which is located only a few streets away so the beer doesn't get much more local and fresher than that!

Out first courses were quick to arrive, beginning with Smoked Haddock Chowder. 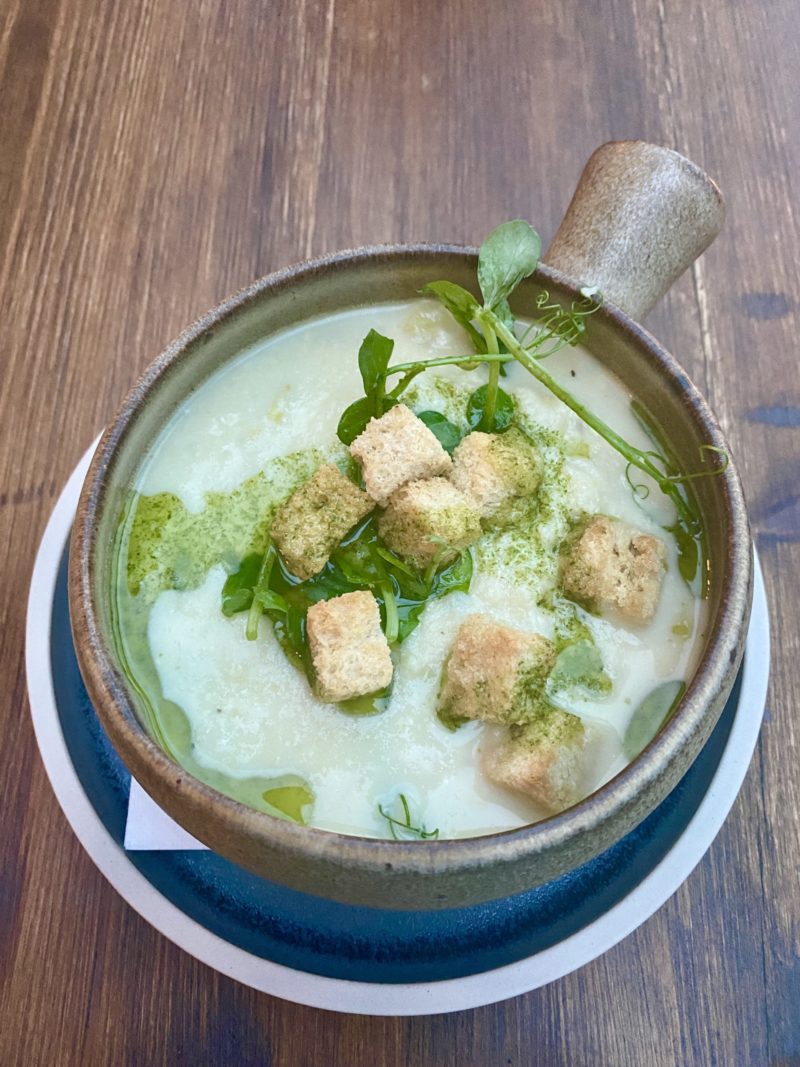 It was piping hot with chunky croutons, a dusting of dill and a herby oil so a very green, healthy-looking thick soup full of smoked haddock. 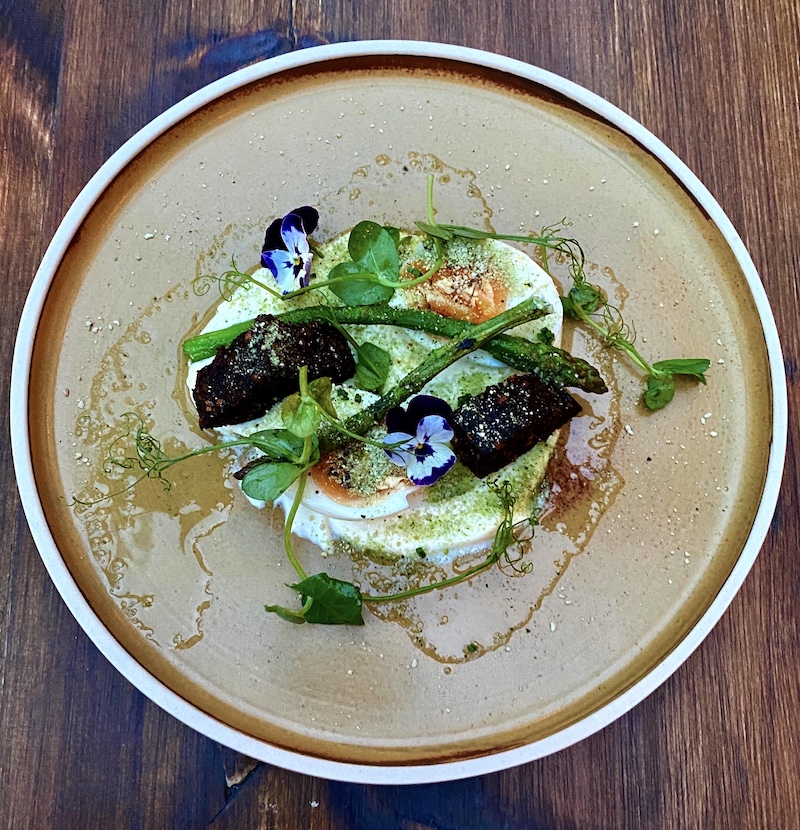 Mrs Foodie ordered a salad since she was going big and meaty for her main. This was was a well-executed, colourful salad that was full of flavour and texture, so something that had been put together with thought. 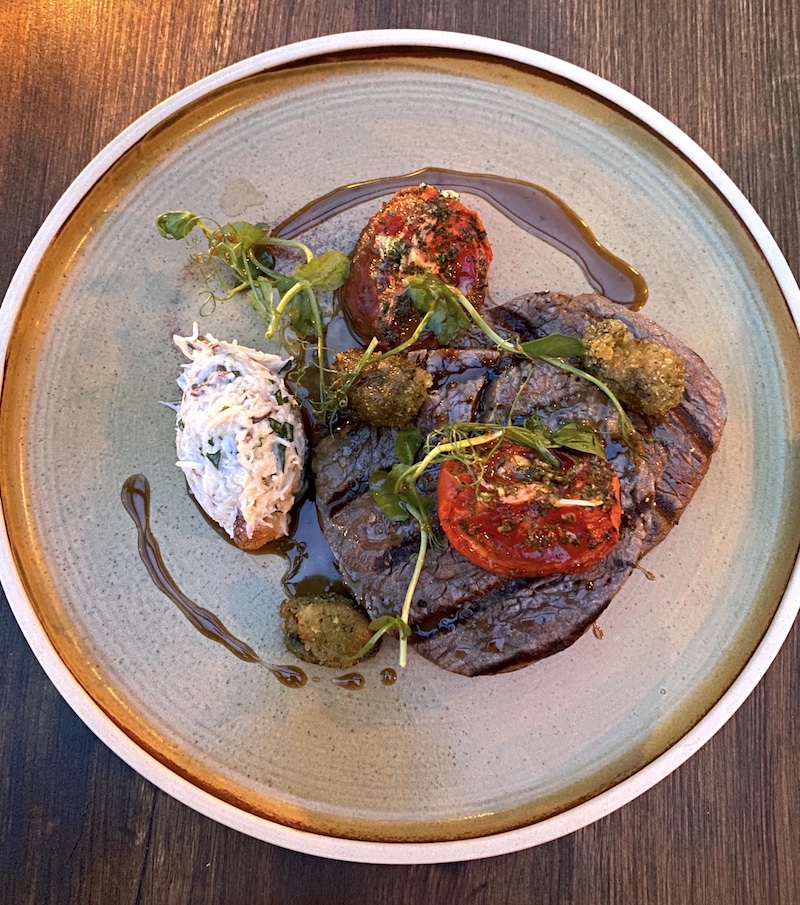 The day's special - surf and turf

On special, during our visit was a tweak on surf 'n' turf and what swung it was the inclusion of crab and mussels rather than the expected prawns. A succulent steak cooked pink with a sort of crab remoulade. Very tasty and very filling. 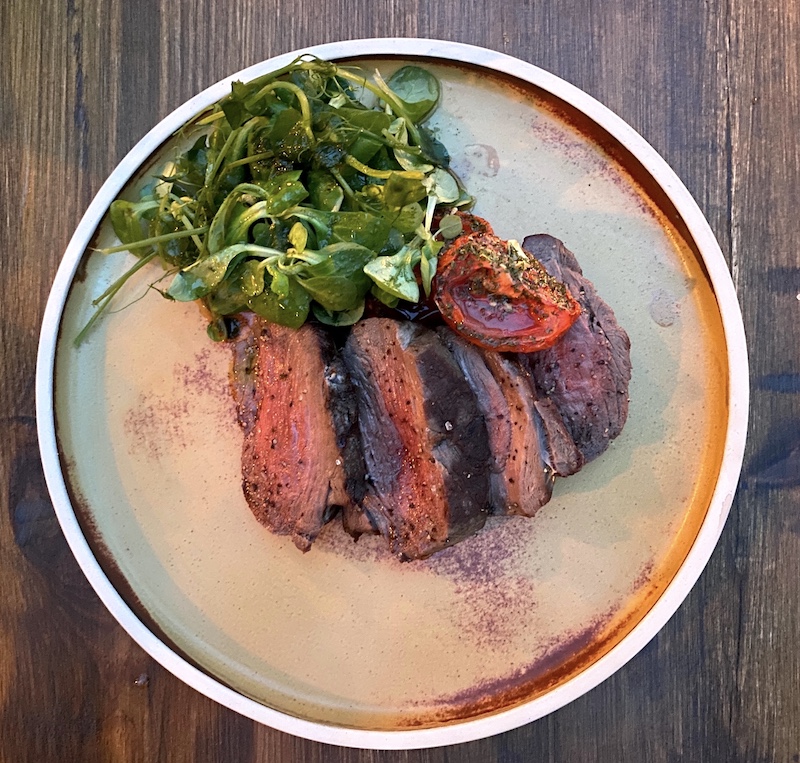 It's been a while since we've eaten deer and so with Mr Foodie also wanting to try one of the chargrilled prime butcher cuts, he opted for the haunch of Kingussie venison, coming in at 8 ounces, cooked beautifully pink and nicely seasoned. It was also another hefty feed so he was also stuffed afterwards. 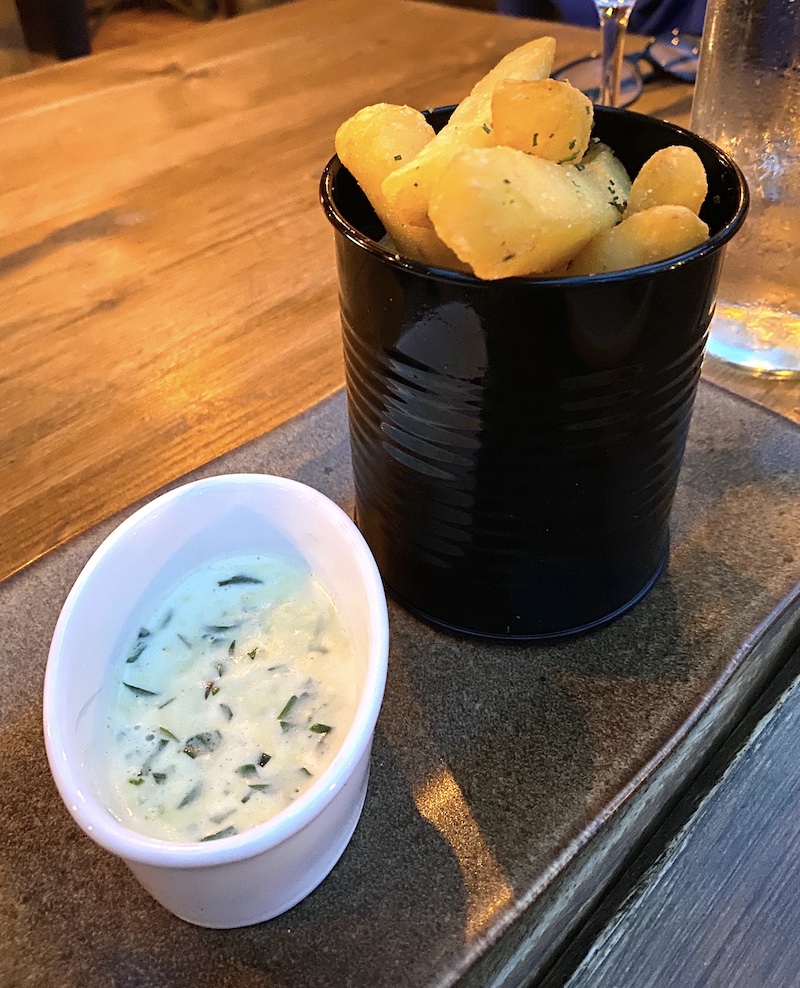 Side of truffle and chive chips with the main course

Along with the venison, came a side of truffle & chive chips and a truffle & tarragon sauce (included in the price). Seasoned chips, baby garden potatoes, seasonal market vegetables and market greens are also available. As is chimichurri and a red wine jus for the included sauce option.

We were both pretty full but don't like to turn down pudding so onwards and upwards... 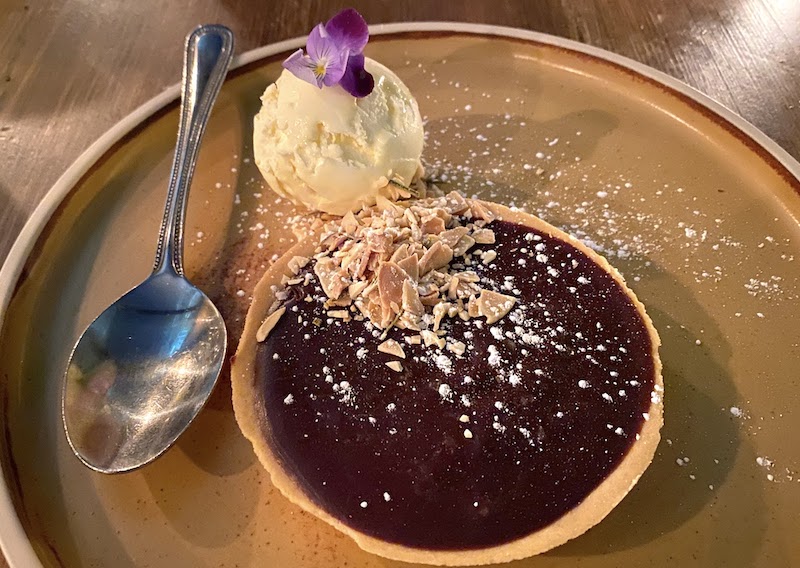 Right up Mr Foodie's street. A firm homemade-looking tart filled with smooth dark chocolate and topped with crushed almonds. A really good tart to finish to the meal. Also on the plate was a ball of cream but we would've preferred ice cream or sorbet. 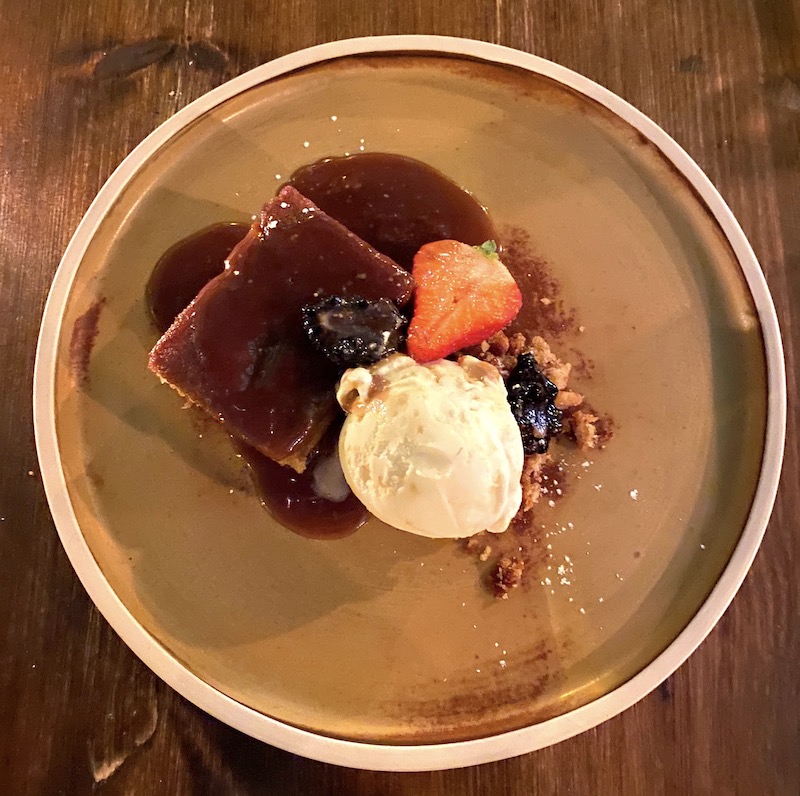 While banana desserts are always up Mrs Foodie's street and this was certainly big on banana taste but we would've like to taste more ginger. The tablet ice cream was as expected - really sweet!

Season Quayside is an excellent addition to the food scene in Leith. From the welcoming staff to the interesting mix of food, great cocktails, wine and beer selection and delicious puddings. We left with full bellies and would happily eat here again.

Considering that they have not been open long, the service was friendly and attentive throughout. It's somewhere we feel that will become popular with locals and should see regular repeat custom, but if you're travelling from further afield then it's definitely worth a visit. Toilets are at the front of the restaurant on Commercial Street and were in clean, working order. There is also an entrance from the conservatory side.

There is a step in the restaurant between the front and back. If you have mobility issues (please let staff know when you book) we would recommend entering from the door on Commercial Street as this is the side the toilets are on. Disclaimer: we received a complimentary meal for two.