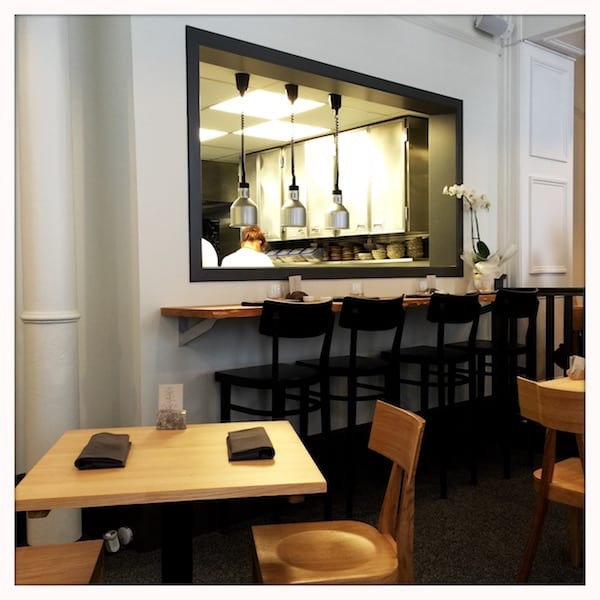 The most impressive new restaurant in Scotland!

Years ago we remember camping beside Loch Ken and discovering that only a few miles down the road in the village of Crossmichael was a Michelin-starred restaurant. At that time we didn’t have the cash for such exquisite food and so dinner amounted to a chippy from nearby Castle Douglas (but it was very good if we recall!).

That restaurant was the Plumed Horse, which a few years later re-located to Leith, lost its Michelin star then regained it before eventually losing it again. We walked past it on many an occasion but never made it in. Some staff  left to open the wonderful Field, then deals for the tasting menu at The Plumed Horse  became a frequent feature in my inbox. A couple of years later and the Plumed Horse was no more. 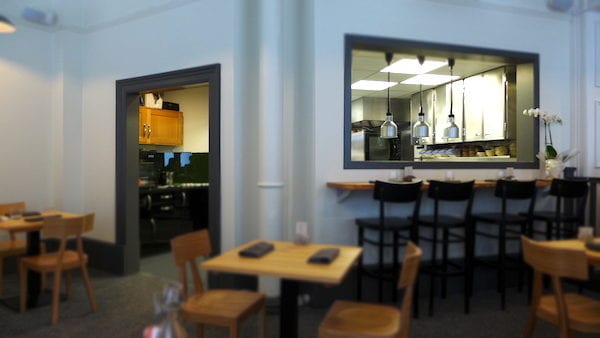 Norn takes over the space vacated by that well-regarded restaurant; opening here would probably put most people off but not chef-patron Scott Smith, who previously worked under the tutelage of Michelin-star chef Geoffrey Smeddle at the Peat Inn in Fife.

Scott is assisted by his wife Laura and wine sommelier Sandro Colavolpe, together they work wonders. The restaurant feels Scandinavian, in fact, "Norn" was a form of Norse once spoken in Orkney and Shetland. There are no doors or windows separating the kitchen from the restaurant, so if you really want to watch the chefs in action there is counter seating - while uncommon in Britain we visited a few counter restaurants in Japan earlier this year. 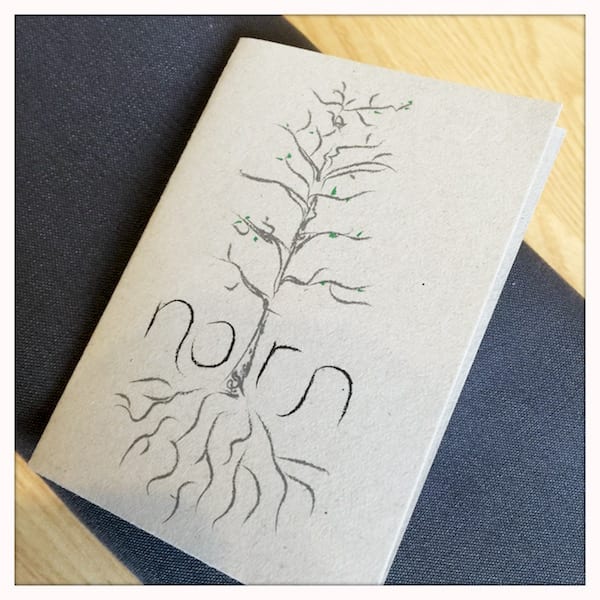 The menu is pocket-sized and designed to be taken away. The dishes change regularly, not only with what is in season but with what is abundant and what the chefs themselves have foraged meaning you always get fresh and sustainable food. 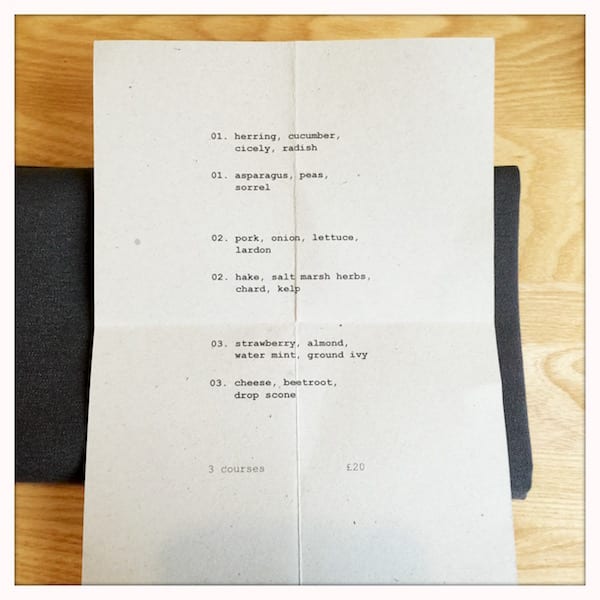 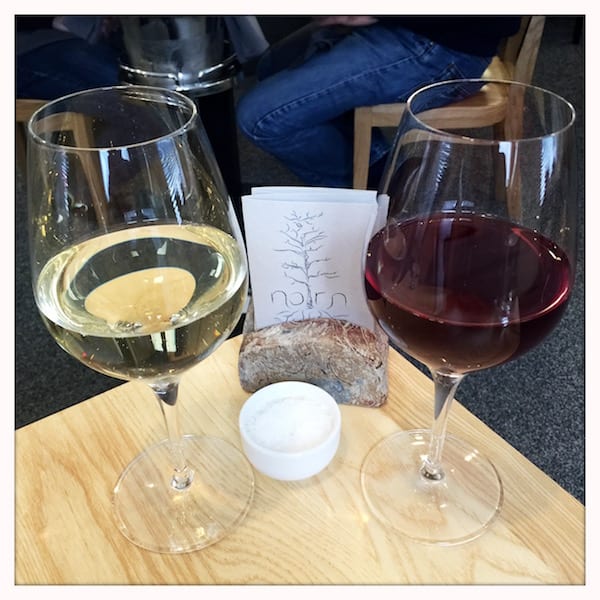 All the wine comes from artisan producers with prices ranging from £6 to £9.50 for a 175ml glass. Emma went for a glass of Jo Landron Amphibolite 2014 (£8.50 for 175ml or £34 a bottle), a low-alcohol (11%) muscadet from the Loire valley (a favourite of hers) and I had a Radford Dale, Thirst gamay 2015 (unknown cost for 175ml or £30 a bottle), which is probably the first South African gamay we've come across. It was very fruity with a strawberry liqueur /cherry Tunes aroma and a light cherry & blackcurrant taste but not overly sweet with a soft warming mouthfeel despite the relatively low alcohol content (11.5%). The beer selection is also surprisingly good with bottles from Wild Beer, Beavertown and Burning Sky etc. Soft drinks from Edinburgh-based Roots Soda are available and the tonic is from Walter Gregor. 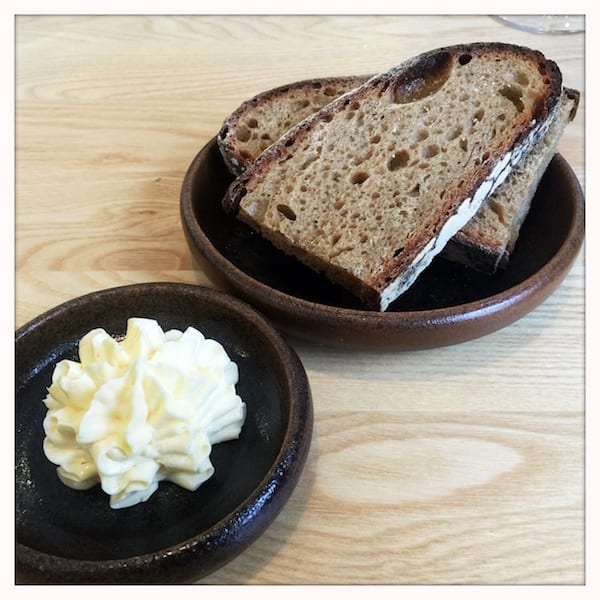 Homemade beremeal sourdough with 10-day old butter  was brought out first. Beremeal is an ancient form of barley that is only milled in one location, Barony Mills, in Orkney. It's a favourite of the Slow Food movement in Glasgow so we've had it a few times in various formats (blinis etc). Both bread and butter were delicious. 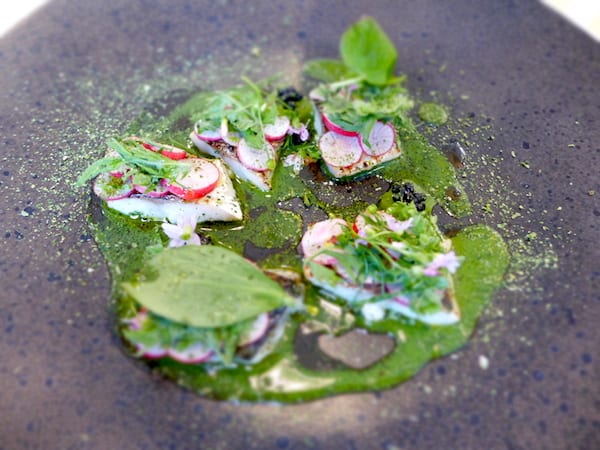 Then the starters arrived - unlike typical restaurants, it is the chefs themselves who bring out the food and explain each dish - an excellent touch should you have any questions about the ingredients or cooking methods. The herring dish was very colourful, aided by bright pink radish and green cucumber and cicely beside the skin of the fish. It was so fresh and healthy tasting. The crockery was also rustically stylish! 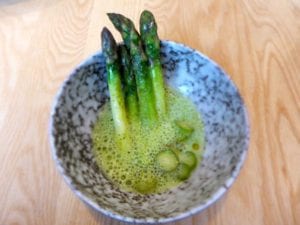 Mmm new season asparagus. We have a bit of a love affair with Germany, making repeated trips there and getting in on the action of white asparagus season (which is a big thing over there!). Had any Germans been in the near vicinity and known there was fresh asparagus on the menu they would've formed an orderly queue I'm sure! This again exuded freshness and was devoured quickly! 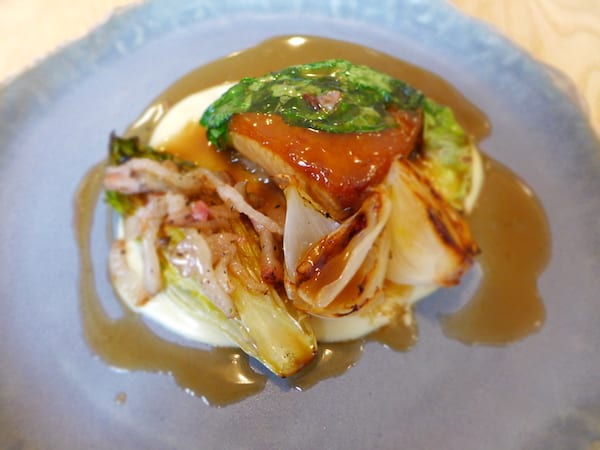 Pork jowl cooked overnight with onion, lettuce and lardons. A fatty cut but melt-in-the-mouth and full of flavour. Unlike the healthy green starters this was more like comfort food but without the greasiness or excess salt you might find in other establishments. 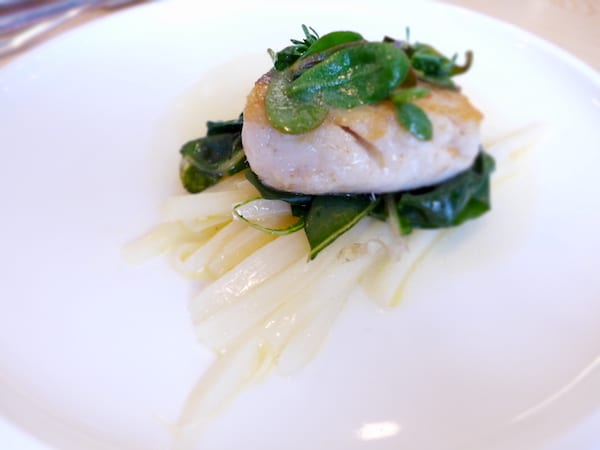 Roast hake completed the mains - a small but meaty slice of fish with pickled chard and a mustard taste lurking in background. It was lovely! 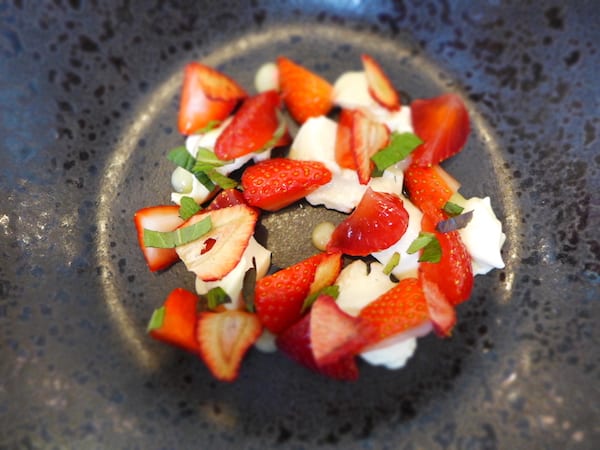 Strawberries 3 ways - fresh, dried and poached, sprinkled with fresh mint mixed in with slices of a very light-tasting almond panacotta. Sometimes it's hard to beat the simple things in life, as with the bread and butter earlier, and these Scottish strawberries were fresh and full of flavour. 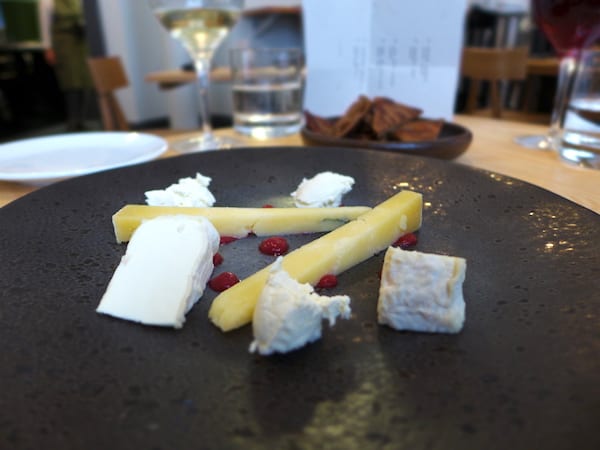 Lastly, cheese served at room temperature with beetroot dollops - sweet with a discernible beetroot tang but not full-on earthiness. This came with malted beremeal drop scones - like a potato scone/pitta bread which was homely and enjoyable.

Spying bamboo tea on the menu I had to finish my meal with a cup of this - despite 3 trips to the far east I'd never come across it before. It was a pale green colour with a surprising malty Ovaltine aroma. 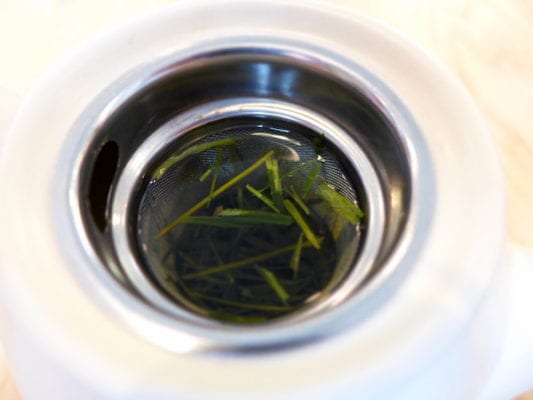 I think you'll struggle to find negative reviews of Norn, it's the most exciting new restaurant we've come across in Scotland recently. The food is simple but refined, the atmosphere pleasantly relaxed with some chatter in the background and, unusually for a restaurant like this, the soundtrack was provided by the Rolling Stones.

We found that their unusual approach to service worked very well and the toilets were clean and spotless but if we were to criticise anything it would be that like many other fine-dining restaurants the courses are small however they were more than happy to ply us with more bread and butter.

The courses are also like the Gannet and the Ox and Finch in Glasgow in that, to my tastes, they are under-seasoned but that hasn't done the Finnieston restaurants any harm, especially with regards to Michelin recommendation. The lunchtime desserts might lack complexity for some so we're keen to experience dinner for comparison.

We did find a few other wee non-food (and very pedantic) faults such as repeated songs on the Rolling Stones playlist and whisky is listed as "whiskey" on the menu despite not listing anything from the U.S. or Ireland but this is hardly worth mentioning (but I've done it now!). 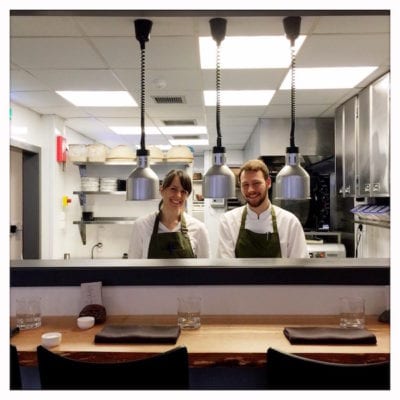 Earlier this year we visited two Michelin-starred restaurants in Japan: Chihana and Gion Nanba which, surprisingly to us, lacked a lot of the things we're used to seeing in high-end restaurants in the UK. They focused simply on well-executed fresh, seasonal food and if they are worthy of Michelin stars then Norn is too, absolutely, just wait and see.

TL;DR
+ fresh seasonal produce
+ chefs bring the food to your table
+ all/most wines are sustainable and organic
+ impressive crockery
+ As good as, if not better than a 3 Michelin-starred restaurant we recently visited in Japan

- the lunch courses are small
- lunch desserts a bit basic

Disclaimer: We were invited to lunch courtesy of Norn but Fred vouches that everything written is true, and that the food really is better than a bag of Dreamies®.