January is a cold dreich month, so when I was invited to An Audience with Nick Nairn at the Double Tree by Hilton Dunblane, I jumped at the chance. The Dunblane Double Tree is a great place to escape those winter blues and the opportunity to try some of Nick's signature dishes made it all the better. 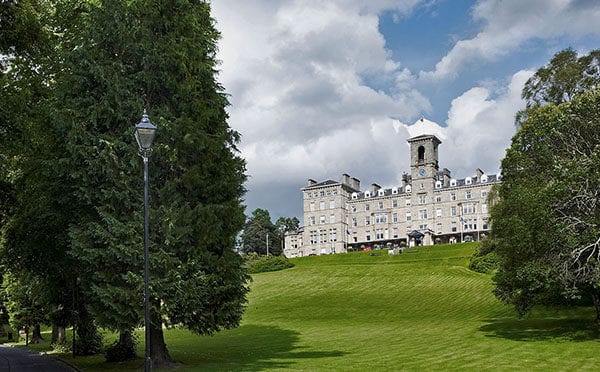 This was not a personal audience, but rather a special event laid on to celebrate Mr Nairn's 30 years as a chef. For those who don't know, Nick Nairn was the youngest Scottish chef to be awarded a Michelin Star. A remarkable feat as he never formally trained as a chef. He went on to hold his star for 10 years, which is the real proof of the pudding. 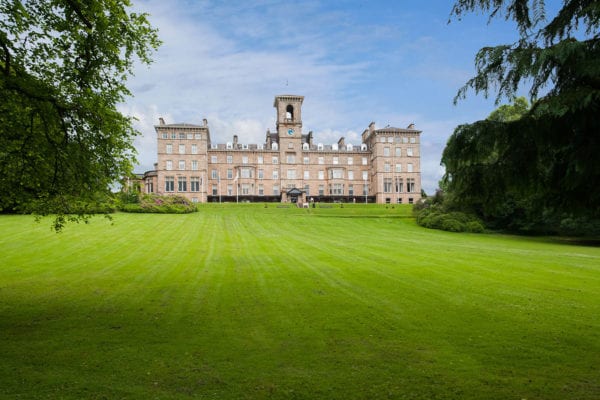 Arriving at the Dunblane Double Tree is an impressive affair. The building sits proud on the hillside clearly letting you know that it is not just a hotel, but a grand hotel.

Checking in was quick and pleasant. Within moments we were headed upstairs clutching our complimentary chocolate cookies.

Our room was small but nicely appointed on the corner of the building. The two windows gave us lots of natural light and two lovely views. As would be expected all the bits were there: TV, toiletries, phone, dressing gown, slippers, iron and ironing board. 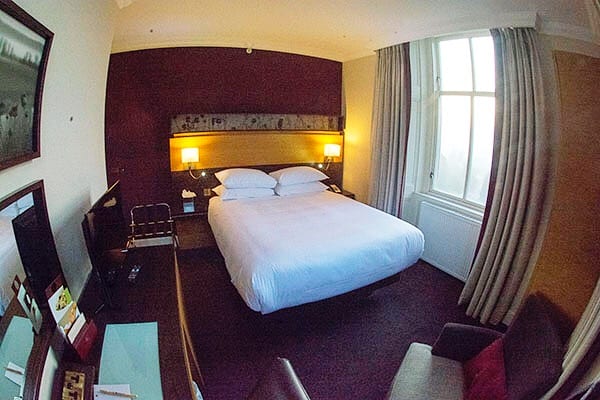 Tea and coffee making facilities are provided. There is no minibar but that is no bad thing. Why pay extra when there is a splendid bar downstairs and no problem retiring to your room with a glass of something. WiFi is available at £9.99 a day, free for HHonors members...so fill in the form and save a tenner. I was happy, and more importantly Pl, the missus, was happy!

The Dunblane Double Tree has a bit of a history as a Hydro, so no surprise that it has a 17 meter pool, gym and well-being centre. Couple that with local golf courses, the pretty town of Dunblane and the beautiful Stirlingshire countryside and you can see why it has been has been a resort destination for over 100 years.

We were here sampling a package that included dinner with Nick Nairn for £49.00 per person with the option to include bed and breakfast at £199.00 for two. The Dunblane Double Tree have a constant stream of offers and deals,  so check their website regularly.

And so to dinner. The hotel's restaurant is The Kailyard by Nick Nairn, so no surprise that he should choose to have his 30th celebration here. The evening began in the Wallace Suite, a generously proportioned and elegant room, with a welcoming glass of fizz and some tasty canapés. The beef with horseradish was my favourite. We then adjourned to the ballroom, over 100 of us, and settled down for dinner accompanied by a chat from Nick hosted by Stephen Jardine. 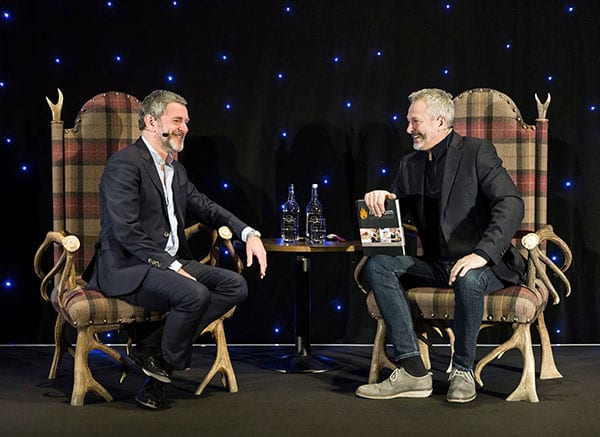 Despite coming from a comfortable background, Nick was a man with no onions. Or at least childhood held no memory of anything as sophisticated as an onion! Home cooking was plain in the extreme. School was no better with Nick admitting his experience of school dinners was enough to put him off food for life. Nick's culinary epiphany came in Singapore when he first tasted Chicken Satay. Food came alive with colour and Nick became a foodie. And after a few hard knocks, a Michelin Star chef. 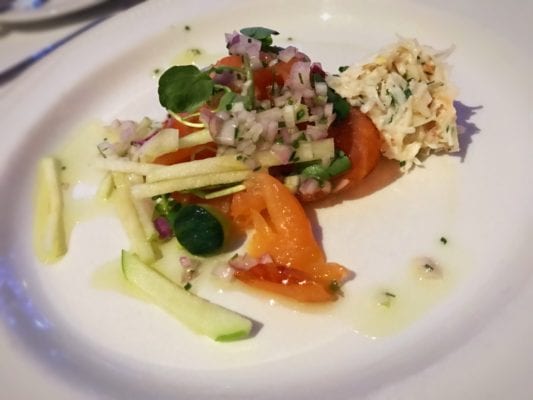 We started with "Nick’s Original Cure-Smoked Scottish Salmon Served with Gourdon crab meat, pickled cucumber, apple and watercress salad, and shallot, lemon and parsley dressing." The smoked salmon was lovely, not at all oily, it had the dry clean taste I associate with Sheildaig smoked salmon. The apple and crabmeat mix would work well on its own and gently complimented the salmon. The lemon dressing added a tang and stopped the apple browning. You can find the smoked salmon recipe online on Campbell's website who also supply Nick's smoked salmon. 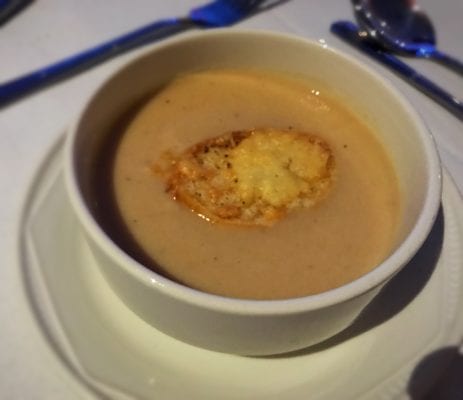 Cauliflower soup can be a bit hit or miss, and the smoked salmon was a hard act to follow. No need to worry here though. There was just the right amount of cheese in the "Cauliflower Velouté Served with Mull cheddar croute" to smooth out the cauliflowers' rough edges, while the toasted croute let you know what Mull cheddar is capable of.

Nick was asked which chef he admired most. A tricky question in a world awash with culinary prima donnas. He named two: Marco Pierre White because of his technical expertise and, Paul Rankin because of his understanding of food. An artisan and an artist, not a bad balance. 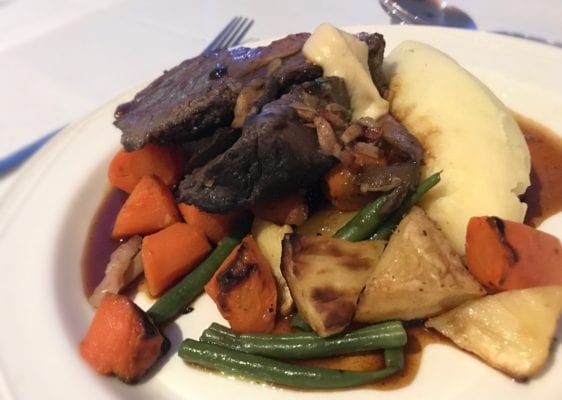 The main was another of Nick's signature dishes: "Slow Braised Daube of Scotch Beef Served with butter mash, truffled celeriac, roast roots, pancetta and wild mushroom gravy." This was melt in the mouth stuff. Sweet and very very tender. And a generous portion too. The vegetables were lovely. A great plate. There wasn't a leftover in the house.

Daube refers to a French slow cooking method traditionally used to tenderise cheaper cuts such as shin. The method is named after a daubière; a type of braising pot. On this occasion we were treated to Ox Cheek. Not perhaps your first choice of cut, but once tasted you will try it again and again.

Dessert was "Malt Whisky Cream with Macerated Berries Served with kaffir lime leaf syrup and caramel sauce". A nice pudding, but then its hard to go wrong with fruit, cream and whisky. It avoided heaviness of many whisky cream desserts and made a great ending to a very enjoyable meal.

The evening carried on with live entertainment and a very late bar. 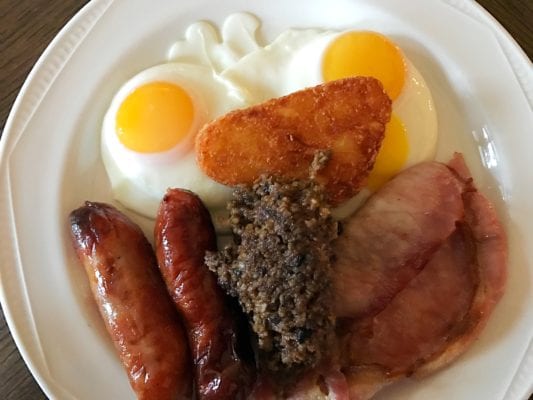 One of the best things about being away from home is having a cooked breakfast without any effort. So I was off downstairs with the early birds to see what porky delights were on offer.

Breakfast was served in The Kailyard dining room and took the form of a buffet. I have visited bigger buffets, but this was ok. All the essentials were there, and all in nice condition. Not a shrivelled sausage in sight. Pl had the fruit and yogurt which she found very nice while I went for the full Scottish. Tea and toast were plentiful and there was a selection of cold meat and cheese as an alternative. No kippers or smoked haddock, but better not done than done badly.