Kelvingrove Art Gallery and Museum is Glasgow's most popular place for a day out (especially on a rainy day!), attracting well over a million visitors every year and making it the 3rd most popular visitor attraction in Scotland and the 13th in the UK. Opened in 1901 it was partly funded by the success of the International Exhibition of 1888 and there was another exhibition in 1901 to coincide with the opening of the new gallery and museum space. During the exhibitions of 1888 and 1901 temporary buildings around three to four times the size of the current museum stood here and nearby as well.

In 2006, following a three-year refurbishment at a cost of a cool £28 million it re-opened to the public and I must confess that aside from attending a private function at night I hadn't been back in that time, which considering I live in Glasgow and entry is free (donations are gratefully accepted) is pretty poor!

If you've never been to Kelvingrove, it was built the wrong way around and the architect was so distraught when he found out that he climbed to the top and committed suicide! Actually that's not true at all - just an oft-repeated urban myth, the building was built the right way round, it's just that the main entrance happens to be on the opposite side from the main road (Argyle St) but take a look at this map on the National Library of Scotland website to see why the entrance is at the "back".

Onto real trivia - there are 22 themed galleries displaying 8000 objects with collections of work from Charles Rennie Mackintosh, French Impressionists and Dutch Old Masters.

The west wing - animals and aeroplanes 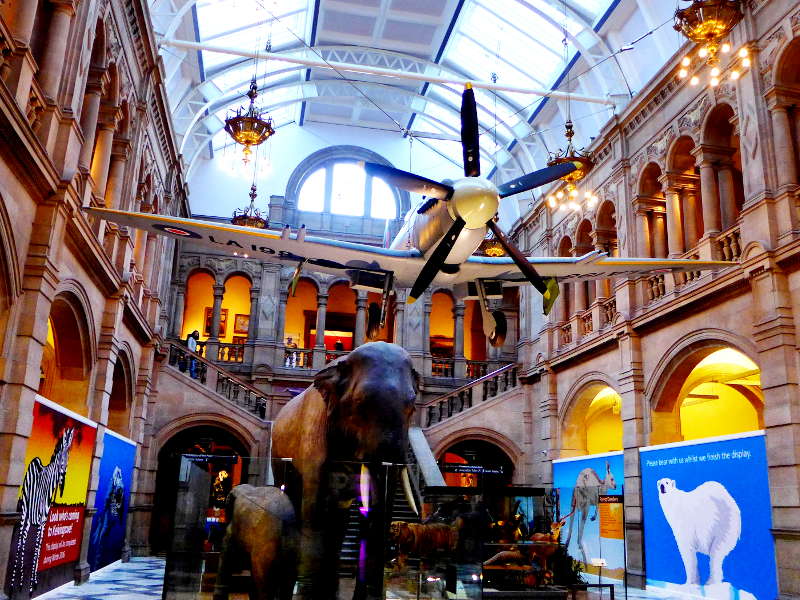 In the west wing (AKA the Life Gallery) you will find Sir Roger the South Indian, or possibly Sri Lankan, elephant. He is one of the oldest and most popular exhibits on display. He has an interesting history, being part of a travelling menagerie which toured Britain before retiring to a zoo. At around 27 years of age he developed a condition known as musth, which causes testosterone to increase by up to 60 times and can lead to bad temper and aggression, which it did in Sir Roger's case, causing him to attack zoo staff and hospitalise his regular keeper! To prevent further injury to staff or the public a decision was made to put him down, and if you look carefully you can see a bullet hole (I'm not telling you where though!). Sir Roger is so big that when he was stuffed the shop front of the taxidermy had to be removed to allow him to exit and during the refurbishment work from 2003 - 2006 he stayed where he was, while all the other works were removed for safe-keeping. Another interesting tidbit is that the tusks aren't actually his!
You can read more about Sir Roger in: The Afterlives of Animals: A Museum Menagerie.

Hanging overhead you'll find a Spitfire MK 21 plane built in 1944 and in action from 1947-1949, it did not feature in WWII as one might expect! It was restored in a joint project between Glasgow Museums and the National Museums of Scotland and was originally on display in Glasgow’s Museum of Transport. 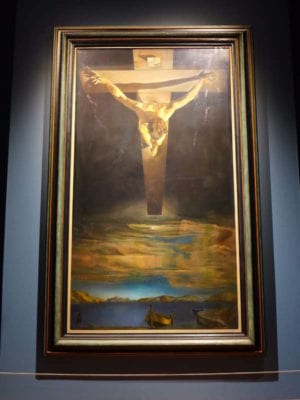 Similarly another exhibit which used to be elsewhere is Salvador Dali's Christ of St.John on the cross. It was once housed in the St Mungo Museum of Religious Life and Art, and also used to hang forlornly in a corner in Kelvingrove. Today, it has been given its own private room where people can spend a quiet moment with the artwork. Painted in 1951 and purchased by the Glasgow Corporation just a year later it has always been a controversial acquisition, it was a costly purchase considering the money could've been spent supporting local/Scottish artists, but with the painting came the intellectual property rights and it's now worth much more despite two vandalism attempts, one of which resulted in the canvas being torn. A successful repair job took place and now the damage is only visible from certain angles.

The East wing - where creativity reigns 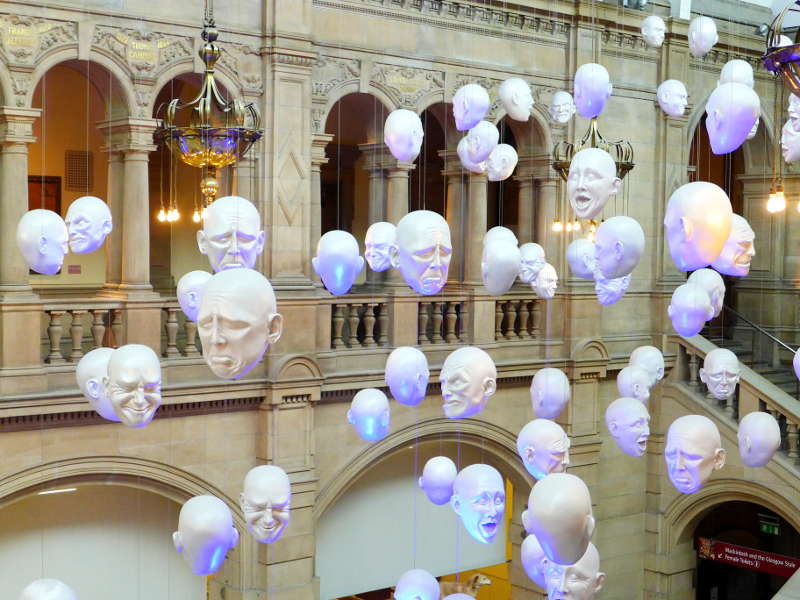 The heads in the east wing (AKA Expression Gallery) may be one of the most photographed things in Kelvingrove but they aren't even an exhibition, they're just there for decoration to counterbalance the spitfire in the opposite hall! If you go, try counting all the heads and the number of different facial expressions.

If you've never been to Kelvingrove you're missing out on one of Scotland's top visitor sites. Unfortunately I only had time for a one hour tour of the main attractions (a mere fraction of the museum's contents) but there's enough to keep you occupied all day or entice you back for repeated visits. There are also plenty of great cafes, bars and restaurants in the Yorkhill/Finnieston/Partick area.

For more info about Kelvingrove, head to the Glasgow Life website here.

Many thanks to GCMB for inviting me on the tour to help promote the #PackMoreIn campaign. Tours of the museum are free - simply enquire at the Centre Hall Enquiry Desk.