Five Stars for One Star!

One Star House Party isn't a house party and even if it was, it wouldn't stay for too long in the same location. No, this is a travelling pop-up restaurant on the road for 20 months, visiting 20 countries and popping up in 20 different places.

The old Ketchup Southside at 1179 Pollokshaws Rd in Shawlands is the latest venue for the travelling restaurant after visiting countries such as China, Vietnam and Nepal. The chefs at One Star House Party have now returned home, eager to share some recipes they picked up in each country along the way! 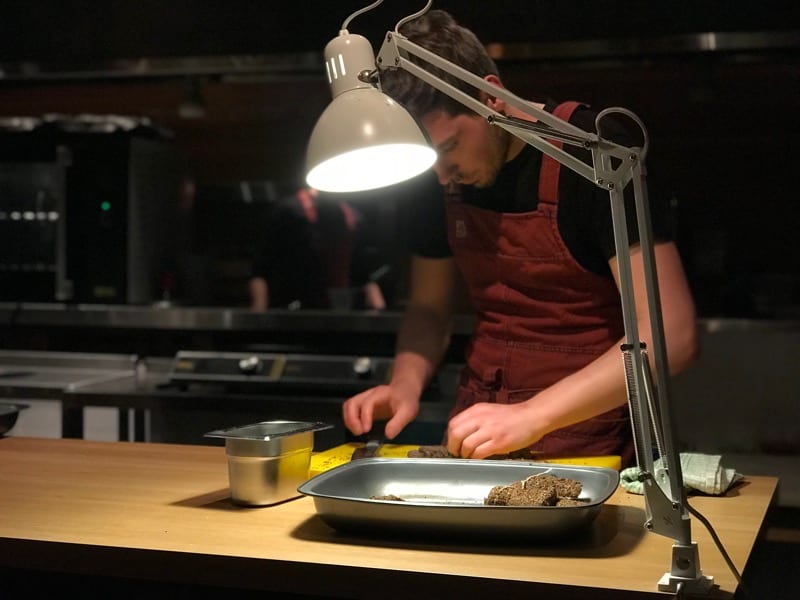 It was a cold dark night outside but inside the busy One Star kitchen brought some much-needed warmth to this neglected southside site.

To begin the 7-course journey we started with bread inspired by Oman.  Focaccia-style in appearance and made using the natural yeast from fermented aubergine rather than bread yeast.  This was moist and extremely light, served alongside it was baba ganoush; roasted chickpea hummus, made more delicious with the simple addition of a dollop of honey; and a garlic clove each, which had been marinated in honey rendering it soft and both sweet and savoury at the same time! We scoffed the bread and then realised that we should probably have left some for dipping into our next course... 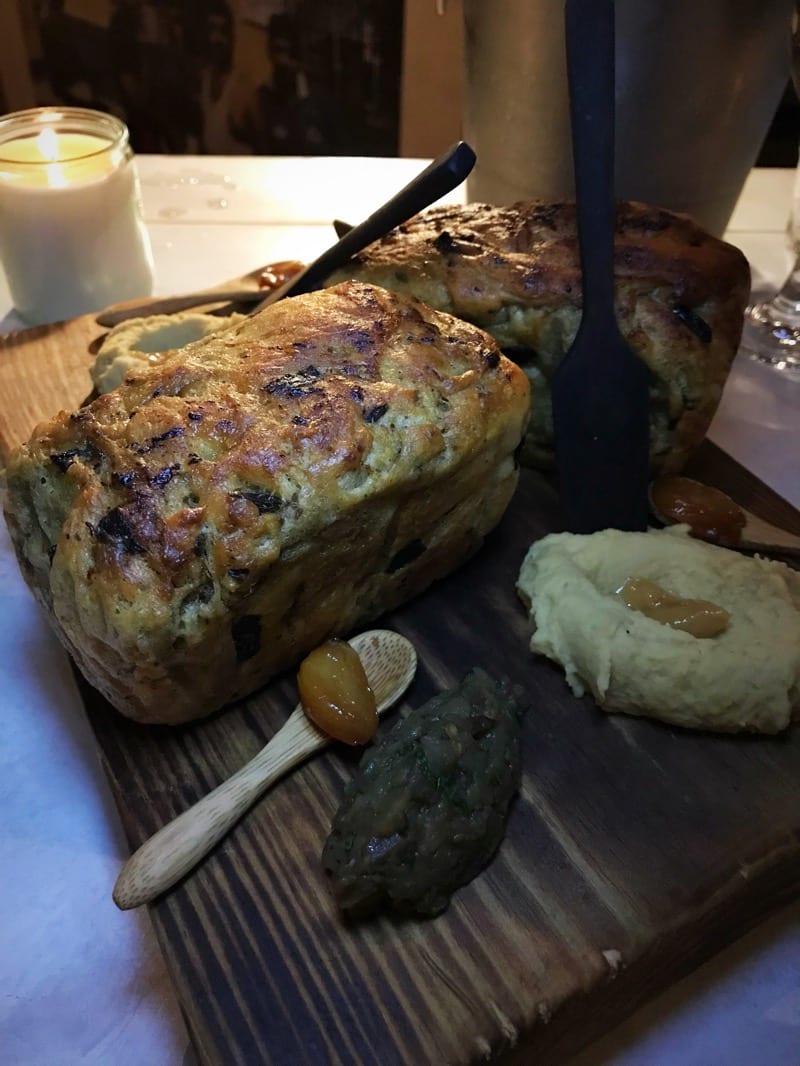 Next stop, China.  This Chinese congee inspired dish consisted of lightly charred scallops soaked in a chicken and scallop barley broth topped with spring onion and pickled ginger. This was like a mix of Scotland meets China - a hearty traditional barley chicken broth with a hint of seafood and tangy pickled ginger/vinegar taste. Ideal for such a cold wintery night. 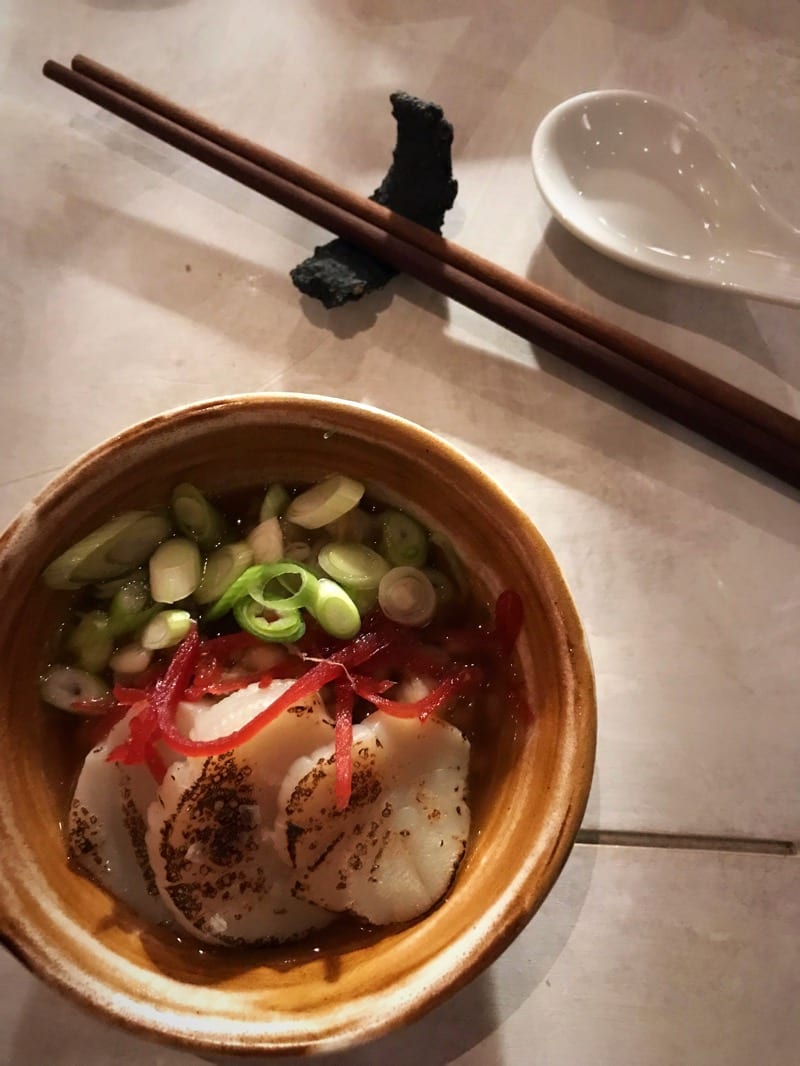 Travelling off to South Africa now with a semi-dry biltong tartare.  Brined in vinegar with juniper, coriander and black pepper. Then hung for 4 hours.  Served with smoked beetroot juice, dried beetroot and hazelnut butter. The meat was deliciously tender, you could taste all the condiments and it was strangely complemented by the nutty hazelnut paste! 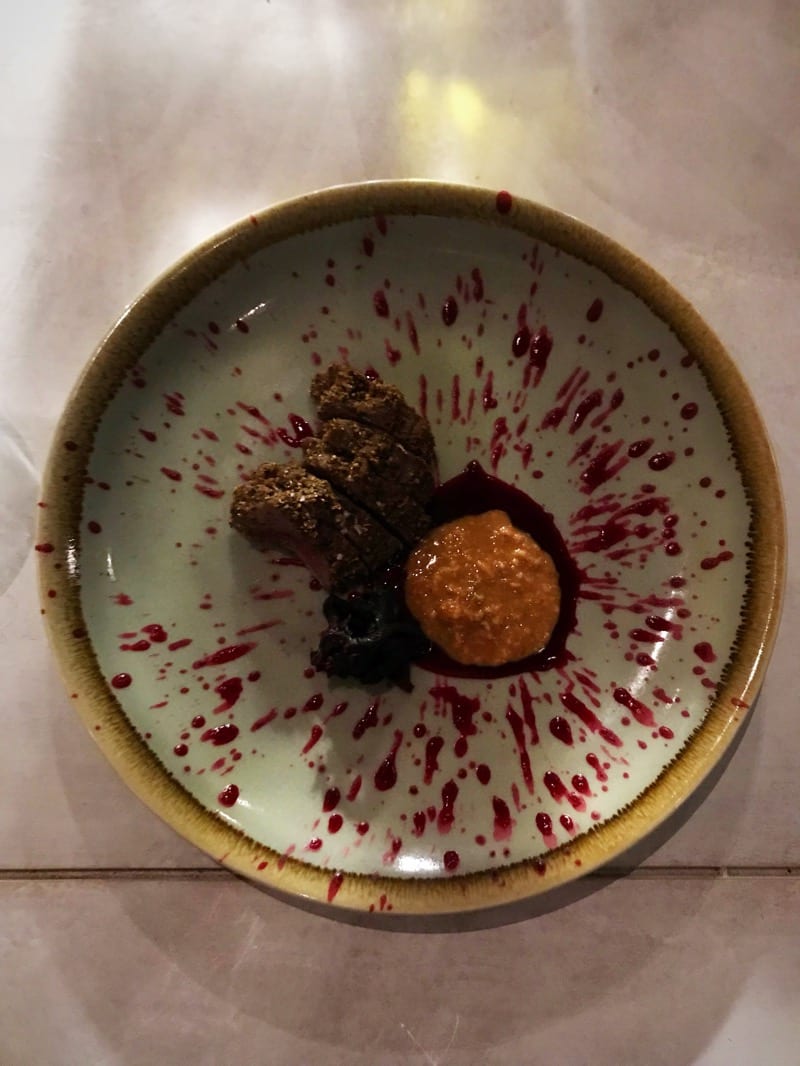 India was our next destination with a creamy and rich baked paneer, this was unlike any paneer we'd eaten before, which was more like a warm yogurt! Served alongside it was a ramekin of thinly-sliced spiced potato poppadoms and a plate of tomato masala. It was different (for paneer) but flavour-wise it was lacking something compared to the others so we felt that this was the poorest dish on the night. 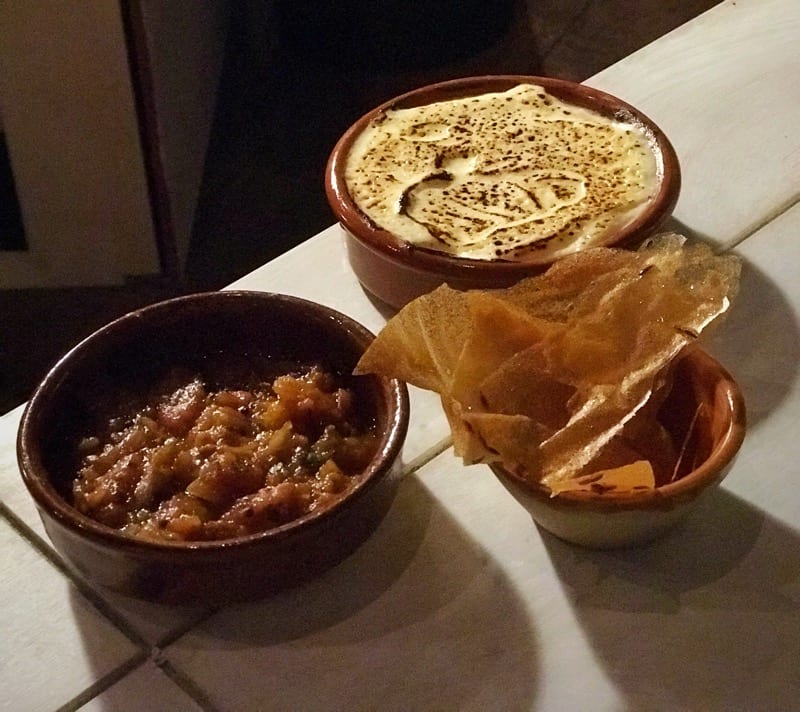 But we were all in agreement that the best dish of the night next, came courtesy of Vietnam with this slow-cooked pork belly which had been marinated in lemongrass and oyster sauce.  Pork belly is something we've had wrong so many times, i.e. horrible slabs of chewy fat, but this was perfection! The crispy Malliard pork was served with soybean butter and lettuce leaves coated in sweet chilli and fish sauce. Fashioning a wrap from the lettuce was a bit of fun and a surprisingly tasty idea, it was so so good! 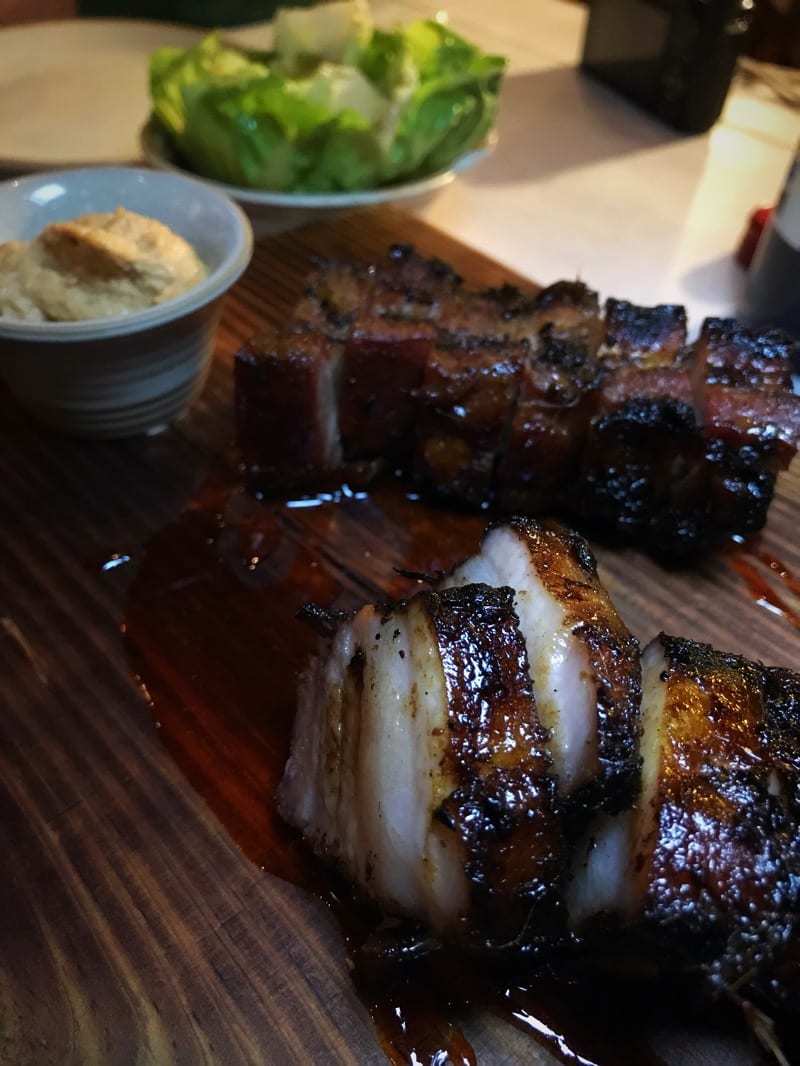 Dessert time now and we were off to Thailand for coconut tapioca served with pineapple glazed in tamarind with lime leaf cream and lots of cardamom.  Fairly simple but deliciously creamy and sweet.  I think we’ll be trying to make this one at home. 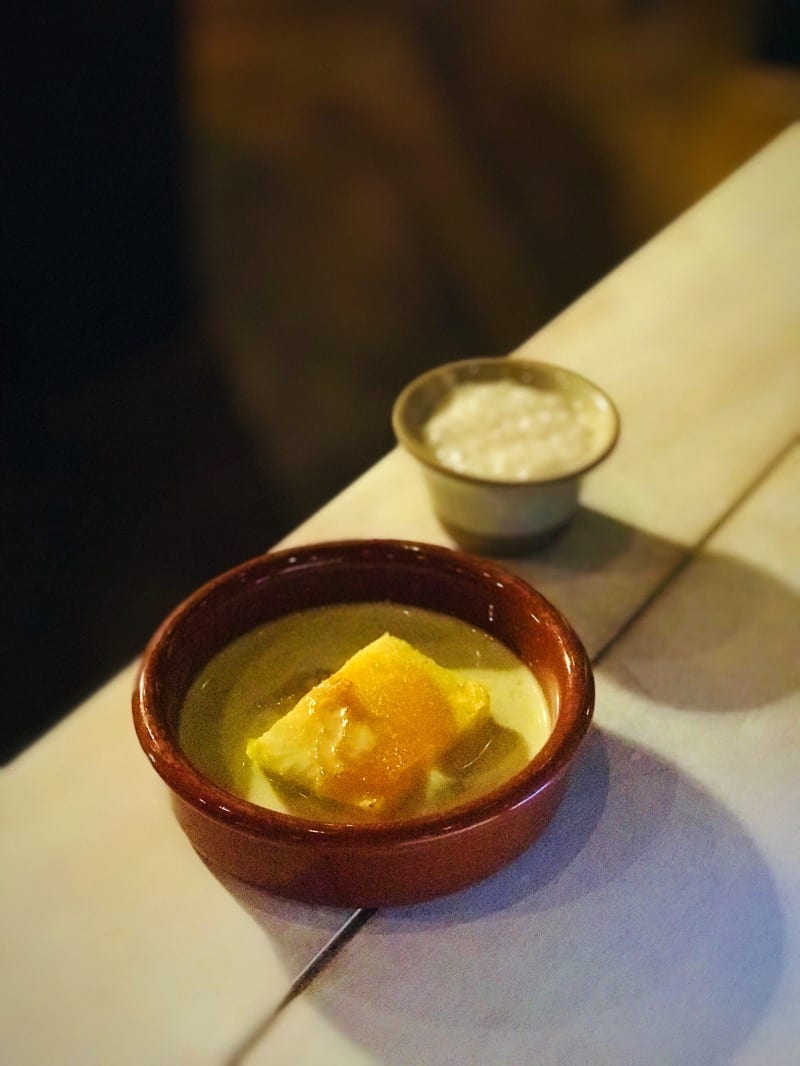 Lastly, a dish inspired by Mount Everest base camp in Nepal (there was a picture of the al fresco dining from this pop-up on the wall just behind the kitchen!). Frozen Pumpkin, homemade granola and slivers of pumpkin.  Pumpkin isn't our favourite thing in the world as it can be a bit bland but here was a mixture of flavours and textures, smooth creamy pumpkin, crunchy granola and the pumpkin slivers on top. For a dessert this wasn't all that sweet but it was light and refreshing. 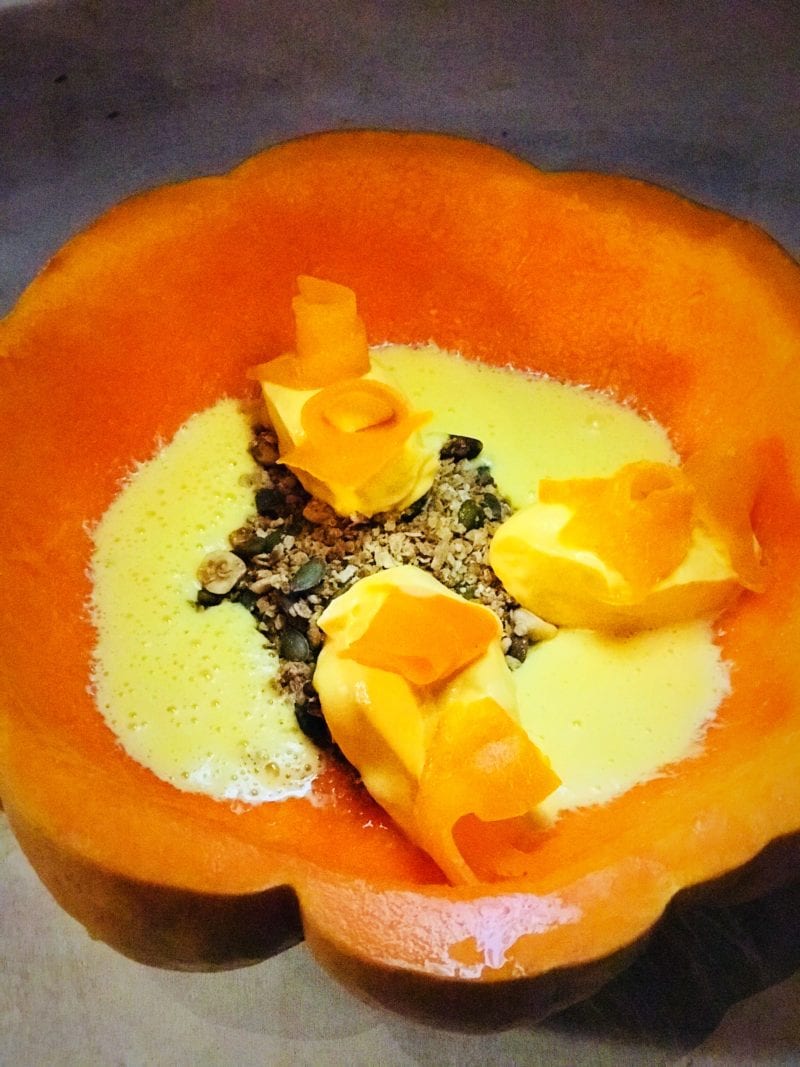 If you're a fan of world cuisine and fancy trying something a bit different then this really is a food odyssey you should get along to! The cost is £75 per person which may seem a bit steep but it is a unique event with seven courses of wonderful food, so if you miss this one you may need to travel thousands of miles to the next one! It's also BYOB so you factor drinks out of your overall cost. Tap water is provided for free.

There are only 2 nights with space in Glasgow left, this Monday 18th and Tuesday 19th December. Note that there is only 1 sitting per night at 7:30pm and as there are 7 courses we didn't finish until around 10:30 so allow a full 3 hours for the experience. 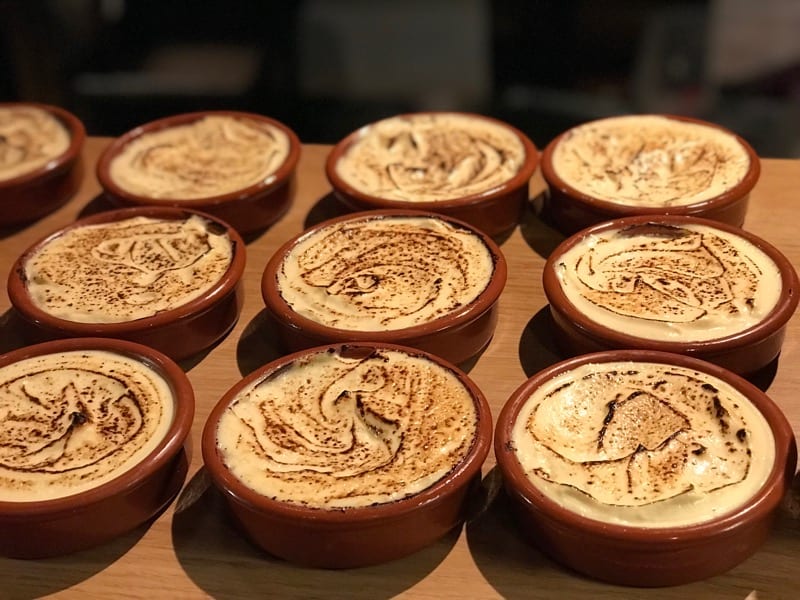 Disclaimer: we received a complimentary meal but Fred sez we know a great Vietnamese pork belly when we see one! He had his eyes on that biltong too, but we finished it all so sadly there were no doggy, I mean catty(!) bags for taking home...