A pizza sunshine in glasgow 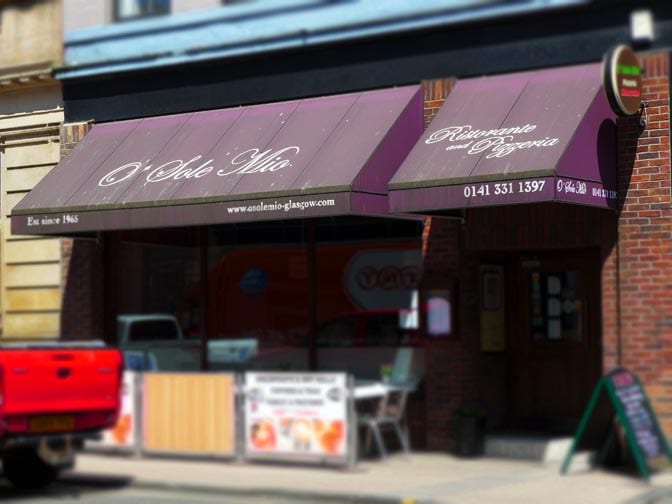 The place that reminds one of Cornetto adverts? O Sole Mio, meaning ‘my sun’ in Italian, has been here a while, claiming to be one of the original places for an authentic wood-fired pizza in Glasgow, I've been meaning to come here for years, and so one night ‘Nigel Nae Mates’ popped in unannounced and grabbed himself a table by the window thanks to the woman hiding behind the curtain as you come through the door.

A glass of house red was requested. "We have four". "The Italian one?" "We have two." I opted for a small glass of the Sangiovesse. "Medium or large?" Ok, so um...medium then (£4.95)? And then I ordered a Pulcinella pizza (£8.75) for the sole reason that it had blue cheese and not because I have a fondness for the Italian Al Jolson.

It didn't take long for the food to arrive, along with Parmesan and black pepper courtesy of the worst pepper grinder in Glasgow, I didn't tell her to stop, it just sort of stumbled to a halt after a dozen twists that dispersed the equivalent of Venice's annual snowfall. 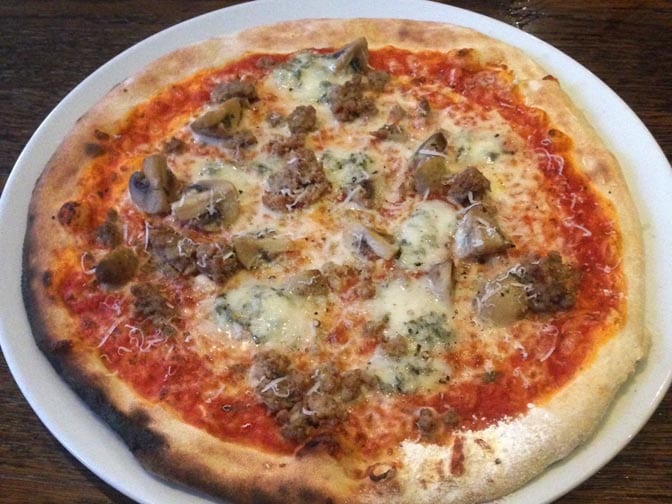 The base was thin-ish and dry, like a Brooklyn pizza but coated with more flour. It was topped with mushroom and Italian sausage alongside the Gorgonzola, which had a potent taste but it would've been nice to have it spread about, rather than just a big dod here and there.

Onto the surroundings and the music was not what I expected. There were no Venetian barcaroles here (I don't think O Sole Mio is Venetian anyway), instead it was Italian rock covers of things like R.E.M's "It's the end of the world as we know it" which doesn't sound especially sexy cantato Italiano and thanks to the power of Shazam I was able to identify that the music was Luciano Ligube followed by lots more MOR music courtesy of "Lunapop".

Service was very brisk, which was good as I was in a hurry. The restaurant is kinda cosy with a fake tiled roof along one wall for some reason and I got a glimpse of the oven, with its smokey aroma, on the way to the (clean) toilets.

A decent pizza though Paesano still wins for me, but I'm tempted to return for another. This time to sit at the back breathing in those smokey fumes. Yes, really.

TL;DR
+ pizza oven and aroma to match (at the back of the restaurant)
+ clean toilets
+ prompt service
+ close your eyes and the Italian music will make you think you're in Italy

- then again, the Italian music may drive you mad

EDIT: O Sole Mio has now sadly closed as the building is being demolished.