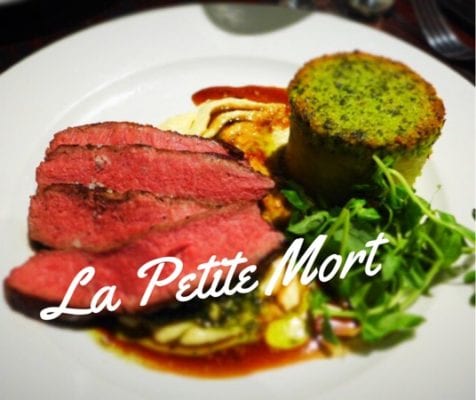 The last time we came here it was the lounge of Bennets bar. Still operated by the same people who run the pub, the lounge is now a compact atmospheric restaurant. Think along the lines of a haunted house (but without the shivers down your spine) – there’s random pieces of silverware, candles, an ornate mirror, a painting of a stormy tide and dark walls… 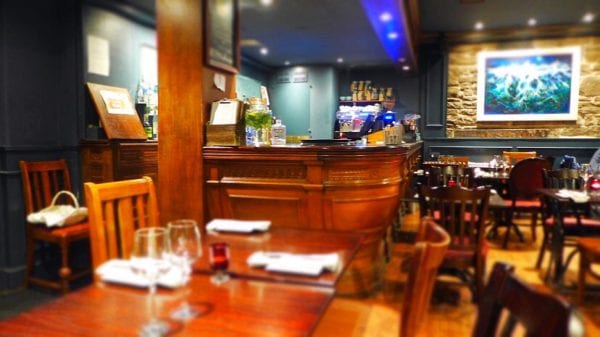 We were seated quickly and offered our pre-ordered porthole cocktail. You see, La Petite Mort serve visually-appealing cocktails in “Porthole infusers” (read all about them here) but you must order them at least 24 hours in advance to let the flavours mingle fully!

We chose the lemon and thyme daiquiri, mainly for the presence of thyme liqueur, something we’d eyed up before in the Good Spirits Co. but never had the courage to buy. It was a citric and refreshing elixir with a bit of medicinal herb flavour. It probably wouldn’t appeal to all tastes but if you like Strega, Amaro, Vermouth or bitter liqueurs then this is a worthy cocktail for £16.95. Shared between two you get 2 – 3 small glasses each.

If that one sounds a bit too adventurous they also do the following Porthole cocktails:

If you can’t pick in advance then there are regular cocktails and other drinks of course.

After a short wait, the bread arrived: spinach and parmesan, which was deeply satisfying and on a par with the amazing bread they serve at Cail Bruich in Glasgow. A heady cheesey aroma with an earthiness from the spinach and an impressive crust. Salty but oh so mmm, it was so soft and fresh that it didn’t need the butter so we asked for a few more slices. This could’ve been a course in its own right! 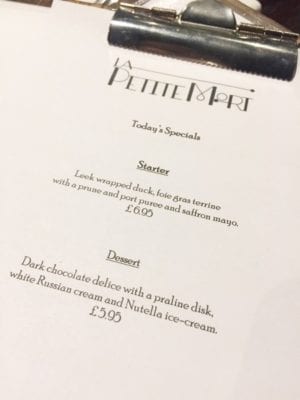 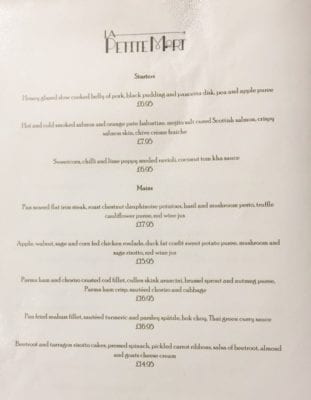 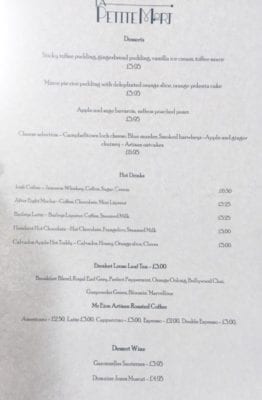 We squabbled over who should have the leek-wrapped duck terrine special (£6.95). The Mrs won. Crunchy leek wrapped around a thick meaty terrine with a smooth foie gras centre, served with sweet chutney. This was really scrumptious!

We both had our eyes on the ravioli (£6.95) too. The concept of Thai-meets-Italian tickled my tastebuds, but this was no bite-sized flaccid pasta. A single giant, firm raviolo sat in the Tom Kha broth. It was quite potent, as Tom Kha can be with tingles provided by the chilli and lime in the filling.

The Mrs had cod (£16.95) for her main. Crusted on top and placed on sautéed chorizo and cabbage – the chorizo was pretty strong. The arancini, like the ravioli before was another fusion of Italian and elsewhere, this time Moray’s finest chowder: Cullen skink. Not soupy inside but creamy and fluffy with a crisp exterior. The cod was good too but you know that way where it can be a bit bland so you understand why the chorizo and other ingredients are there (Parma ham, Brussels sprout and nutmeg purée too) but it actually overpowered the dish.

I chose the flat iron steak (£17.95) but was surprised that no one asked me how I wanted it done but any decent chef will cook it medium-rare and so it was that it came out pinky-red and tender. Four slices of the succulent meat served alongside a perfect dauphinois stack with a herby crust. There was a lot of basil/pesto here so like previous dishes you could taste an Italian influence.

The climax of our meal was of course dessert.

I had to have the special: a dark chocolate deluxe with a praline disk, white Russian cream and Nutella ice-cream (£5.95). The disk was like the top of a creme brûlée but rather than cracking it to reveal, what could be a boring dessert, underneath instead was delectable chocolate. With more chocolate on the side complemented by the gianduja hazelnut nuttiness. It wasn’t orgasmic but you can’t go wrong with triple chocolate for £6.

The Mrs opted for the apple and sage bavarois with poached pear (£5.95), having no real idea of what bavarois, or “Bavarian cream” is!

It was more of a savoury dessert with the apple and sage both making the dessert quite sour. It was all a bit too much for Mrs Foodie, who couldn’t ever remember eating anything like this in Bavaria (according to Wikipedia it was Fannie Farmer who brought worldwide fame to this dessert)! The poached pear was soft and the fresh raspberries tart so maybe some more pear was required to offset the sourness?

We finished our meal satiated, with the extra slices of bread pushing our bellies to the edge, and walked out into the night with a warm glow! Aside from a few minor issues the standard of food was really high, especially for the price, and service was really pleasant and prompt. We would happily eat here again.

The Porthole cocktails are an interesting concept but I can’t see too many people ordering their drinks a day in advance. But I could be wrong! Prices for the other drinks seemed reasonable.

The toilets are not the most dazzling as they are shared with Bennets, the pub on Leven Road. However, graffiti on the men’s cubicle door aside, they were clean and functional – and you have the advantage of a pre or post dinner drink in a decent boozer!

Music was: Belle and Sebastian, some atmospheric ambient stuff and tunes which wouldn’t sound out-of-place at Optimo.

– But do you really want to order them in advance?
– Apple sour or too much sage in pudding?

We received a complimentary meal for the purposes of review but Fred vouches that this post is the whole truth and nothing but the truth.