Alston Bar & Beef recently revamped their set menu so have invited various Glasgow bloggers in for their opinion. We went along for dinner with both Emma Eats and What Claire Baked for food and a natter.

It's easy to walk right past Alston Bar & Beef, with its low-key entrance. Named after Alston Street which existed here before Glasgow Central Railway Station was built on top, it's just inside the main doors next to Gordon Street Coffee and through a single door with a sign which asks "what lies beneath?".

Once you've found it, descend underground into the depths of Glasgow Central where you'll enter at the serving area so you may get a sneak peek at the food! 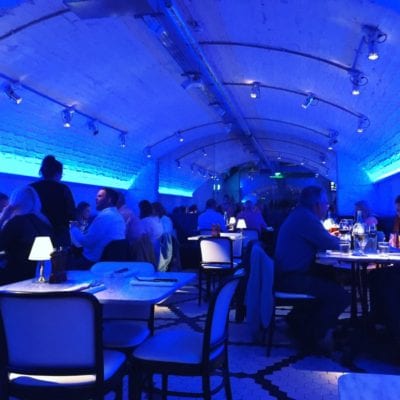 Turn left to the bar and behind here is the restaurant (pictured above) in the vaulted cellar. Whitewashed walls and blue lighting combine with decanter light shades and spot lighting to give Alston Bar & Beef a nightclub feel but sadly it doesn't stay open after Glasgow Central station closes! 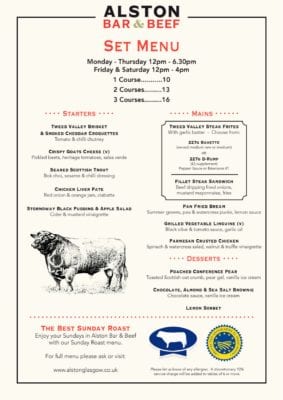 In addition to being known for steak Alston also specialise in gin and gin-based cocktails so we had to indulge in one cocktail a piece... 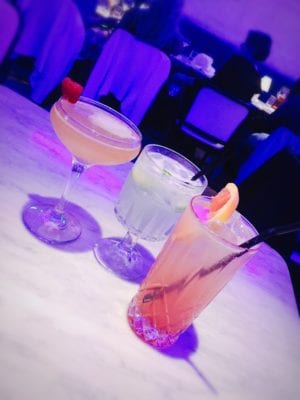 Our order was promptly taken and the starters arrived in no time at all.  Mr Foodie picked the Tweed valley brisket and smoked cheddar croquettes whilst I picked the black pudding and apple salad. 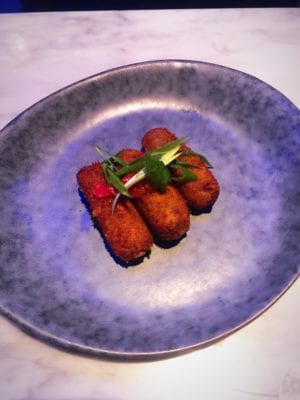 The trio of croquettes were, as should be expected, slightly crunchy on the outside with a soft gooey harmonised interior of meat and cheese so all good here. 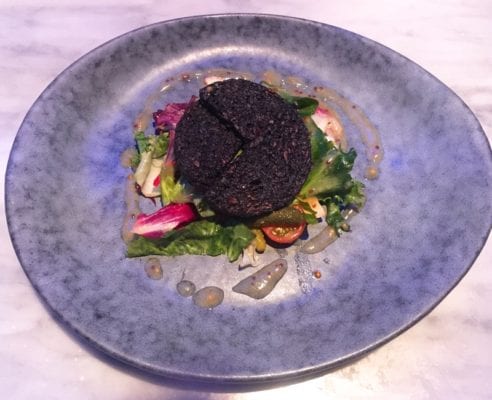 A crisp slice of black pudding for Mrs Foodie came atop apple salad but there was more salad than apple here which was disappointing so Mr Foodie won this round. 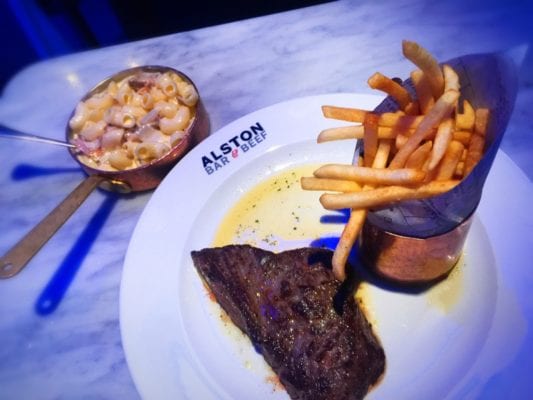 I ordered bavette steak medium-rare with chips and a garlic butter sauce with a side of macaroni cheese from the a la carte menu.  The steak was cooked medium-rare as requested, however it was quite chewy so perhaps cooking it longer would have been a better choice.  Whilst there was a smokey cheese sauce with chunks of brisket in the mac and cheese, it wasn't quite up there with the best but it was a noble effort. 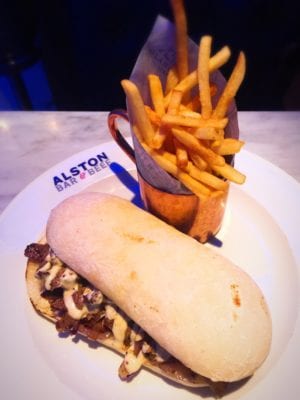 The fillet steak sandwich was actually a better choice over the bavette, it was cut thin and despite being cooked for longer it offered lots more flavour, especially with the inclusion of beef dripping onions and mustard mayo, making for a filling main. Mr Foodie wins again gosh darn it! 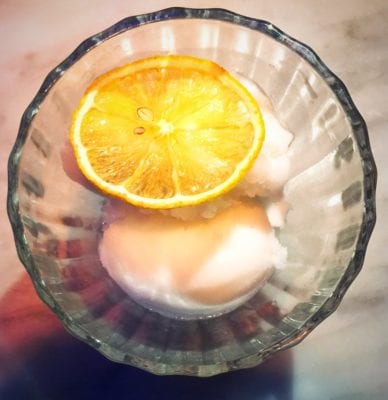 I picked the lemon sorbet as Mr Foodie got in quicker than me to order the poached pear. It was suitably tart and zingy, and after the steak and mac and cheese, the cleansing lemon sorbet was needed! 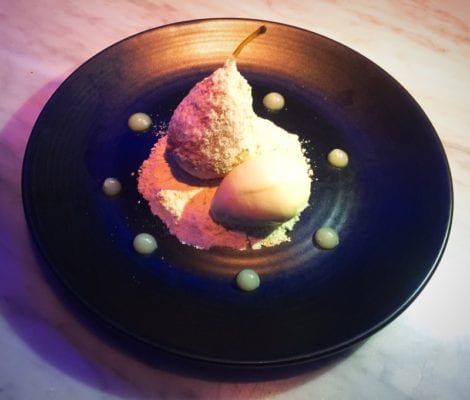 The conference poached pear was cooked perfectly. It was entirely coated in, and resting atop a mound of, toasted Scottish oats alongside a scoop of vanilla ice-cream with pear gel blobs dotted around the plate. All sounds great but there were just too many oats which undid the ripe fruitiness of the pear giving the dish a drier than expected consistency...maybe you're only supposed to eat some of the oats but Mr Foodie always likes to clear his plate!

As such, the lemon sorbet was the winner here.

Alston bar and beef are offering up a competent well-priced set menu for lunch or an early dinner. The starters (we loved the plates) and desserts were well-presented but perhaps something was missing from the mains to make them stand out more? Regardless we enjoyed all the food though there were a few minor things which could have been improved upon but we expect we'll be back again soon, given we travel into Glasgow Central most days, and may give the a la carte a go next time. Importantly we were also stuffed after three courses so there was a filling amount of food here. Don't forget that Alston also have a great gin selection and serve up some wonderful cocktails for washing down your dinner too. if you have a train to catch departure times are displayed on a screen in the restaurant (just like Gordon St Coffee above) so you don't need to panic about missing your train and thus it's handy for anyone who commutes to Central and also makes it a great spot to have lunch before a train trip away. Last but not least, toilets were checked and were in good working order!

It's right under Glasgow Central station so couldn't be easier to access from any trains terminating here. It's also less than a 5 minute walk from St. Enoch underground and less than 10 minutes from Buchanan St railway station.
Disclaimer: We were lucky enough to receive a complimentary meal but Fred says this is a truthful write-up. He was totally jealous when he saw the pictures!