Did you see the slow cooker 'Full English' fry-up breakfast hack on Internet news stories recently? We did and being interested in all things food decided to give it a try but with a slow cooked 'Full Scottish'.

A trip out to the local butchers was required for links sausage, square sausage, Stornoway black pudding, bacon, tattle scones and dumpling (as they had sold out of fruit pudding). No haggis either folks. Following a quick wash of the “it lives in the cupboard” slow cooker we were ready to go... 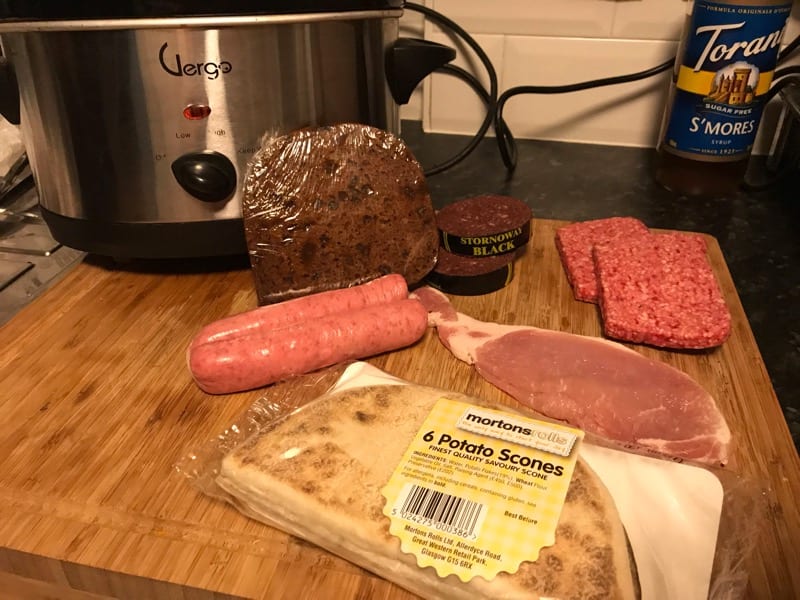 Sausages were placed at the side of the bowl, then we wrapped up the bacon and placed against the side. This, and the base, is where the heat is so we should get some crisp fat. 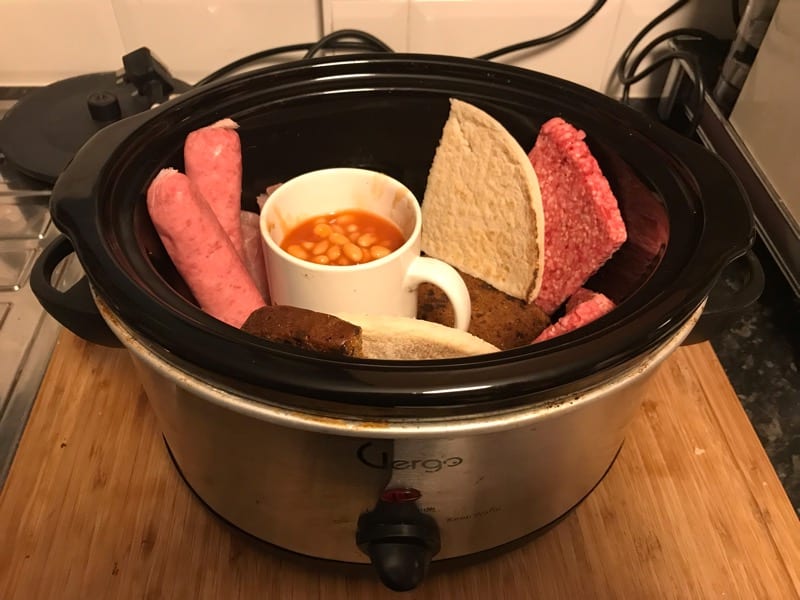 Do the same with the black pudding. We have a small slow cooker, so the dumpling was halved with one piece along the side and the other half laid at the bottom to see how each cooked. Potato scones were placed one at the side and one balanced in the middle. A mug full of beans and then the lid was placed on top the goodies, and at the last-minute Mr Foodie added an egg (uncracked). 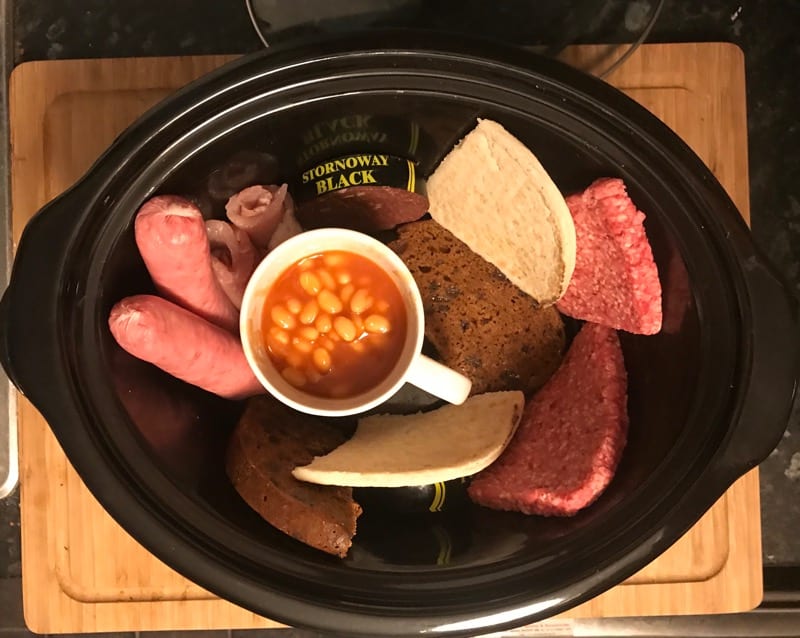 We weren’t sure what time we were going to peel ourselves out of bed so the slow cooker went on low, and off we went to bed.

Next morning, around 9 hours later, the aroma of breakfast made it to the bedroom, well Mr Foodie told me anyway as my cold had rendered my nose useless! 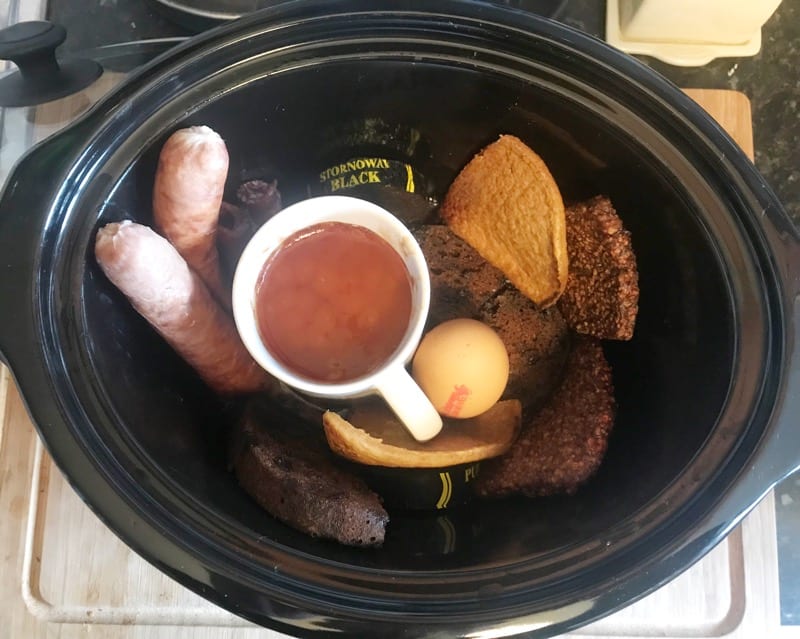 The morning after the night before...

On opening the lid we could see that there was a fair amount of burnt crispy bits and the Lorne sausage was clearly overcooked, while the bottom of the slow cooker had a layer of slime AKA fat. Eew!

So how did it taste? Well, I think placement is key to cooking this. It’s not simply a case of chuck it in and leave it. 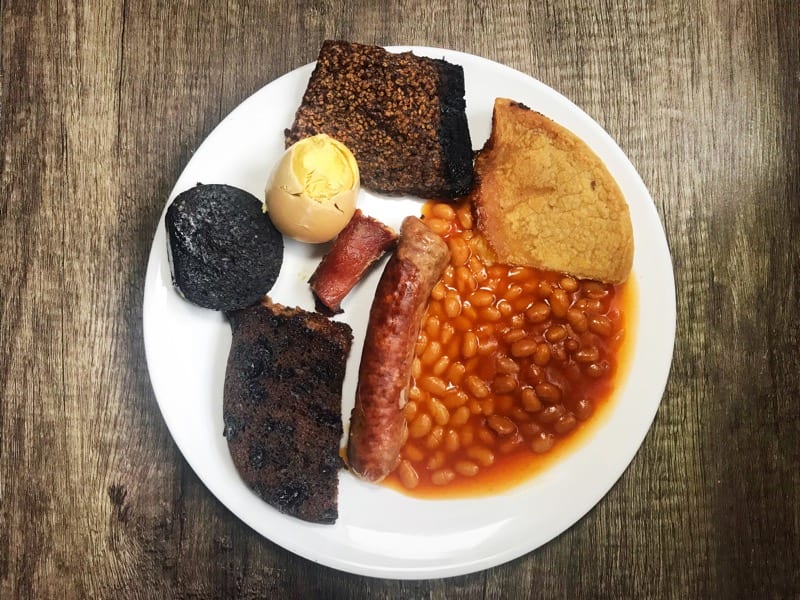 The link sausages were good, just the casing colour let it down when you look at it closely. The Lorne sausage was like a slice of cardboard - burnt and solid. The black pudding had half-dried out and tasted saltier than normal, but kept its shape thanks to the casing. The bacon was really dry and shrivelled up. Basically anything touching the side or base got a hefty heating. Making some things dry and over-cooked.

The potato scone and dumpling which were balanced off the sides turned out OK, moist and edible, but the two which touched the bottom were cooked solid. The beans were surprisingly good. I was too scared to try the egg. Mr Foodie braved the task. It had turned a weird brown colour, looking like it was on its way to become a thousand-year-old egg, not the most appetising looking but it actually tasted normal.

Breakfast of champs? Not quite but if you know you are going to have a stinker of a hangover, are unwell or can’t face standing at a cooker for any length of time then this is OK. We’ve eaten worse in cafes! No oil was used so it's probably slightly healthier than cooking in a frying pan?!

If you want to give this a go, the main thing is placement. Fatty link sausages do good against the bowl. Other bits not so much. If I was going to do this again I think I’d do this:

Side of the bowl:

Balanced somehow so that they are not completely at the mercy of the heated bowl.

Place inside a mug:

A bit of planning when putting it together could make this work. Maybe not the best fried breakfast you’ll ever have, but it might be just what you need. Let us know in the comments below if you've been brave enough to try a slow cooked breakfast yourself and if you have any tips and pointers.

« Is this the cheapest porridge in Scotland?
News: Belvedere Pop-Up at The Citizen - a taste of the cocktails »