Jesmond Dene House Hotel is a grand city mansion in northeast Newcastle, roughly three miles from the centre, but in 10 minutes, by car, you can be in central Newcastle and yet you could still be persuaded that you're out in the country as the Grade ll-Listed Arts and Crafts building sits in a pool of green overlooking a wooded valley filled with historic ruins and other attractions.

"Dene" actually means "a ravine with a stream" and Jesmond is the hip area where you'll find Jesmond Dene House, which has been one of Newcastle's most well-known addresses for well over a century. 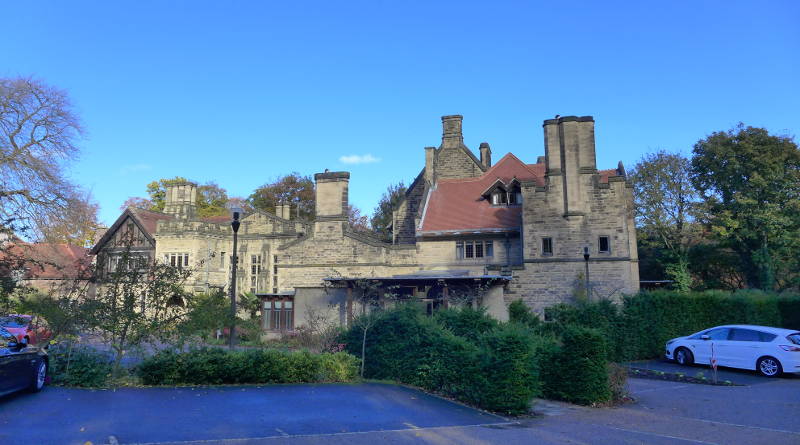 Built in 1822 it was purchased by Captain Andrew Noble in 1871. Originally from Greenock, he was a partner in Lord William Armstrong's shipping and armaments company (here's some info about Britain’s forgotten genius William George Armstrong) who would later go on to become Sir Andrew Noble, and also chairman of the company. With such wealth, he redesigned the house to entertain his growing family and any dignitaries who might pay a visit, such as foreign diplomats, royalty or stars of the day - both Rudyard Kipling and Sir Arthur Conan Doyle had stayed or dined here.

Nowadays it's a boutique hotel listed in the Michelin guide. It also has 3 AA rosettes, and that's how we came to find ourselves staying here rather than in central Newcastle (read our Jesmond Dene accommodation review here). 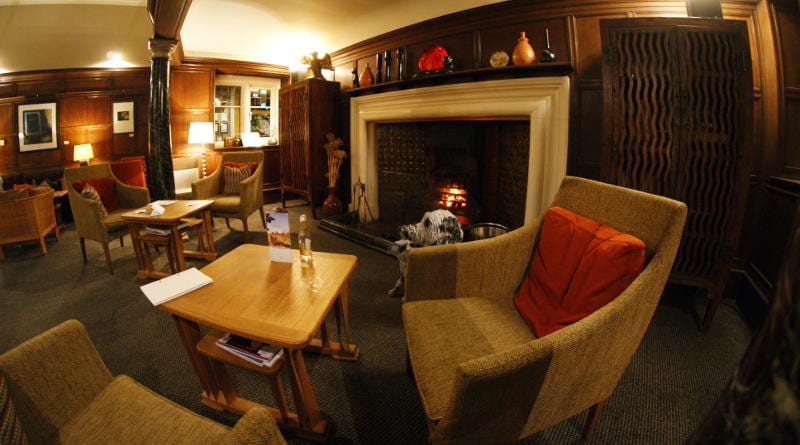 Before dinner we took prime position next to the real fireplace in the Billiards room (it was a cold night!). A waiter took our order, brought the drinks over to us and then took them through to the dining room when our table was ready. For any real ale fans they have a few bottles from the nearby Tyne Bank Brewery. 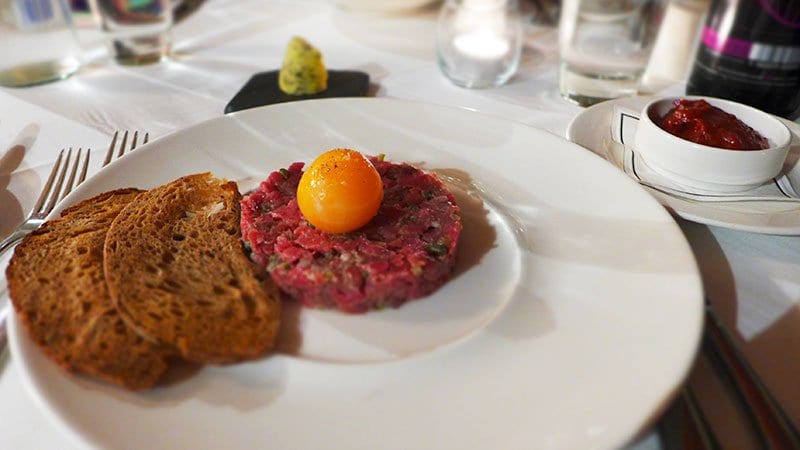 I can't resist steak tartare when it's on the menu and this was a satisfying starter. Burger-shaped with a cooked, rather than raw, egg yolk atop served with two slices of crisp toast and tomato chutney on the side. The meat was finely chopped and tasty, and there was a plentiful amount of capers but it could've had more kick for my liking. In Galvin Brasserie in Edinburgh they ask how spicy you'd like it and bring bottles of Tabasco with the dish, and in L'Escargot Bleu (also in Edinburgh) they'll mix it at your table! It would've been good if they could do something like that here for a more memorable experience. 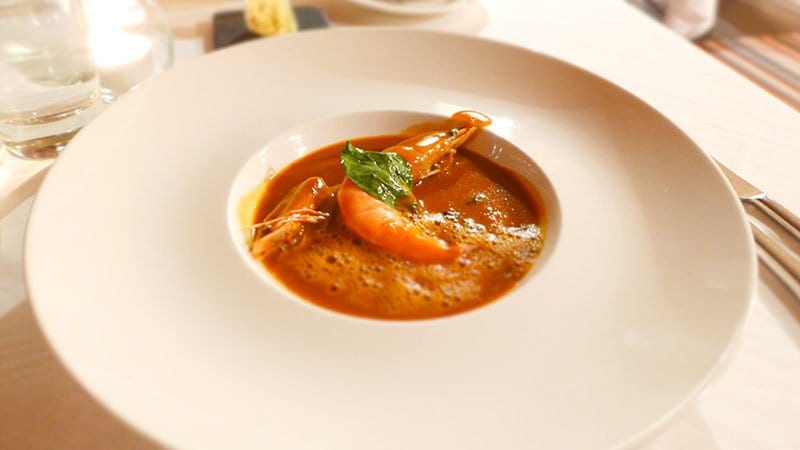 Mrs Foodie had this - two large prawns (one poking out!) sat in the fishy broth, redolent of fine fish soups we've had in seafood restaurants by the sea. Like a good bisque it was rather potent. 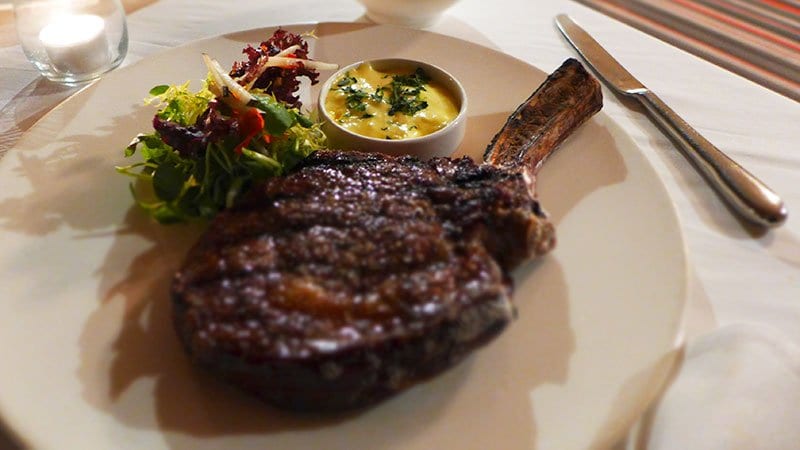 The steak was cooked medium-rare, as Mrs Foodie requested, and was a huge chunk of meat on the bone, served with a little salad and our choice of sauce.  No steak knife was provided though, so it was a little tough to cut with a regular knife. We also had some rather good chips on the side but it felt like it needed something else to really stand out. 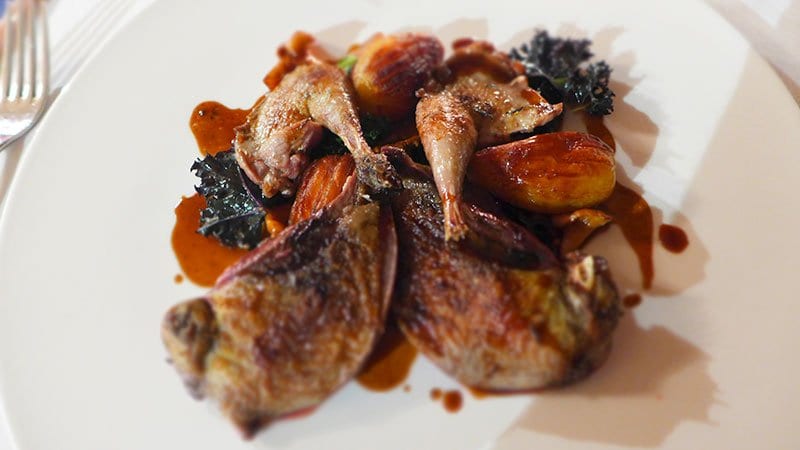 Grouse isn't something I normally order, actually I'm not a massive fan of game birds in general as they are usually overcooked and dry but in a restaurant with 3 rosettes I thought I'd give it a go and on this occasion I was not disappointed. This was quite bloody, so anyone who isn't a fan of rare meat might struggle with it.  For me, the taste of the grouse was still a bit too strong but game bird aficionados would certainly lap it up. 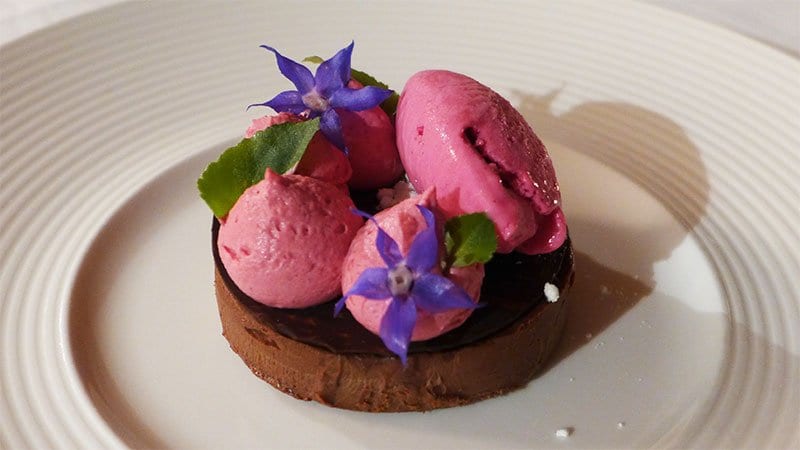 Chocolate desserts don't normally look so dainty. This was a lovely smooth hockey puck-shaped disc of truffled chocolate served with beetroot creme, beetroot ice cream and edible flowers. Savoury ice cream seems to be in vogue, and this lightly-flavoured one gave the dessert an earthy characteristic. A nice finish to the meal!

Very good food, which we enjoyed but for 3 AA rosettes we felt that something was missing to make it an unforgettable evening. That being said, Jesmond Dene House Hotel is one of the best restaurants in the Newcastle area, providing a relaxed, refined, dining experience away from the city centre - but if you're only in Newcastle for a day or two, don't let that put you off - it's only a short metro or bus ride away from the main train station.

As we were staying as guests we did not use the restaurant toilet facilities but we can attest to the cleanliness of our en suite!

If you're planning a trip to Newcastle with your significant other then Jesmond Dene House Hotel is the obvious place to stay, and if you stay here it would make sense to eat here too!

Disclaimer: During our complimentary stay we received our meal at no extra cost however we had to pay for all drinks.