Good things come to those who eat at Eighty Eight

Eighty Eight has now opened and we were lucky enough to get a table at the soft opening. Located where Two Fat Ladies was at 88 Dumbarton Road (hence the Eighty Eight bingo calling reference), it's mere minutes from Kelvingrove Park, Kelvingrove Art Gallery and Museum, and Kelvinhall Underground station. 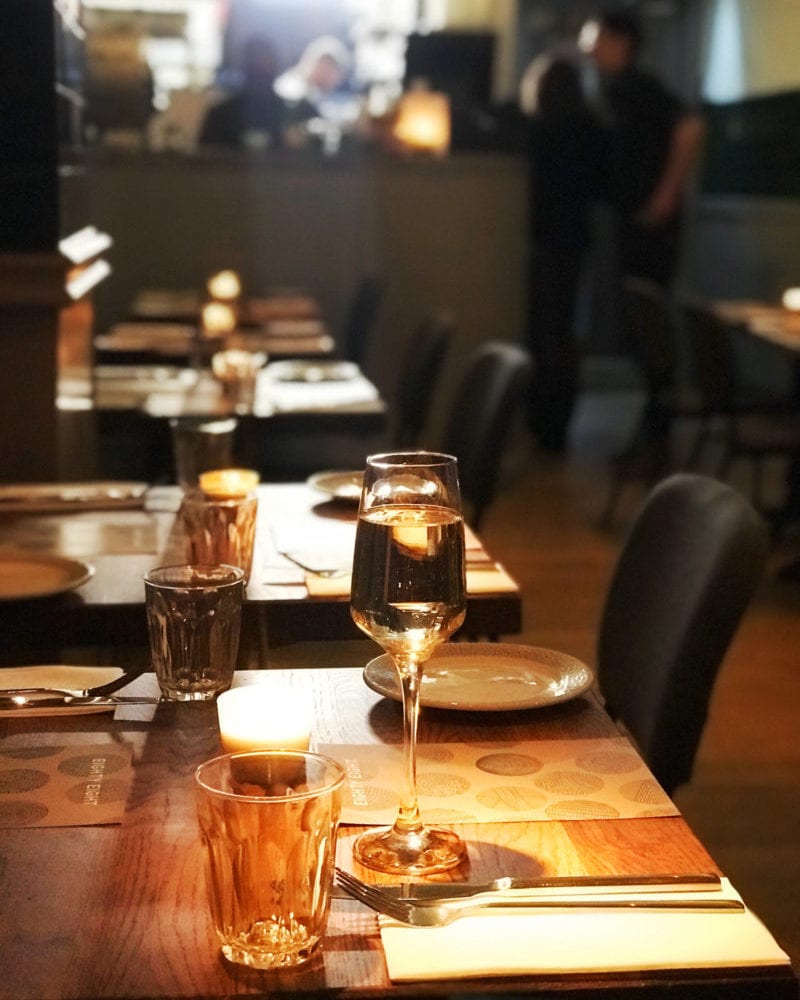 We started off with a glass of Duello, a dry sparkling wine from the same region as prosecco, which tastes like prosecco and possibly is the next prosecco! 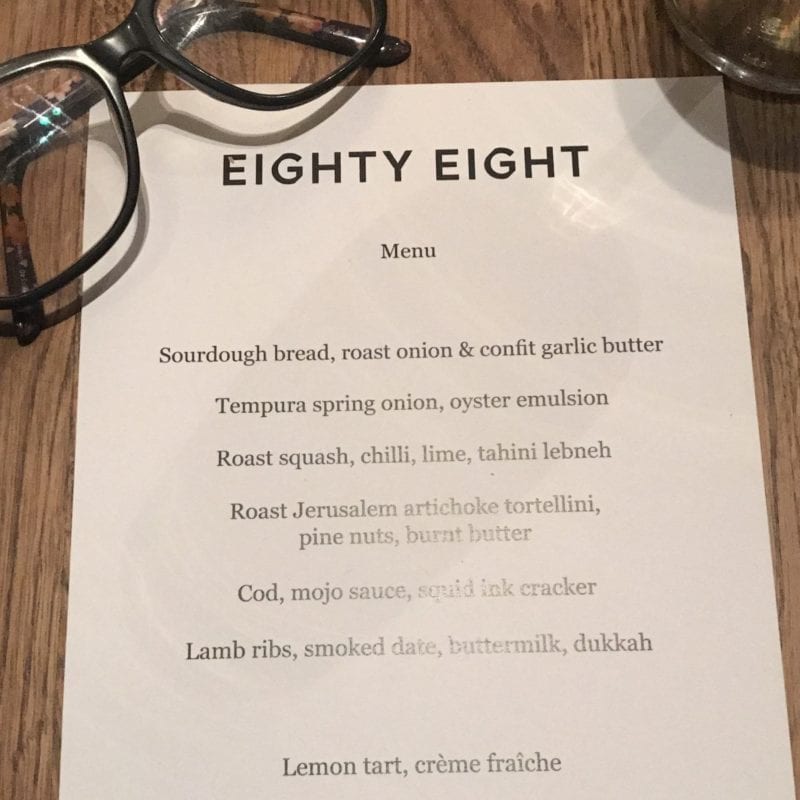 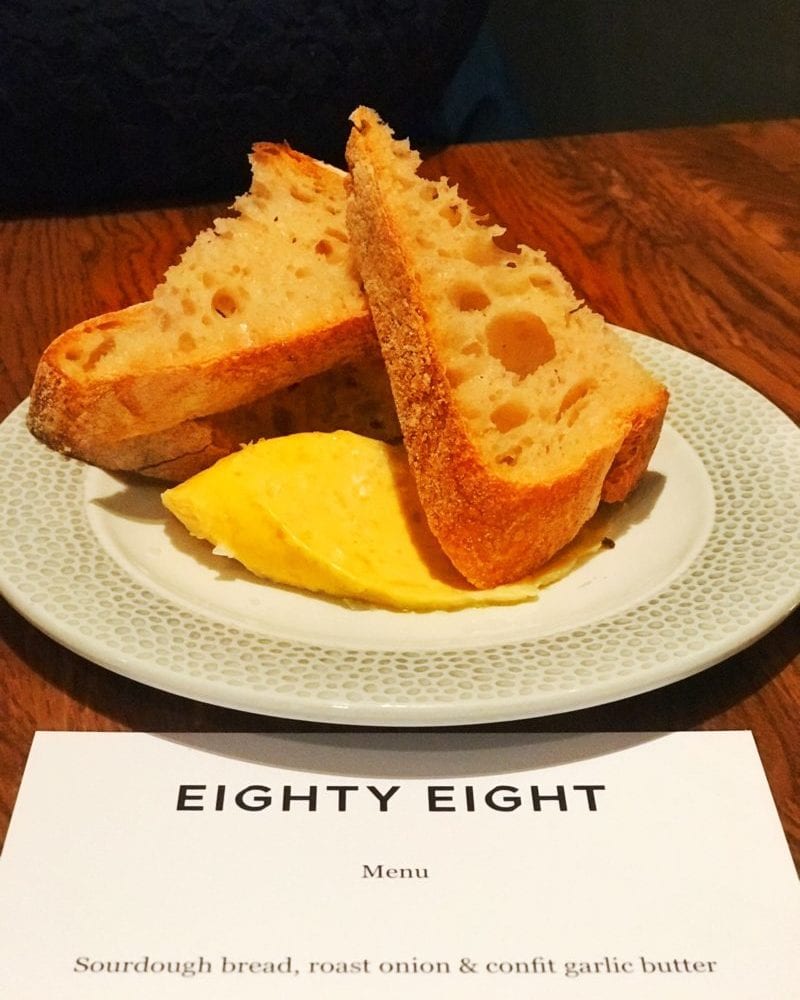 Sourdough with roast onion and confit garlic butter
Yums all round, expertly made fresh bread. If the bread had been warm 🤤  - the butter was soft, spreadable and very moreish though. 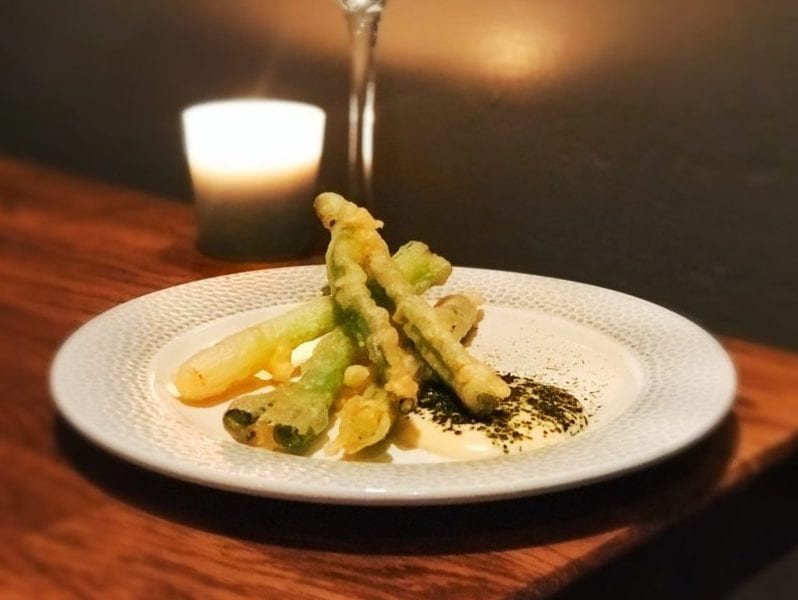 Tempura spring onion, oyster emulsion
Now there's something you don't see often on restaurant menus. The emulsion also contained nori seaweed. We're big fans of tempura, big fans of spring onion and big fans of Japanese cuisine too so this was right up our street. Like the previous course, it was simple in principle but one of those dishes you could easily demolish and go back for more. 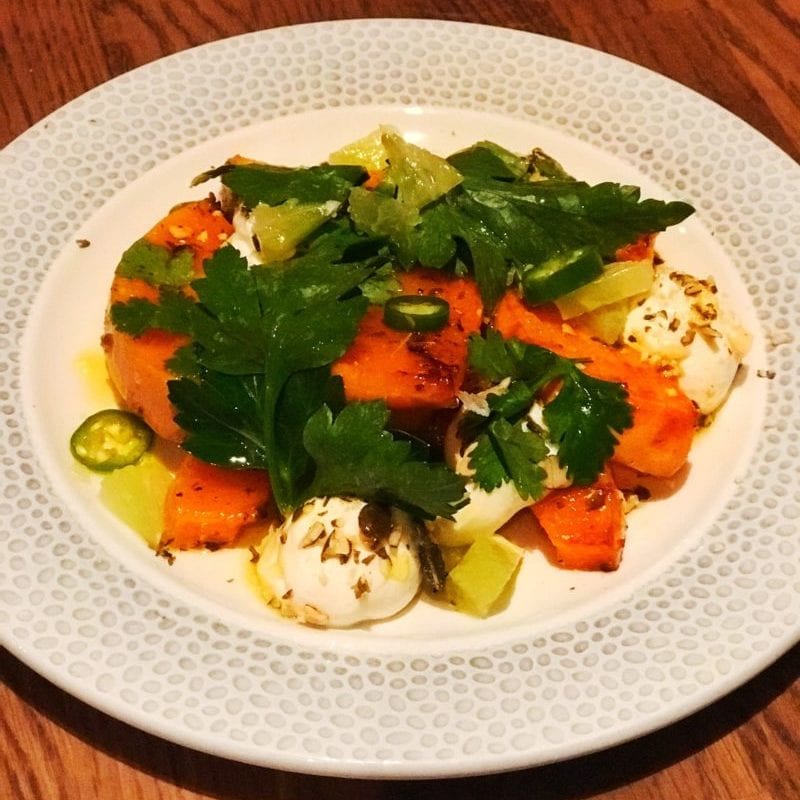 Roast squash, chilli, lime, tahini labneh
Seasonal squash beautifully cooked with heaps of both parsley and coriander - to be clear, We’re all for it, the more herbs the better in our view! Also on the plate were think slices of potent chilli. For non-chilli fans the creamy labneh helped extinguish the fire!

By this point we had finished our first drink so moved onto cocktails... 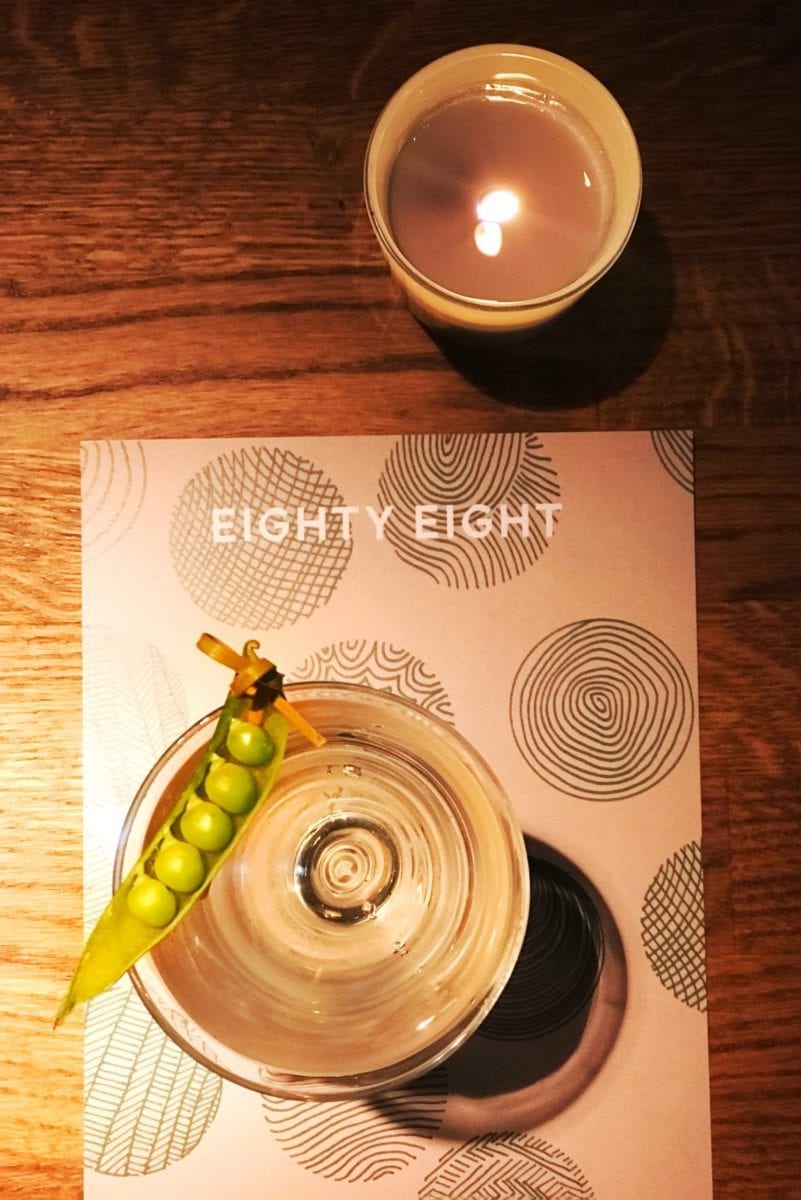 Sweet pea
Gin, sugar snap pea, vermouth Blanca, sesame oil. We‘re big fans of red vermouth; white vermouth not so much so a martini has never been as appealing as a negroni to us but here the twist is the addition of Sugar snap peas, both in the drink and on it, making it look cute, possibly even healthy and imparting a green earthy taste; more so than any green olive could achieve. 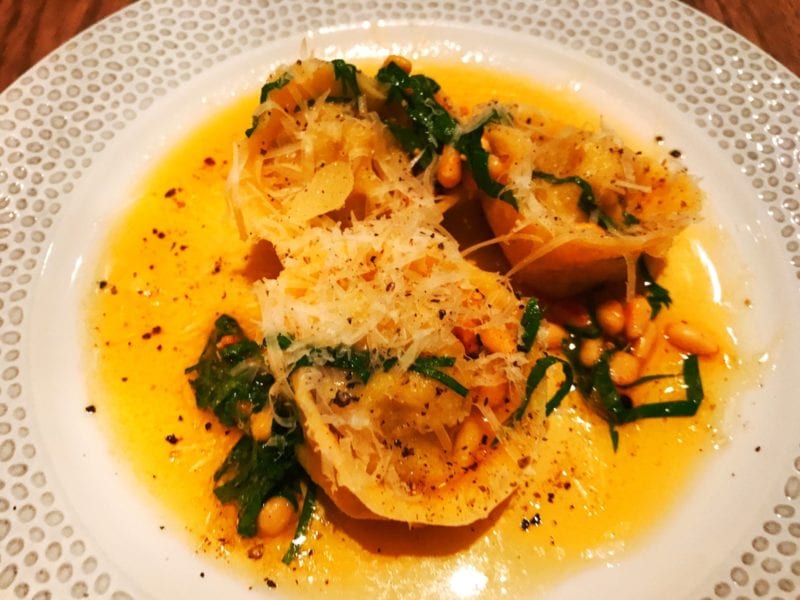 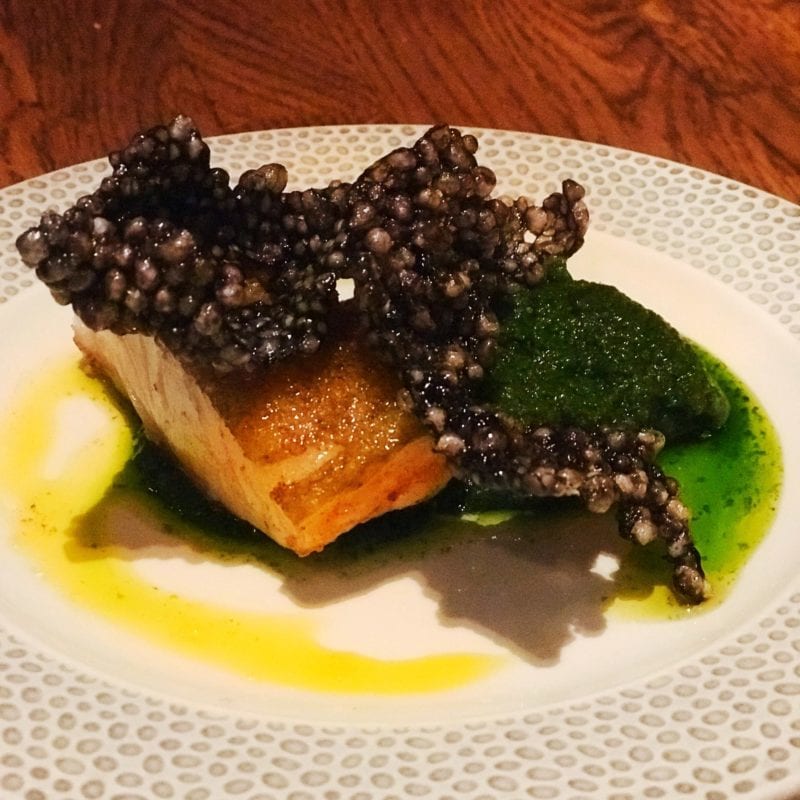 Cod, mojo sauce, squid ink
A salted crunchy squid ink cracker with a delicate slice of nicely-cooked fish and a taste of the Canary Islands on the side: green mojo, so more parsley and coriander flavour, which is just fine by us! 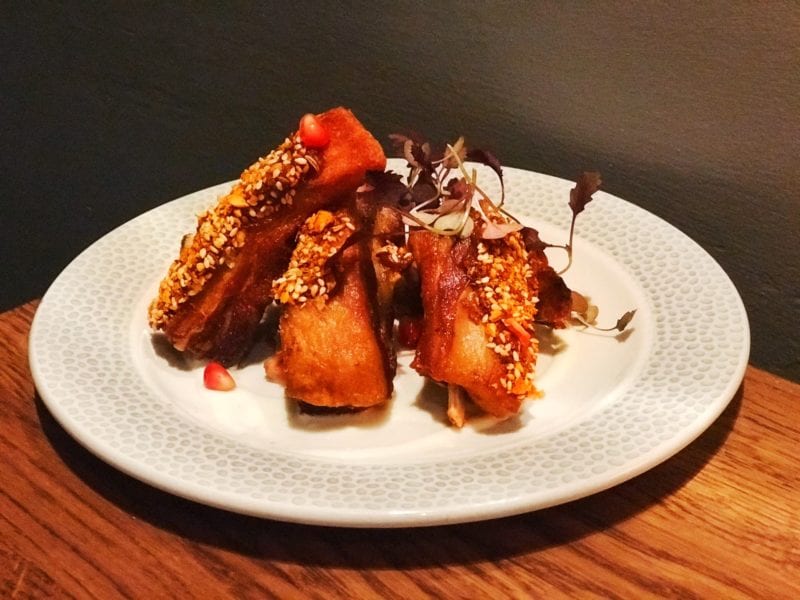 Lamb ribs, date, buttermilk, dukkah
The next course took us to the Middle East. Beautiful, tender ribs coated in a sweet date paste with a dukkah tasting of cumin and sesame seeds. A sprinkling of pomegranate seeds also provided fruity bursts of tart flavour. 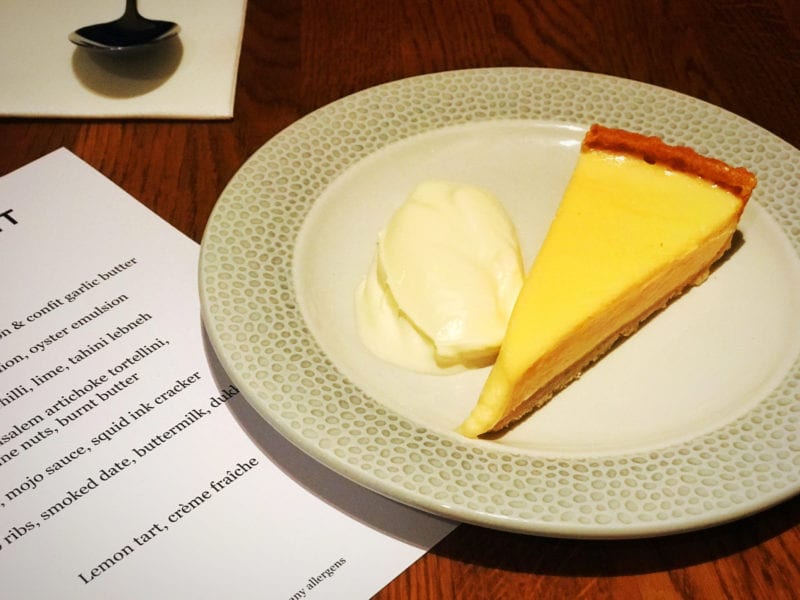 Lemon tart, crème fraiche
A simple light citrusy tart with sturdy base and a creamy-tasting crème fraiche. Perfectly fine but a wee bit boring in comparison to the previous courses. However, an excellent palate cleanser after all those flavours.

Once again our theory holds that if a meal begins with great bread the rest that follows will be something special and this was exemplary for a restaurant which hadn't officially opened when visited. Dishes take inspiration from around the world and pretty much all the courses were to a standard that's worthy of an entry in the next Michelin guide and a handful of AA rosettes (We hope We don't jinx it now!). The food is really really good, We mean it. The only course we were underwhelmed by was dessert but that's not to say that it wasn't good, just that it wasn't as exciting as the other dishes. Staff were all very friendly and accomodating. We hope to return again soon to see how the menu changes as they say it changes daily. The restaurant is quite small so space between tables is limited. For toilets there are 2 cubicles, one male and one female. Annoyingly separate taps for hot and cold and the gents' toilet seat wouldn’t stay up!

Disclaimer: we were treated to free food and drinks. Fred says you should trust our views because we also give good belly rubs.