CitizenM is a Dutch hotel chain that started at Amsterdam Schipol airport. The Glasgow hotel was their first venture outside of the Netherlands and they have since opened internationally in London, New York and Paris, with another two opening in London (in that order). Their guiding principle is to create affordable luxury for the people (if they open in Moscow I wonder if it will be ComradeM instead!?). 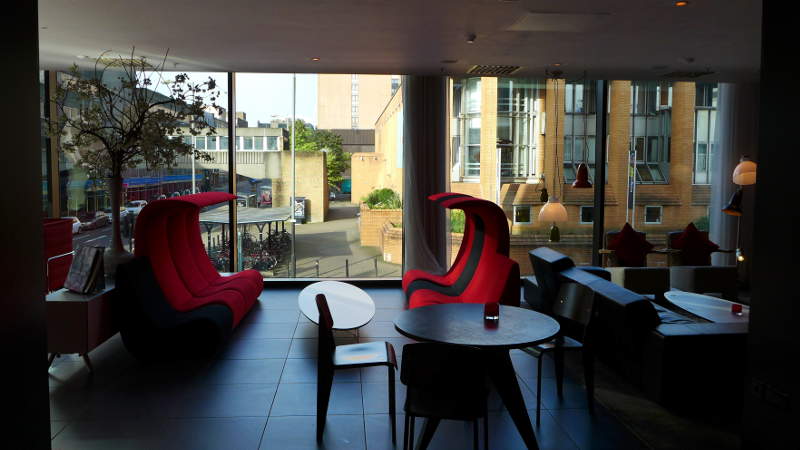 The meeting spaces are filled with a mix of interesting furniture and some of the areas can be hired out. 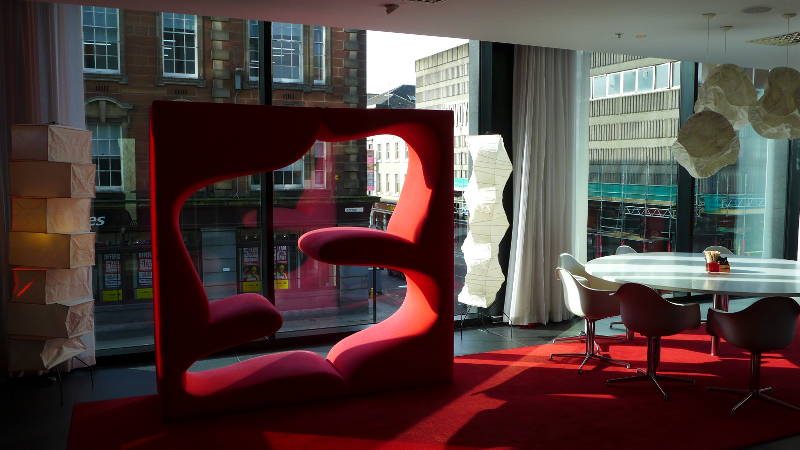 Checking in took less than a minute - you can check-in from 2pm and should check out by 11am but if you want a lie-in you can have the room until 4pm for an extra £29 - let staff know when checking in, though there's no reception as such, just some computers to the right when you come so you can check yourself in by entering some details from the booking and out pops a working keycard or you can ask a member of staff to do it for you - there's usually someone nearby. The doors are also open 24/7.

CitizenM is located on the top of a hill and has 7 floors with a couple of lifts. Our room was on the 6th floor. The rooms are self-contained "pod" style. We've stayed in a few of these before (where the toilet is actually within the same room as the bedroom), like Generator Hostel in Berlin, Qbic in Amsterdam and more recently the easyHotel in The Hague, so the rooms aren't massive but you should have everything you need and don't need to traipse too far to the loo! 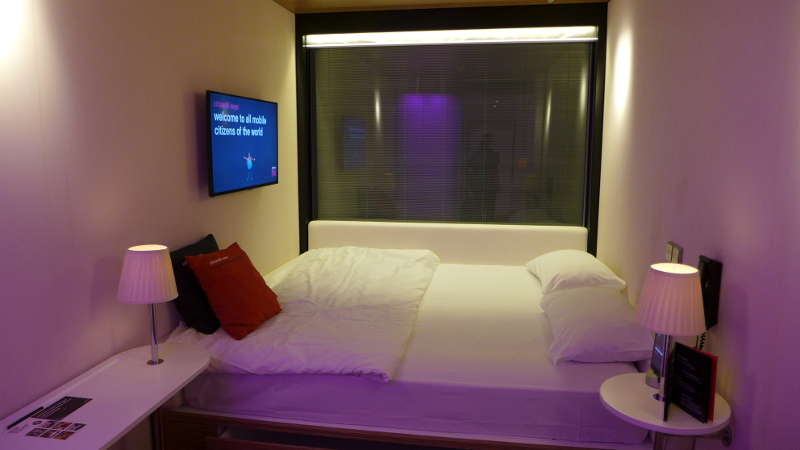 The room is compact, modern and clean. There's a comfy king-size bed, the window fills the width of the room with a view looking east towards Cineworld, the world's tallest cinema and the Townhead flats, rather than the city-centre as our room was on the side of the hotel and not the main south-facing facade. 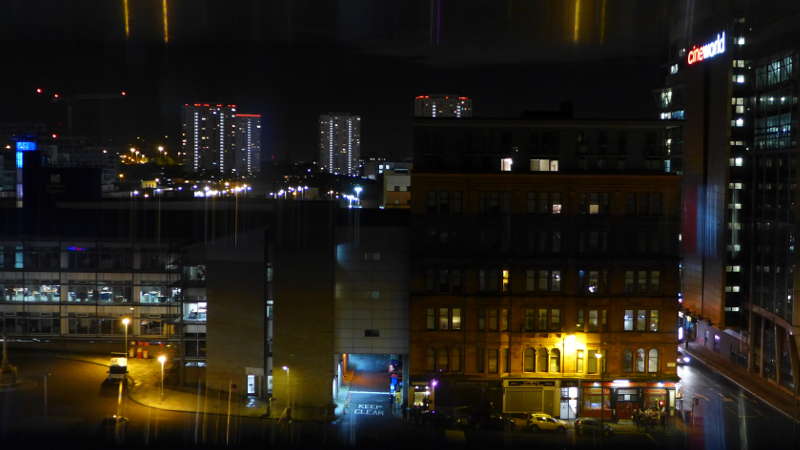 Probably the most useful and unique things in the room are sockets for overseas electronic equipment (US and EU). So if you forget an adapter fear not! 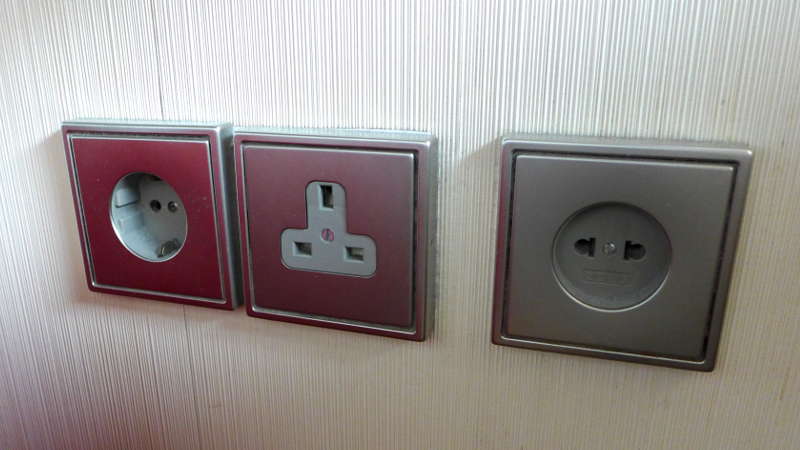 The en-suite (or should that be in-suite?!) is...bijou - I think that's the best word, still it's more spacious than a hostel bathroom in Hong Kong! The shower was easy to operate and a pleasant temperature. 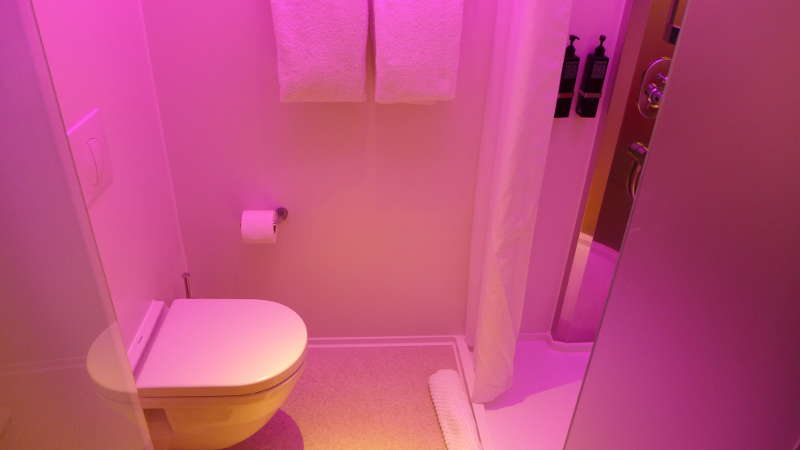 Curiously there were two shower gels, one for day-time use and one for night owls. I asked a member of staff about the differences between the two but she didn't even realise that the bottles were different (perhaps they are just the same? I probably should've used both of them though that may have upset my ying and yang!). 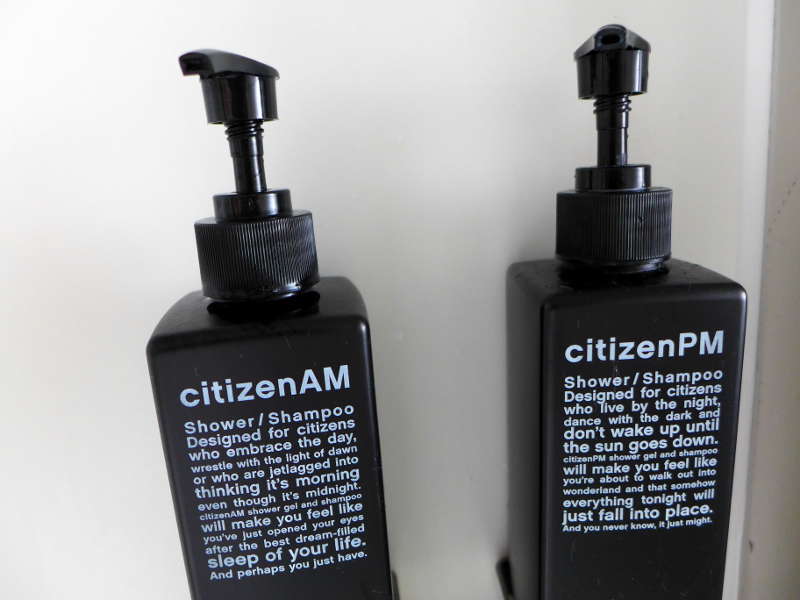 Other room facilities include a sink, hairdryer and there's storage under the bed, including a safe. 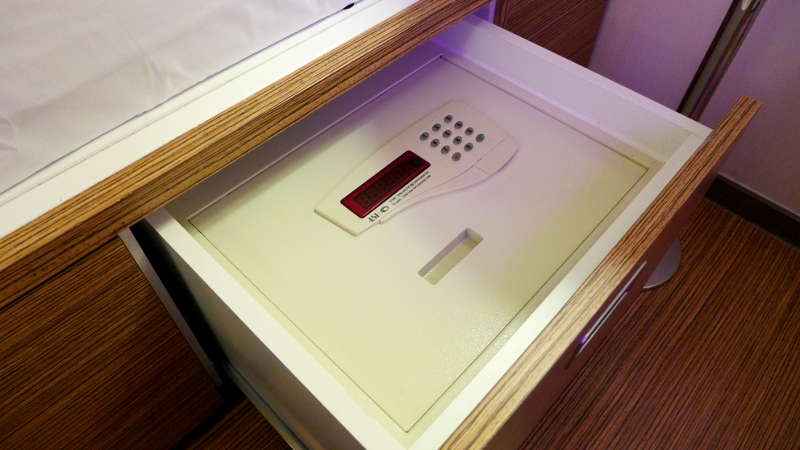 The room by default has a pinky/purple colour theme but you can change that. There are a number of moods to pick from - I wasn't convinced by the dodgy "love" setting though! 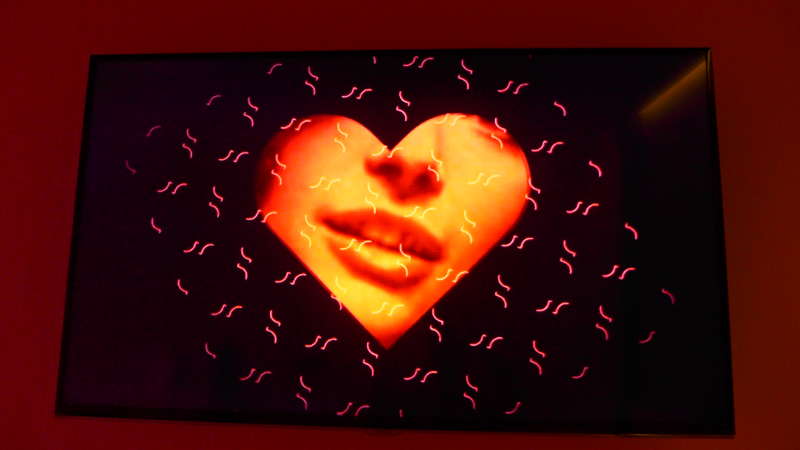 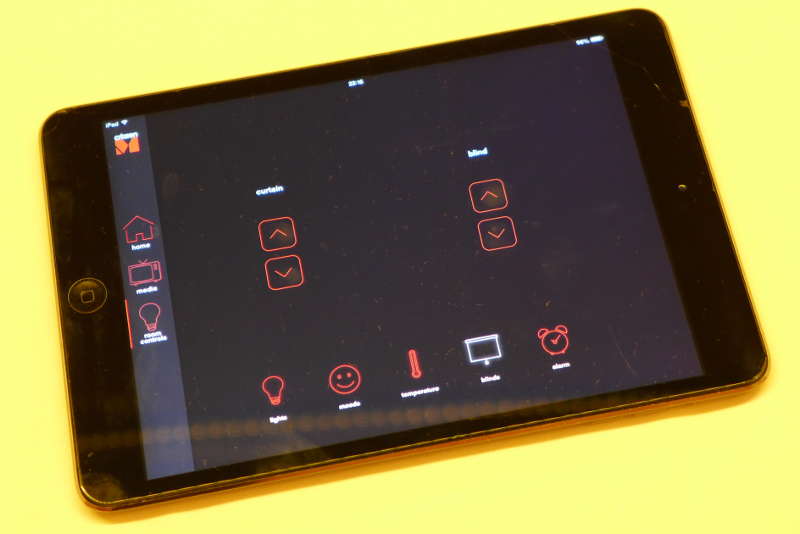 So, to adjust the room's ambiance to your preference, each room is equipped with an iPad mini tablet which is refered to as "the mood pad". From this device you can control the temperature, lighting, window blinds, set an alarm or watch TV or a movie. All the movies are free (including the adult ones!). 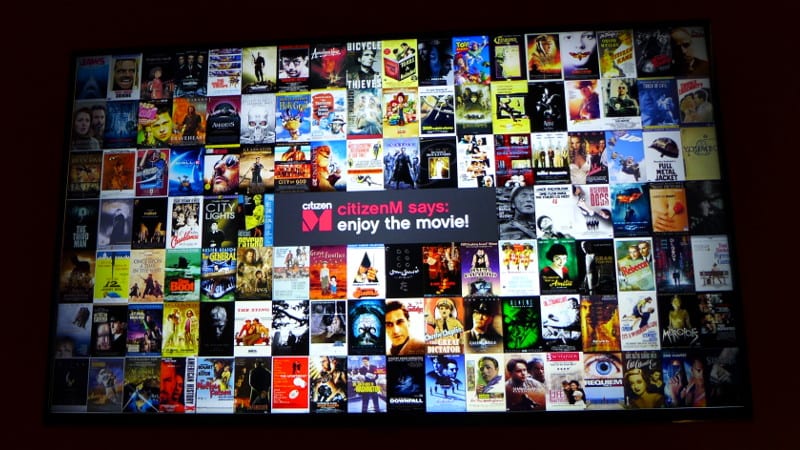 WiFi is free, fast and they're ok with you streaming Netflix etc. over the connection.
There's a 24 hour bar with food on the 1st floor (same place for breakfast) plus loads of meeting spaces. 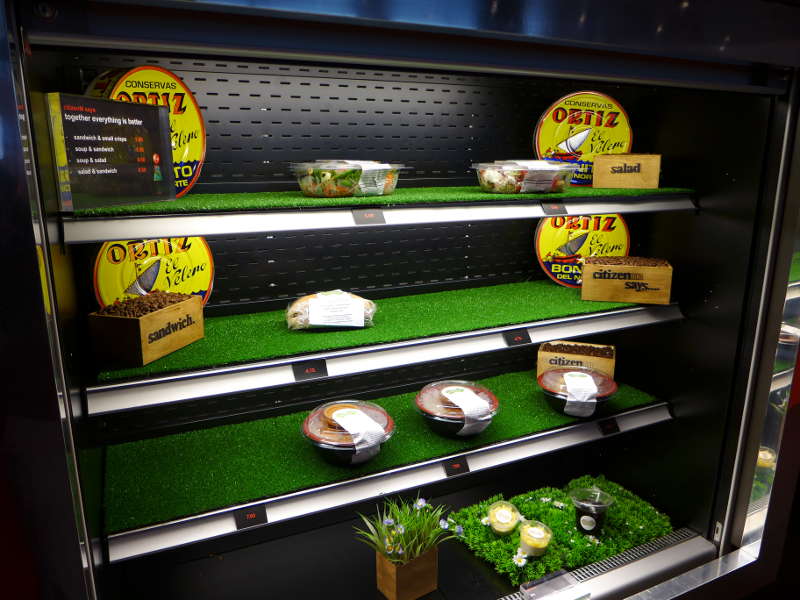 Sandwiches and salads can be procured at all hours of the night. The bar is also licensed and sells a few Brewdog beers. Tea and coffee is available 24/7. 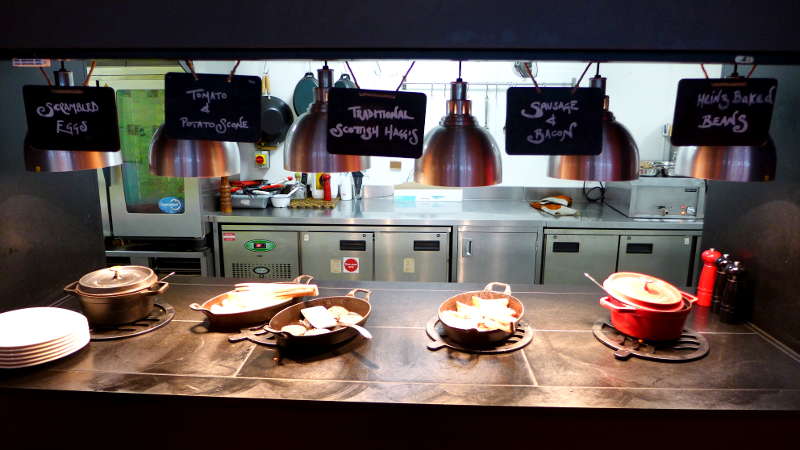 There's the usual breakfast items such as cereals, yogurts and hot items such as: scrambled eggs, tomato, potato scones (it is Scotland after all), haggis (as before), sausage, bacon and Heinz baked beans. 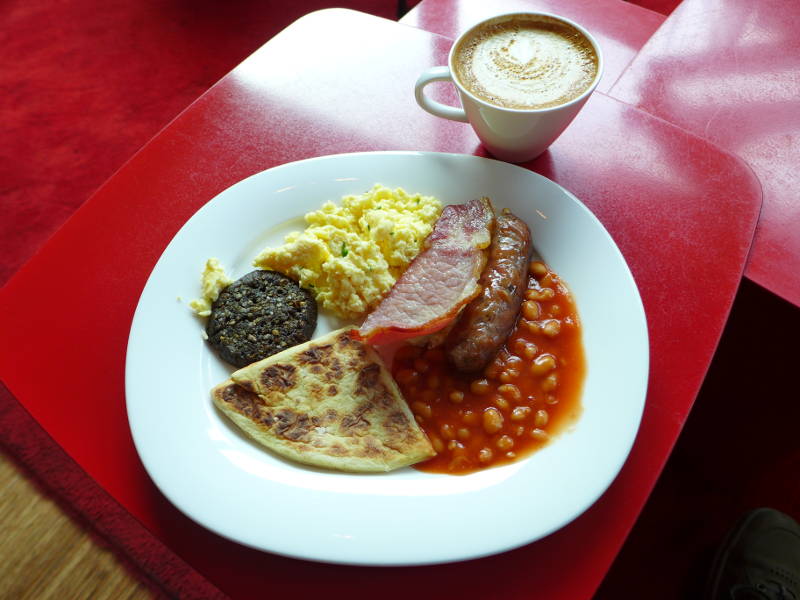 Here's what I assembled for my first course. It was pretty decent scran, not greasy or overly fatty with a good coffee on the side. But I had to go back up for something sweet... 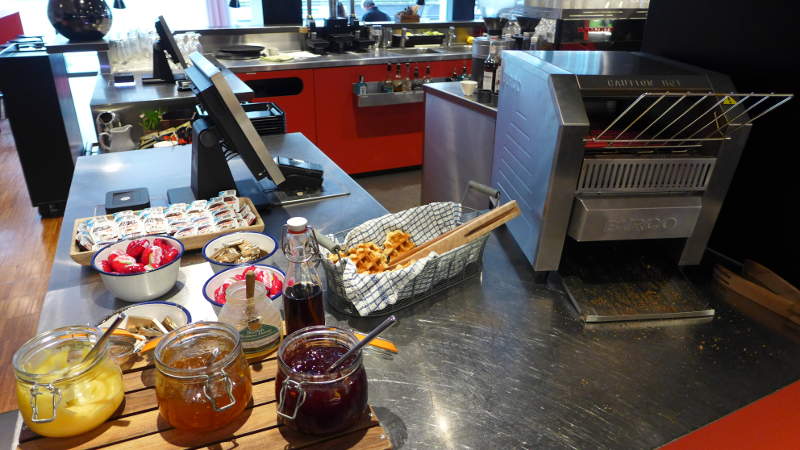 So I helped myself to some waffles, which you can grill yourself and eat with a selection of jams, fruit and honey. They also have some pastries on the opposite side.

CitizenM is a quirky modern hotel with a lot to recommend it. You can customise your room like no other hotel I've ever visited and I had a good sleep (possibly thanks to my chilled out mood lighting!), I didn't hear any of my neighbours or any traffic or noise from outside. The view from the room was pretty good too. Checking in and out was a doddle. Breakfast was fairly typical but nicely done. I hardly interacted with any staff but when I did they were nice and friendly. I'd highly recommend staying here, and the other hotels in the chain should be considered too.
Room prices start from £69 per night.

CitizenM is to the north of Glasgow's centre and within walking distance to the Glasgow School of Art, the Buchanan Galleries for shopping, and not just the Cineworld cinema but also the GFT for arty, independent or foreign-language movies. There are great restaurants nearby too such as Red Onion (Scottish), Sarti (Italian) and Rumours (Malaysian). Decent pubs nearby include Jacksons, The Raven and The Pot Still (whisky). The best coffee nearby can be had at Laboratorio Espresso, head to Cup tea lounge for fancy tea or for ethical coffee and cake head to The Project Cafe.

If you want to eat vegan food or go clubbing until 3am the Flying Duck is just around the corner (in fact you can see it from the window shot above).

Many thanks to GCMB for inviting me to stay at citizen M while I took part in the #PackMoreIn campaign.

Some buses pass the entrance and it's only a 5 minute walk to Buchanan Bus Station. Queen Street Station is a 10 minute walk away, while Glasgow Central Station is a bit further, around 15 minutes. The nearest subway station is Cowcaddens about a 10 min walk away. 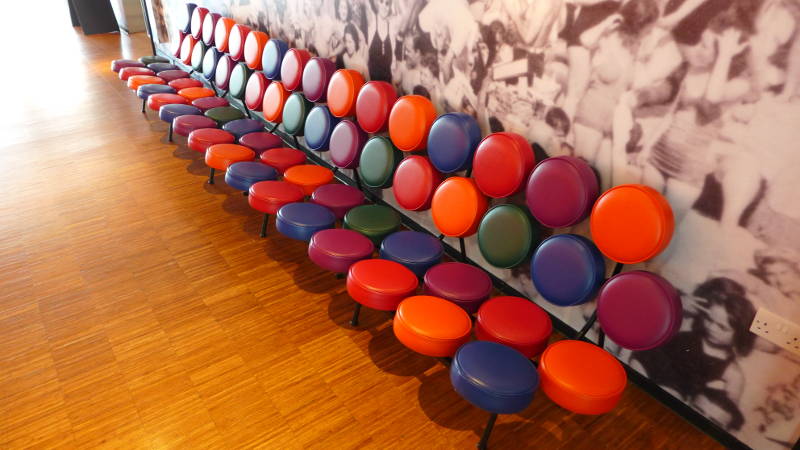