Remembering the city's dark past

The city of Glasgow wasn't an innocent bystander in the slave trade.  Signs of it can be seen quite clearly, from buildings to street names.  Have you heard of the Tobacco Lords of Glasgow?  Who were the merchants who gave the name to the Merchant City? What are the street names that link Glasgow to the slave trade era?  We will try to answer these questions and look at the history of the slave trade in Glasgow.  Learn from the past with this Glasgow slave trade trail. 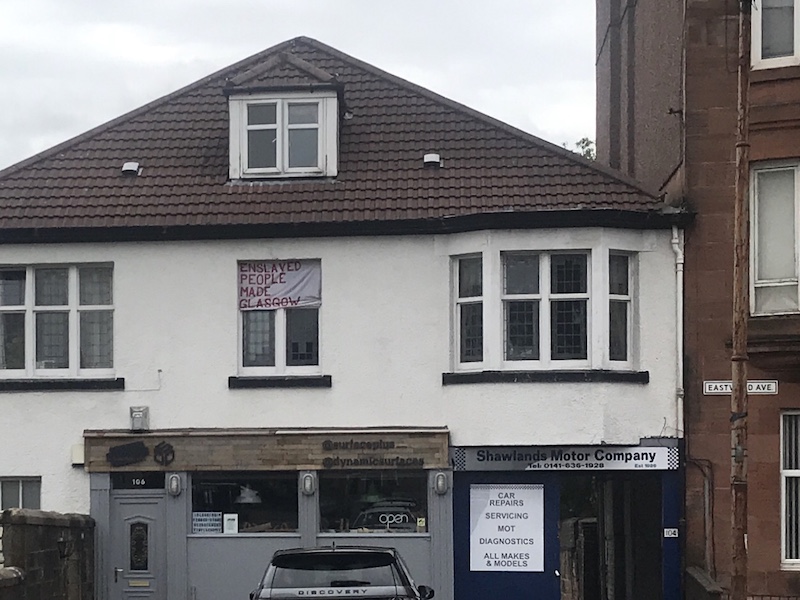 Where is the Merchant City?

The Merchant City in Glasgow dates back to the 1750s and is one of the oldest areas of Glasgow.  It was home to the warehouses and dwellings of the merchants who shipped tobacco, sugar and tea.  Nowadays it is home to a thriving  bar and restaurant scene ( at least it was pre-COVID...)

Who were the Tobacco Lords?

After the 1707 Treaty of Union between Scotland and England, Scottish merchants gained access to the English colonies.  Glasgow had two advantages.  First, the port in Glasgow had a 2-3 week advantage in using the trade winds to travel compared to other ports in Europe.  This along with the French monarchy granting a monopoly for the importation of tobacco into French territories in 1747 gave Glasgow a huge advantage. Tobacco was one of the items traded, alongside sugar, rum and tea.

A route called the Triangular Trade Route was established. Goods from Europe were traded with West Africa to be sold or exchanged. There, captive Africans were bought and taken to North American and the Caribbean and sold as slaves.  These enslaved people worked on the plantations which produced items such as tobacco, sugar, rum and cotton. These were shipped back to Britain where the process started again.

The tobacco lords became successful because they were able to monopolise tobacco and sugar crops. It is said that for 50 years from 1740 to 1790, Glasgow became the hub for the world’s tobacco - at times trading more than all the English ports put together.

As you can imagine, this created a lot of money.  The newly rich traders were called The Tobacco Lords.  Their names such as John Glassford are immortalised in the names of Glasgow streets.

It was legal to own a slave in Scotland until 1778.  Before then it was seen as fashionable for wealthy families to have their own "black boy or girl" to attend to their needs.  It was a status symbol.

There are 19 recorded slave voyages which left from the ports of Greenock and Port Glasgow over a sixty-year period from 1706 and 1766 said to carry around 2 to 3,000 people directly into slavery.

Even though slavery had been judged illegal in Britain, the slave trade system was allowed to continue in the British Empire.

In 2007, Glasgow Built Preservation Trust (GBPT), in partnership with Glasgow Anti Racist Alliance, developed an exhibition linking Glasgow’s built heritage with the slave trade. This grew into events as part of Glasgow’s Doors Open Days and a leaflet entitled "It wisnae us!" was released.

The University of Glasgow announced in 2018, that it would begin a programme of 'reparative justice'. It was discovered that the university had benefited from the equivalent of between £16.7 million and £198 million from the profits of slavery (via gifts and bequests) in the 18th and 19th centuries.

With Black Lives Matters protests in the news, the debate has risen again on whether or not Glasgow's streets should be renamed.  Should nothing be done?  Or should they be kept as they are but with plaques explaining their meaning to help with discussions - such as is seen in cities such as Paris and Berlin? Or should they be re-named completely?

Personally, I would like to see the streets with plaques explaining their naming.  Start a discussion and not try to eradicate part of the history of the city.

We have outlined a trail around the city centre of Glasgow explaining the street names and pointing out some buildings of interest. 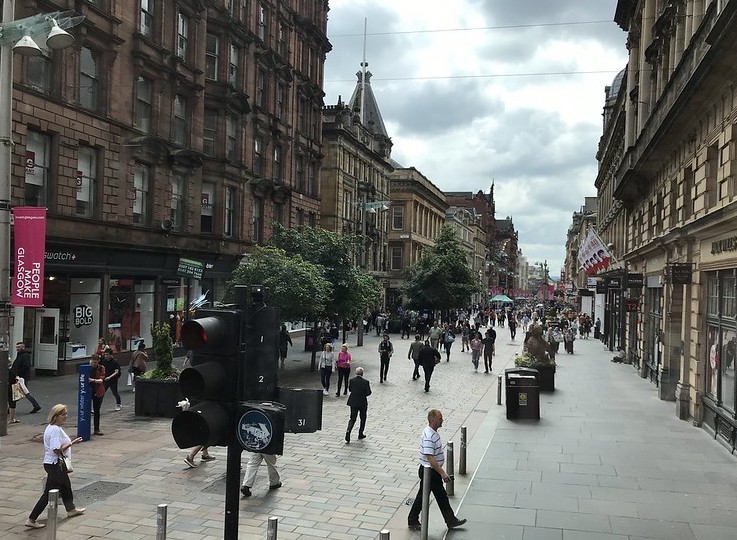 What is now the Gallery of Modern Art that was originally the Cunninghame Mansion which was a mansion for a single man, William Cunninghame of Lainshaw.  In 1780 it cost £10,000 to build, equivalent to around £1.5m today! His money came from the tobacco and sugar trade.

The mansion was purchased by the Royal Bank of Scotland in 1817 and was converted to become the new Exchange of the city.  Glasgow Corporation acquired the building in 1949 and moved Stirling's Library from Miller Street to here. In 1996 the building was converted to house the Gallery of Modern Art. 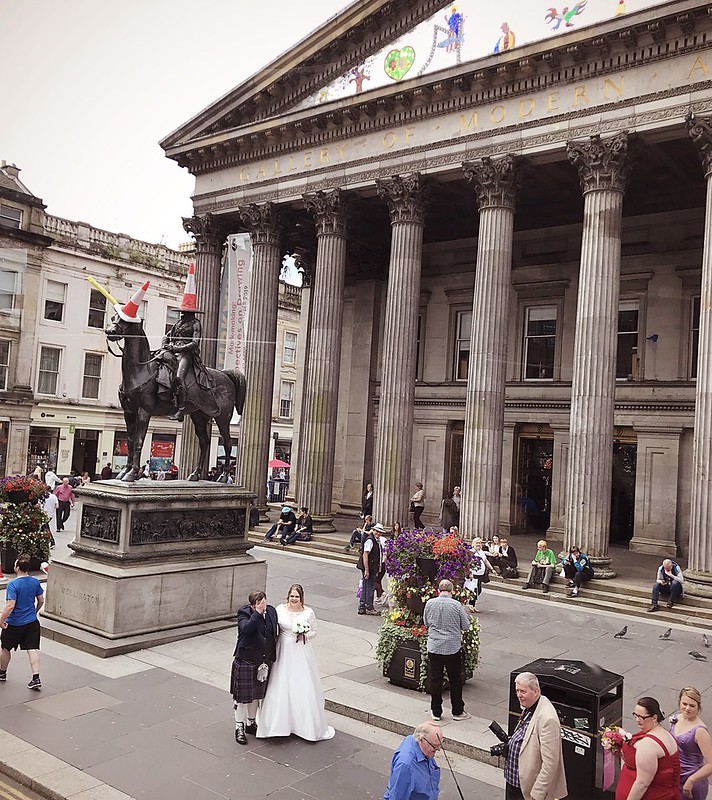 The Merchant City, as the name suggests, was where the merchants of Glasgow resided and carried out their business. It is here you will see most of the names associated with the slave trade.  Names such as Glassford Street, Virginia Street and more. 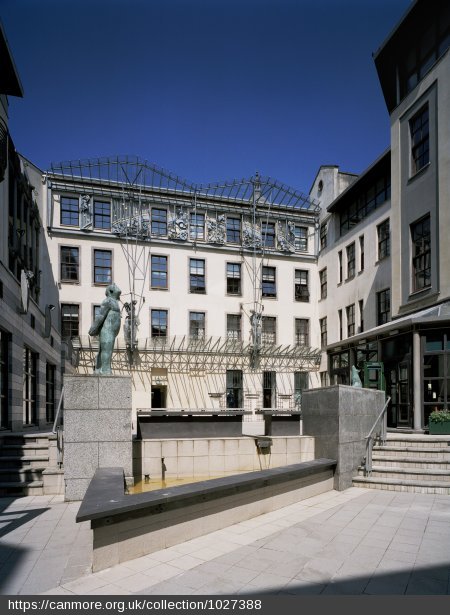 The Merchant’s House shows the power of Glasgow's merchants. The Merchants House is topped with a globe, with a sailing ship, flanked by two female figures.

A stunning building and worth joining a tour of the interior.  A grand building which reflects the power of what was once the largest empire in the world. 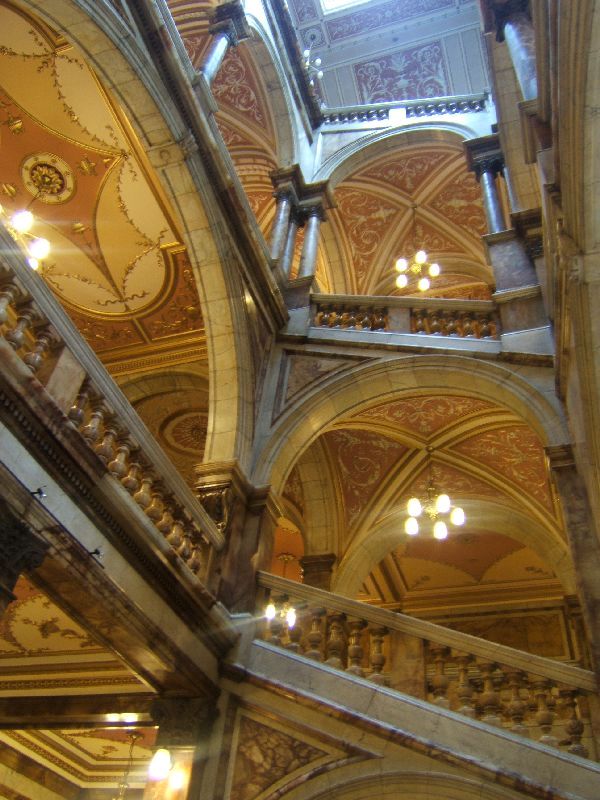 Outside of the City Chambers, you will find a statue to James Oswald.  He is from the family which had been deeply involved in the tobacco and sugar trades since the 1730s.  He supported the petition of 30,000 residents of the city to end the apprenticeship scheme in the West Indies that had continued a form of slavery. 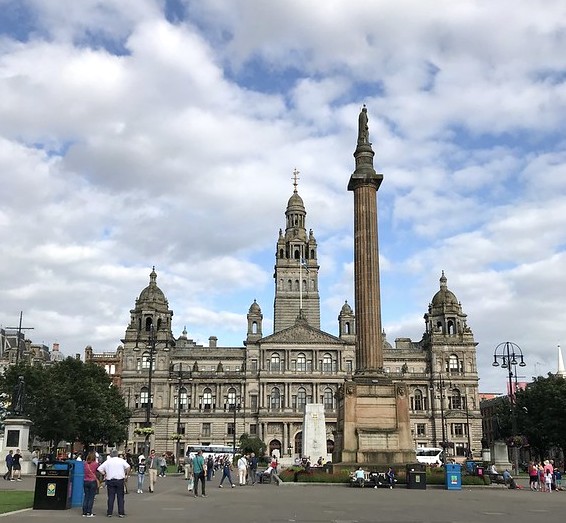 The Tobacco Merchant’s House is the oldest surviving house in the Merchant
City. The street is named after John Miller who was a land speculator.  42 Miller Street was the home of Robert Findlay of Easterhill.  He was a tobacco importer who lived there until 1802. The building was restored as offices by Glasgow Building Preservation Trust in 1995.

The Virginia Galleries was once at the heart of the commercial area of Glasgow.  Originally the Tobacco Exchange, and later the Sugar Exchange.  The building was demolished in 2003 after lying unused for 5 years due to subsidence and fears that the building may eventually collapse. Today, it is modern housing overlooking Virginia Court.

What is now The Corinthian was the site of Virginia Mansion.  It was originally built in 1752 for George Buchanan but demolished in 1842. The new building originally housed the Glasgow Ship Bank then in 1929 the building was converted into the city's High Court.  It was redeveloped in 1999 as The Corinthian, a bar, nightclub, casino and dining rooms. 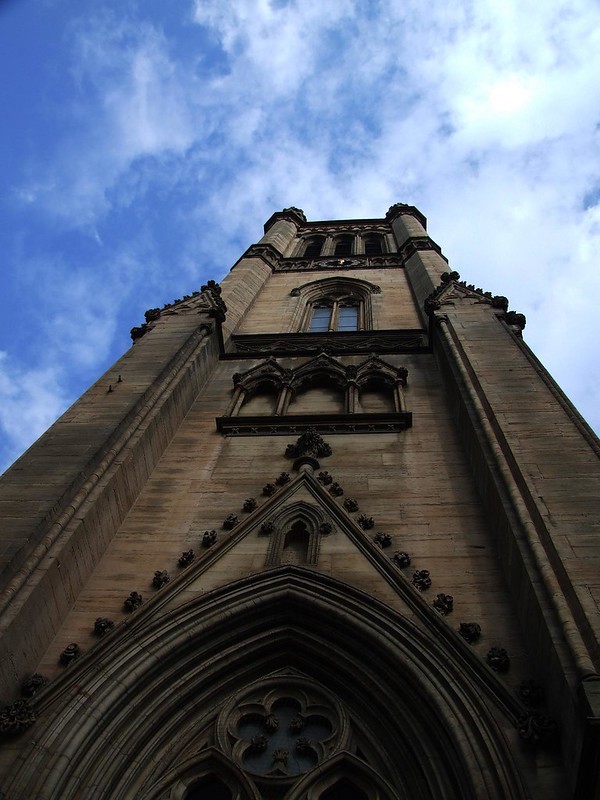 Built in 1826, Ramshorn Kirk and Graveyard is a resting point within the busy city centre.  The quiet Ramshorn Graveyard, which is open to the public, was a fashionable place to be buried for merchants. Two Tobacco Lords are buried here: John Glassford and Andrew Buchanan.  If you look on the pavement in Ingram Street you will see the initials RF & AF, this is the resting place of Robert and Andrew Foulis, Glasgow booksellers who opened 10 years before the more well known John Smith bookseller. 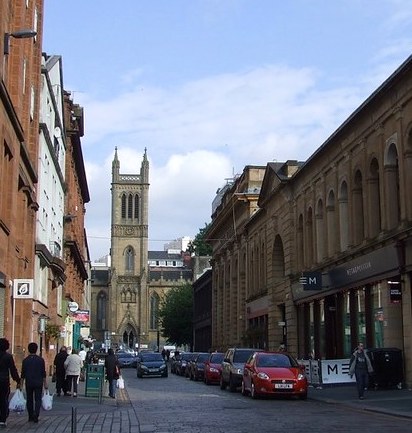 City Halls on the right-hand side with Ramshorn Kirk at the top of the street.

The City Halls hosted many rallies and anti-slavery meetings over the years.  One of which was the attendance of Harriet Beecher Stowe,  American abolitionist and author of Uncle Tom’s Cabin. 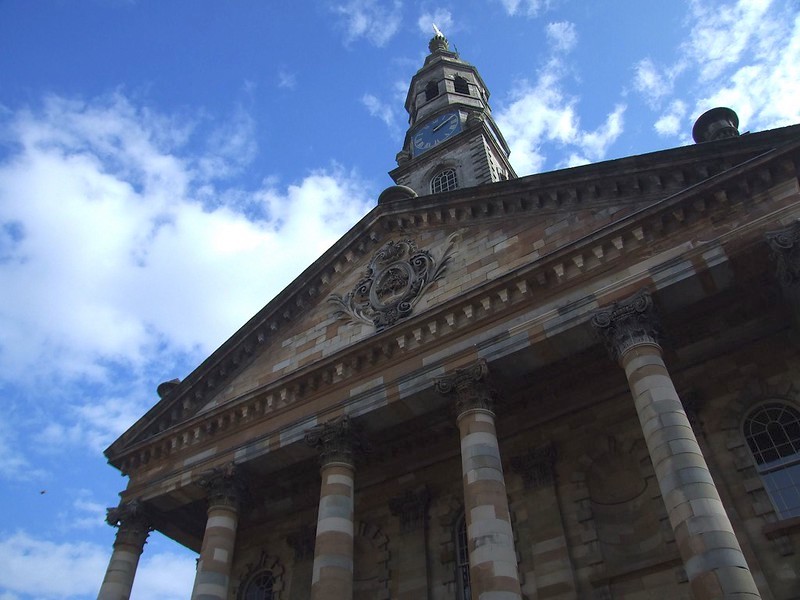 Laid out as a fashionable place to live and socialise.  Here you can find St. Andrew’s Church with the interior furnished with rich mahogany imported by slave ships from the West Indies. The area lost its position as a swish place to stay as residents moved to the West End. The church was redeveloped by The Glasgow Building Preservation Trust and is now Glasgow's Centre for Scottish Culture, promoting Scottish music, song and dance.

St Andrews by the Green 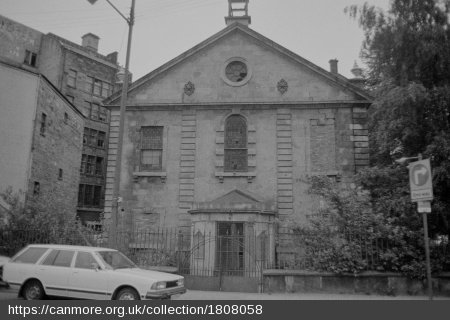 St Andrews by the Green also known as the Whistling Kirk.  The Oswald family (see Oswald Street) were involved in the foundation of the church. 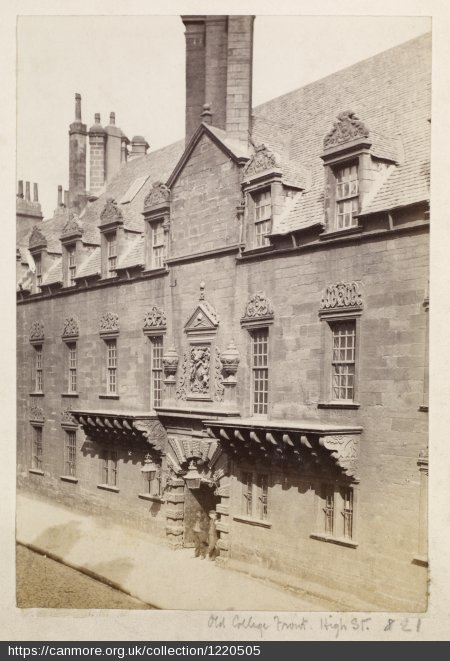 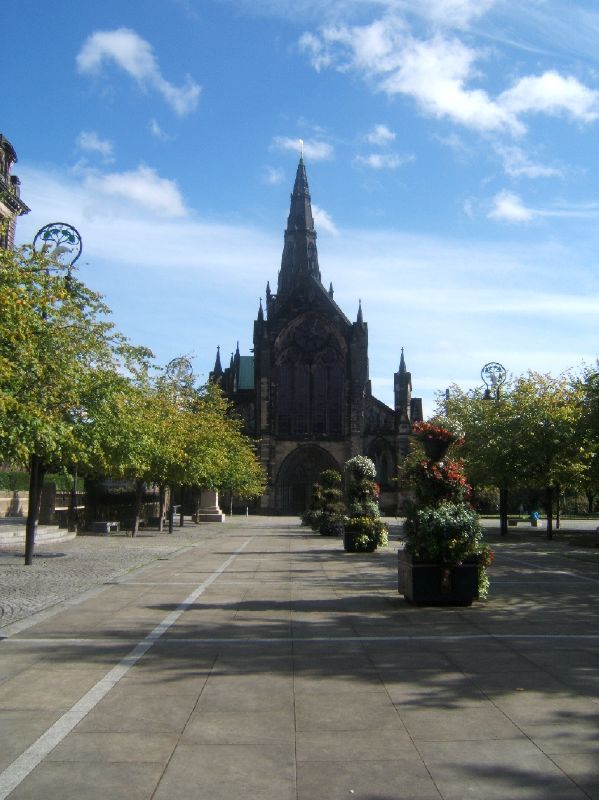 In the sacristry of Glasgow Cathedral is a large stained glass window dedicated to tobacco lord Alexander Speirs of Elderslie’.  There are also memorials to Sir James Stirling of Keir, who owned plantations and slaves in Jamaica, and to Andrew Cochrane, who owned the King Street Sugarhouse. The burial plot of Andrew Buchanan, after whom Buchanan Street is named and the Oswald family have a burial plot within the Cathedral. 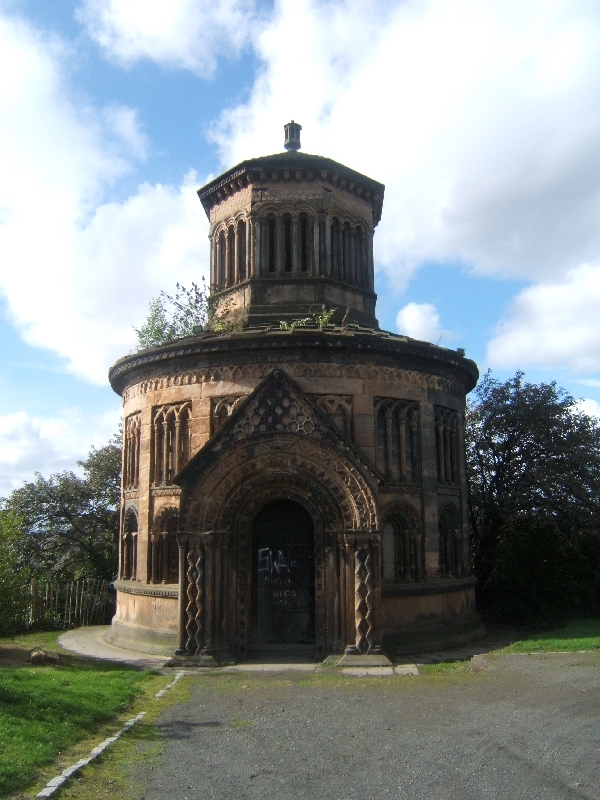 Under grand tombs and memorials, you will find the finest of Glasgow society.  Going across the bridge you will see a large plaque regarding the merchant’s guild. There are stunning views of the city from the Necropolis on this cemetery modelled on Pere-Lachaise in Paris. The Necropolis was opened in 1833, the idea of James Ewing, a prominent merchant. Ewing’s father owned the largest sugar plantation in Jamaica. He proposed the idea for The Necropolis in 1828, and The Merchants House took control of the project. The granite sarcophagus of James Ewing can be found in in the Necropolis.

Glasgow’s opposition to slavery is represented by the memorial to the Rev. Ralph Wardlaw who became one of the leading slavery emancipationists in Britain after 1833. 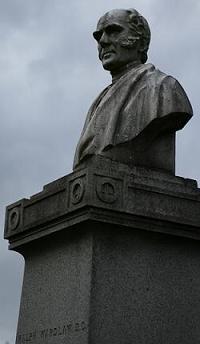 Cochrane Street
Named after Andrew Cochrane of Brighouse who was a wealthy tobacco merchant and also Lord Provost.

Elderslie Street
Named after Alexander Speirs of Elderslie owners of plantations in Virginia.

Glassford Street
Named after John Glassford. He owned plantations in Virginia and Maryland.

Gordon Street
Named after John Gordon of Aikenhead, who was a partner in tobacco and sugar trading firm Stirling, Gordon and Co.

Jamaica Street
Named after the country of Jamaica.

Oswald Street
The Oswald family had extensive links with the tobacco and sugar trades.Plantations in the Caribbean, Florida, and Bance Island in Sierra Leone, which he used as a base for transporting Africans into slavery in South Carolina.

Robertson Street
Named after John Robertson who had plantations in the Caribbean, and where the Plantation area of Kinning Park gets its name.

Tobago Street
Named after the island of Tobago in the Caribbean. 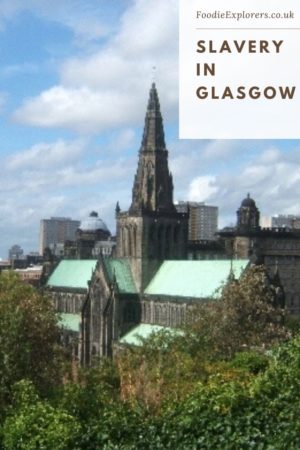