Ibérica do things a bit differently at Christmas. You won't find any turkey or Christmas pudding on their seasonal menu, instead over the Christmas period you can eat from the regular menu or a game menu which runs until the end of December.

If the thought of game doesn’t appeal to you, give it a go, these are tapas dishes after all so you can order one or two in between your favourite Spanish tapas. Also disregard any notion of hoity-toity pretentiousness as Ibérica is bright, colourful and welcoming. And if game doesn’t make you think of Spain remember that the original Valencian recipes for paella included duck and rabbit and most Brits only visit Spain in the summer when restaurant menus can be massively different from winter - when you will find game on offer! So will it be traditional turkey or authentic Spanish for Christmas?

We ventured along to our local Ibérica in Glasgow to sample the new dishes, which are available at the restaurants in Leeds, London and Manchester as well. 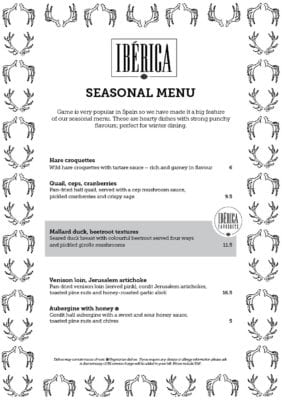 You know when you can’t decide what to have so you just order the whole menu? Well, we did that with all five of these tapas soon coming our way. We also had a glass of Sers Somontano Fuerza 20 wine from 2016 to accompany our food. This was a smooth red, ideally suited to game with a spicy aroma and vanilla and dark berry flavours. 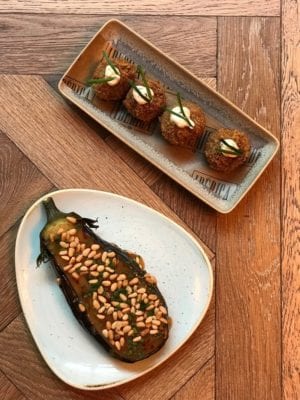 The Hare croquettes (£6), top right, were like haggis bon bons but with a softer texture and pâté-like meaty interior, mixed with cinnamon, chocolate and sherry they might sound quite dry but actually they were smooth and sweet so not as strong-tasting as we were expecting making them surprisingly snackable!

The Aubergine with honey (£5), underneath the croquettes above, was even more of a surprise. Who'd have expected to see aubergine on a game menu, especially when it’s mixed with miso paste and topped pine nuts, hmm unusual! We're big fans of Japanese cuisine so lapped up with this unexpected "fusion" dish. Texture-wise the aubergine was soft and almost dessert-like with a healthy sprinkling of crunchy pine nuts on top. A savoury umami flavour was evident from the miso but at the same time it was sweet due to the honey. This is something we now want to try replicating at home! 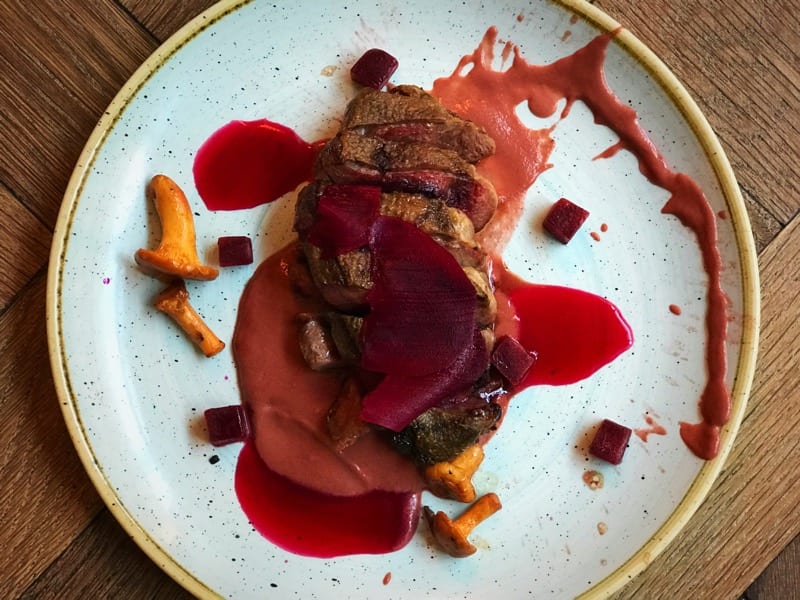 The Mallard duck with beetroot textures (£11.50) on the plate looks a bit violent, as if the poor bird had just been shot! It was cooked nice and pink with a flavoursome Maillard (sic) skin. Add some beetroot purée, beetroot gel, pickled beetroot and beetroot cubes for earthiness and finish with girolle mushrooms (they are mad on mushrooms in northern Spain we discovered on a recent trip there) and you have a really tasty dish. 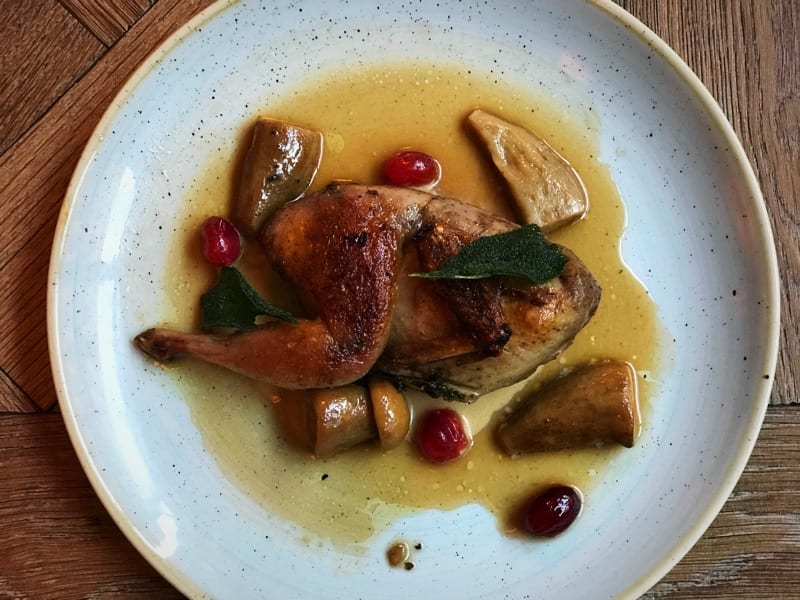 The pan-fried half Quail (£9.50) also came with mushrooms, ceps this time, alongside pickled cranberries and sage. This felt very much like a festive dish and maybe one for Christmas Day at home. It was extremely tasty but being a small bird on the bone it was a little cumbersome to extract all the meat! 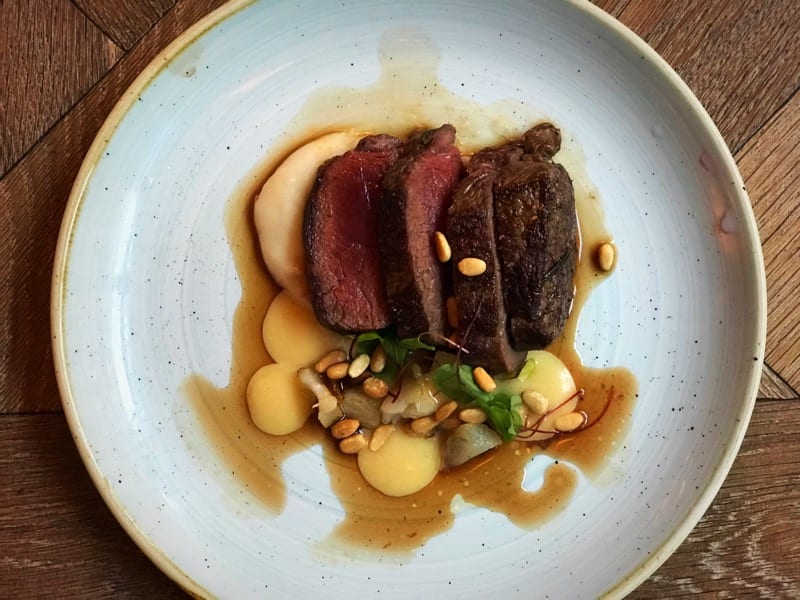 The Venison loin (£16.50) on a bed of confit Jerusalem artichoke (which I love!) was pan-fried and pink served with honey-roasted garlic aioli and topped with a smattering of toasted pine nuts. This was my favourite dish of the night.

We stayed for pudding and our server recommended a glass of cider with these, but this was no ordinary cider! The Diamantes de Hielo (£9 for a glass or £43.50 for a bottle!) from Asturia (the Spanish region best known for quality cider) is a clear dark red/brown colour so looks more like port or sherry, in fact, it tastes more like a fortified wine too! It's robust - it is 11.5% (ooft!) and sweet with an unusual aroma, reminiscent of HP fruit sauce and a taste more akin to prunes and raisins than apples! At £9 a glass this is expensive stuff but think of it as being on the same level as a dessert wine, it's not something to be knocked back quickly and is probably the most unusual cider we've ever tasted so should be savoured slowly! 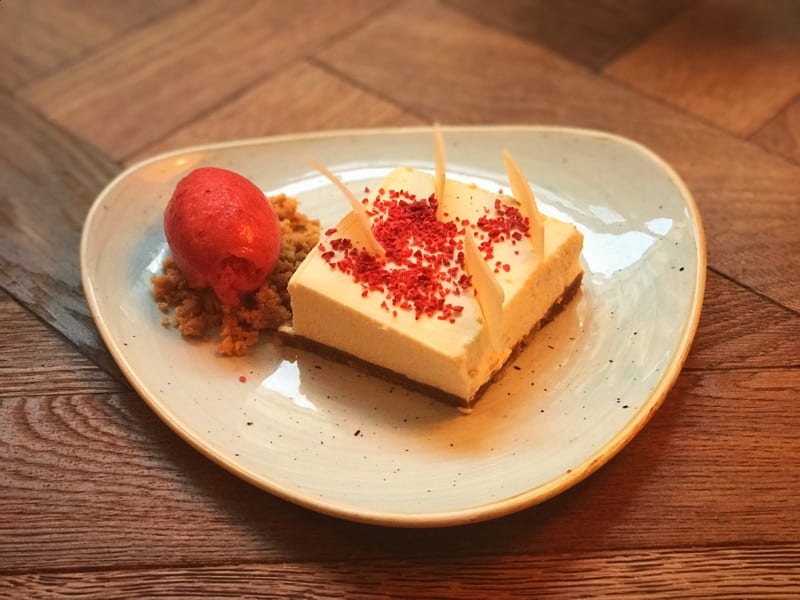 I’m a sucker for cheesecake, even more so when it’s slightly unusual like this - Parmesan on a cheesecake? Perhaps a bit of a novelty and probably isn’t a common sight in Spain but it was smooth, sweet and cheesy, yes that’s four Parmesan shavings atop my pudding as well. The base was like a thin fudge with crunch for a bit of bit of texture. 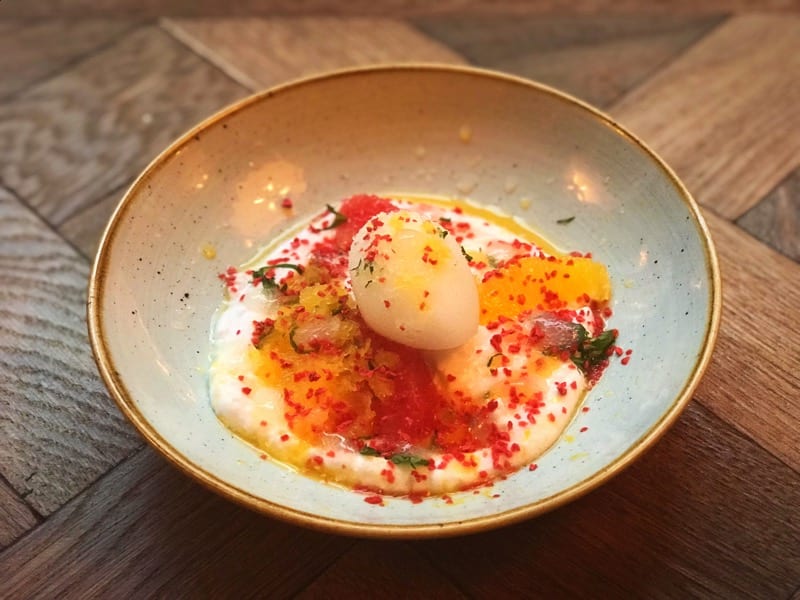 The playfulness of the desserts continued with (looking a bit like something from a child’s party!) the aptly-named Zesty Citrus Fruity Finish (£4.50) which achieved what it set out to! Grapefruit, orange, coconut foam and lemon ice cream...zesty and citric indeed thanks to the grapefruit, orange and tart lemon sorbet with some creaminess provided by the coconut. It was delicious.

So good. All the food from the game menu was cooked and presented brilliantly, the desserts were a good finish to the meal and the drinks were ace too - Ibérica have an excellent selection of Spanish wine, beer, cider and sherry. Service was impeccable, all our food was served in around 90 minutes, and the meal filled our bellies quite nicely. We’ve been to Ibérica four times now and it hasn’t disappointed yet - we will aim to get a review of the regular menu up soon too! If you do decide to visit for the game menu we recommend ordering a tortilla and they give you the option of how you’d like it cooked unlikely most tapas restaurants in Glasgow!

The toilets are downstairs in individual male/female cubicles, as they would be in a restaurant in Spain and are probably the smartest toilets in the whole of Glasgow!

The game menu runs from now until 31st December but please note that the restaurant will be closed on 24th, 25th and 26th December.

Disclaimer: we received a complimentary lunch courtesy of the kind folk at Ibérica but as soon as Fred saw the photos of the quail, duck and venison he believed every word (even though he can’t cant read or understand English!).