Honest food in the honest toun

Musselburgh is the largest town in East Lothian and was first settled by the Romans sometime after AD 80. They built a fort and the original bridge across the River Esk, which has been re-built many times on the same spot and is still known colloquially as the 'Roman Bridge', so it would seem fitting that our first-ever foray into the town would be to eat at a new restaurant run by the Scots-Italian Crolla family. Even more appropriate is that the name ' Musselburgh' actually does derive from that popular edible mollusc, so prominent along the coast here, thus Musselburgh is quite literally the 'Mussel town' which surely qualifies it as one of the best places in the country to eat seafood? The town also has the nickname 'the honest toun' so we looked forward to some good, honest food.

East Coast began life as a fish & chip shop, now an award-winning one that recently expanded into the premises next door to open a seafood and grill restaurant. The new restaurant has a dedicated entrance and looks new, modern and airy, with a nod to the sea - look out for lights which resemble glass floats, ropes and patterns, which might suggest the shape of fish or waves.

It was a short, chilly walk from the bus stop but nice and cosy once inside. We were quickly seated and advised that halibut was the catch of the day (yay) but there was no lobster (aww). Their menu, funnily enough, has a Mussels section with a choice of three sauces including the curried and spiced "Roman Bridge" . 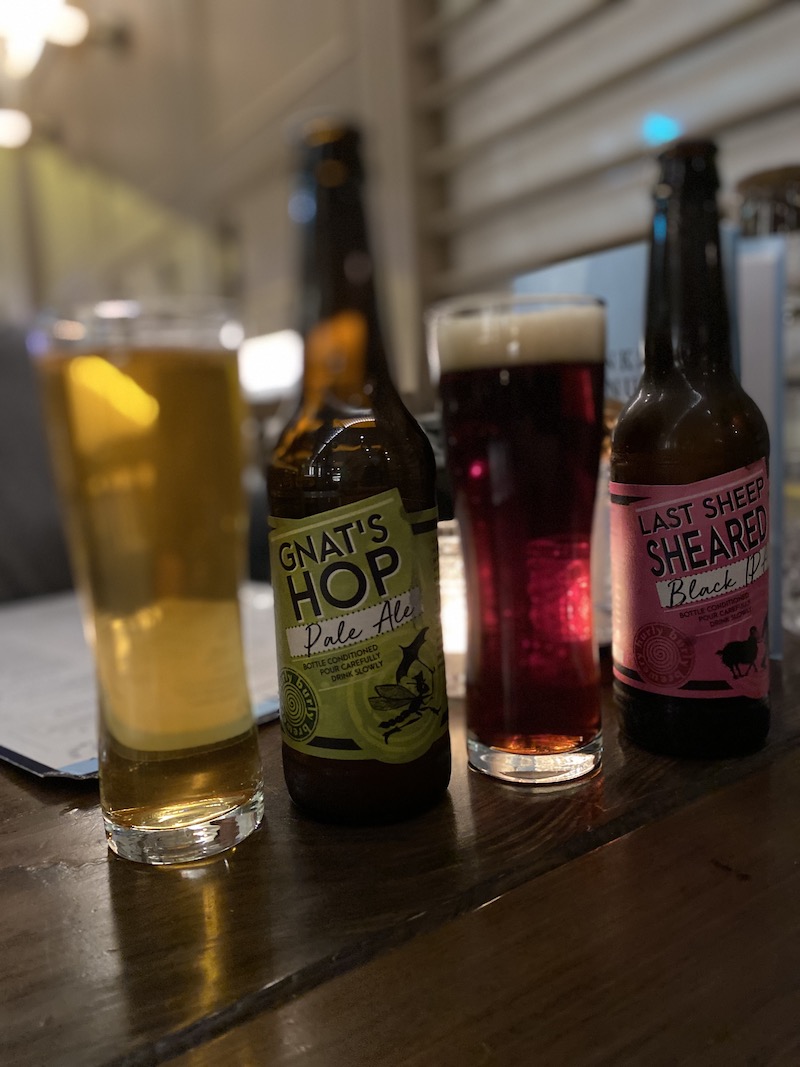 We did also note a number of local drinks available so ordered up a couple of beers from the Hurly Burly Brewery, which is located in the outskirts of Musselburgh. We had a Gnat's Hop, a lightly hopped biscuity pale ale; and a Last Sheep Sheared, a dark red ale with a spicy, malty aroma and taste with a bitter finish.

They also had Fidra gin, an award-winning gin from East Lothian which is named after one of the islands popular with seabirds in the Firth of Forth.

House Beer battered King prawns (£9.95)
Smoked Paprika Mayo, rocket salad, sesame seeds and a wedge of lemon.
Absolutely massive plump prawns, huge lemon wedges and a dip, which took me back to my childhood as it reminded me of Skips crisps! The batter was perfect and really crisp.

Harbour Bowl (£22.95)
Fried calamari, beer-battered king prawns, battered catch of the day (halibut), grilled tiger prawns, skinny fries, tartare sauce and lemon. A massive assortment of fried goodness on one plate. The chips, surprisingly, weren't typical chippy chips but the rest had all the hallmarks of a posh, upmarket chip shop. The calamari was a wee bit rubbery though.

We love saffron, it’s a delicate thing, a little goes a long well but this was quite overpowering. Mark‘s favourite dish at La Lanterna in Glasgow is the monkfish wrapped in Parma ham with tagliatelle, which is why he went for this dish but the saffron just needed to be toned down a bit. Plenty of rice though so very filling.

We didn't have time for pudding unfortunately as we had to get home to Glasgow via public transport, and on a Sunday of all days! 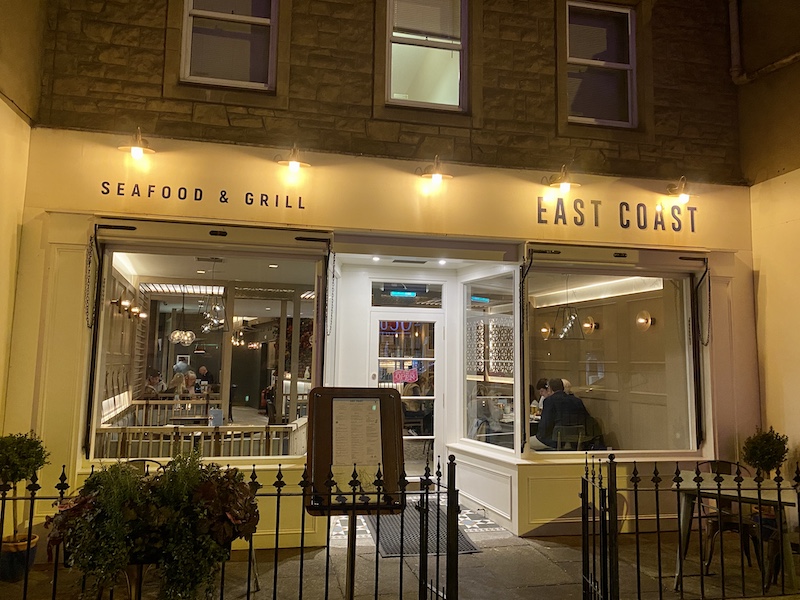 East Coast was excellent overall. As the town's nickname implies, this is good honest cooking, whether you are looking for just fish & chips or something fancier then East Coast delivers a quality experience. Our only complaints were minor. We didn't have pudding so can't comment on that but if you live in the area then you can order for collection from the takeaway next door or if you live further away like us and fancy a wee day out (there is a beach) then it's an ideal spot for lunch or dinner. There is no onsite parking but there is a bus stop right at the Brunton Theatre a little further down the High street (see below for bus info). Service was friendly and well-paced. Toilets were clean and in good order. Also of note, background music during our visit was inoffensive chart music.

Getting there by public transport

Disclaimer: we received a complimentary meal.