TOMATIN REVEAL THE “INGREDIENTS” OF SCOTLAND FOR WORLD WHISKY DAY

In celebration of World Whisky Day (May 20th), Tomatin Distillery has revealed the “ingredients” of Scotland – home of Scotch whisky.

The distillery, located in the Scottish Highlands, commissioned leading DNA experts Source BioScience to investigate the genetic composition of Scotland’s 5.3 million population – and with staggering results!

The research, displayed on Tomatin’s specially created “100% Scotch” label, revealed that the average Scot* is majority Beaker People (35%) and Germanic (22%), with some Norse Viking (9%) and Neolithic Farmer (3%) thrown in for good measure! 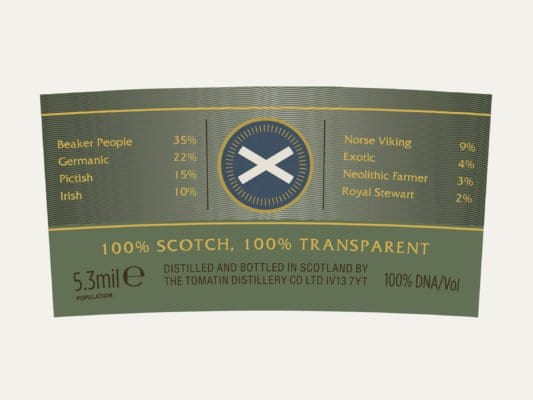 ‘Exotic’ ancestry was also found in the sample of almost 1000 people, which refers to African and South Asian groups. While the 2% Royal Stewart ancestry refers to descendants from Sir John Stewart of Bonkyll – a military commander during the first Scottish War of Independence and the Battle of Falkirk.

Tomatin Marketing Manager Jennifer Masson, said, “Transparency within the whisky industry has been a hot topic over the past year, so we thought we’d have a bit of fun with it in celebration of World Whisky Day.

“At Tomatin, we know exactly what goes into each whisky, and we’re always happy to share that information when requested, but we wanted to know what makes our wee nation – and the home of the Scotch – so distinctive. The results are absolutely fascinating and have caused quite a stir online already.”

Source BioScience Senior Geneticist, Dr Angelika Kritz said, “Scotland’s DNA is a rich and varied mixture of lineages which settled here at different times in the past. From the first farmers who arrived in the Neolithic period, to the more recent Norse Vikings – Scotland’s rich history is most certainly reflected in its diverse lineage and heritage that make up its people today.”

Tomatin’s 36-year-old was recently voted ‘Best Scotch in the World’, available from select independent stores throughout the UK.

To request the ingredients of any Tomatin whisky and to shop the full range, please visit: www.tomatin.com