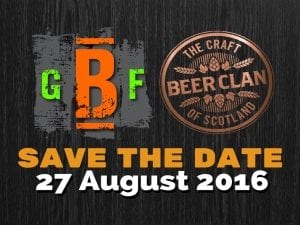 The Craft Beer Clan of Scotland have teamed up with renowned Glasgow Hutchesons' Aloysians RFC to promote the Giffnock Beer Festival (GBF) this August.

The event, which takes place on August 27, will see a world-class selection of craft brewers and distillers take the field at GHA’s grounds. The starting line-up includes Glasgow breweries WEST , Drygate, Jaw Brew and local micro- brewery Clockwork who boast a strong and loyal following among beer lovers in the city’s southside.

Braving the east-west rivalry at the GBF will be the Edinburgh Beer Factory, along with one of the Craft Beer Clan’s latest signings, Borders brewery Tempest, renowned for their innovative and adventurous beers. Fresh from winning Champion Beer of Britain, Loch Lomond Brewery also makes the GBF squad.

Forming a solid back row of wines, spirits and ciders will be the Bijou Wine Company, Dunbar’s Thistly Cross Cider, and the Glasgow Distillery Company, who will be unleashing their internationally renowned gin, Makar.

The GBF will also coincide with a major rugby match between GHA’s first XV and a league rival, with the opportunity to spectate the crunch game also included in the beer festival’s £8/5 entrance fee.

Organisers also said that although the GBF features some of Scotland’s best craft breweries and distilleries, the event was firmly focused on being family friendly.

Claire Marchelletta, Business Manager of GHA said: “As well as a superb offering of drinks for the grown-ups and a First XV match for the rugby fans, we’ll have loads for children too. There’ll be fairground rides, face painting, balloon artists, glitter tattooists and a few other surprises to keep children, and indeed the grown-ups, entertained!”

Ms Marchelletta said: “Last year we held the inaugural Giffnock Beer Festival and it was brilliant, with everyone enjoying the rugby and some cracking beers. This year, with the Craft Beer Clan of Scotland lending their support, we’re predicting a home victory for GHA.”

Ms Marchelletta said the event was established last year to raise funds for the GHA and proceeds would be used to support the club, which itself plays a vital part in the community through its various clubs, school programmes, youth matches and junior leagues.

Chris Miller, Director of the Craft Beer Clan of Scotland, said: “The Craft Beer Clan came together in the spirit of collaboration and community, so it’s hugely rewarding for us to be able to support the GHA through playing a part in the Giffnock Beer Festival.

“We want to see beer and rugby fans coming down here on the day and showing their support for this great team, for what it does in the community, and for these great breweries who are frankly world class and in a league of their own.”