Shaken but not stirred

Go to New York they said. All the food is amazing they said.

Dismayed by Five Guys' contribution to burger boulevard, burger block, burgertopia (or whatever it's called now) in Glasgow we'd set a goal of eating in a few American burger chains whilst on holiday in NYC. So it would seem fitting to visit Shake Shack right where they started in Madison Square Park, and being tourists and all, we planned to take photos of the iconic Flat Iron building from all angles - it's just across the road.

Perhaps we chose the wrong day to visit, as it was not just dull and cold but regrettably wet as the original Shake Shack, which is a shack of sorts, isn't really designed for rainy days. The staff are inside but you queue and order in the cold outdoors, there is seating here too but it was unsurprisingly wet so, once we received our burger, we huddled beside the condiments, where there is at least some cover. You see, the majority of the awning overhead is full of holes. Yeah that big roof thing is a complete waste of time as it serves no useful function. 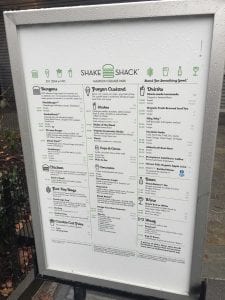 Ordering was easy enough and I was surprised to find that Brooklyn Brewery brew a 'Shackmeister® Ale' for them ($5.69 for 16oz, $7.69 for 24oz), so we ordered a small one, along with a $2.80 soda and a single Shackburger ($5.95) with crinkle cut cheese fries between us ($3.99). We shared this as we had lots of food to cram into our short "vacation"! Including tax, but excluding tip, our bill was $19.34 which is expensive for this level of food. 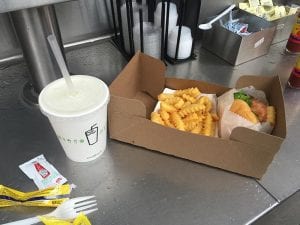 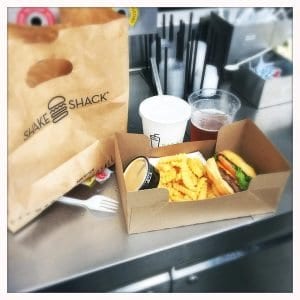 The bun was of the doughy brioche variety, the burger was excessively greasy, soft and watery...was it leaking in the kitchen too? And they forgot to make our fries cheesey, though they did plop some hot nacho cheese dip into a tub when I returned with the receipt in hand. The dip wasn't actually hot at all and the crinkle cut fries? Well they were pretty meh...and the beer? It was flat-tasting and probably the poorest I've had from Brooklyn. It's occasions like this where I wonder what people see in places like this. We had high hopes but ended up feeding the soggy fries to the grey squirrels in the park. 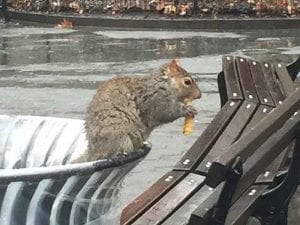 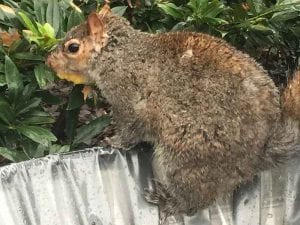 Shake Shack actually do have quite an inspiring story, so it's a shame that our meal really didn't have any redeeming qualities. Review-wise they have a ton of positive comments online but if you've never been before I really wouldn't rush - certainly not if it's raining.

TL;DR
+ The squirrels were entertaining and provided some good photo ops

- Damn shack is full of holes so if it rains you get wet!
- The burger was greasy and soggy
- The fries were pretty poor
- The beer was flat and tasteless
- The hot sauce was as hot as an eskimo's thermostat