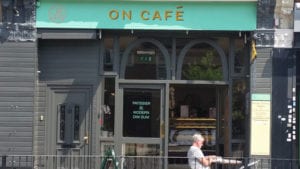 On Cafe and Modern Dim Sum

Dim Sum are the small plates of China. Plates to share with family and friends over a long leisurely weekend lunch. The problem with a lot of restaurant Dim Sum is that they are factory produced and straight out of the freezer. Even when fresh, ready made Dim Sum tend to be packed with monosodium glutamate (MSG). As a result, they can all end up tasting the same. Enter Loretta Liu and Cafe On.

Loretta Liu grew up in multicultural Singapore and was exposed to many different foods and flavours from a young age. She went on to become a patisserie working and teaching with the likes of the likes of Pierre Gagnaire, Frederic Bau, Alain Ducasse, Raymond Blanc's and Jean Christopher Novelli . More recently, Loretta started On Cafe where she makes and supplies macarons to individuals and retailers such as Harvey Nichols and Michelin-starred restaurants, including Jason Atherton's Pollen and provides high-quality Dim Sum in a relaxed cafe atmosphere.

So what happens when you take all that talent and experience and focus it on something seemingly as simple as Dim Sum? The answer is you create Modern Dim Sum.

Out goes MSG and dishes laden with salt and sugar. In come fresh flavours subtly seasoned using herbs and spices that provide you with a healthy meal that is both light and satisfying; a meal that leaves you with a fresh aftertaste rather than heartburn.

Loretta told me that the lack of MSG surprises some people. The food tastes different; every dish tastes different. In deserts too Loretta's aim is to create patisserie that are a treat, not a package of empty calories. Sugar is a seasoning to be added with care, not a starting point. Cream cakes may be "traditional", but they are really just buns filled with cheap dairy fat rather than crafted quality ingredients.

So how did all this work out in practice? 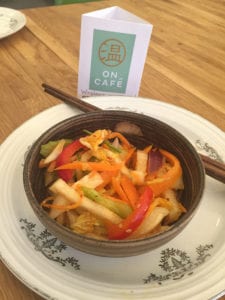 The first good sign was the appetiser. Forget MSG laden prawn crackers. Instead, a bowl of homemade Kimchi. Light, crunchy and packed with probiotics. The perfect wake up call to tell your tum something good is on its way.

A procession of bamboo baskets followed, each a little world of flavours. 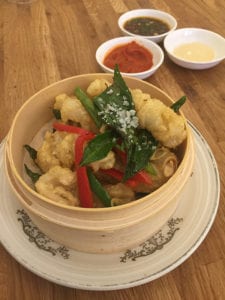 (£5.30) The first bite says it all. These were not the over seasoned frozen squid rings that so often masquerade as this dish. These were tender squid lightly coated in Shaoxing wine batter and garnished with fresh red and green chilli and curry leaves. The salt and pepper seasoning, a gentle mix of Szechuan pepper, lemon grass and smoked sea salt. 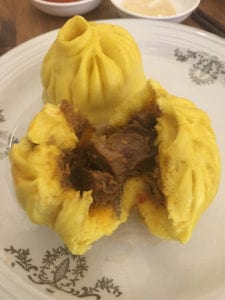 Boa are Chinese steamed buns. I have often found them disappointing sweet dough balls with a dot of filling. Cafe On have updated the traditional recipe by using wholemeal flour and removing the sugar. The result is a tasty savoury bun that has been matched with an equally modern range of fillings. I tried the Lamb Curry Masala Boa (£4.30) made with fresh lamb and Cafe On's own blend of spices. Any comparison with a traditional Boa or an Indian Samosa would be wrong. This is an entirely different and very tasty beast; a confluence of two eastern classics. Bite size pieces of tender lamb in a lightly spiced sauce happily cocooned in golden beehives. 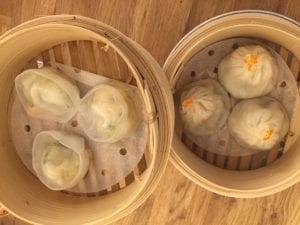 Crystal skin Dim Sum are my favourite. I love the glutinous texture and the seafood fillings that so often lurk inside these semi-transparent dwellings. Cafe On have updated this classic by creating a gluten-free dough made with tapioca flour. The King Scallop and Prawn (£4.30) were a delight. Fresh juicy seafood softly seasoned. The dill aftertaste leaving you ready for more. I could eat these all day

The Chicken Shanghai Xiao Long Bao (£4.30) provided packages of chicken simmered in ginger, lemon thyme, spring onion. Very moist. Very tasty. What was striking in these and all the dishes were the fillings. Dim Sum fillings are often pasty. These were carefully constructed collections of complimentary textures and flavours. As much a treat for the mouth as they were for the palate. 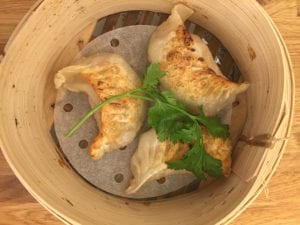 The crispy outer shell give the fried Dim Sum and an extra layer of texture, and the addition of a caramelised flavour. The Fried Beijing Dumplings (£4.20) took full advantage of those additions giving the moist chicken filling all the richness of a Sunday roast. 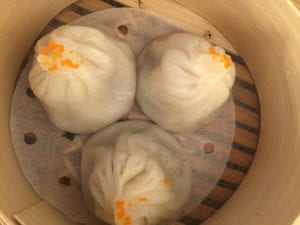 There was no way that I was going to visit a Michelin Star standard Patisserie's cafe and not have a pudding. The problem was the choice! There were rows of temptations to choose from, each more indulgent than the last.

In the end, I went for the  99% Raspberry Eclair (£4.20) - though I reserve the right to go back and try the rest. The taste was clean and light and very raspberry. The raspberry flavour enhanced with hibiscus. A lovely finish to a lovely meal.

When I visited Cafe On had been open for less than a month and was BYOB. However, Loretta did say that when they get a table licence she will ensure Austrian wines are well represented. I couldn't agree more. The delicate flavour of Grüner Veltliner, or pretty well any Reisling from the Wachau region is the perfect match for Dim Sum. In the meantime, they offer a range of fresh squeezed juices. I tried Immunity (£3.80) a blend of orange, ginger, turmeric, pink grapefruit, black pepper and lemon. A lovely refreshing taste that went well with the Dim Sum. They also do a nice selection of teas such as the fresh mint tea  (£2.50) I chose to finish my meal. 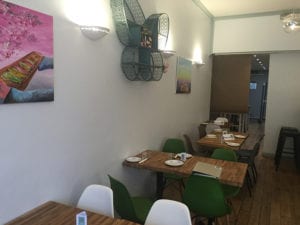 The fun things about Cafe On is the way it has taken cafe favourites like Lamb Curry Masala and Chicken Shanghai and reinvented them to match modern healthier eating habits. MSG has been used as an ingredient in Chinese food for over one hundred years. A drop in the ocean compared to the time that Dim Sum has been made, eaten and enjoyed. So my preference is to think of Modern Dim Sum as Dim Sum before MSG.

If you can't get to Cafe On, don't despair. Loretta has written Modern Dim Sum: Delicious bite-size dumplings, rolls, buns and other small snacks

, a little book that will help you make modern Dim Sum at home.

It is cruel to have to choose from so many lovely cakes.