Radhuni, home of the best curry chef in Scotland!

We were told that Radhuni is a Bengali word meaning 'passionate cook' so where else would you expect to find the winner of the Scottish Curry Awards' Chef of the Year 2018, Ashok Ram, working?

In the business for seven years with a steady trade from locals, Radhuni is now hoping to mark itself as a dining destination to those from further afield with the impressive Chef of the Year accolade, and Edinburgh is only a short drive or bus trip away. Ikea and the Straiton Retail Park are a mere 5 minutes drive away. 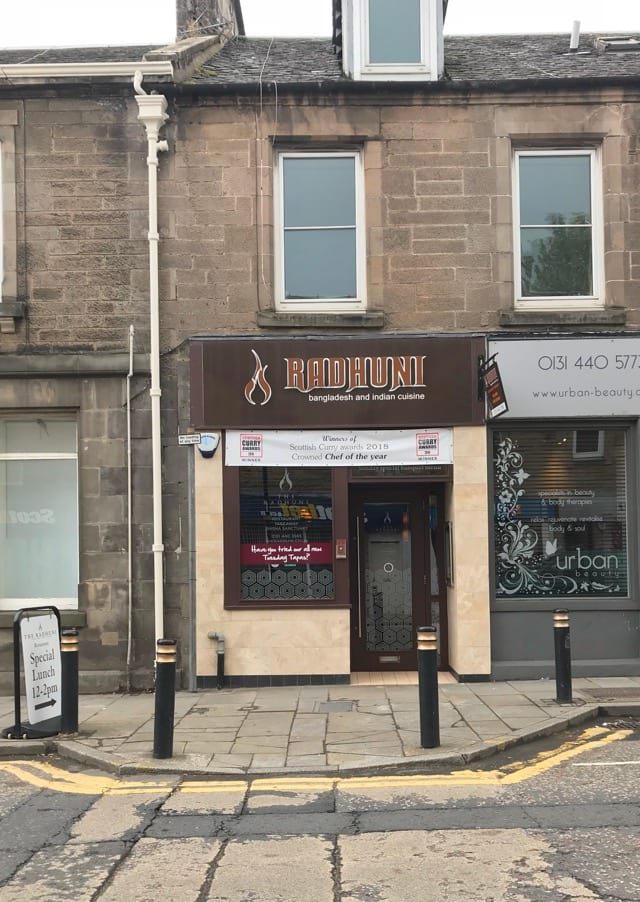 We arrived on the number 37 bus and struggled to find it at first (Google Maps had it in the wrong location but we've submitted an edit for that!), it looks so small but then you walk in, turn a corner and voila, it's like stepping into the tardis! 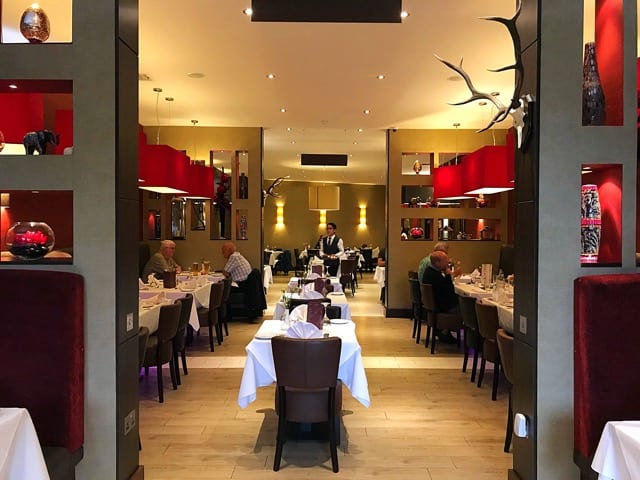 Inside the Radhuni, Loanhead

Not only is it huge inside, they have an outdoor seating area with water feature too, which is pretty rare for Scottish Indian restaurants in my experience. It was a bit wet on our visit so we decided to stay indoors! 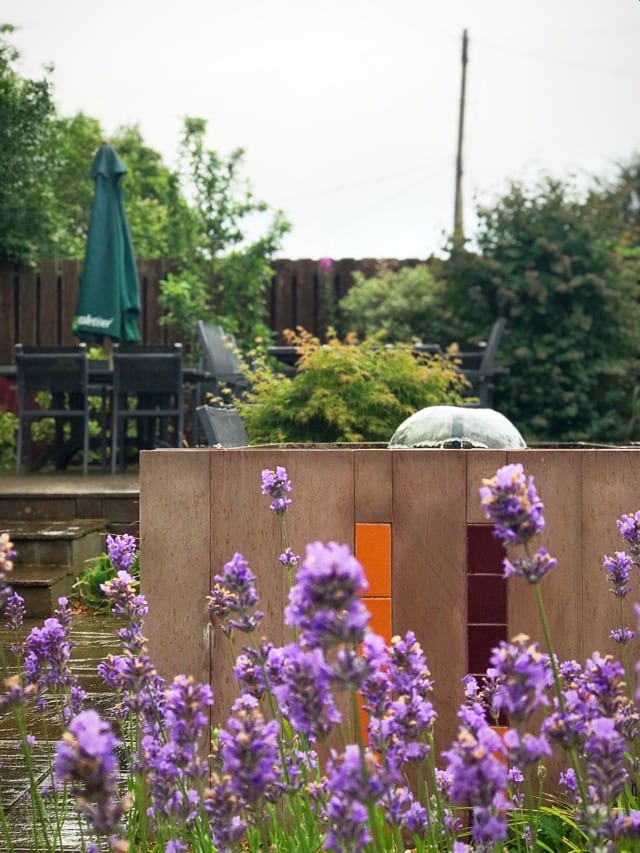 We were immediately welcomed by staff and seated. We noted that the tables are a good distance apart, not crammed together to get extra customers in so we felt at ease. 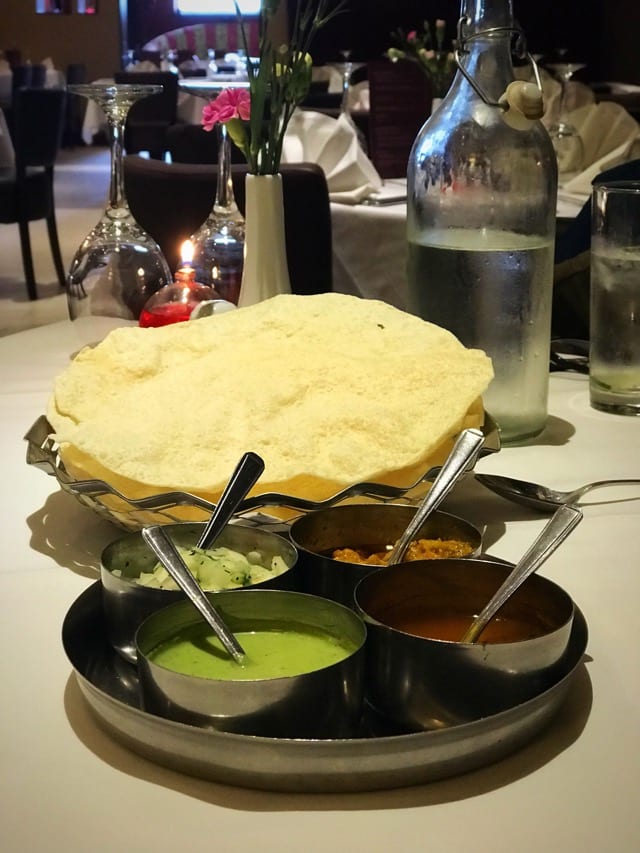 We were off to a good start as while we sat with menus in hand, poppadoms, mango chutney, onion salad, mixed pickle chutney and mint & yogurt sauce were delivered to our table. Tap water was also brought over.
For drinks we both ordered pints of draught Cobra beer, which is always good with a curry (FYI they also sell King Cobra which is a sweeter, stronger Indian-lager-meets-Belgian-ale beer!). They also sell alcohol-free Cobra, which I'd never tried before, so for the purposes of research we took a bottle of that too but it wasn't very nice so if you're the designated driver I would opt for soda water and lime instead (there's parking on the next block south). 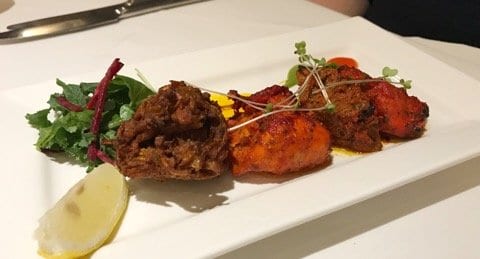 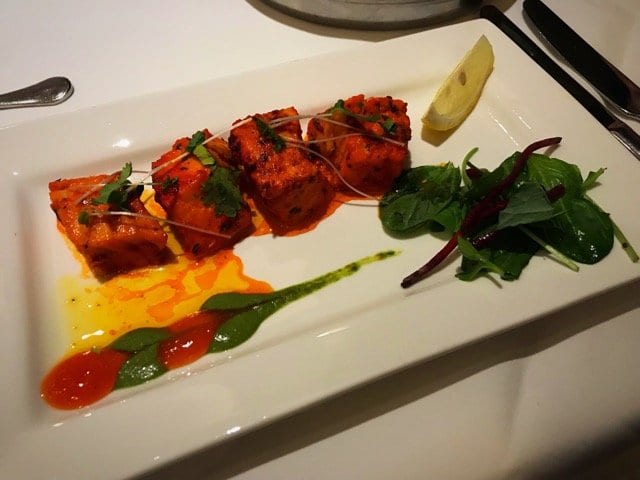 Salmon tikka (£5.95).
Tandoor cooked salmon marinated in spices. We both love curried fish so jumped at the chance to order this, salmon can be great when curried and this was nicely spiced and cooked perfectly.

King Prawn Kashmiri (£14.95).
A blend of cream, coconut and almonds with lychees.  Sweet and creamy. Not sure that we've ever had lychees with a curry before but they went exceedingly well with the king prawn.  A fragrant dish, veering more towards Thai-cooking in our minds, with lots of fruity flavour. 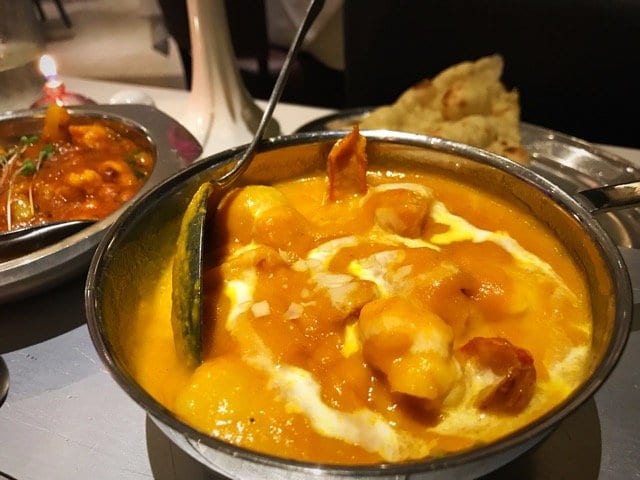 Garlic Fish (£10.25).
I was spoilt for choice for fish dishes. I told staff that I love garlic and coriander and this was what they recommended. Prepared with garlic, lentils, herbs and spices it was a good balance of flavour, moderately spicy with tender chunks of fish. I'm not sure what the fish was but I managed to devour the lot! 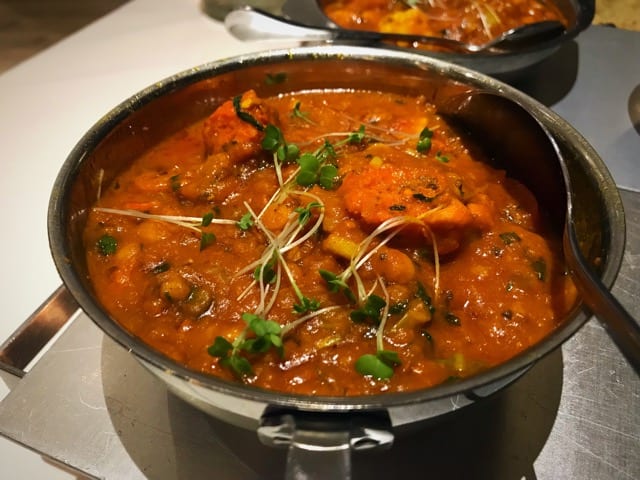 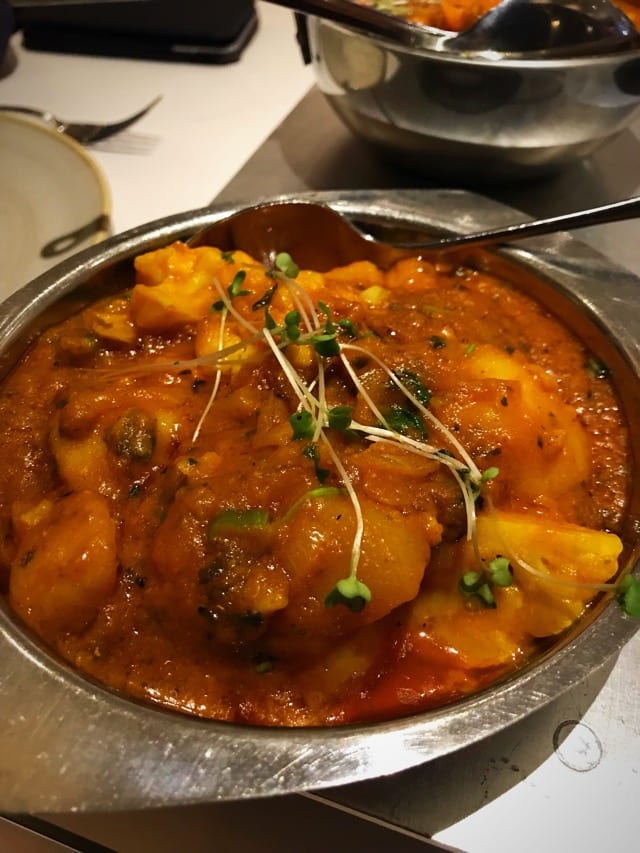 Cauliflower Bhaji - side dish (£4.50).
More cauliflower, this time on its own and more spicy. Mrs Foodie is a bit of a spiced cauliflower addict so when two cauliflower dishes are on a menu...well it would be rude not to order both!  This was noticeably hotter than the Aloo Gobi but not too much to cause concern. 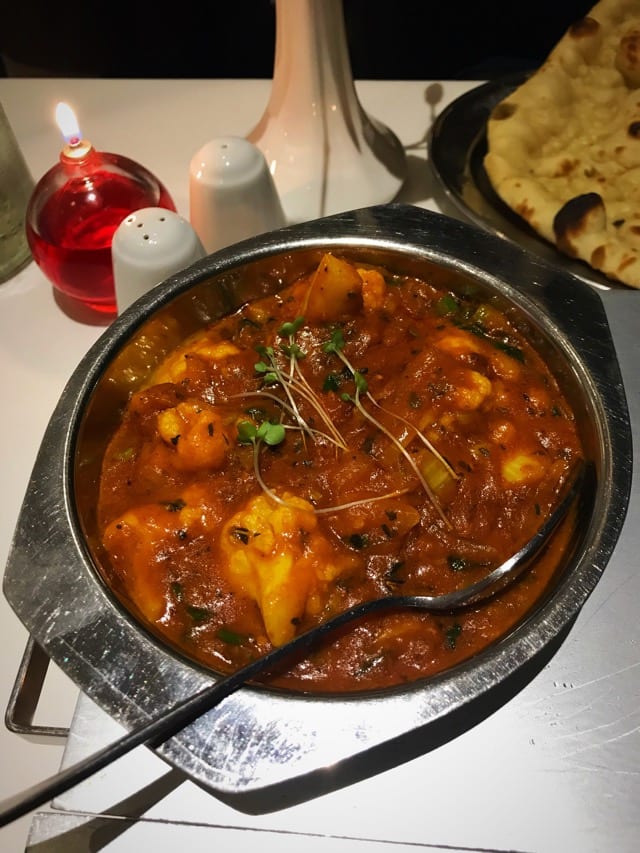 After two courses and two sides we were both pretty full but couldn’t resist a glimpse at the dessert menu, and well, Mrs Foodie is not known to say no to gulab jamin and I'm not the type to pass up on pudding either! So, the Mrs had the Indian classic Gulab Jamin (£3.95), two of them sliced in half and served with ice-cream or cream; she chose ice-cream. Not really a lot to say other than they were exactly the way she loves them, sweet spongy and syrupy! 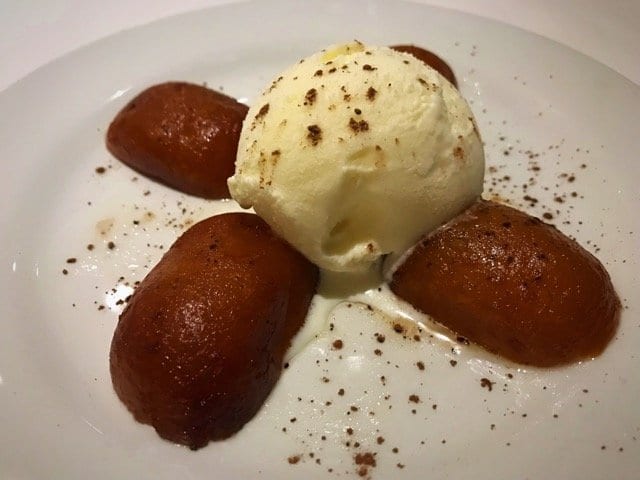 I noticed a dessert with a trio of dark, milk and white chocolate which was a no-brainer for me, but while Stairway to Heaven (£4.50) sounded like my ultimate dessert it didn't quite look the part, though it was three types of chocolate, all very sweet and served with ice-cream so all is not lost! 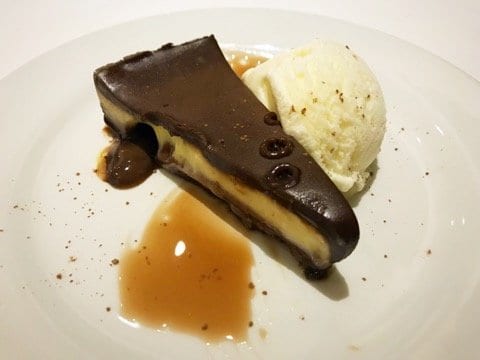 Who doesn't like a good surprise, and we always like to seek out hidden gems, which it shouldn't be now that they have the curry chef of the year in their kitchen! From the unassuming entrance to the welcome to the quality food and outdoor area, we were impressed. The dishes all had a lot of flavour and spices, yes, but it was a balanced where you could pick out flavours of coriander and garlic, for example, rather than being monotonous gloop. It was really filling too, we ate too much in fact so let that be a happy warning! Each course was delivered quickly, our full three course meal was delivered in a mere 90 minutes. The total cost of our meal, including three alcoholic drinks would have been £69 for two, which for the amount of food we consider to be pretty good value. They also do a 2-course lunch for £8.95 from Tuesday - Saturday and if you live nearby they do takeaways too. Staff were wonderfully attentive and toilets were in good shape.

- Dessert was the only disappointing course

Get there on Lothian bus no. 37. It stops very close by. You can get on at Princes Street or North Bridge.

Disclaimer: Fred sez his hoomins got fed and water gratis but look at the kebab and fish he says, go on, it looks great! He wants it in his bowl now, so this must be a truthful review!