What does Black Tot mean?

The name Black Tot comes from Black Tot Day, which was 31st July 1970. This was the last day on which the Royal Navy issued sailors with a daily rum ration, known as the daily tot.

Why a daily ration of rum?

Back in the days before fridges, it was hard to transport water. Casks were used to store liquids and water and wood don’t generally like to be with each other for long. Just think how slimy and smelly that water would be. 🤢

Sailors, like us all, need water to survive so what to do? The original answer was to serve beer. This would last longer for the journey (hmm that reminds me that I should write about the history behind IPA). The sailors received a daily drink ration. In the 17th Century, this was a gallon of beer (about four litres).

All this beer would mean more storage was needed, which is of course a problem when you are carrying everything you need to survive on a boat. So the decision was made to give a daily drink ration of rum. A half-pint, 284ml, of rum was the daily ration.

So why is it called Grog?

The daily ration was formalised into naval regulations by Admiral Edward Vernon in 1740. He had a bit of a concern about these drunken sailors so ordered the rum to be diluted. This diluted drink was called grog, after the coat that Admiral Vernon wore which was made of grogram cloth. He was nicknamed Old Grogram or Old Grog.

Discipline problems brought the conversation of the daily tot up regularly and in 1824 the size of the tot was halved to one-quarter of an imperial pint (142 ml). In 1850, the Admiralty's Grog Committee, halved the ration to one-eighth of an imperial pint (71 ml) per day, eliminating the evening serving of the ration.

The end of the rum ration

On 17 December 1969, the Admiralty Board issued a written answer to a question from the MP for Woolwich East, Christopher Mayhew, saying "The Admiralty Board concludes that the rum issue is no longer compatible with the high standards of efficiency required now that the individual's tasks in ships are concerned with complex, and often delicate, machinery and systems on the correct functioning of which people's lives may depend".

A debate was held in the House of Commons on 28th January 1970, with the final decision being that the rum ration was no longer appropriate. Water can be transported safely, and I’m sure knowing that possible drunk sailors are handling nuclear missiles was a concern as well! 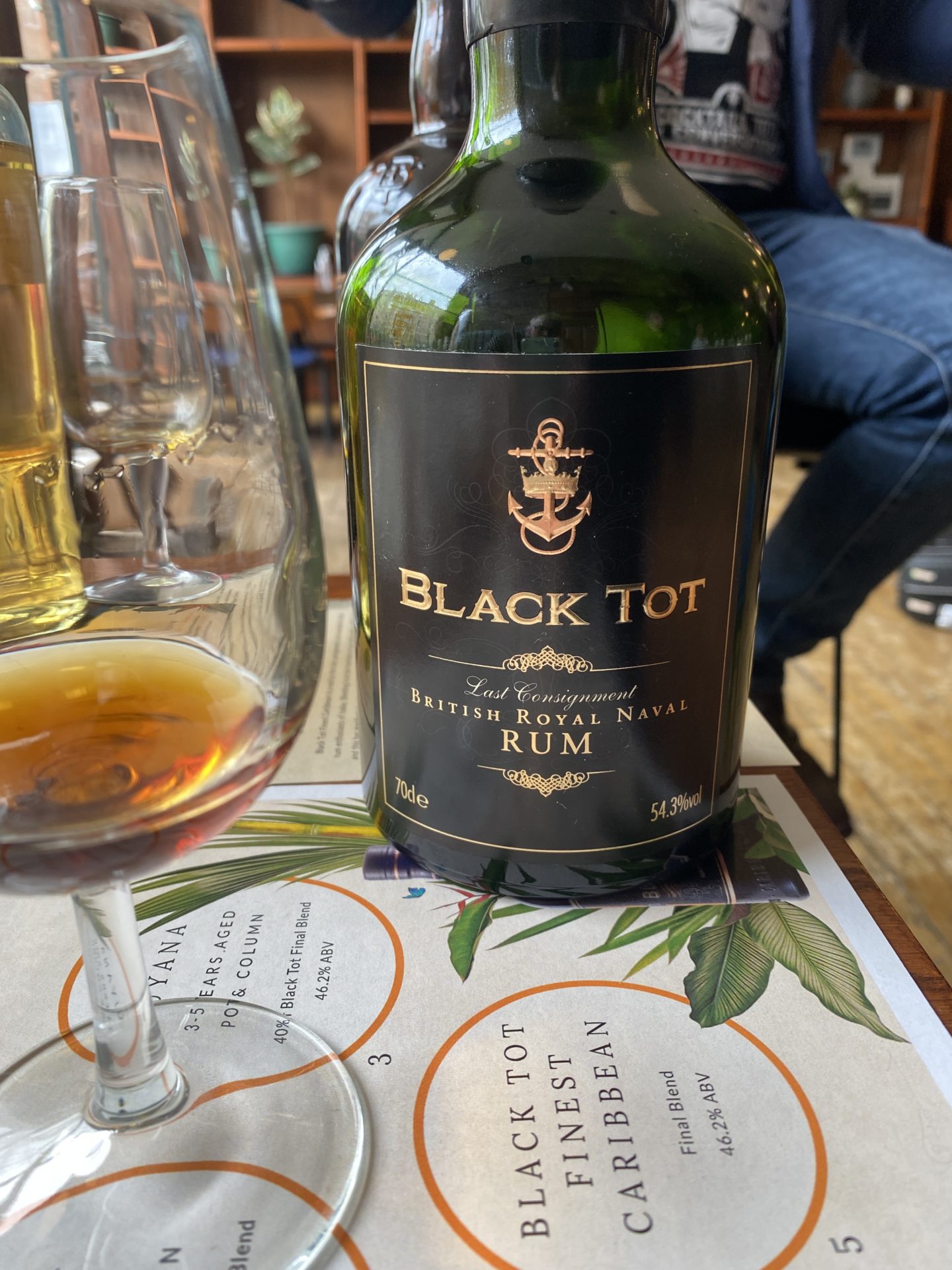 You can almost taste the history of rum and the colonies here. Tobacco, chocolate, coffee and oak as well as fruit.

3000 bottles of this were released and it was a pleasure to drink but it retails at £750. 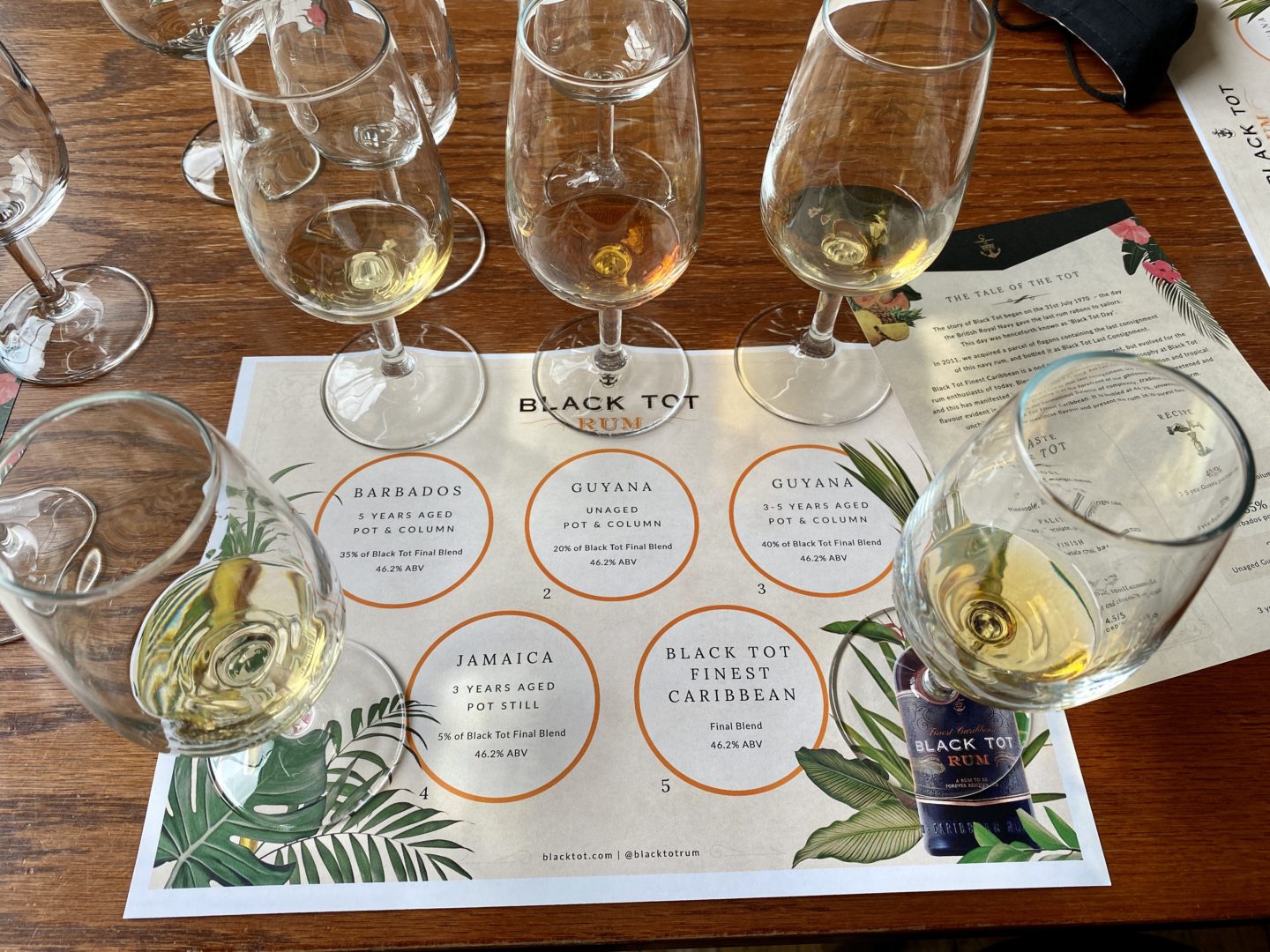 In this tasting, we got to taste the individual rums to see how it all joins together to make Black Tot Finest Caribbean.

First up was rum from the Foursquare distillery in Barbados. 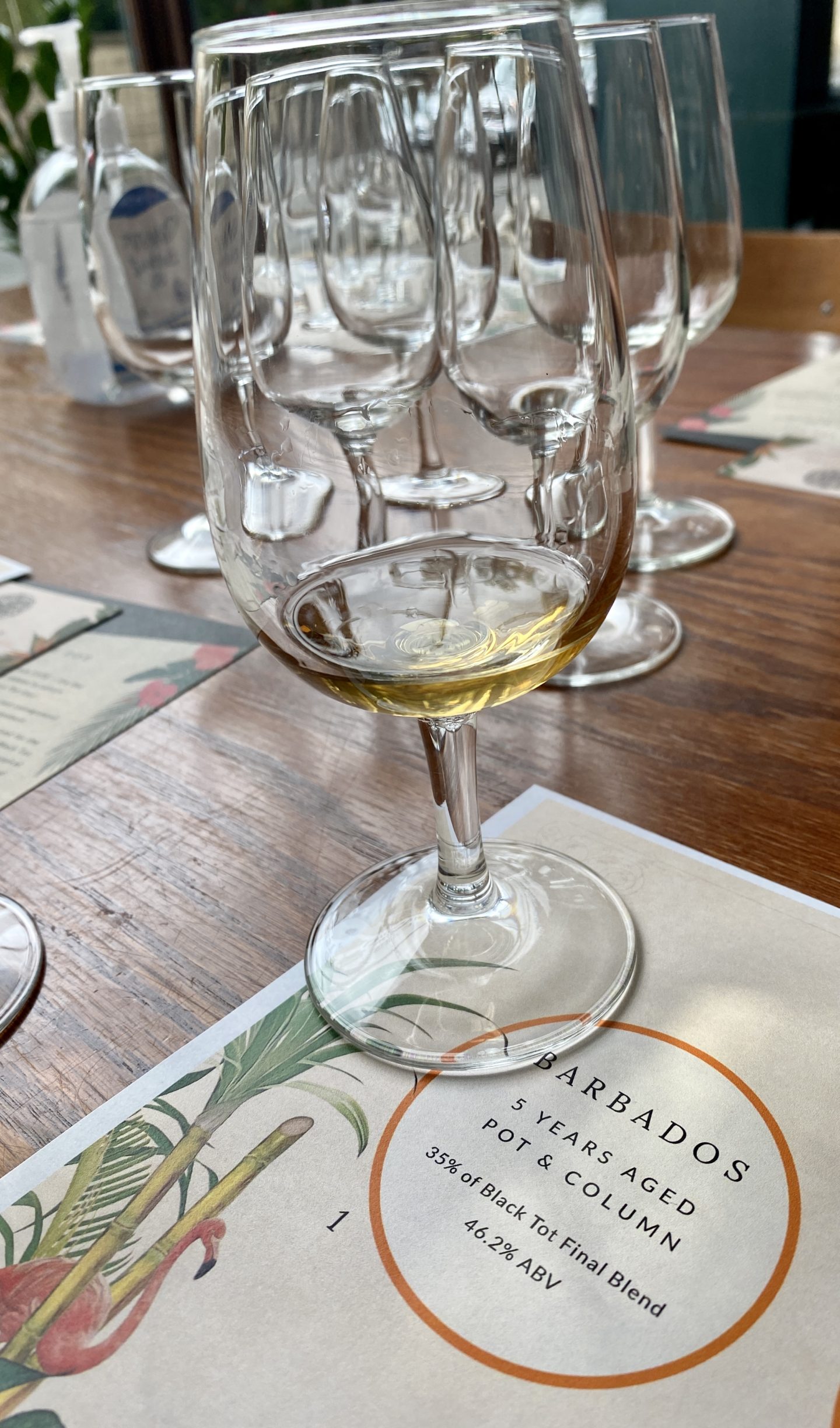 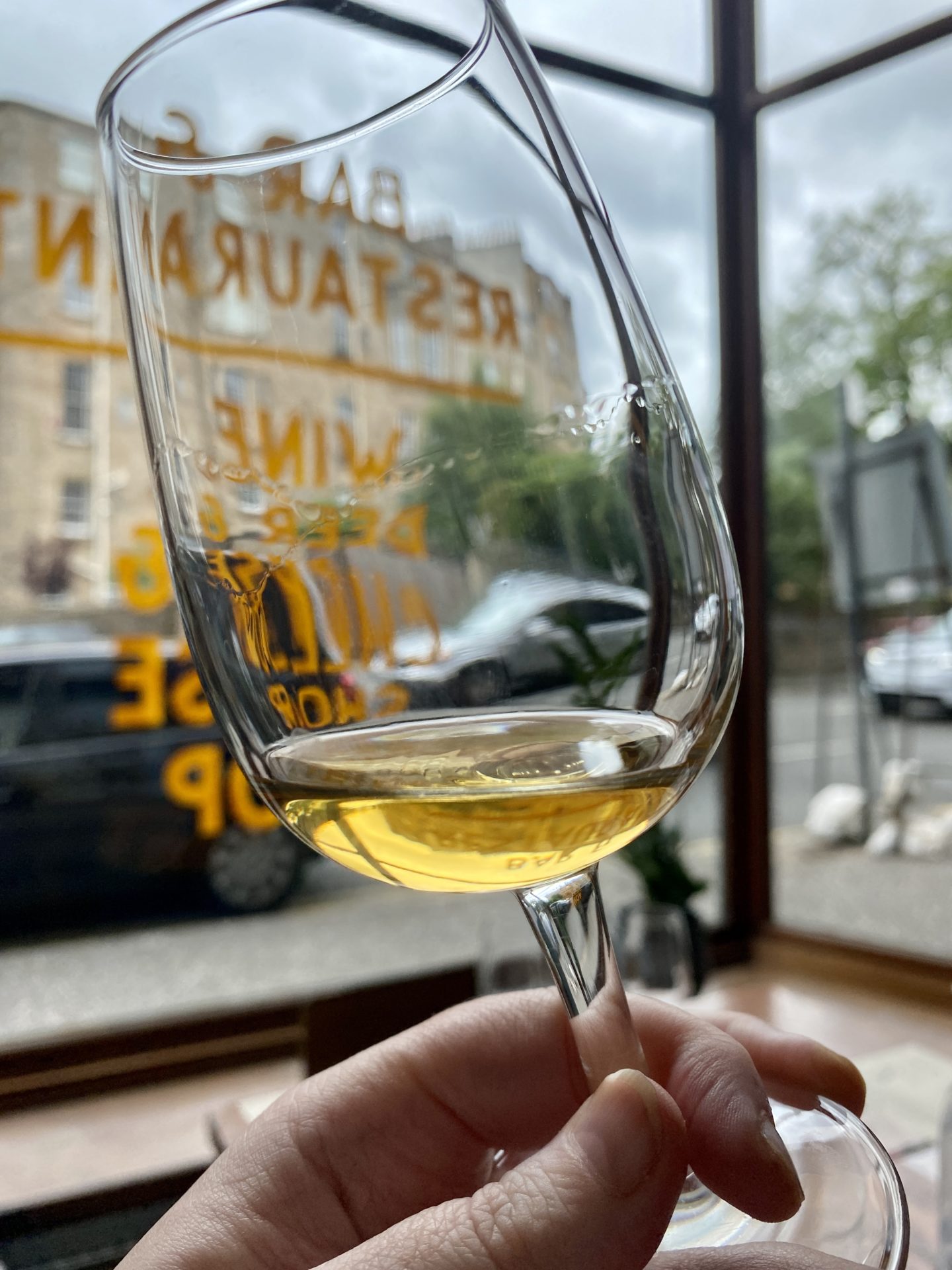 Next up to try were two different runs from Guyana. Surprisingly the darker of the two is unaged, which isn’t what I was expecting. The colour comes from caramel sugar.

Both were easy to drink and tasted even better when combined so you got all the coffee/fruity and toffee notes. 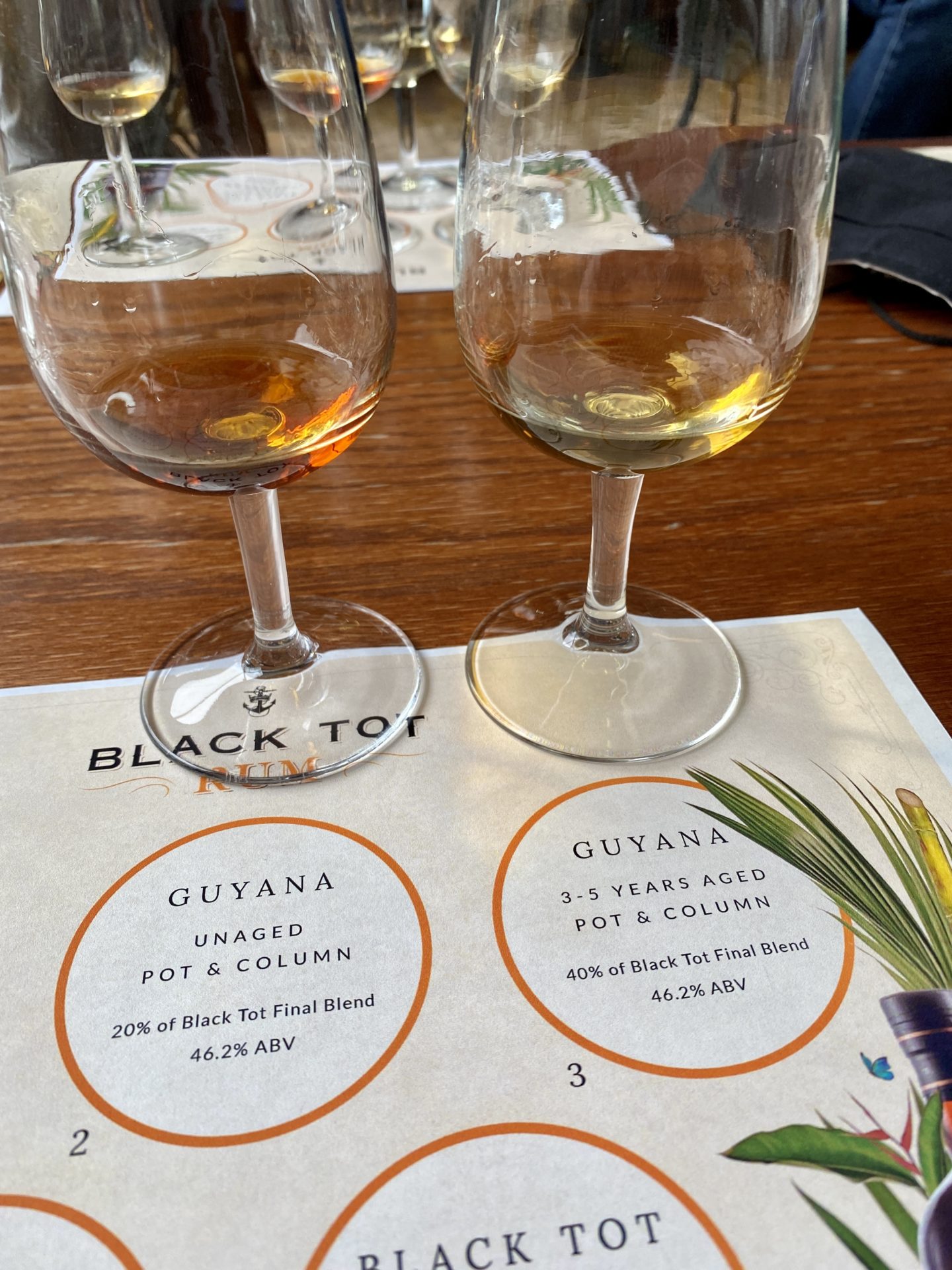 The final component to try, rum from Jamaica. This rum is from Worthy Park Estate. 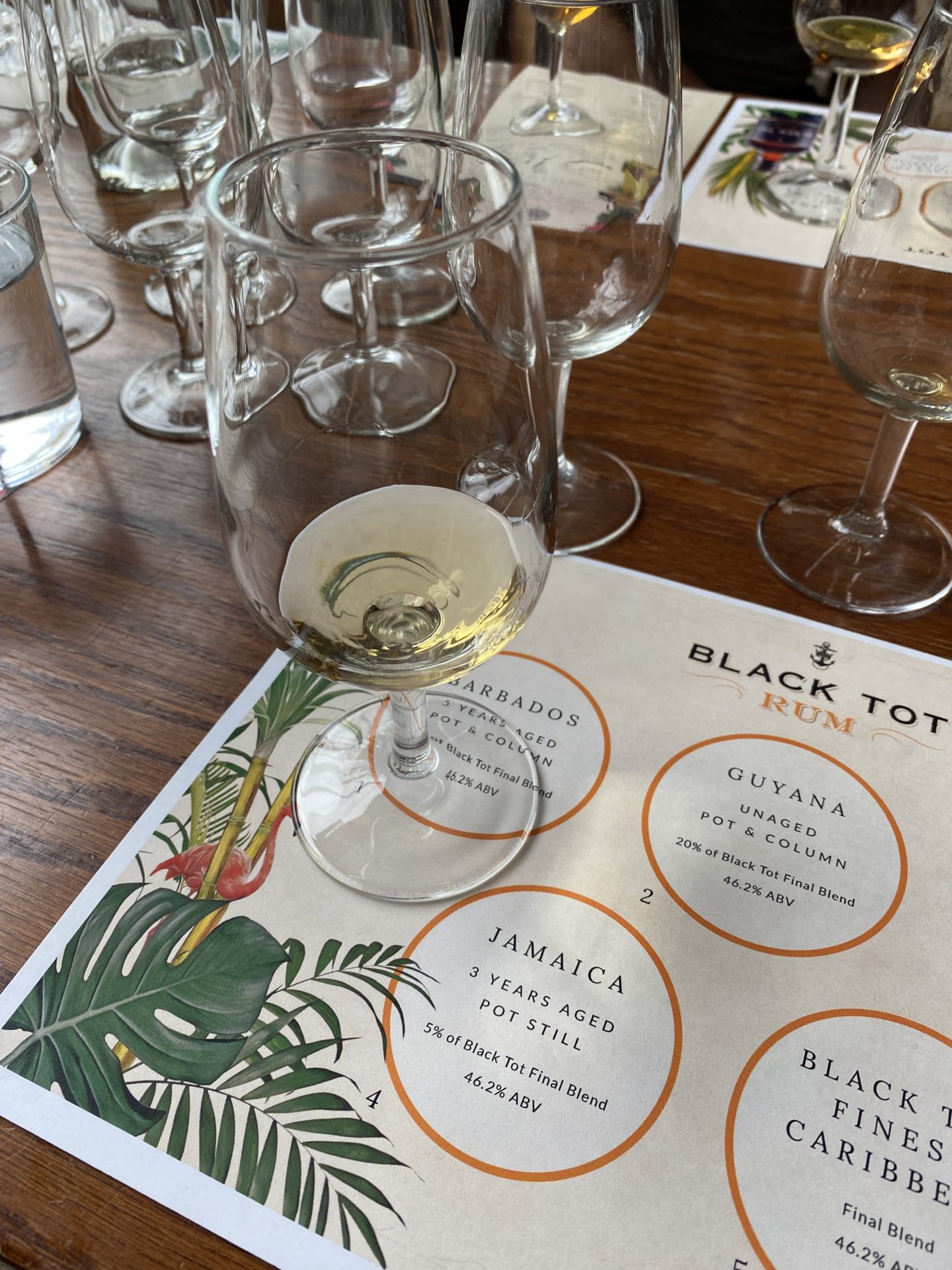 Banana skin nose with a sweet, funky and intense taste. My least favourite but I can see why it is in the blend. That funk is needed. 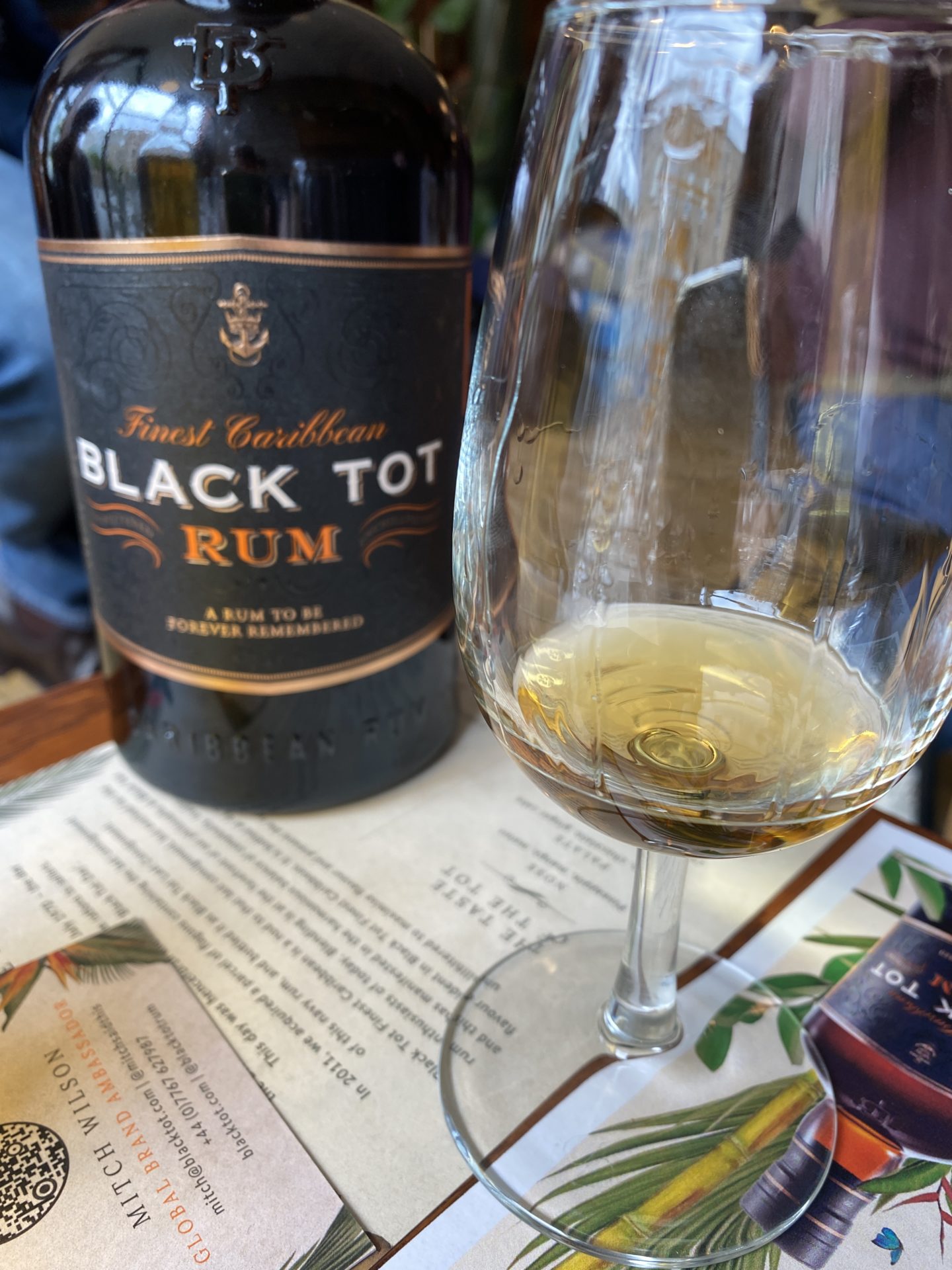 After those, we got to try the Black Tot Finest Caribbean, a multi-layered drink of the above delicious rums from Barbados, Guyana and Jamaica. With a beautifully sweet toffee and fruity nose with creamy notes finishing into coffee and chocolate.

Such a smooth rum to drink neat, and I’m thinking this would also make some awesome cocktails.

Buy Black Tot Rum online at their shop or through retailers such as Master of Malt.

Many thanks to Black Tot Rum for taking me through this rum journey.