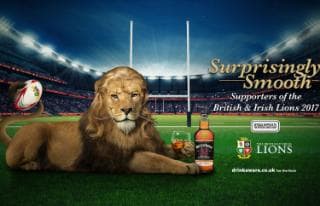 Are you Lion or Lyin?

Normally rival players, the Lions squad put their differences aside for the duration of the tour every four years. Whyte & Mackay are challenging fans to do the same by passing a Lion Detector test in the world’s smallest travelling rugby stadium that will roar to life this weekend.

A specially converted trailer, fans will step inside The Lion Detector to find themselves in a mini rugby stadium with a difference. Instead of watching a match, they’ll be challenged by a special referee to pull on an unusual scrumcap fixed to a lie detector test to prove whether they’re a Lion or Lyin’.

The Lion Detector will visit partner bars, The Old Schoolhouse in Glasgow and The Merlin Roadhouse in Edinburgh over the next three weekends and fans will also have a chance to win an exclusive official signed team jersey and receive a complimentary dram of Whyte & Mackay.

The Lion Detector will be visiting: