Another fresh and bright morning in Berlin.  On this trip we stayed in Prenzlauerberg and had breakfast at Cafe Melon beside a tram stop to Alexanderplatz.

A busy cafe, popular with locals and holidaymakers alike. We picked scrambled eggs and their Berlin breakfast. 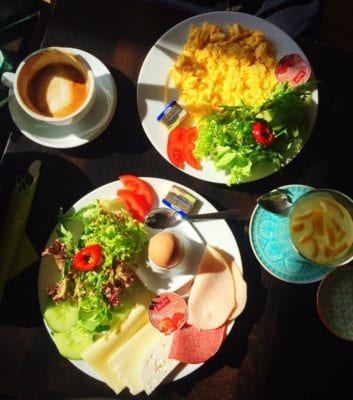 The Berlin breakfast consisted of cheese, ham, salad and boiled egg with rolls and some jam. I had a ginger and lemon tea as well - very healthy for me!

As usual we lingered too long at food and had to rush to Gesundbrunnen Ubahn to reach Berliner Unterwelten to get there in time to buy tickets for their flak tower tour. This is an organisation which runs tours on hidden parts of Berlin relating to WWII or the Cold War.  We've been meaning to go for years but never had the time before.   Turn up 15 mins before the advertised start time to buy your ticket.  They only accept cash, so no cards. 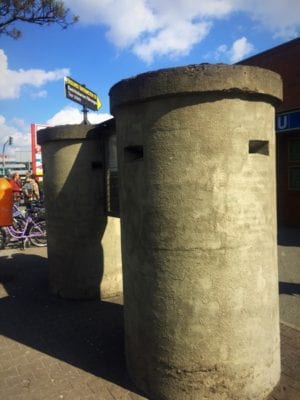 You'll notice the standing single bunkers outside of Gesundbrunnen Ubahn station. These are WWII remains.

The tour begins with a hike up to the top of what remains of Humboldthain flak tower for a stunning view of the city. 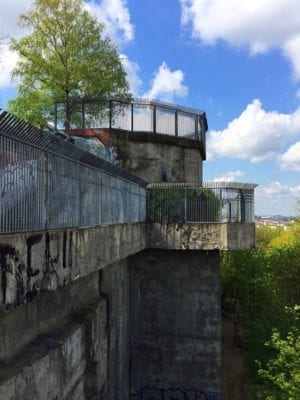 The flak tower was blown up by the French after WWII. Unfortunately for the French, and fortunately for us (!), only the southern half of the tower fell (they explain why on the tour).  The fallen half is what you climb up as Berlin doesn't have any natural hills.  Any hills you see are man-made and generally comprise rubble from WWII!

Unfortunately you aren't allowed photography on the tour. If you are into peeking into hidden areas or are a history nerd then this tour is for you. Getting inside the tower and hearing all about the weaponry, stories and seeing the size of it from inside (even though only 15% of the original structure remains!) is well worth the €11 fee. 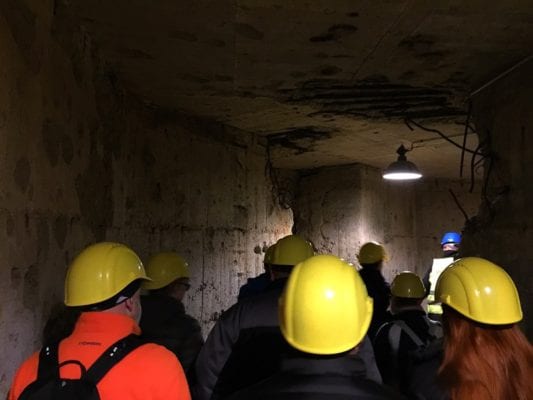 Entering the flak tower (photos are allowed here only)

After this we wandered along to Mauerpark and used one of the retro photoautomats you find dotted around the city. For €2 you can re-live the days before digital film with a strip of black and white pictures. 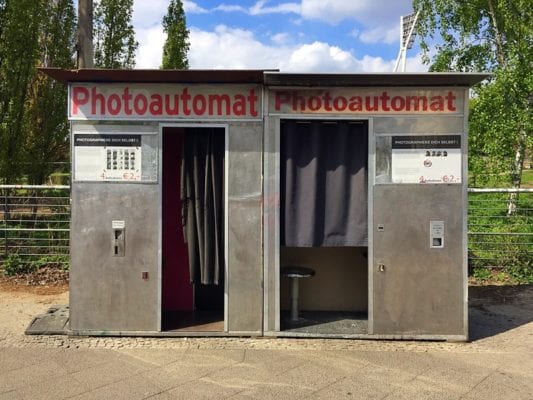 Suitably laughing at how silly we looked, we continued on our wander. Along to VEB orange for some DDR (East Germany) chic. This is an amazing shop filled with all sorts from vintage clothes to a full kitchen. 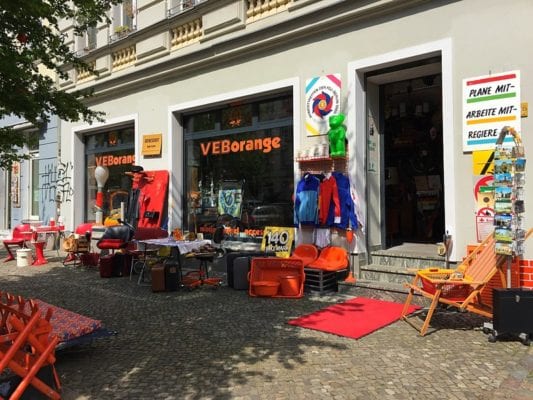 Time for a rest for the legs so a stop at Kauf Dich Glücklich Café across the road for coffee and a waffle topped with fig cream. Mmm!

Refreshed, we passed by a bit of the Berlin Wall at Bernauer Strasse - it's worth taking the time to follow the route of the wall here as information/photo boards are at regular intervals. 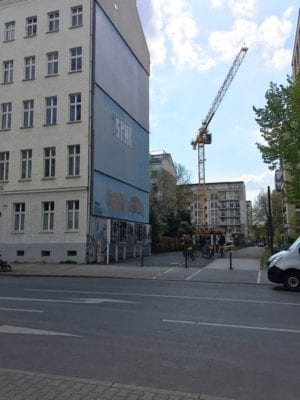 There is still a gap where the wall and death strip ran.

Around Berlin you will also see these metal bricks known as "Stolperstein", or stumbling rocks.  They are metal plates inscribed with the name and life dates of victims of Nazi extermination or persecution. They are located either where the person lived or worked. 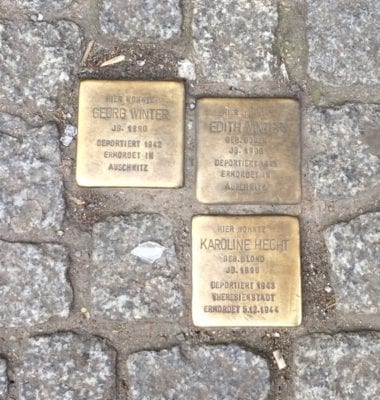 We had another break, this time at Green Tea Café Mamecha for a matcha latte and a rest before our next Berlin Unterwelten tour, this time in the south of the city. 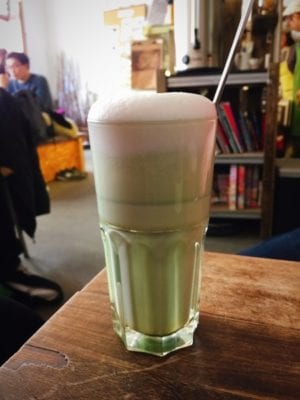 This tour was all about the Fichtebunker which was a gasometer converted to a bunker in WWII and is now, on the top floor anyway, luxury housing! 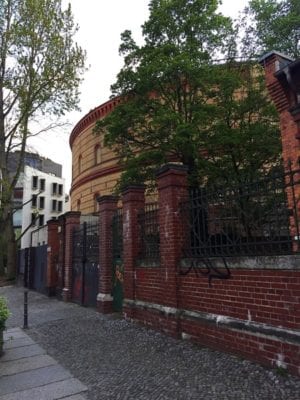 Another interesting tour worth the €11.

Did you know Berlin has nearly 44,000 gas street lights?  One of the geeky pieces of info gleaned from this tour and outside the old gas store you can see some of those lamps in action (there is also a gas lamp museum street in Berlin! - that's one for our next holiday). 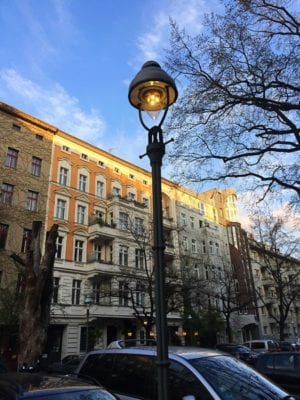 After all this history, it was time for food and beer at Brauhaus Südstern It's asparagus season and Berliners love both the green and white varieties, but especially white asparagus so it's on sale everywhere in April on special "spargel" menus. So we ordered a spargel flammkuchen and lots of beer! 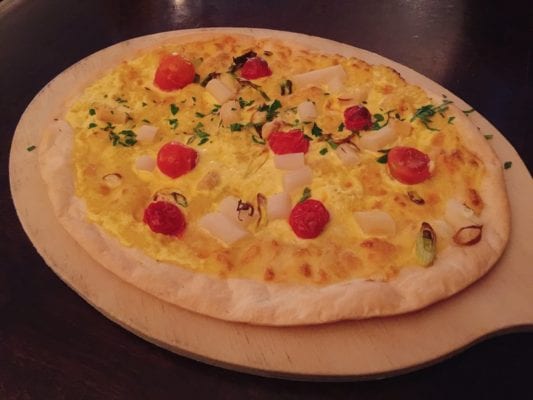 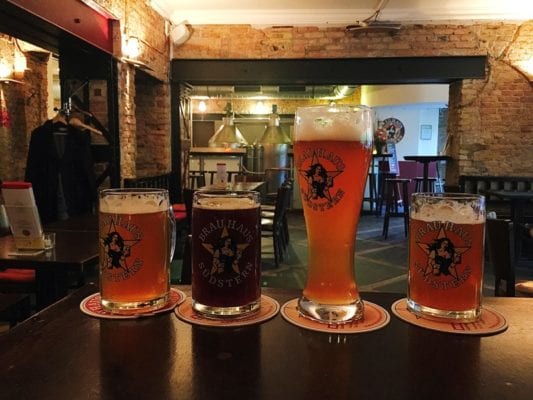