Our last full day of this quick trip to Berlin. Usually, it's food first before we get hangry, however on our doorstep was an unusual fountain called the Märchenbrunnen, this fountain of fairy tales is in the volkspark Friedrichshain in east Berlin.

Completed in 1913, it was partially destroyed by WWII and rebuilt afterwards with a further refurbishment in 2005. The fountains cover an area of 90 by 172 metres (295 by 564 ft) which is surrounded by fairytale characters from the Brothers Grimm, such as Puss in Boots, Cinderella, Little Red Riding Hood and Sleeping Beauty. 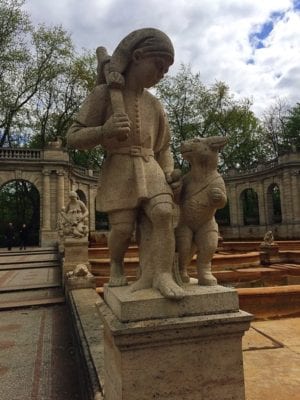 Despite being chilly, the park had a good amount of people wandering about. There is a restaurant with beer garden, a peace bell from Japan, a Spanish Civil War memorial, remains of a flak tower and lots of pretty walks for fresh air and relaxation. 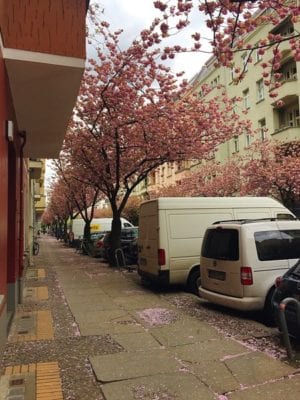 It's spargel (asparagus) season just now which is extremely popular.  White asparagus (Weiss spargel) is sought after and rightly so, it's much tastier than the nuttier green asparagus.  Berliners love it so much there are dedicated stalls selling only white asparagus and most of the restaurants we went into had special spargel menus. By this point we were really hungry! 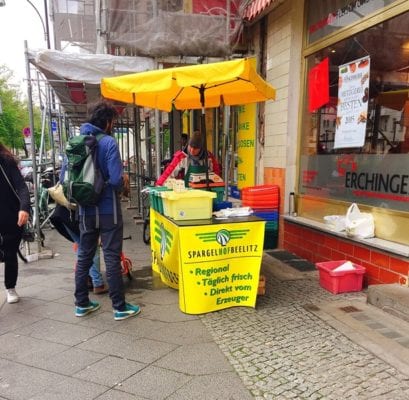 So off we went to our brunch destination of Café Anna Blume, open daily from 8am until 10pm, Cafe Anna Blume is one of the spots to be seen having brunch in Berlin. We grabbed a table outside and dived into the menu ordering a flower meadow tea whilst Mr Foodie picked a hot buckthorn juice with honey. All very healthy -  not like us at all! 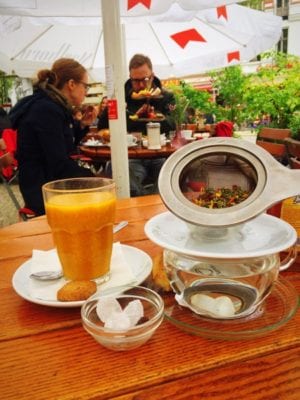 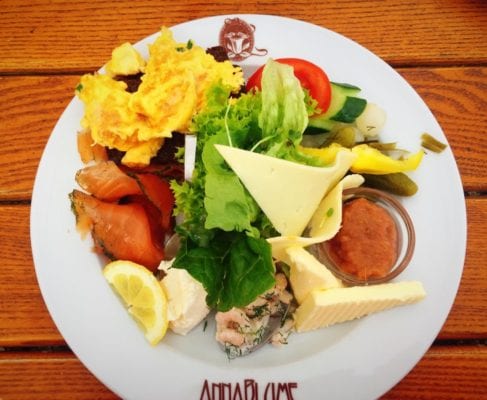 Whilst Mr Foodie picked the less adventurous but equally delicious scrambled egg with spinach and onion. 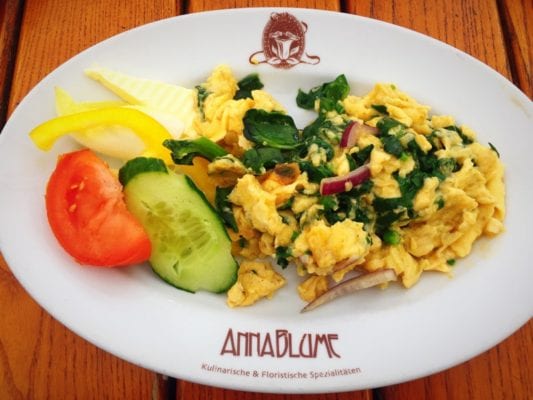 This was a leisurely brunch, and we were tempted to order a slice of their amazing looking (huge) cakes, however we'd marked a nearby patisserie onto our map... 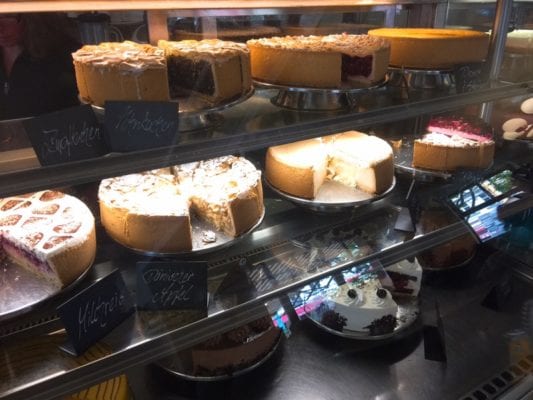 Mr Foodie directed us towards Werkstatt der Süße. This was chocolate heaven, with a selection of exquisite looking desserts, where you could also watch the cakes being made then relax over a coffee (or hot chocolate) with one of their creations. So of course we just had to! 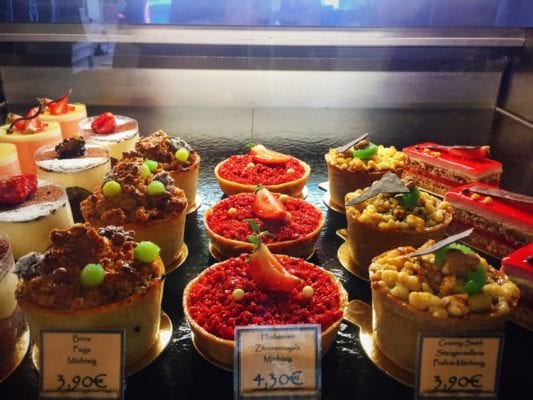 The Kulturbrauerei was next on our to-do. Shops, bar, cinema and a DDR (East Germany) museum. Unlike the main DDR museum just off Alexander Platz, this one is free but just as good, if not better?! 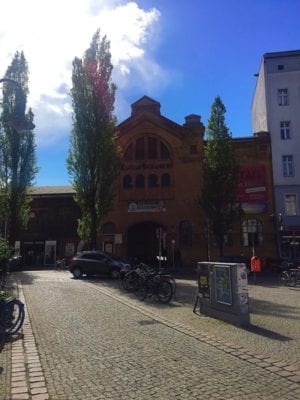 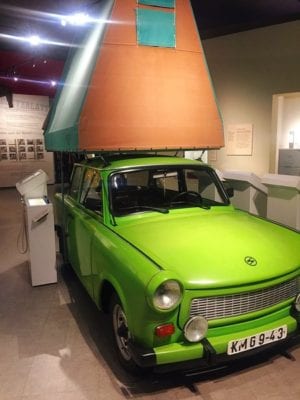 There's plenty to read and watch with original items as well as reconstructed housing and more. Exhibits are in German and English.

More wandering about to experience the atmosphere of Berlin. Where else will you find a kids' shop and sex shop next door to one another?! 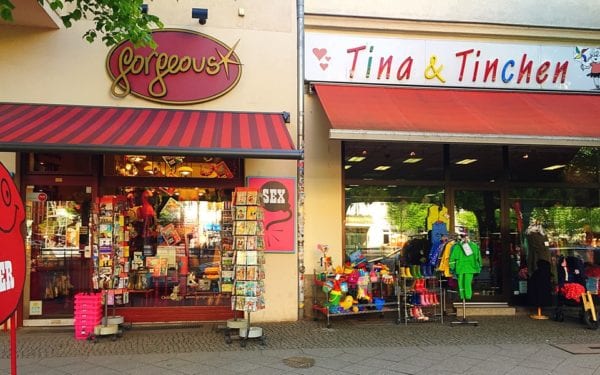 On Schonhauser Allee is Alain Snack a remnant of  East Berlin. 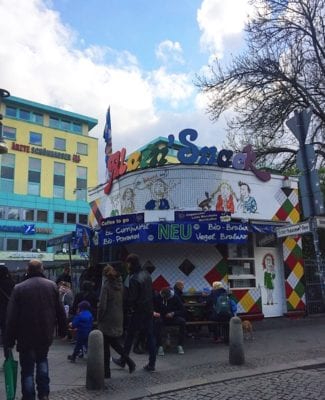 This colourful snack stop is one of the few places you can get a Ketwurst.  This was the East German answer to a hot dog.  A roll with a ketchup covered sausage inserted. 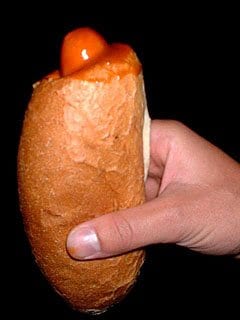 Or you can stick to the traditional currywurst like us. 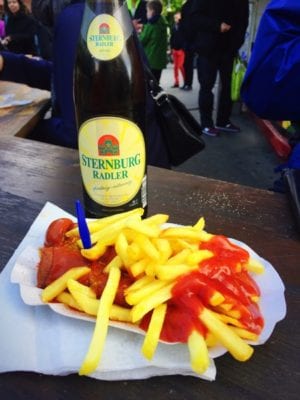 Time to visit some of the places we love about Berlin, the bars.  Neighbourhood bars are what makes the city tick.  You feel like you are sitting inside a friend's living room with good beer and (mostly) good music (mixing Kraftwerk's trans-Europe express into Pulp's Common People is not a good idea!). 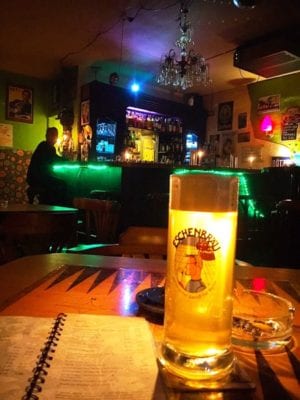 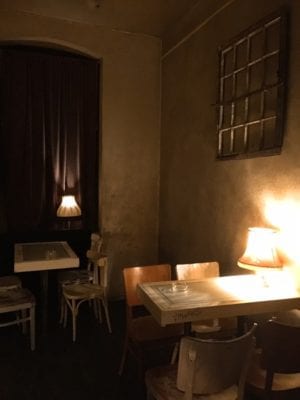 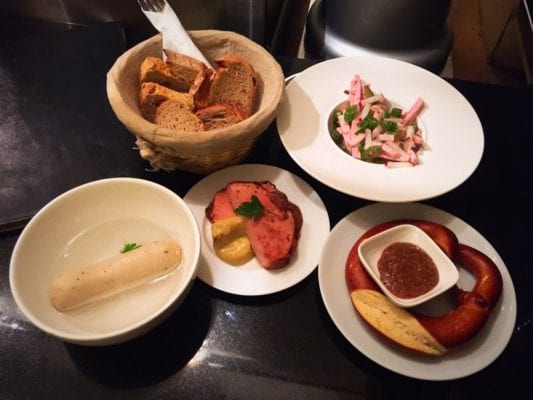 Then it was time for bed and a lunchtime flight back home the following day. 🙁