Unusual but photogenic statues of Bratislava

One of the more popular pastimes when visiting Bratislava is to seek out the unusual and sometimes creepy statues.  Here are some that we have seen whilst visiting the Slovakian capital city.  Keep looking about, as there are statues all over central Bratislava.

Čumil is "the watcher".  He is an extremely popular guy and one of the easiest ones to find, though he is at ground level, so there is a road sign to make sure you don't miss him! At the junction of Laurinská and Panská Streets there is usually a gaggle of tourists looking at Čumil, and locals giving him a stroke of his head.  The local story goes that if you touch his head then your wish will come true.  As long as you don't tell anyone what the wish is!

But is he being a bit of a layabout or is he looking up the skirts of ladies?! 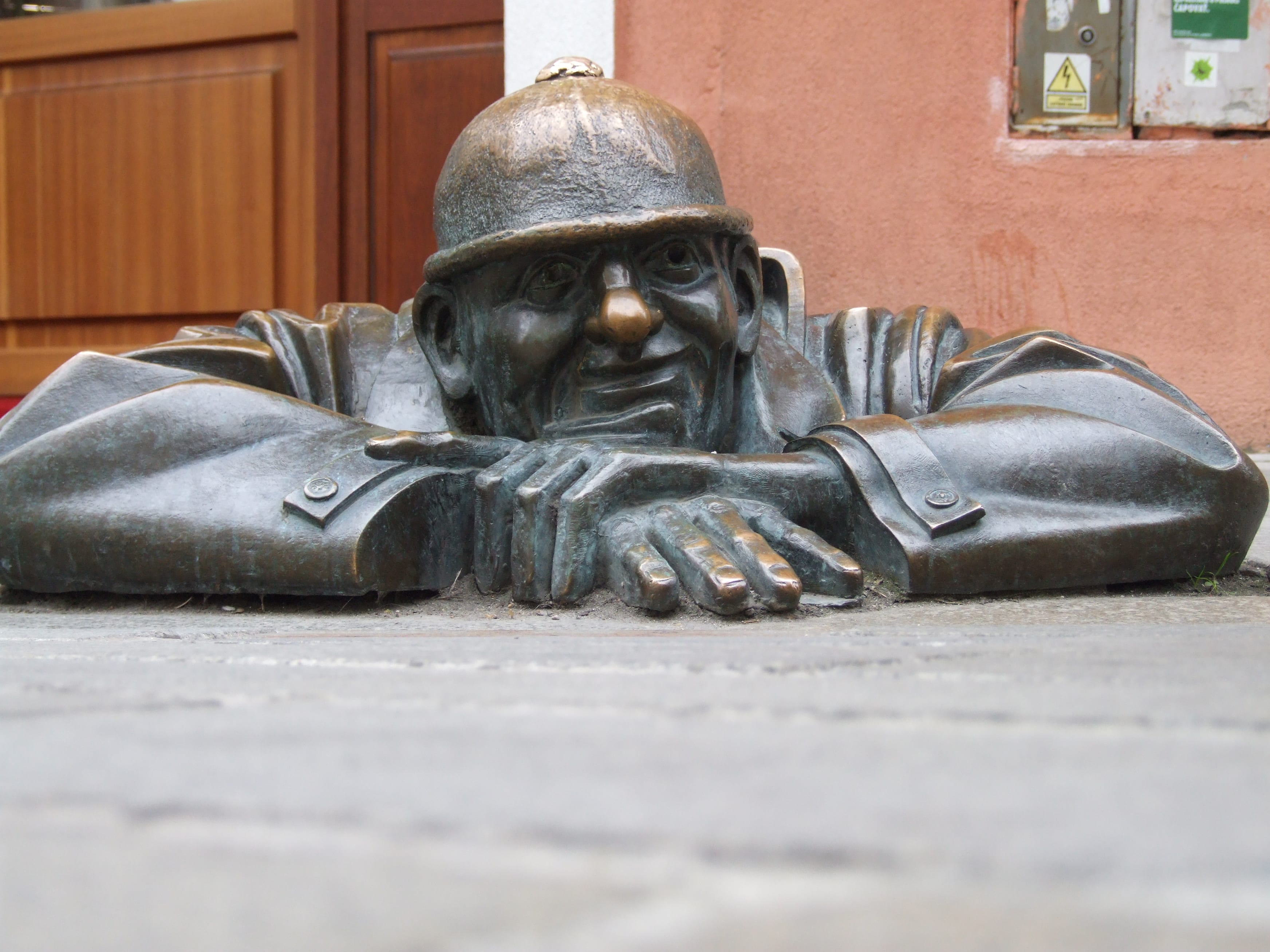 ** Cumil might not be there when you visit as he has been messed with! https://spectator.sme.sk/c/20970812/the-legendary-cumil-is-gone.html

A modernist statue next on Námestie Ľudovíta Štúra which is a monument to Ľudovít Velislav Štúr.  This chap was the leader of the Slovak national revival in the 19th century. 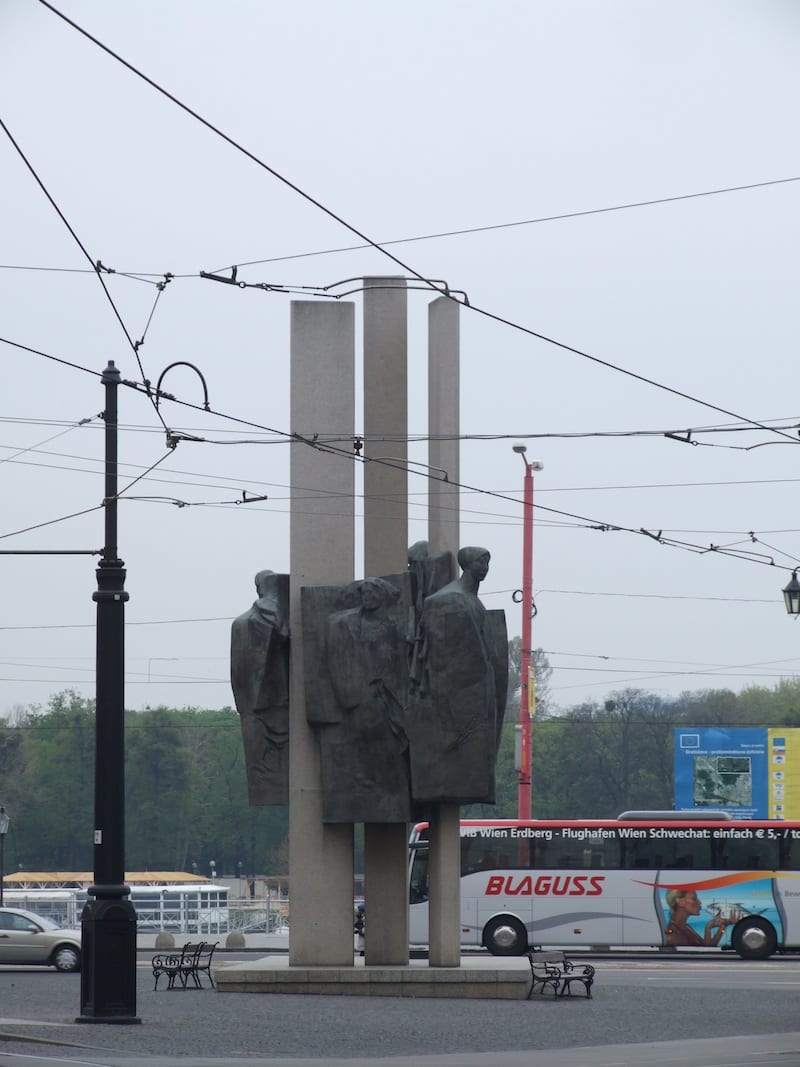 Walk to Panská Street and look for the optician shop called Fokus, it is at number 29.  Standing outside, look up and you will see a small naked man in a hole. Seemingly this was set there to ridicule a former owner of the building who used to spy on the passers-by through a small window.

This old man is the only statue of a real existing person. His original name was Ignac Lamar and he lived in Pressburg (former name of Bratislava) at the turn of the 19th and 20th century. 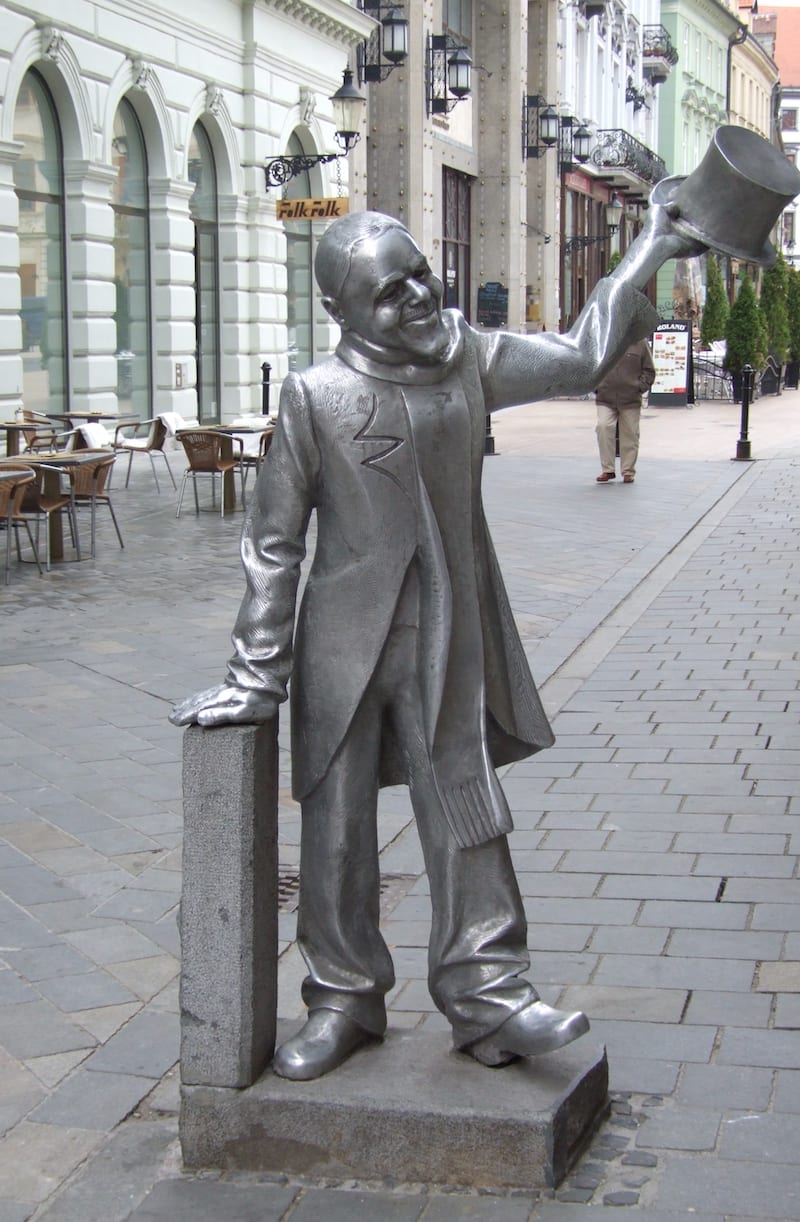 The story says that he was in love with a woman who sadly did not love him back. This disappointed him so much that he went a little crazy and would often be seen giving flowers to random women he met in the streets.  You can find him on Sedlárska Street.

A linden flower on Námestie Slobody represents the friendship with the communist, created into a metallic sculpture entitled ’Fountain of Union’. 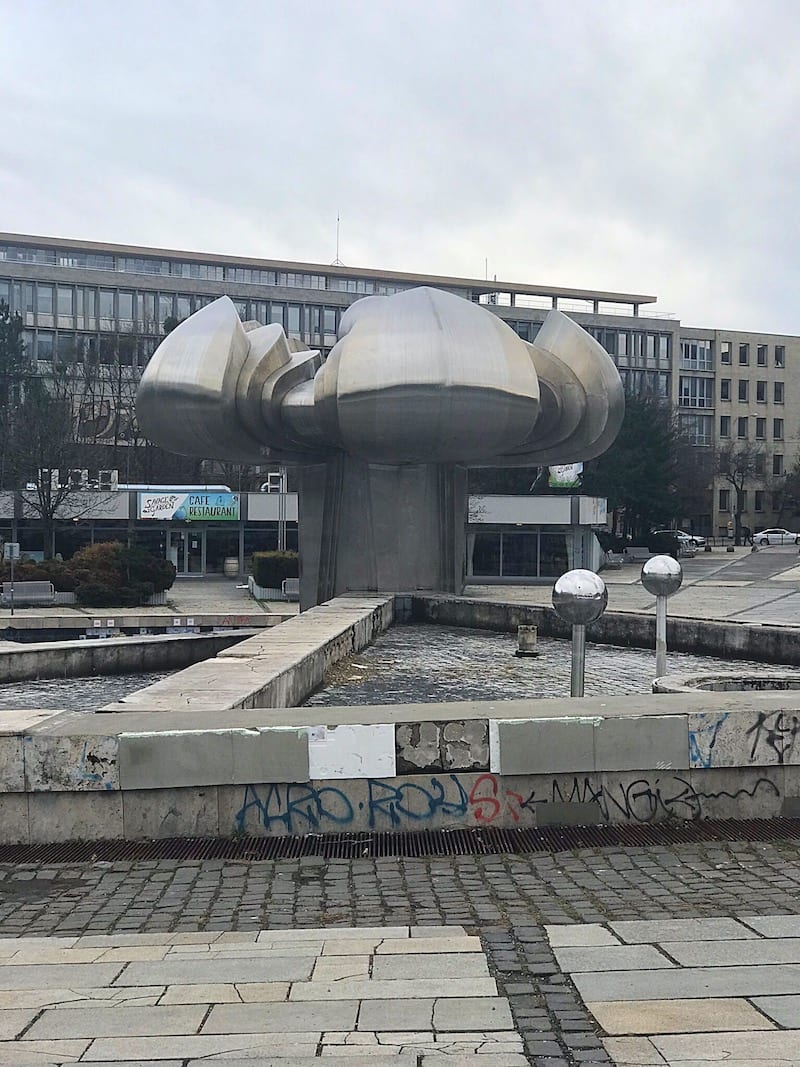 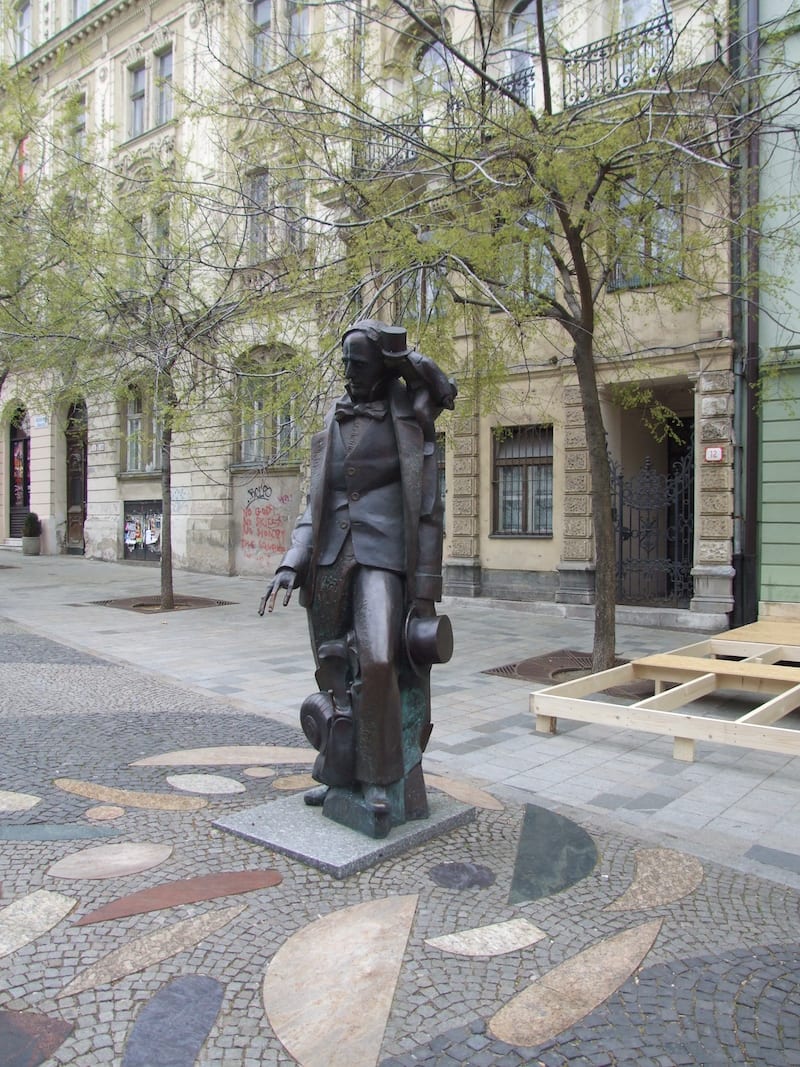 Napoleon and his army were in Bratislava in 1805 and left behind this soldier.  This soldier is supposed to have been going through Bratislava when he fell in love with a local girl.  He stayed in the city and became a producer of sparkling wine. 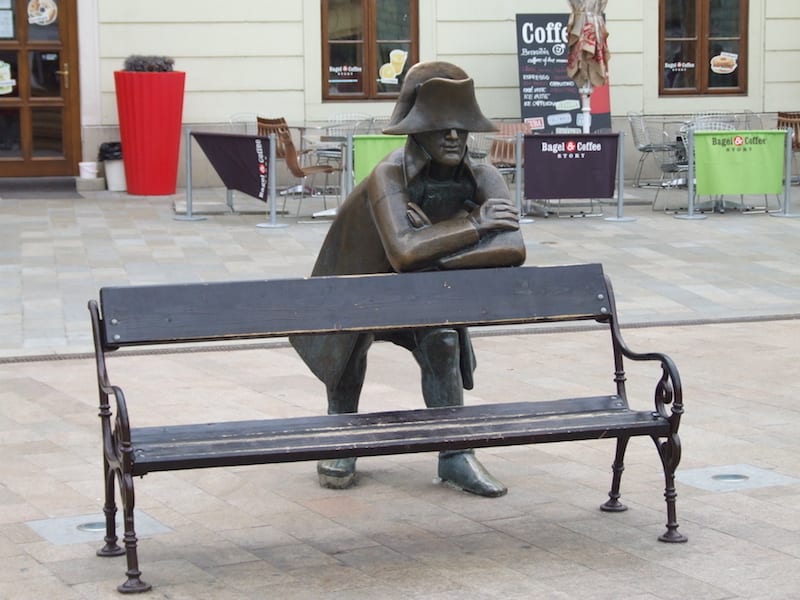 Just opposite the bench, you will find his Napoleonic friend standing to attention guarding a souvenir shop. 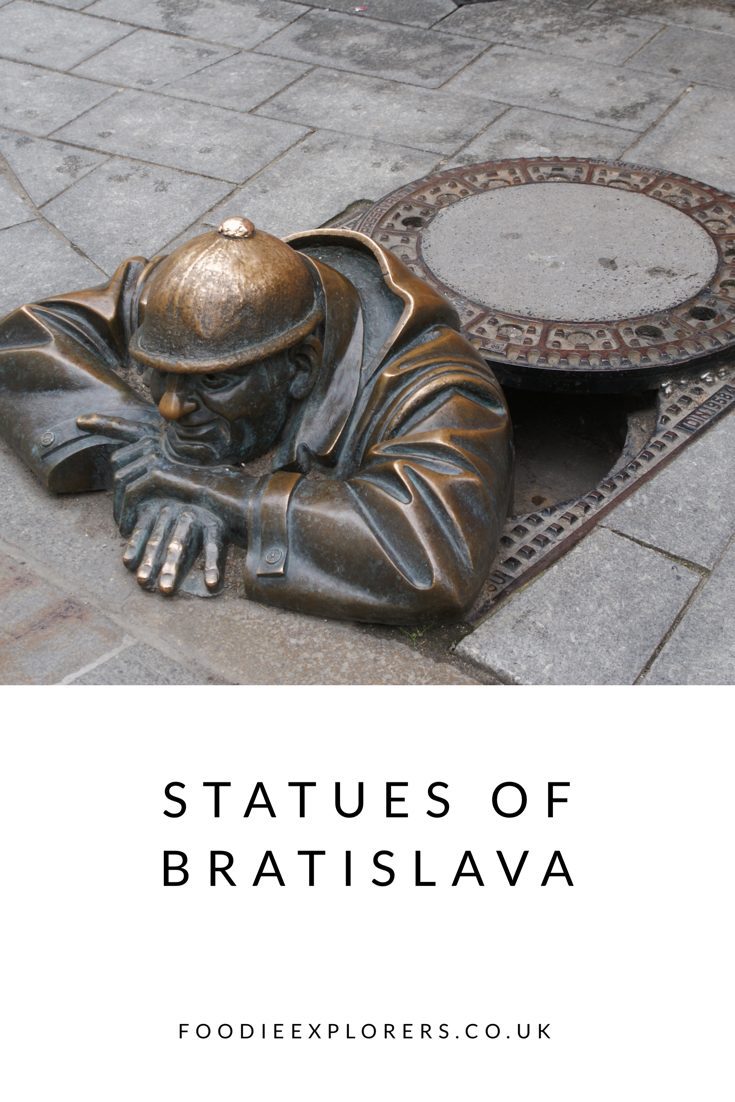