One upon a "crime" in East Berlin

Visiting the Stasi prison museum is a stark reminder of the horrors humans inflict upon each other.

The memorial opened in 1994 in what was the prison for the former East German Communist Ministry of State Security, the Stasi. 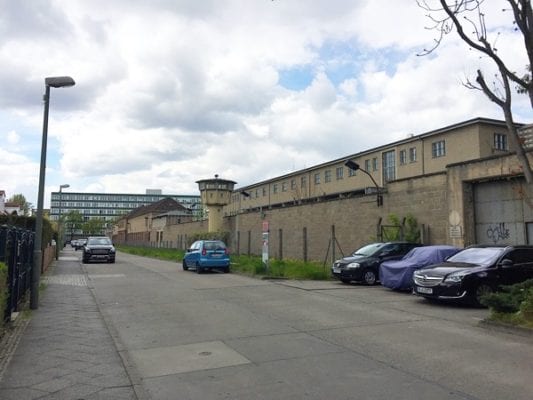 External wall with housing just across the road

The prison was hidden from inhabitants so you won't find it on any maps, it simply did not exist... officially. When the wall fell, many Berliners stormed the main Stasi-Museum building. Here at the prison, information about the regime was put together by inmates and eye-witnesses.  Some former prisoners give guided tours nowadays. 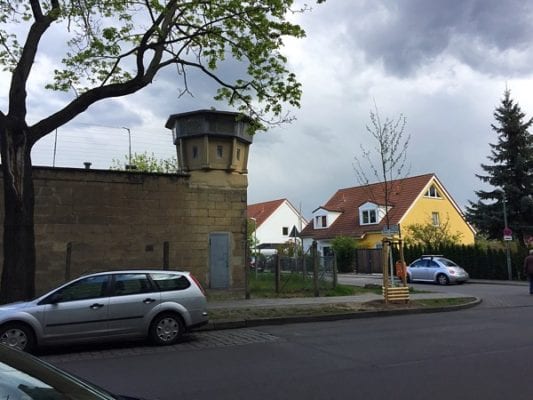 Hidden within sight, next to housing

Enter the Prison through the main gate and turn left  for the information centre and cafe.  This is where you buy your entrance ticket and start guided tours. 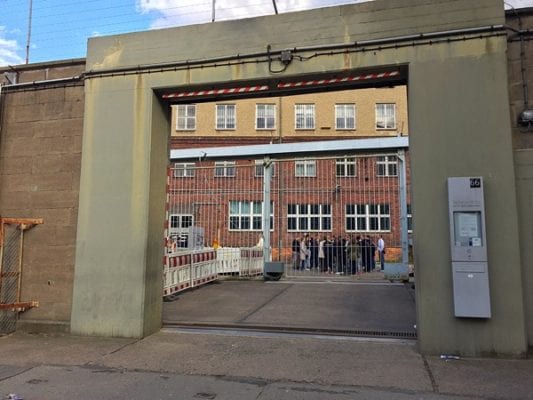 Our visit began with a video outlining the history of the DDR and prison.

The site has been in operation since before World War Two.  This red brick building below was built by the Nazis.  The area housed a factory which manufactured parts for the National Socialist People's Welfare organisation soup kitchens. 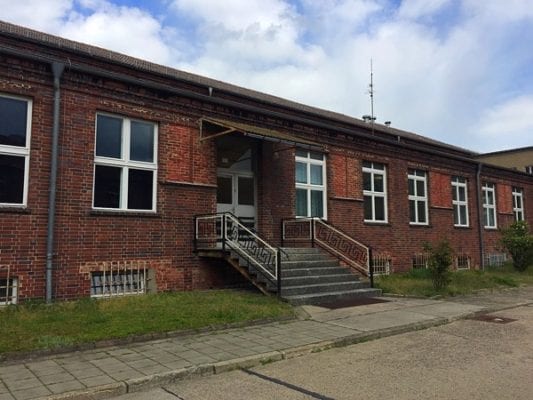 At the end of the war, the Soviet Secret Police took over the area and began to use it as a camp for detaining undesirables before transferring them to long-term prisons. Special Camp No 3, as it was known, processed over 20,000 people up until 1946. 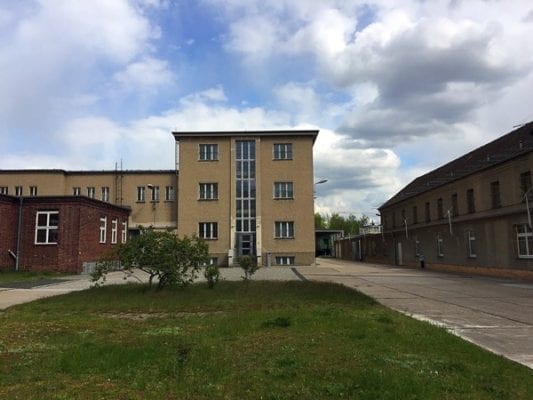 Conditions were poor to begin with, and then they built "the submarine" (German: U-boot) in the basement of the brick building. 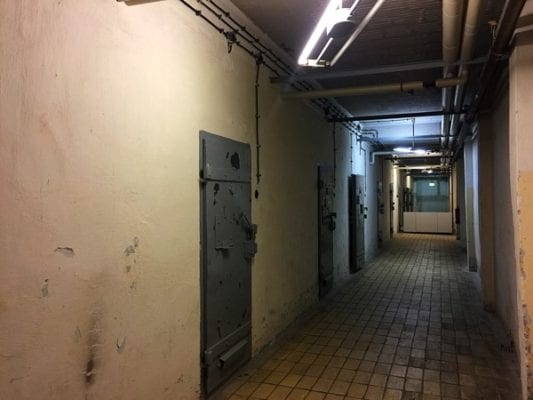 The Submarine was the name given to the underground prison area which was constructed by the prisoners.  The cells here are small, the narrowest have now been destroyed, however you can still see the remains of walls which were used for prisoners to stand in - some cells were so small that a prisoner could not sit or lie down! 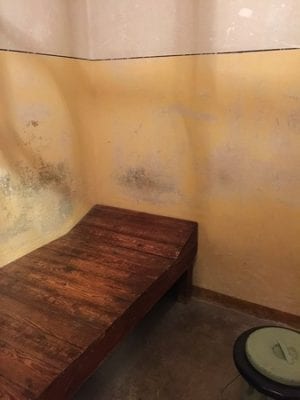 Prisoners could be detained for the most minimal of offences, with little or no evidence. Most only stayed  for a few weeks but despite only being a holding prison, stays for a few months were not unheard of. 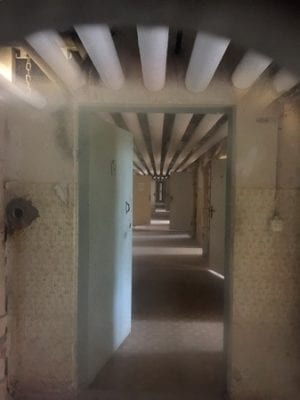 Looking through a spy hole

Some cells were known as "hot" or "cold". Cells beside the heating system were kept warm while others were intentionally cold and damp. But a warm cell was not necessarily a good choice as evidenced by one former inmate:

“When I arrived they asked if I wanted a warm cell or a cool one. It was cold outside so I said I’d prefer a warm one. They put me in a cell where the temperature was maintained above 40°C. I sweated constantly.”

We were shown the "Calming Room".  I'm sure I'd be very calm after being locked up in this padded cell! 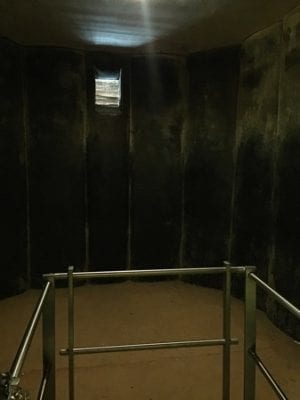 With the signing of the Helsinki accords in 1975 reforms took place to respect human rights. One of which was to end the use of the submarine and construct habitable prison buildings.

This led to better conditions and bigger cells with facilities such as a sink and toilet within the cell, however prisoners were instructed to sleep a specific way - on their backs with their hands outside the sheets - so if they rolled over or changed position they would be woken by guards and told to go back to sleep again! 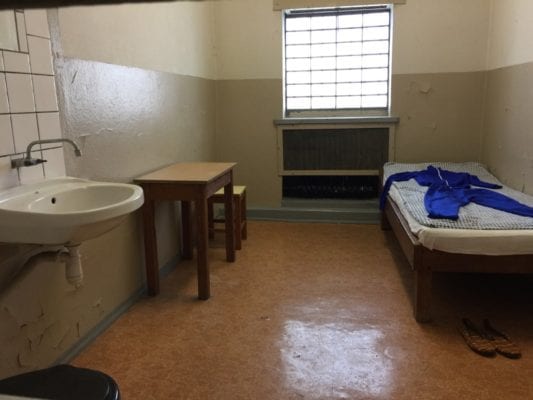 Inside of new prison cell

One of the areas which gave an insight into the regime was the garage.  Here we saw a Barkas delivery van which was used to kidnap prisoners.  The van would sit on a street, looking like an everyday vehicle but inside would be a surveillance team ready to act. 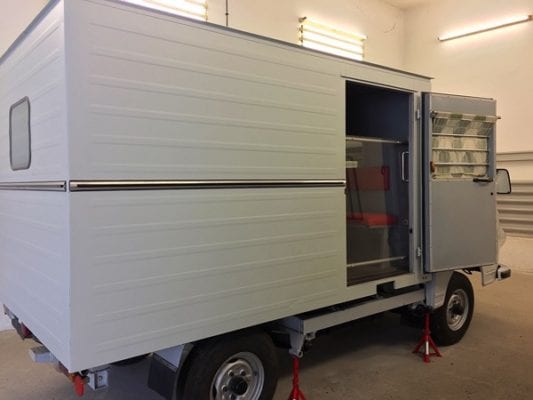 Once kidnapped, the van would drive, potentially for hours to disorient the abductee.  Eventually the van would arrive at Hohenschönhausen to a room filled with bright lights to dazzle incoming prisoners coming out of the dark van. 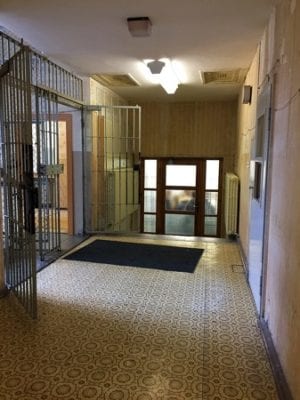 Looking towards the garage

Leaving the garage behind we wandered down a long corridor with a linked cable alarm system running the length of the wall - if the cable was to be broken at any point it would trigger a silent alarm to guards staff. 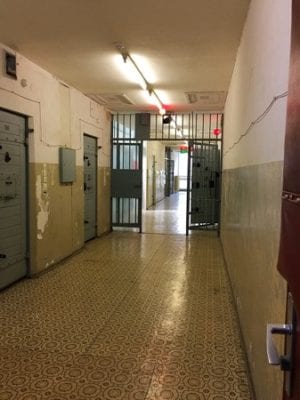 This corridor led us to the interrogation rooms.  The interviewer would sit at the end of a long table. Underneath were recording devices and, if needed, tear gas. Often a recording device would be on the table and turned off in view of a prisoner to gain their trust while the backup would record the conversation anyway. 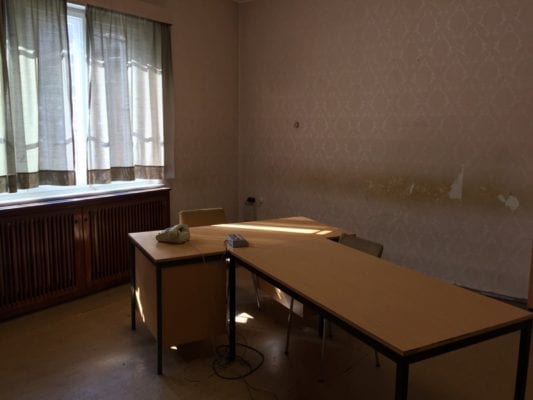 Could you trust anyone here? Prisoners in this building had to share cells and we were told about fake prisoner informants sharing cells to elicit information. 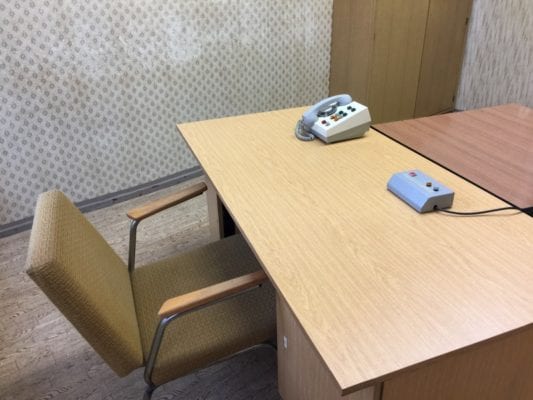 We also heard stories about husbands who informed on their wives, interrogations running for hours and of the "scent store".  The person being interrogated would be made to sit on their hands causing them to sweat.  The sweat would be collected on fabric which  would be stored in case their scent was needed in the future. I wonder how many buildings held information for the Stasi?

We returned to the information centre and looked at the map of the complex.  We received a tour of the prison area however outside the walls are various buildings which were part of the restricted area but not the Prison itself.  Here buildings contained departments concerning surveillance equipment, false passports or anything which the Stasi would require. 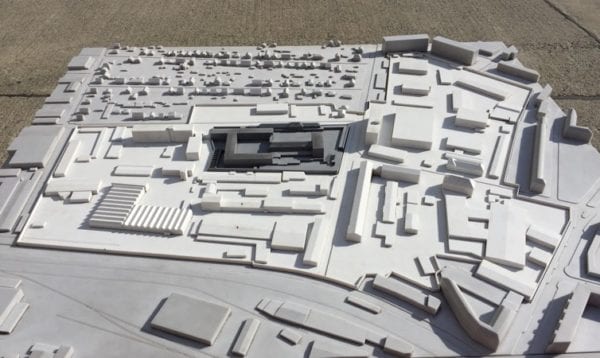 The area in white is the restricted area. The dark grey area the Stasi Prison.

Tram:
From the Alexanderplatz or Landsberger Allee S-Bahn stations, take Tram M5 to the the FreienwalderStrasse stop.

Find out about the Stasi Museum and visit the former HQ 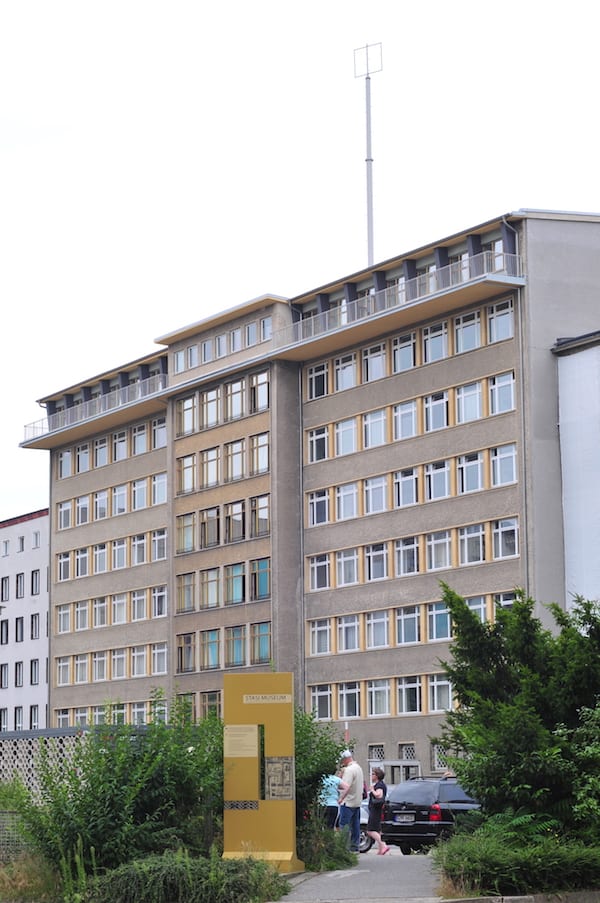