Well, Tom Kitchin has certainly been in the news recently but for all the wrong reasons. This isn't a post about working environments (maybe more on that in a future post) but rather about our experience visiting The Kitchin in Leith. Note that we did visit when alcohol still wasn’t allowed indoors but we had originally booked The Kitchin before COVID-19 reared its head so our visit had been rescheduled numerous times. We were really looking forward to finally visiting… 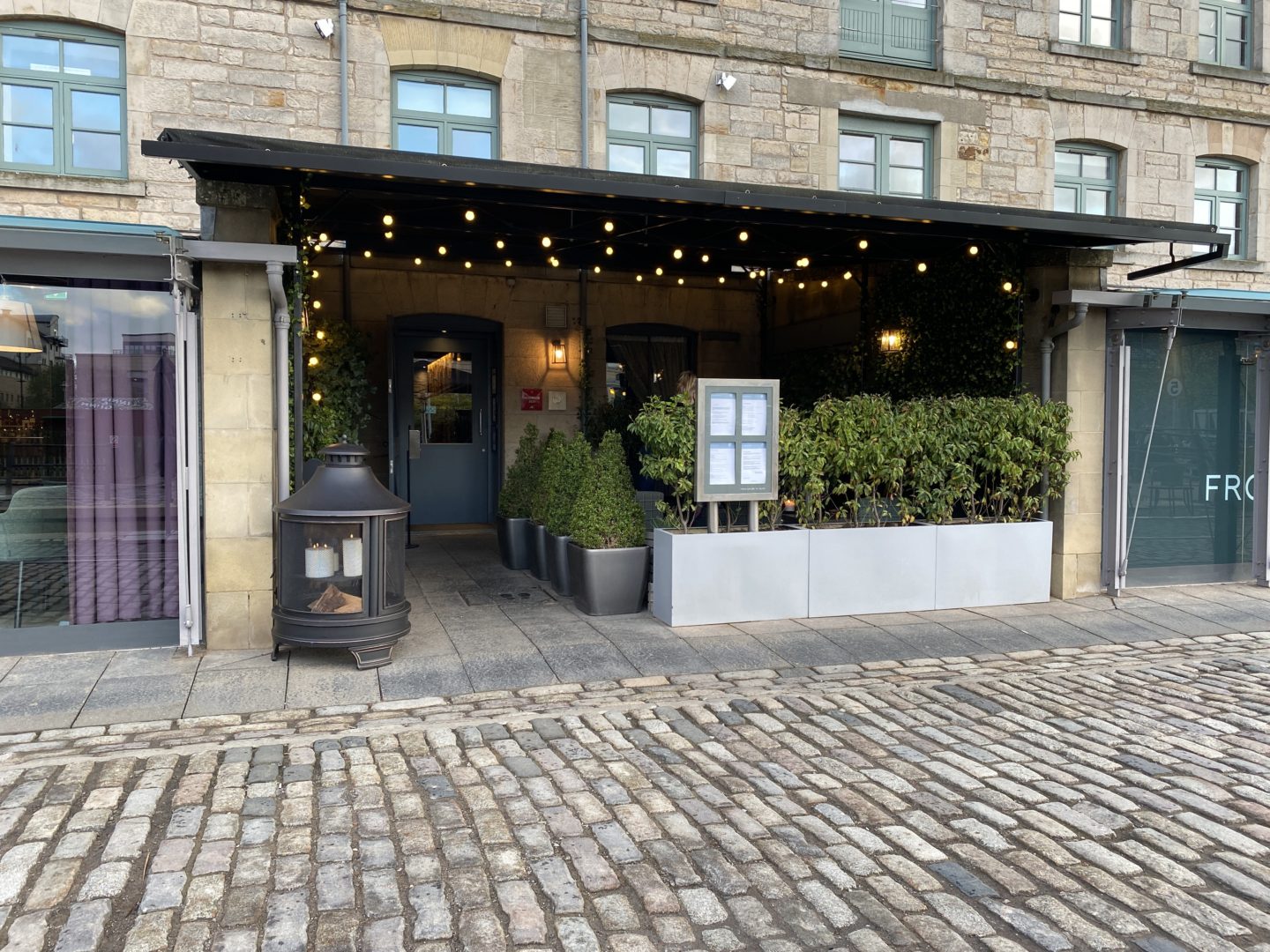 The sylvan entrance, as we soon discovered, also doubled as a very busy beer garden as behind that row of manicured greenery, many tables were crammed in. 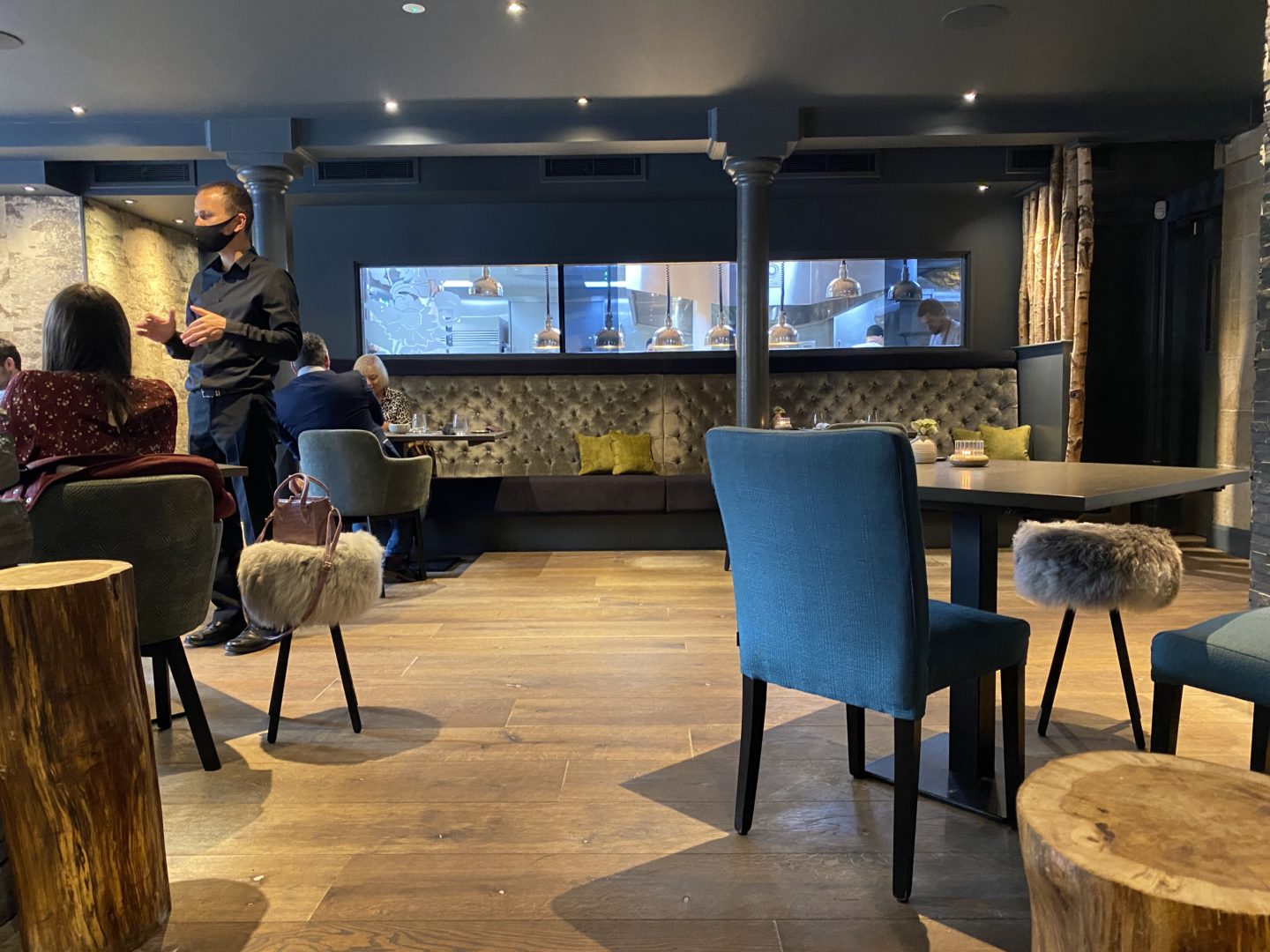 For a Michelin-starred restaurant it is surprisingly large inside and we were seated in such a position that we could view the aquarium-like windows into the inner workings of the Kitchin, Tom’s kitchen, and he was there during our visit. 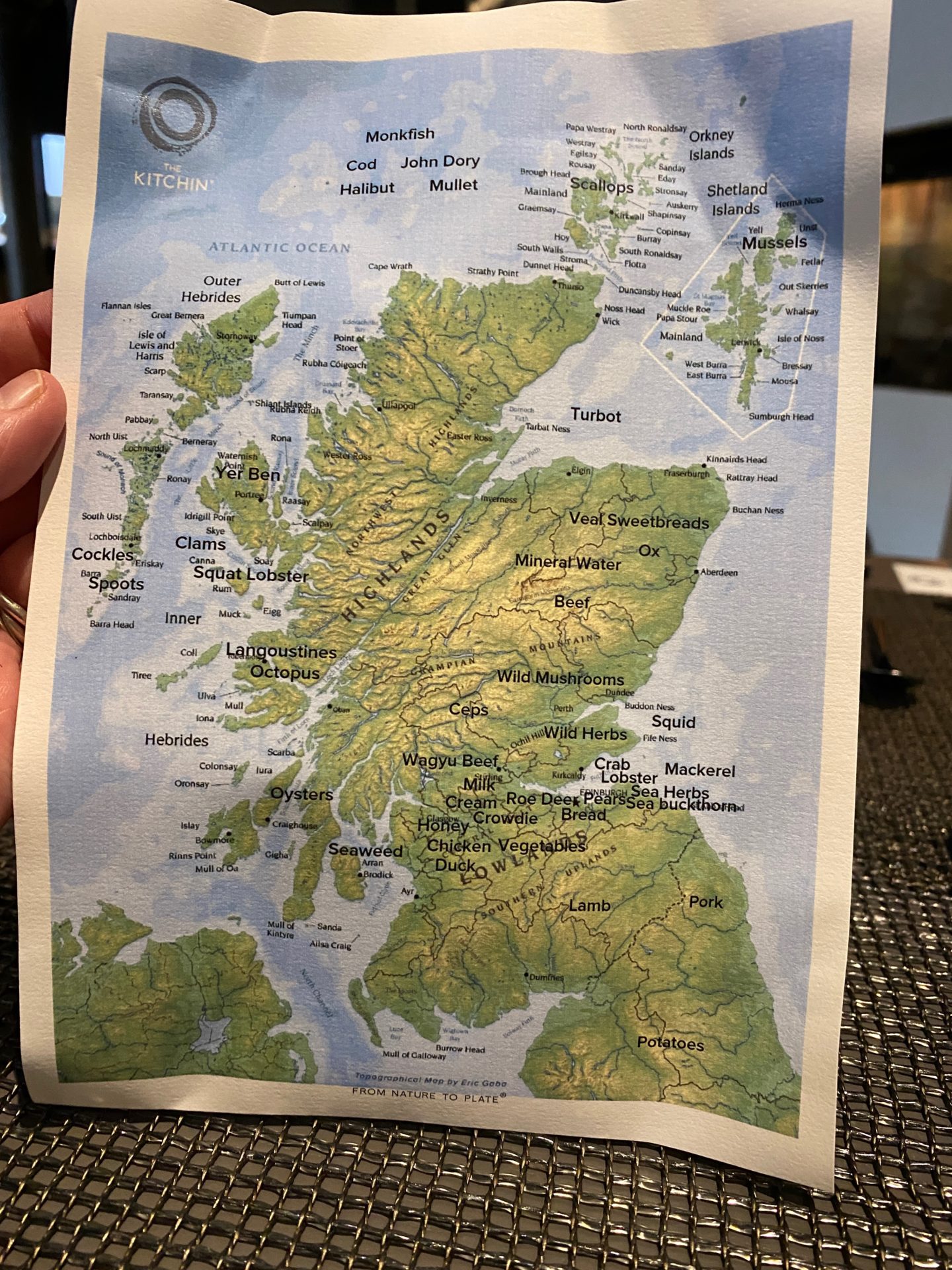 A rolled-up map of Scotland was presented, showing the areas where The Kitchin source their produce but when your menu is all about “from nature to plate” it would have been good to know more about who the suppliers are and why they are used. 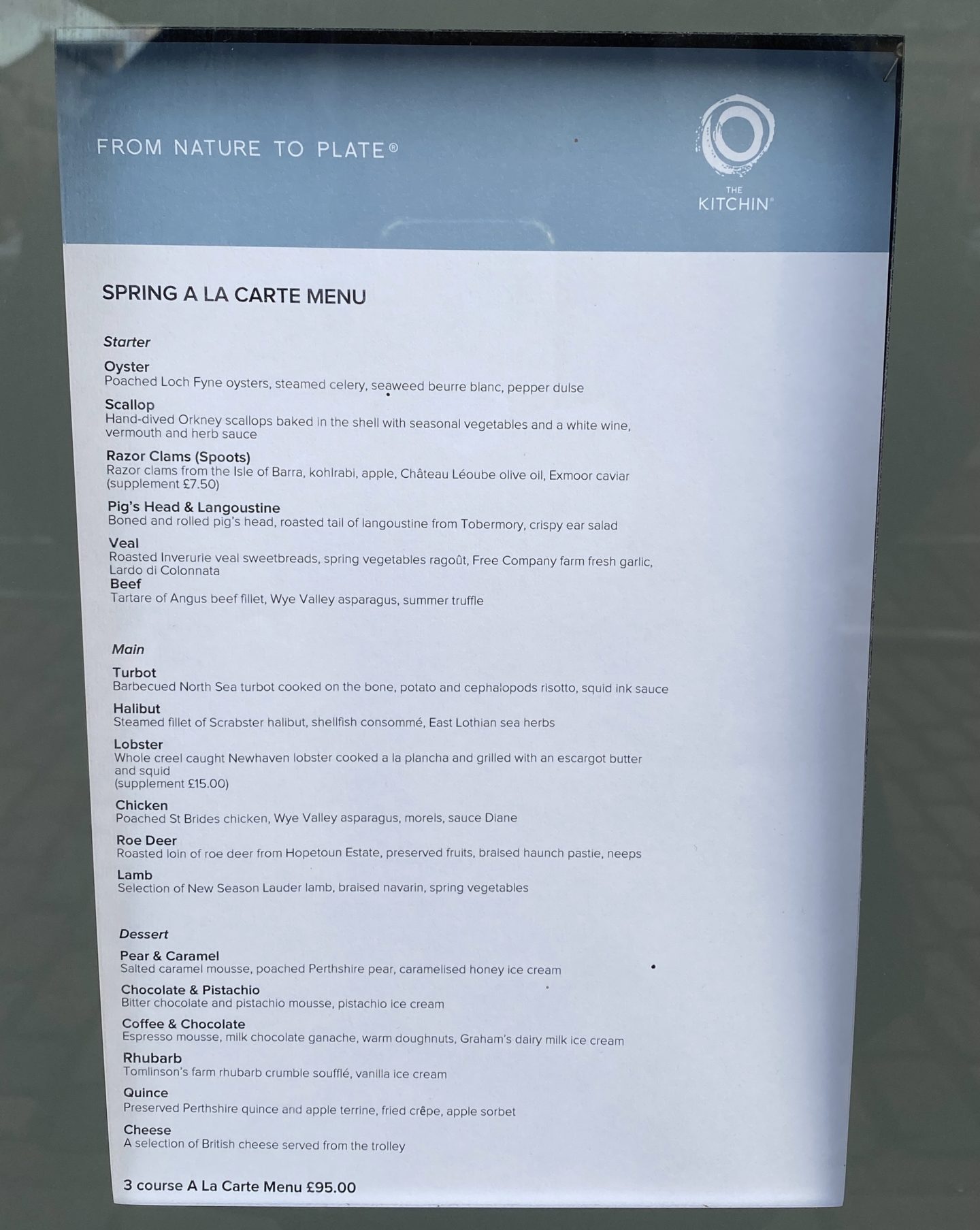 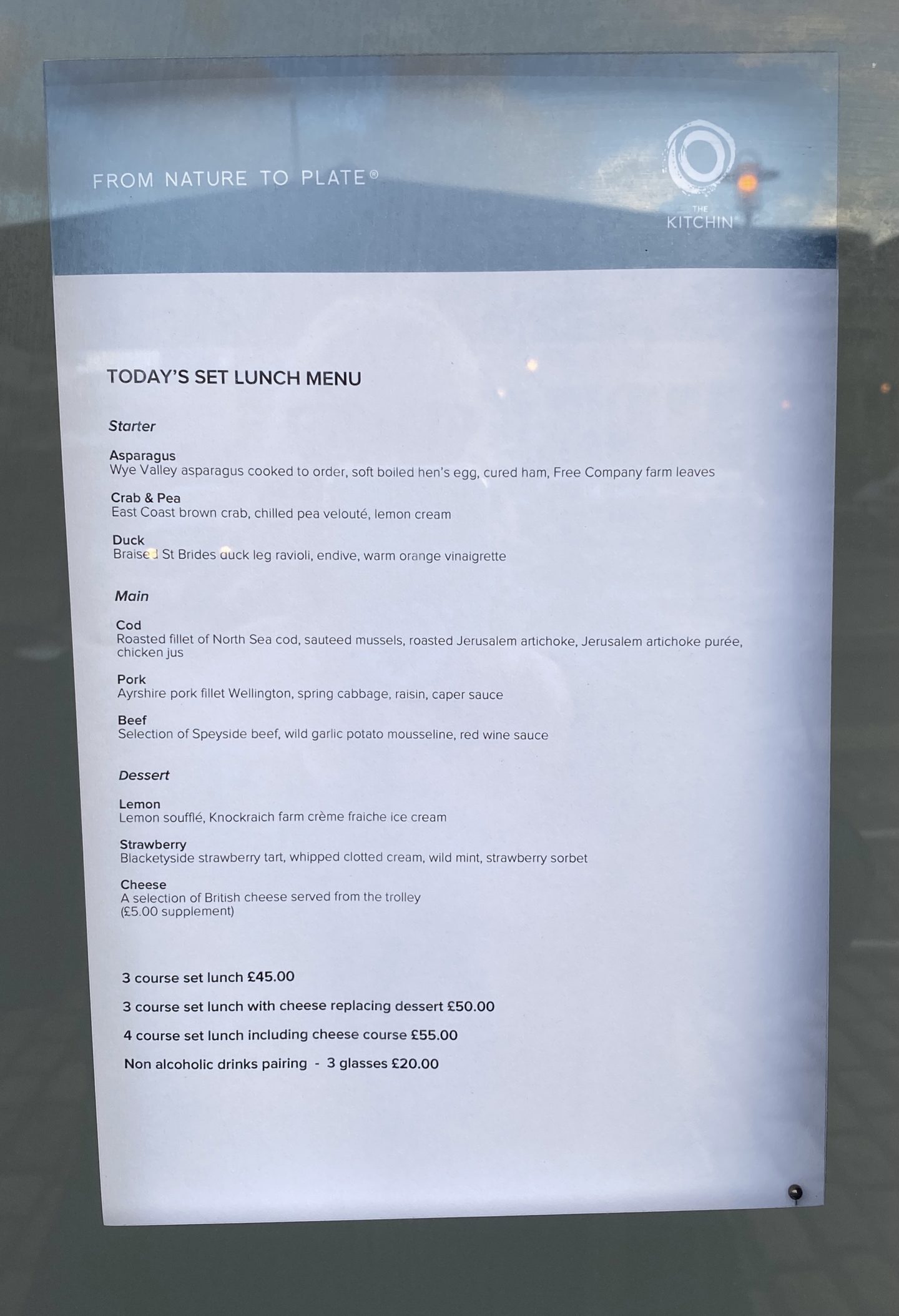 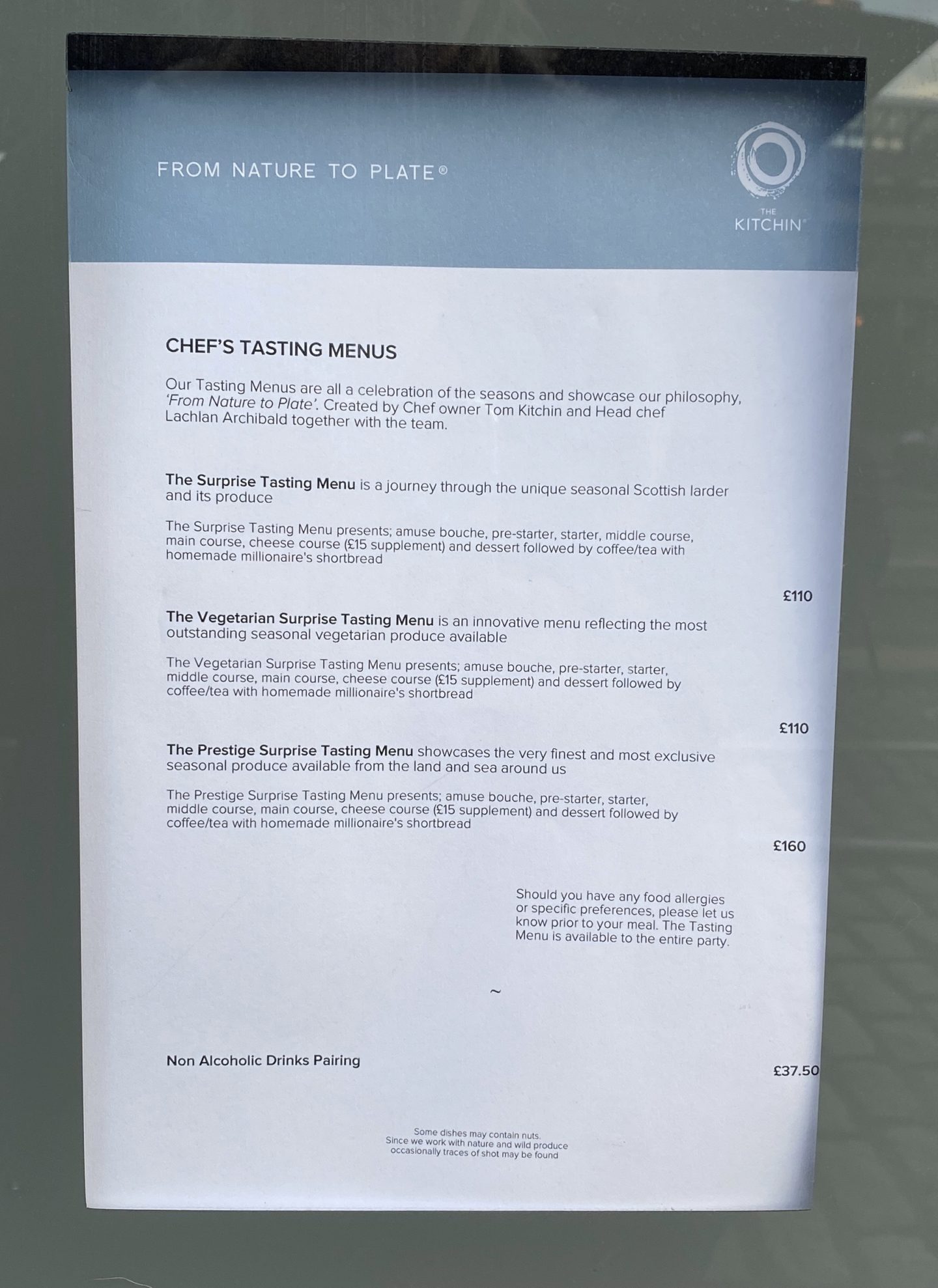 We visited during the restrictions on drinking alcoholic drinks indoors, so opted for alcohol-free drinks of a Nogroni £8 and Sleight of Hand from Tempest £6.  A bit steep for non-alcoholic drinks never mind the setting. The beer was possibly the best alcohol-free one we‘ve tried though. 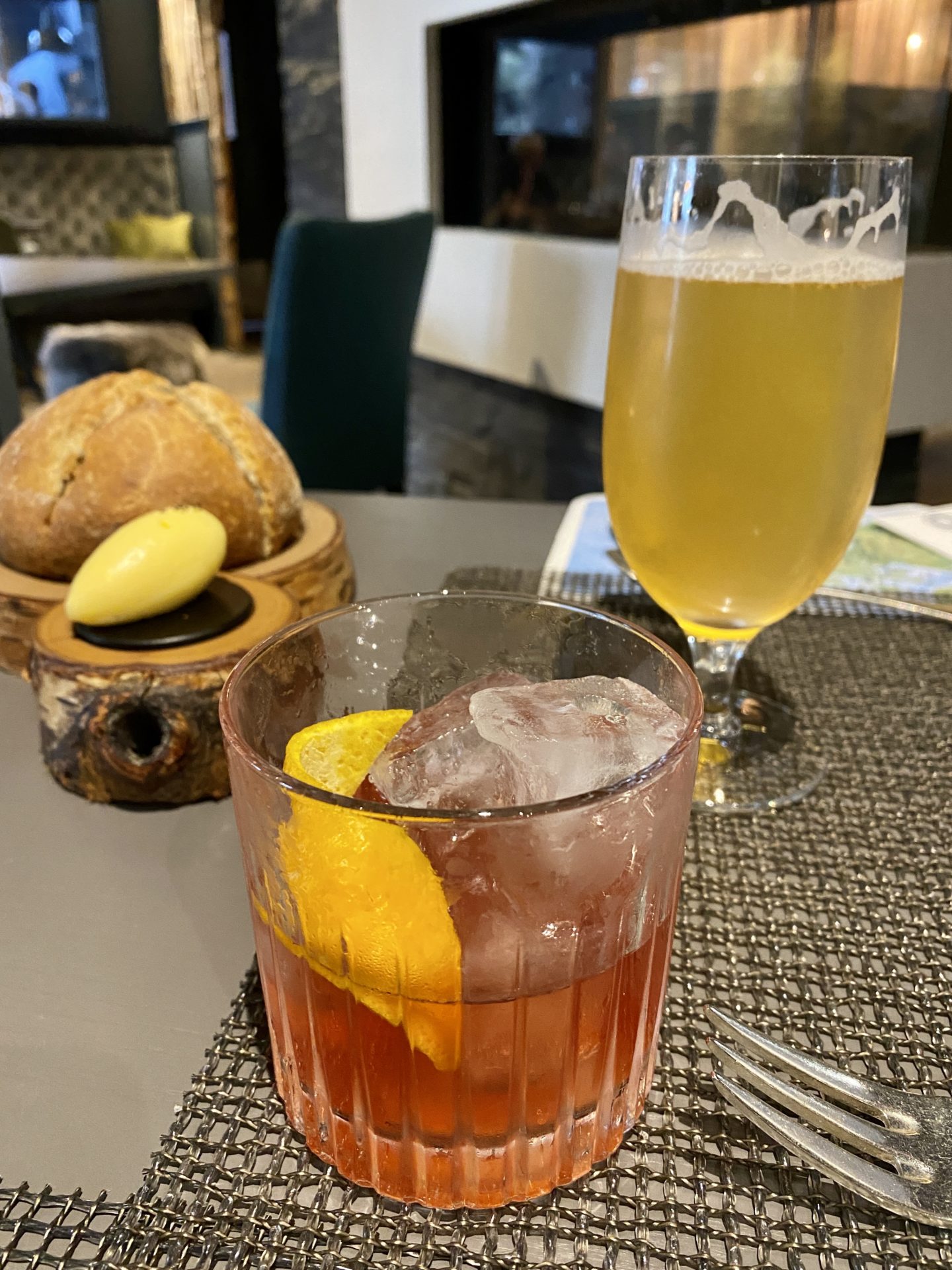 Our amuse bouche arrived soon after. Mackerel mousse tart with green apple. A competent tart, but for a Michelin star restaurant with 5 AA Rosettes we were expecting something a bit more innovative. However, the bread and butter were very tasty, which is always a good sign. 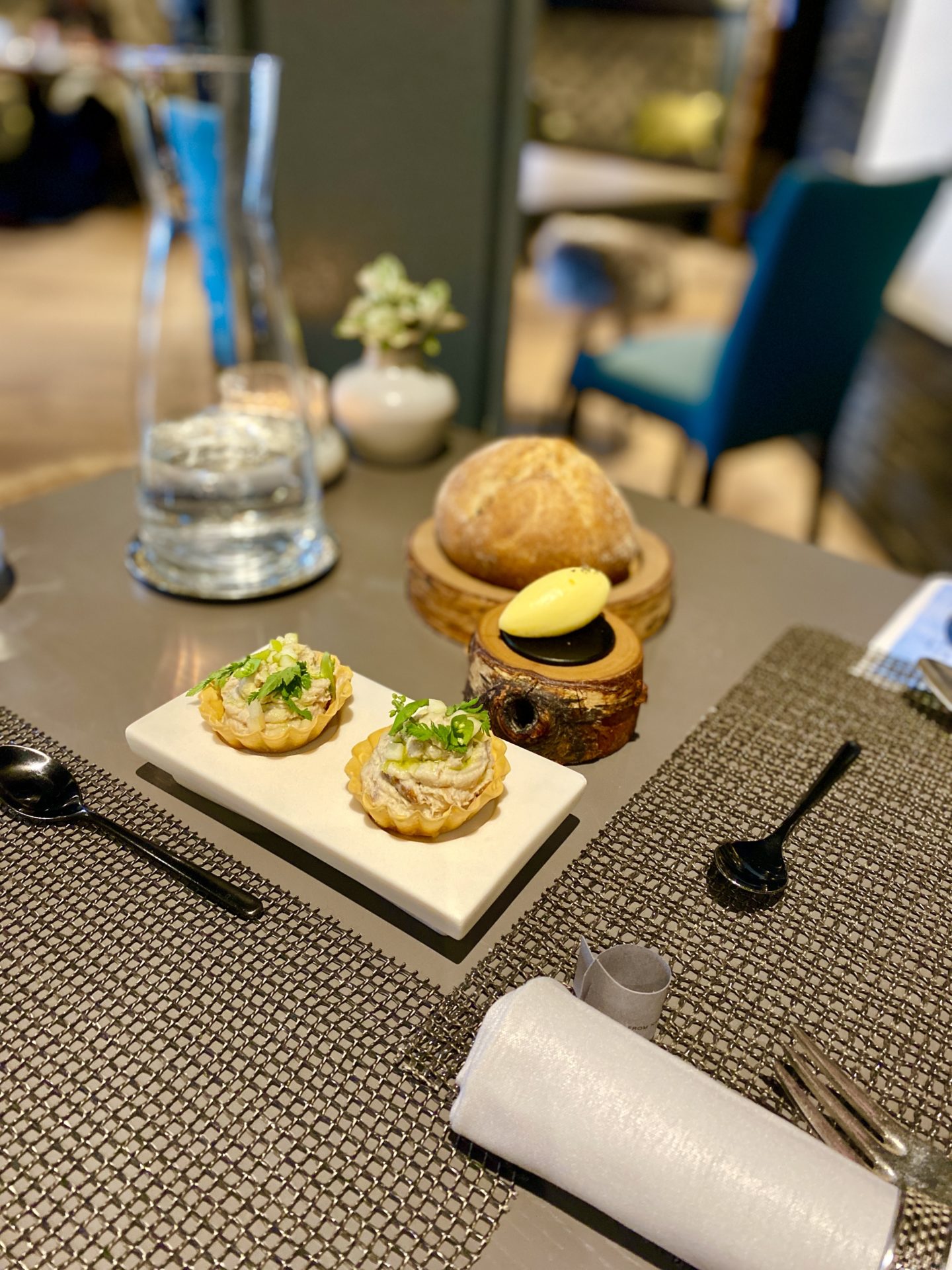 Next up was a Scotch broth with puffed pearl barley and spring vegetables. Lots of flavour here, however, it did look a bit like a cup a soup so we almost expected a cheeky circular pasta shape or crispy crouton to appear. 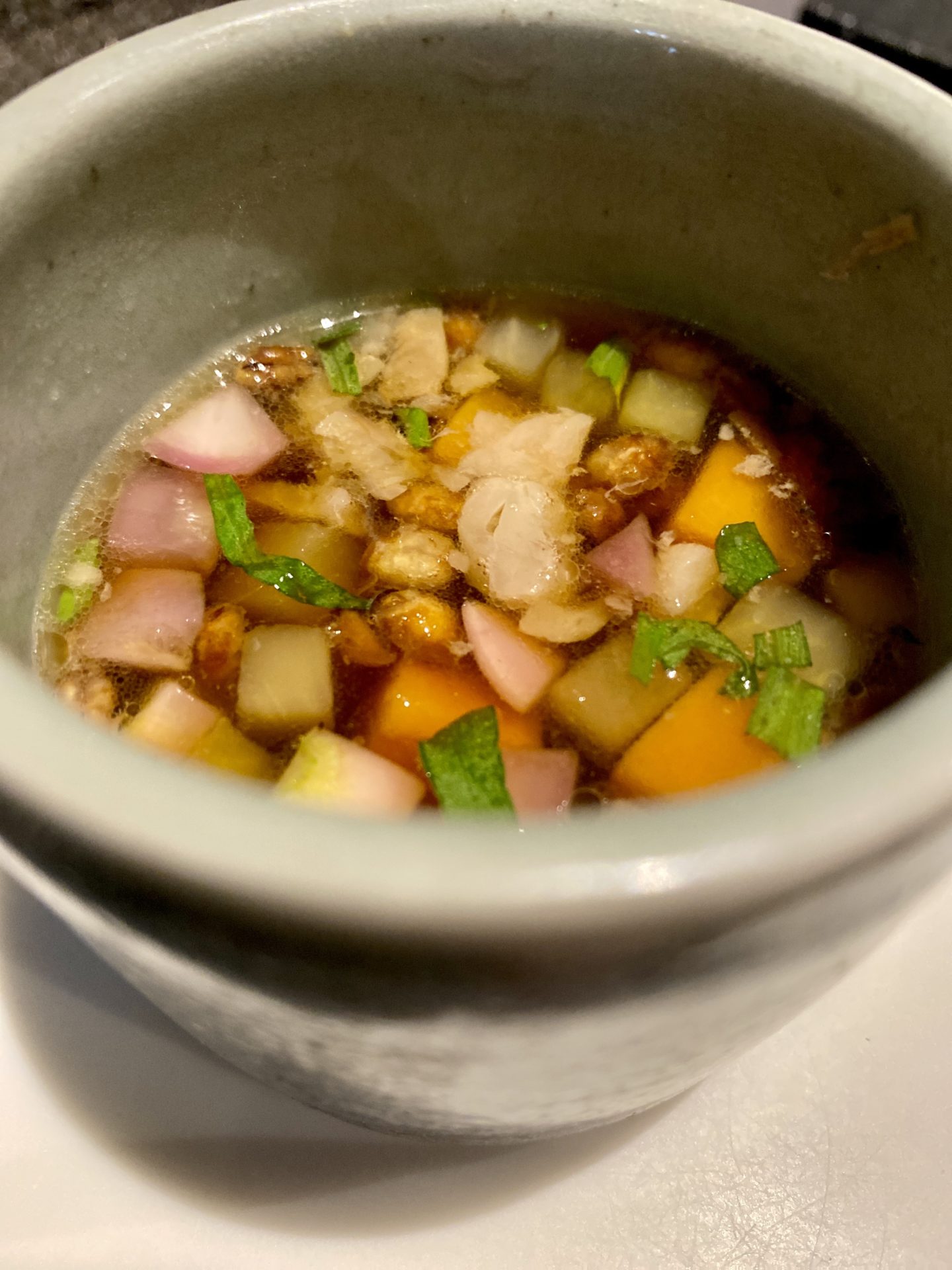 Scallop in a White wine sauce next up. Sealed with puff pastry then cooked. Plump scallops bathed in a decadent sauce. 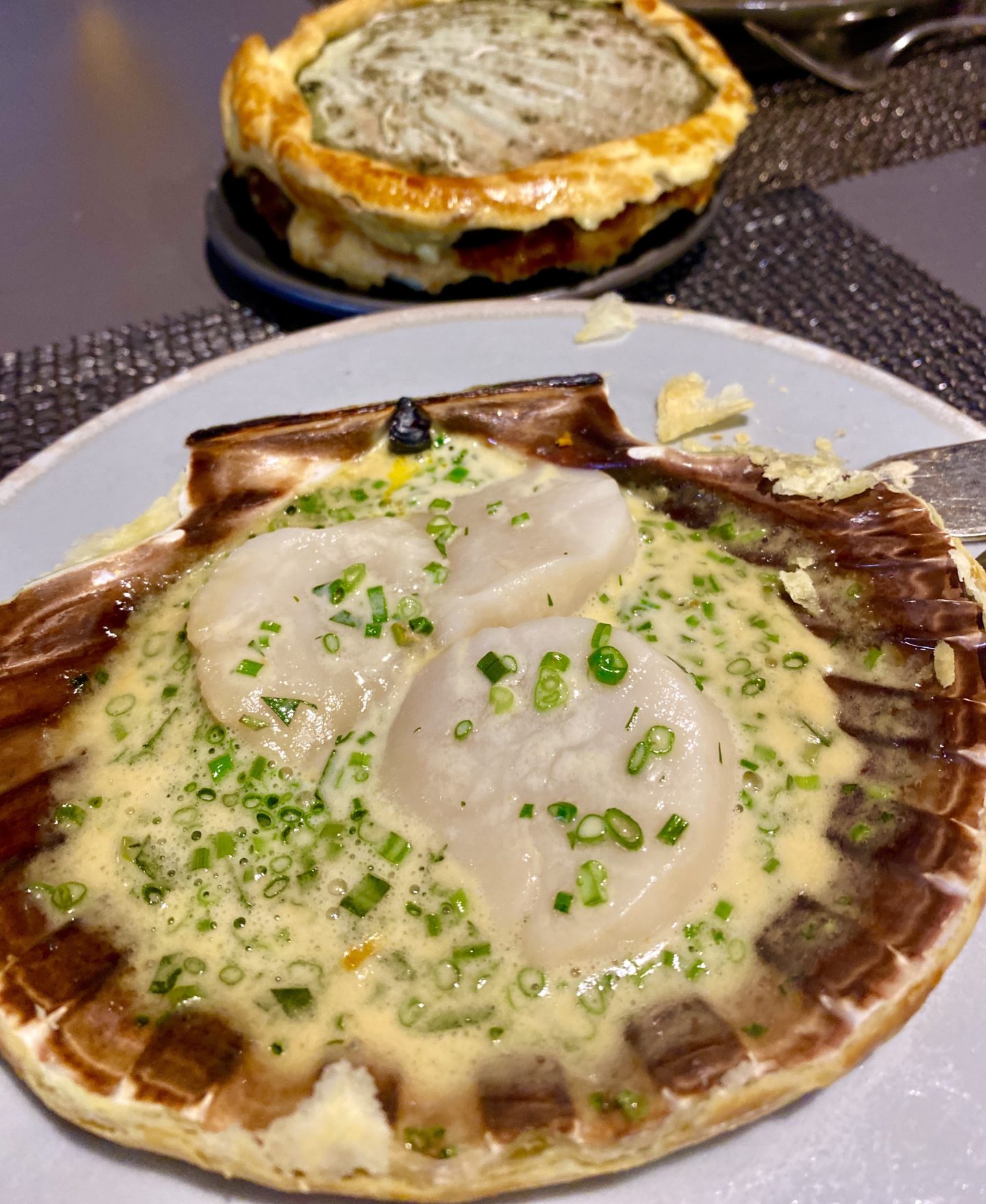 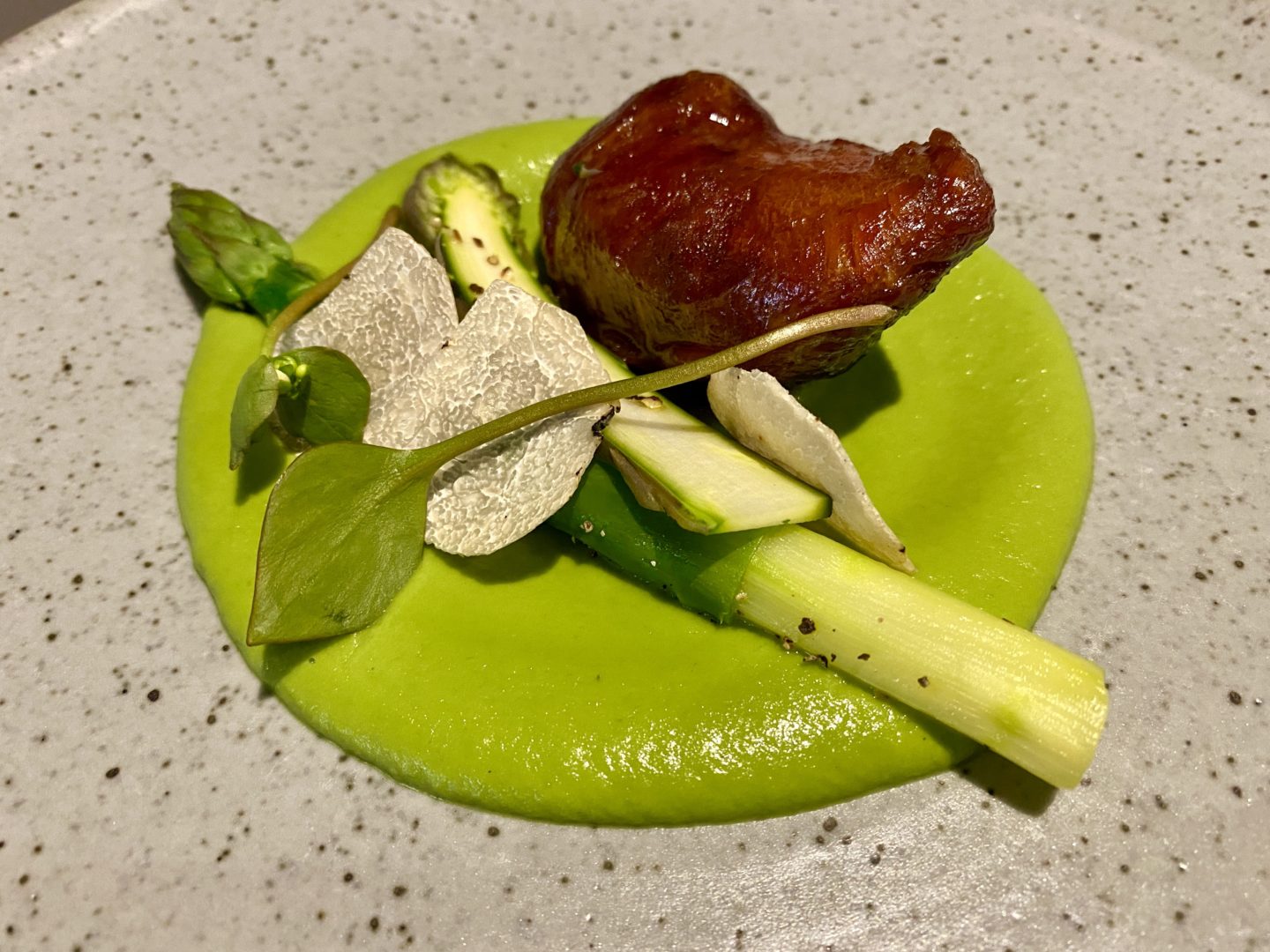 Roasted Red mullet served with squid Bolognese followed. Brandy-blanched squid and octopus salad. Excellently cooked fish with the bolognaise sauce being the star here. The octopus salad seemed like an afterthought though - we felt there was too much going on in this plate with too many flavours fighting. 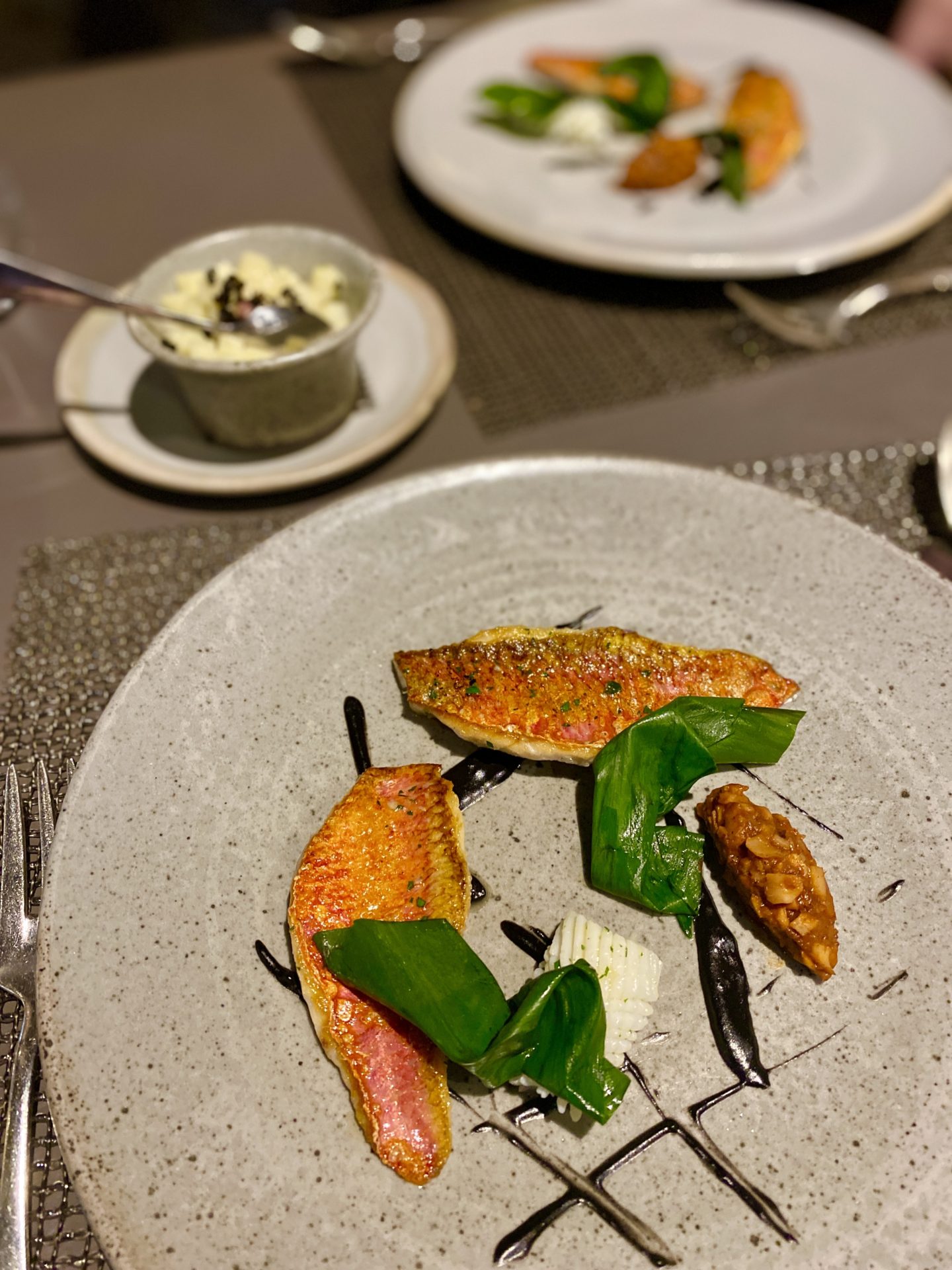 Then came Venison, from Hopetoun estate, with turnip and pear poached in red wine syrup. The venison loin wasn’t too gamey and the poached pear was perfectly cooked. But again, a little underwhelmed with regards to innovation. 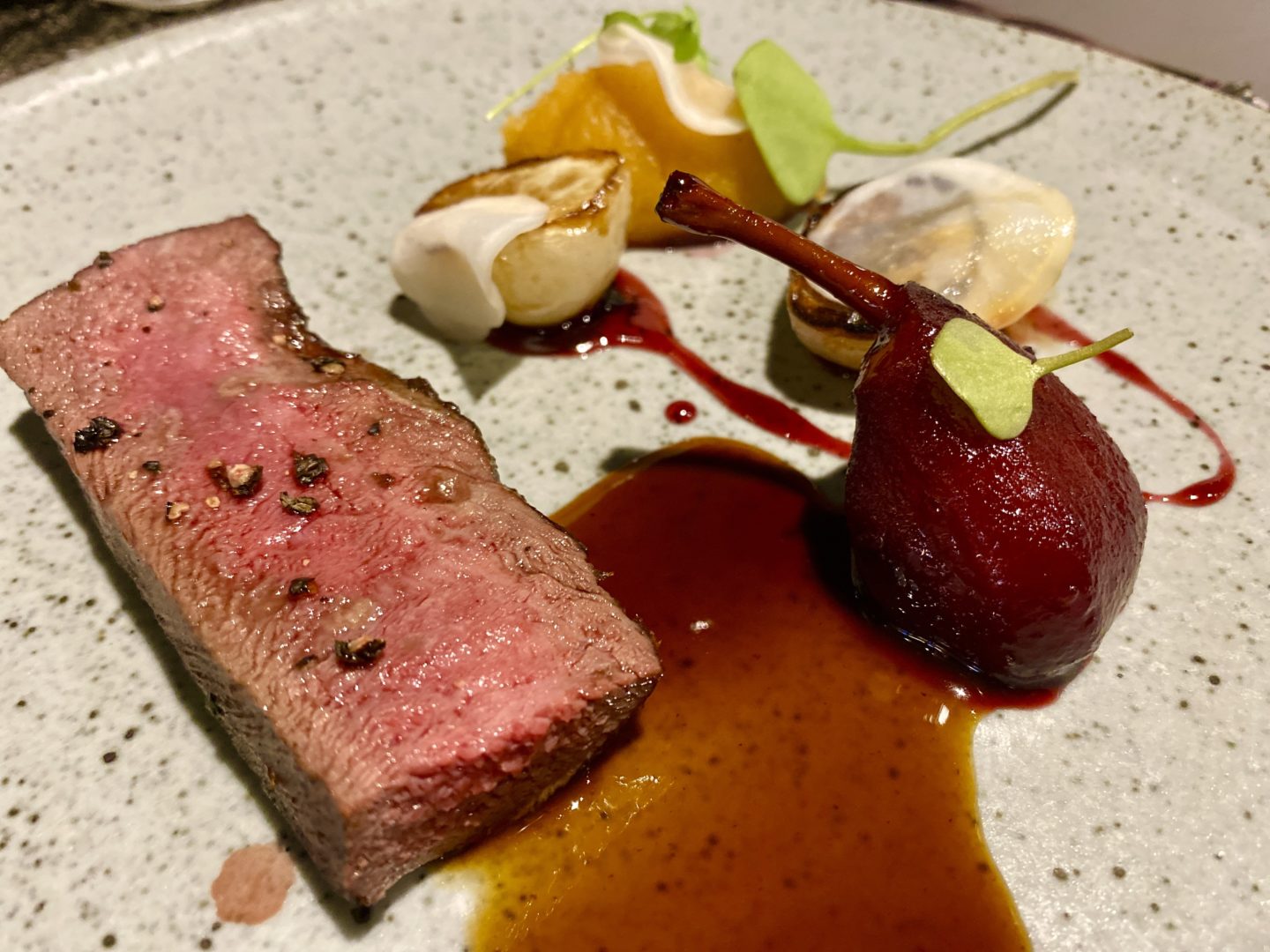 Pre-dessert was Chef‘s take on a Pannacotta
Crowdie mousse with Sea buckthorn sauce. Smooth, creamy and tart. Good to see sea buckthorn as not enough Scottish restaurants use it given that it grows in abundance in some coastal areas. 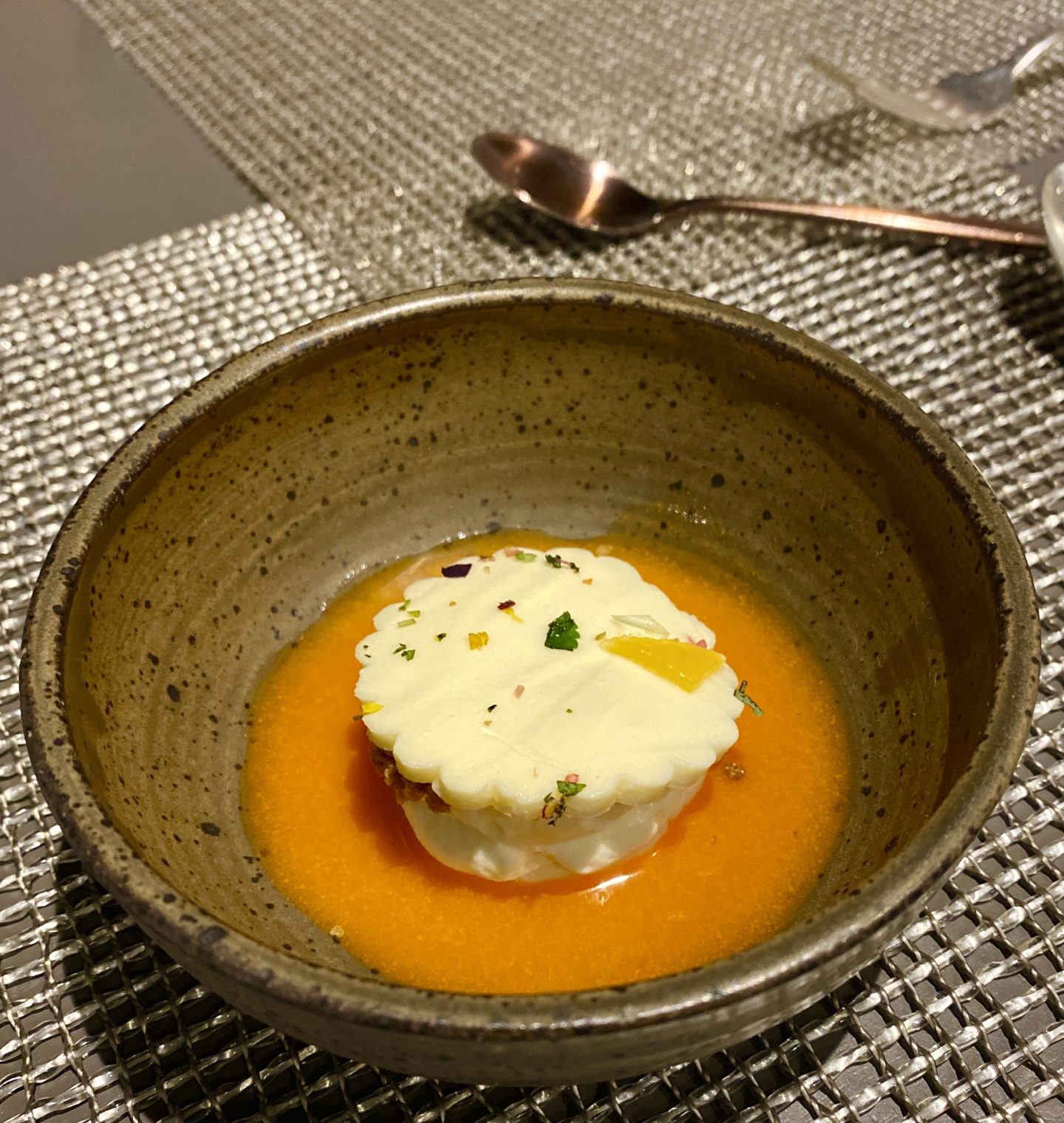 The finale was Forced rhubarb and chocolate soufflé. Light, fluffy and sweet but not tart, served with an exceedingly creamy vanilla ice cream. 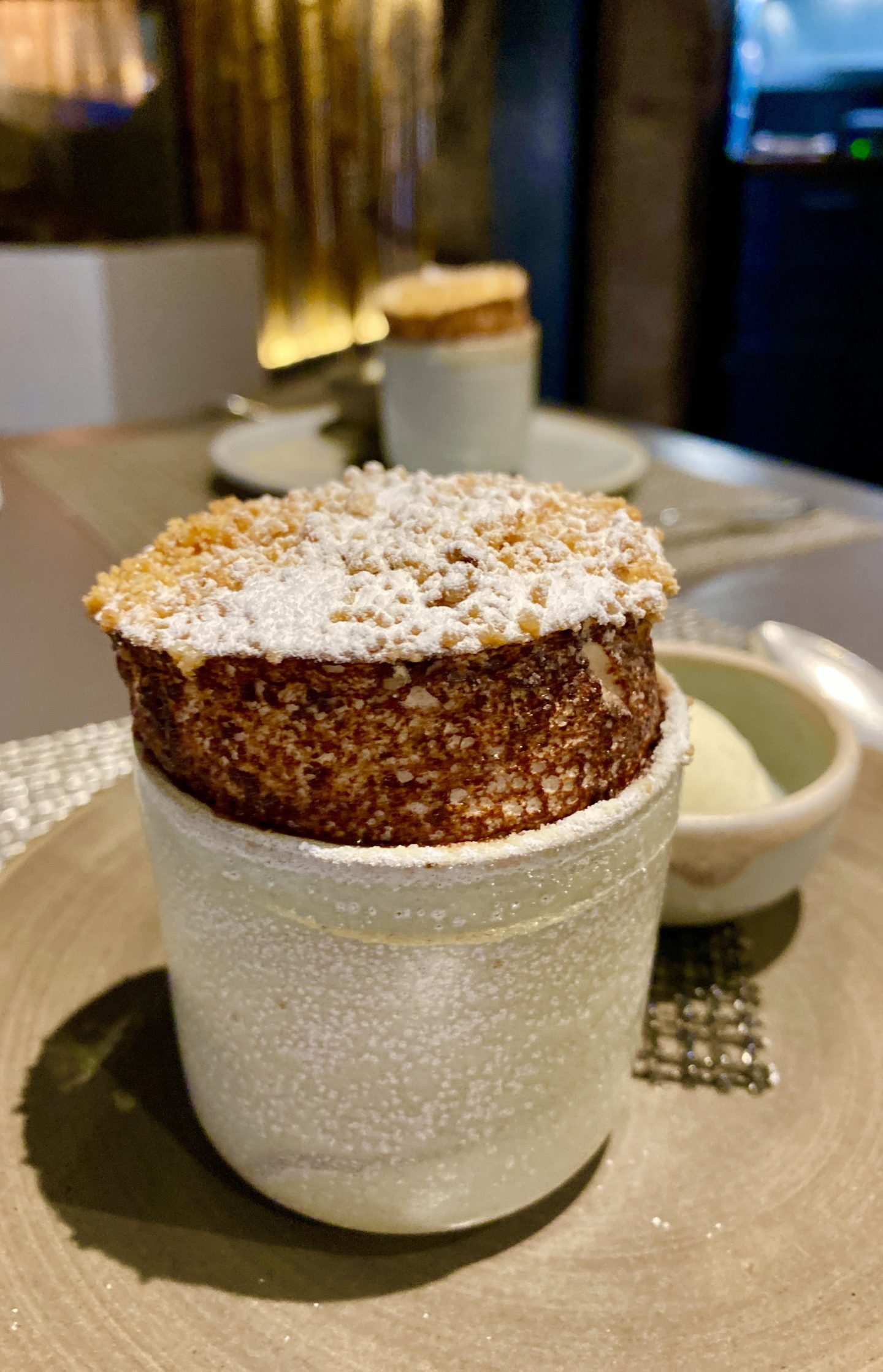 Finally some tea, coffee and petit fours. The worst part of the experience as you‘re about to see. 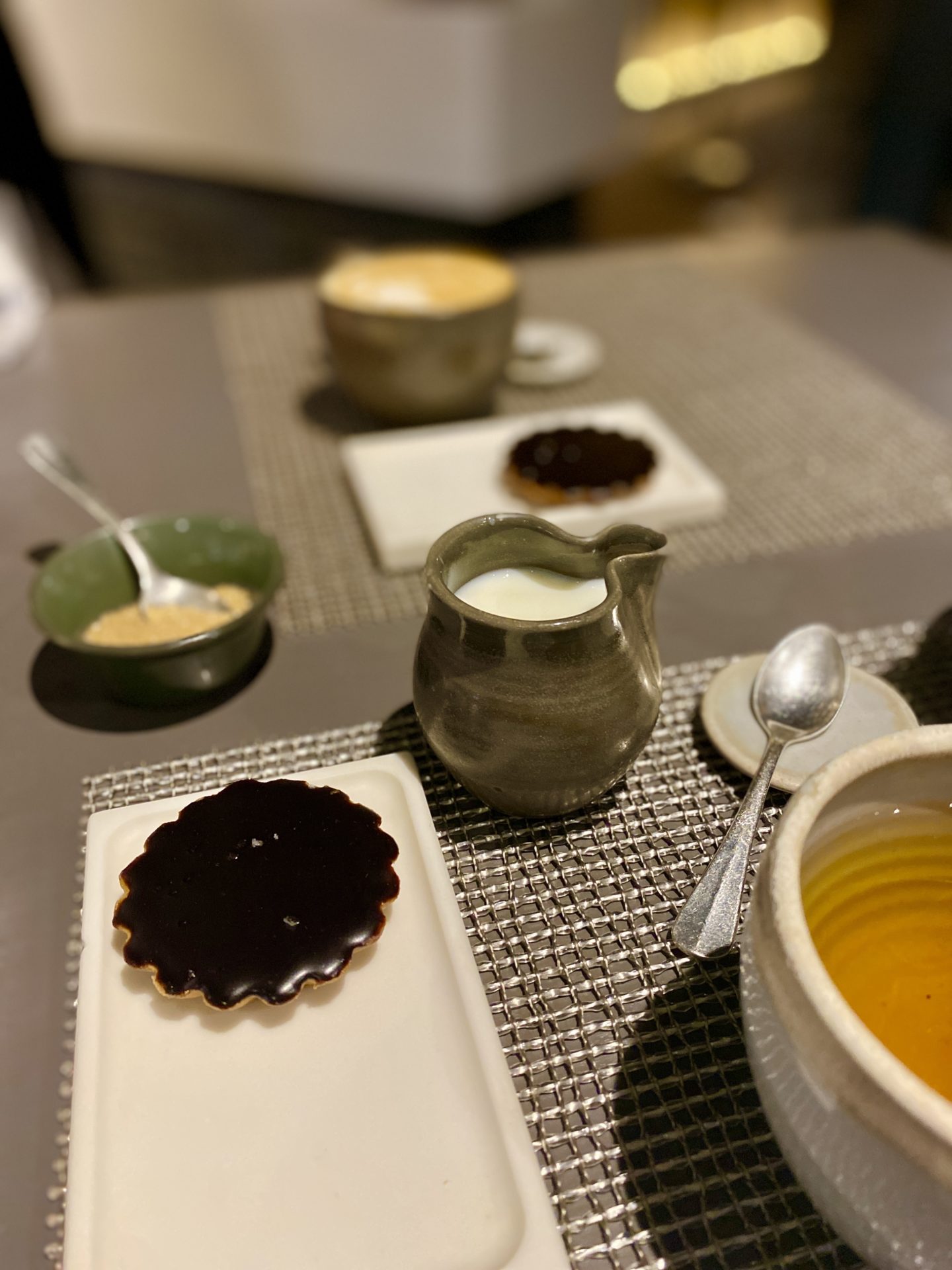 It seems that there is a tea leaf shortage at The Kitchin as this was weak and watery and set a new low for how not to make a cuppa. Even greasy spoons get this right! 😕 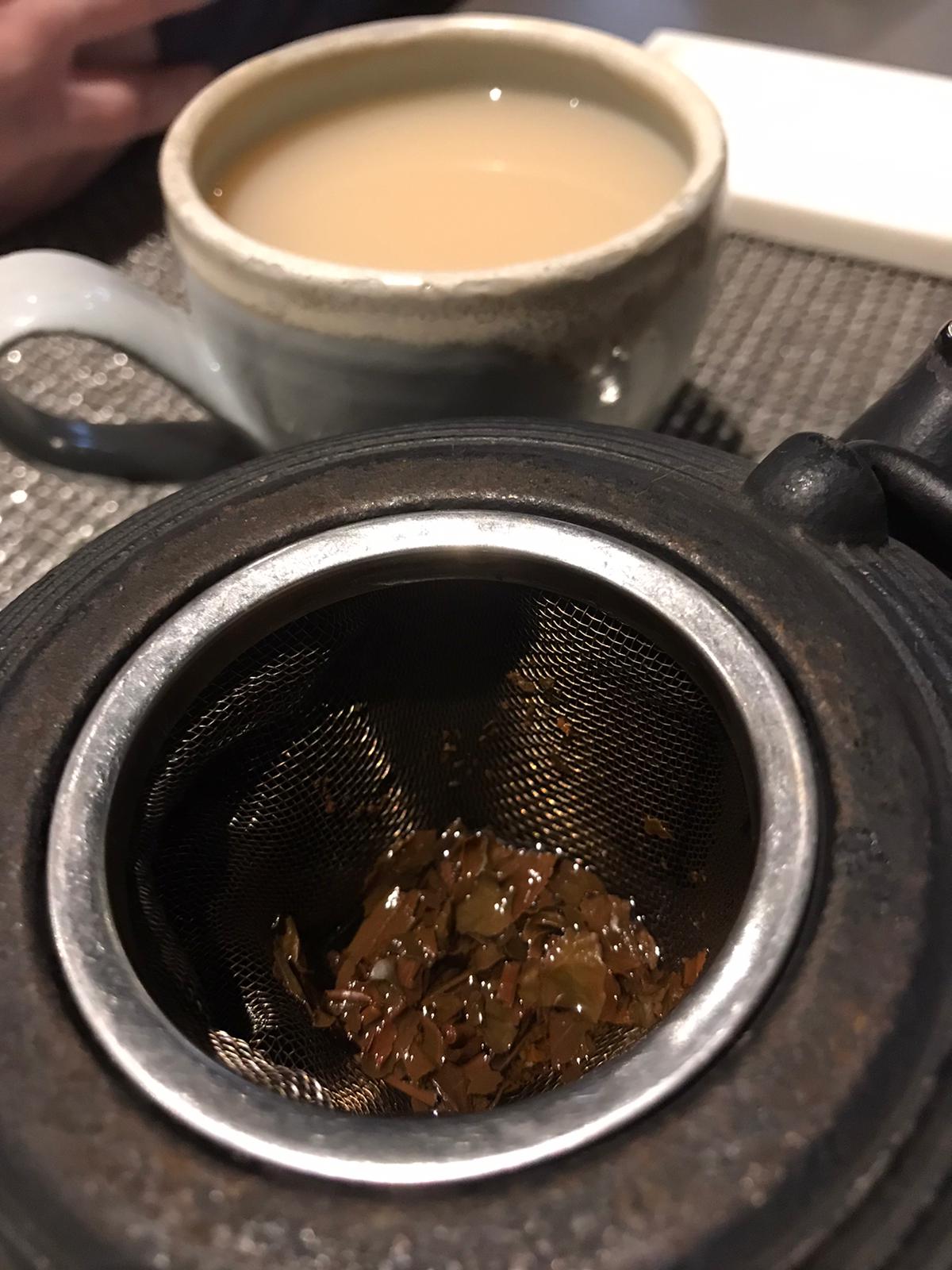 😒 It was good but…the atmosphere inside is like you should be happy you got a table. Dinner service had been brought forward, our seating was at 4pm, with guests coming and going for alcoholic drinks outside between courses, I know this isn’t the Kitchin‘s fault but I can’t think of anywhere else we‘ve eaten in during COVID times were this was so apparent so there really wasn’t a steady atmosphere. We also barely understood the staff explaining the dishes, and not just due to face masks. They seemed to be in a rush to be somewhere else at all times. Contrast this to Bibbendum in London where we ate a few weeks after this and it was so calm and relaxed in comparison.

The food is obviously the main reason for dining at the Kitchin but the dishes weren’t that memorable, and the impression we left with was somewhere that is resting on its laurels.

Given the adoration given to Tom (pre-recent controversy) and all the things we‘ve heard from people who dined there in the past, the length of time we had to wait, the £120 per person cost, the Michelin star and the 5 AA rosettes it was underwhelming compared to a number of the other great restaurants we‘ve eaten in this year - Mono in Edinburgh, Claude Bosi at Bibbendum in London, Isle of Eriska, Crabshaak, Eighty Eight and Unalome by Graeme Cheevers in Glasgow, in fact we ate there when it had only been open for a few days and it was a much better overall experience.

Our experience really is summed up by the tea.