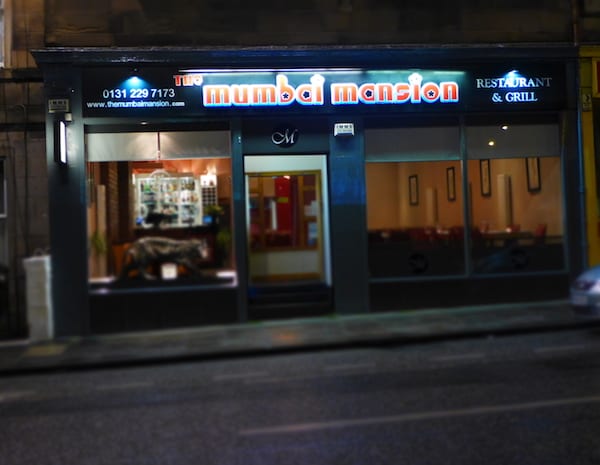 One of Edinburgh's best Indian restaurants, near to Haymarket Railway Station

Located between the Jolly Botanist and Chop Chop on Morrison St, this is where the head chef (and many of the staff) from the well-regarded Indian fine-dining restaurant Mithas have relocated after its closure in 2015. So if you were ever in Mumbai Mansion and remember seeing pakora on the menu pay it another visit and you'll find that the menu is completely different now that it has the Mithas touch (did you see what I did there?). 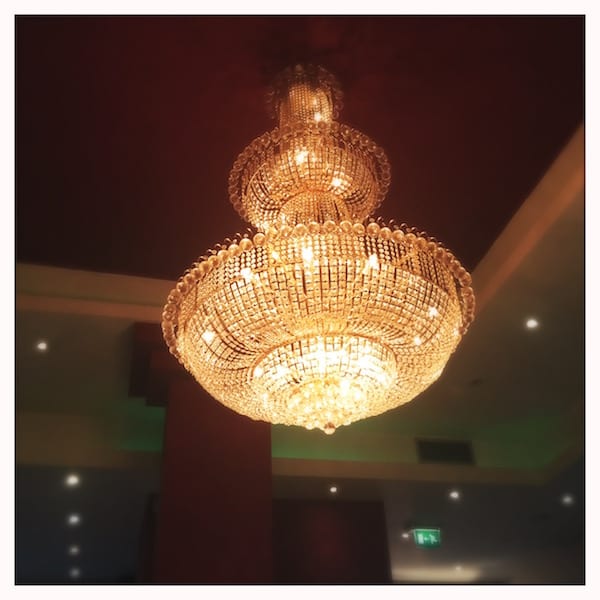 Inside the decor is bright and modern, a huge chandelier dominates the room and it has a huge mirror down one side making it appear deceptively large. The tables are interesting in that they each have a map of the Indian regions underneath the glass. 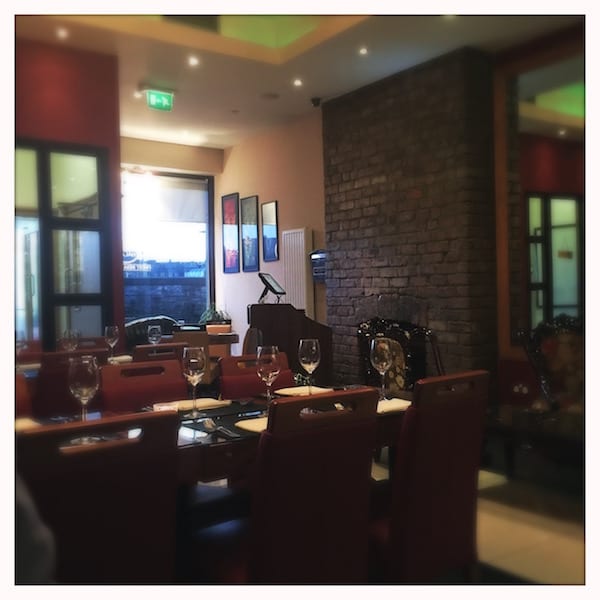 We settled down with a mango lassi and a mango & ginger lassi (£2.75 each), still feeling the effects of the night before with Lunchquest. Had we not been drinking the previous night then we would probably have been tempted by the 750ml bottle of King Cobra, a 7.5% double fermented pilsner-style lager. 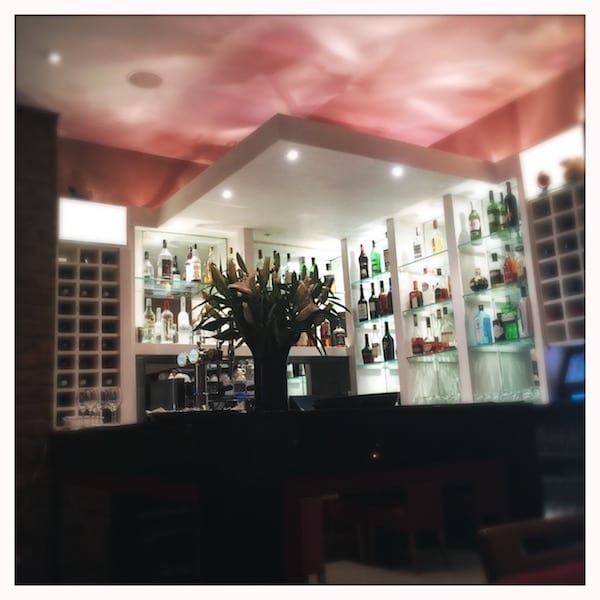 The menu is pretty unusual for an Indian with items such as guinea fowl, scallops, venison and duck on the à la carte, there's also a meat and vegetarian tasting menu (a minimum of 2 people must order). We decided on scallops & mussels and the venison to start followed by hake and tandoori prawns.  The waiter recommended lentils on the side as an extra piece of oomph. (Drinks menu here and wine menu here). 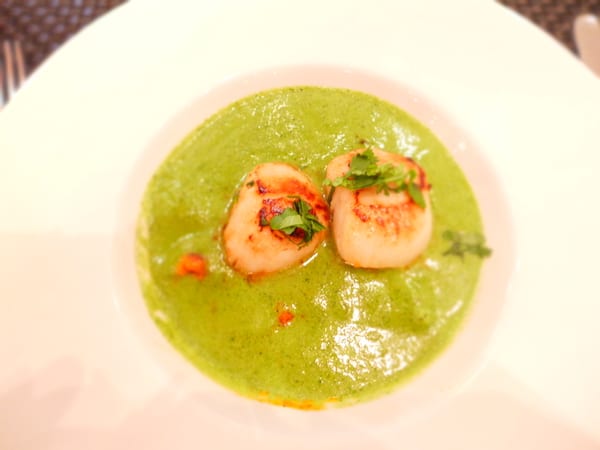 Scallops and Mussels in a Nilghiri Sauce £7.95

Two scallops and a handful of mussels in a cumin, coriander and onion sauce.  The grilled scallops had a tender interior and the plump mussels soaked up the flavours of the coriander.  Served with a roti for dipping into the fragrant sauce. This was sublime. 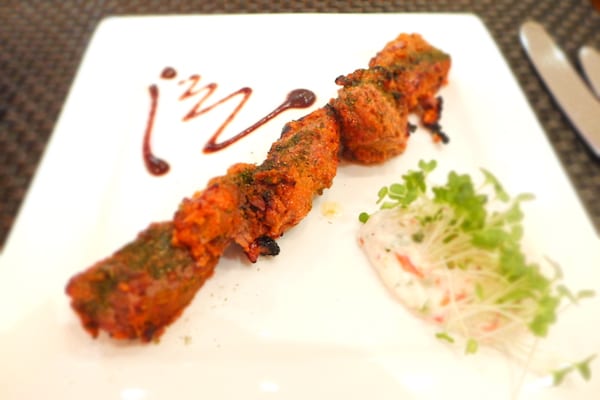 De-skewered venison marinated in honey and pineapple but Mr Foodie could taste neither. The waiter explained that the pineapple is used to keep the meat tender rather than flavour it, like how you would have it on a gammon steak. There was some sweetness but the taste was mostly spicy grilled meat, which was a bit dry but it came with a cleansing mix of yogurt and bell pepper on the side. 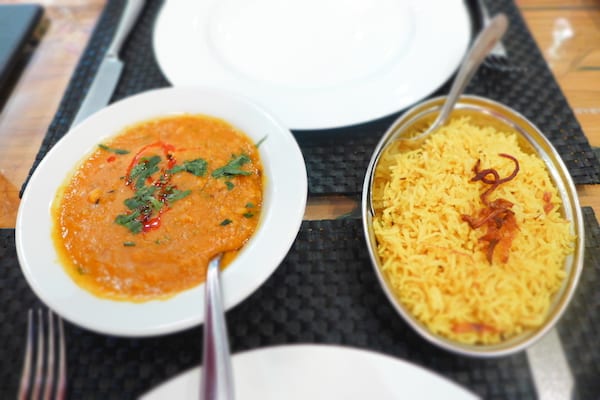 Yellow lentils with ginger, garlic, onion and chilli in the dhal, topped with fresh coriander. Quite spicy and really good, this is the first time we've had a lentil dish for ages and it reminded us both just how good a dhal can be. The pilau rice had saffron and cumin mixed in with it making it nicely flavoured. 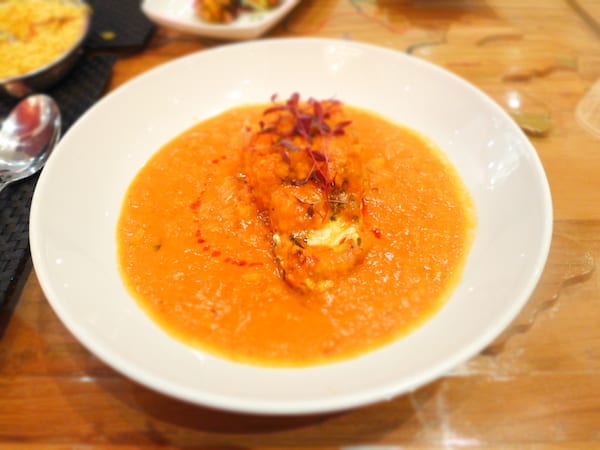 Hake served on a courgette base with a tamarind sauce £13.95

This was a big chunk of fluffy, meaty fish in a warming aromatic sauce with sliced courgette underneath, which is something else that doesn't appear on the menus of Indian restaurants all that often! A big portion and really tasty, we rued not ordering a naan to soak up all the sauce, however we did order a roti (£2.50). 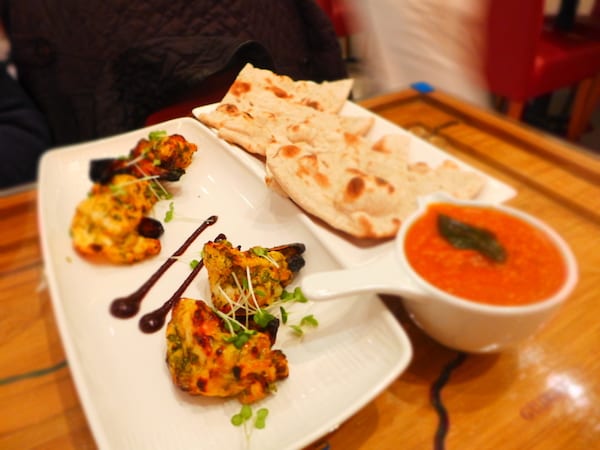 Big prawns in a light tomato-based sauce which also seemed to have a subtle mango flavour.  The prawns were perfectly juicy. It may not look like much on the plate but when combined with the lentils, pilau rice and roti, this was a very filling main. 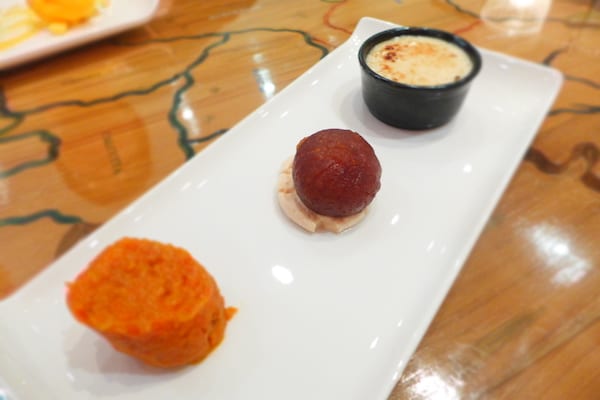 All the desserts are western-style with the exception of this one: chilled rice pudding with creme brûlée-style top, carrot halwa and caramelised yogurt with a single sweet sticky Gulab Jamin. We loved all three! 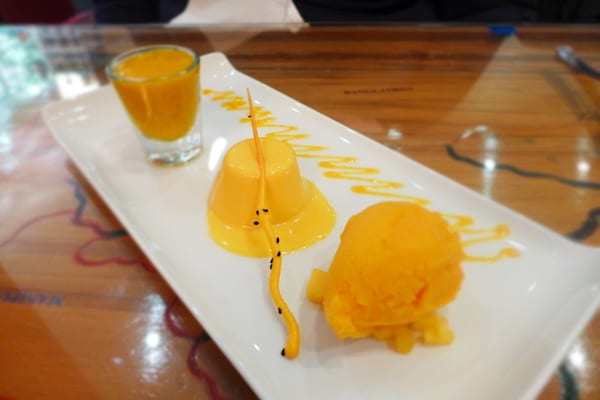 Why have mango one way when you can have it three ways!? Like the previous dessert this one allows you to try three different mini-puddings. Mango panna cotta, a "shot" of mango and Mango Sorbet  - a perfect palate cleanser after all the spices.

We had a chat with the manager after our meal and found out that there's absolutely nothing deep-fried on the menu so no pakora. Instead, the starters and mains are cooked on a hot plate grill and they are also dairy-free, sugar-free and gluten-free with the exception of the naans and roti of course.

We had a lovely relaxing evening at Mumbai Mansion. The music was chilled-out Buddha Bar/Cafe Del Mar-esque electronica and served was good throughout. Total cost was £79.95 so perhaps a little pricey but with everything being made fresh, this is to be expected for such a standard of food and should be looked upon as a good thing. We were also both stuffed and could have got by with ordering less. Takeaway is also available and pakora is listed on this menu.

Both male and female toilets were clean.

We dined as guests of The Mumbai Mansion.  Fred sez paws up to an honest review.