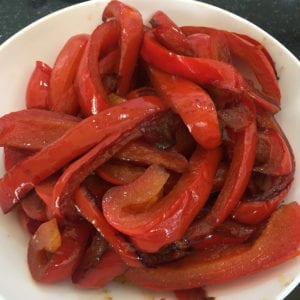 Roasted peppers are a great addition to salads, pastas and pizzas. You will find recipes telling you to char them in the oven then put them in plastic bags to sweat the skins off. You could do that, but here is a much simpler method that uses vinegar to soften the skins. It is possibly a little more traditional than using plastic bags 🙂

First the peppers. Green, yellow and red peppers are all the same thing at different stages of ripeness. The red ones are the ripest and sweetest while the green ones are more bitter, but great in Asian dishes. For this recipe use red peppers.

Peppers grown in hothouses tend to be thin fleshed and tasteless (that goes for pointed ones as well) so try and get fleshy peppers grown in a Southern Europe. The ones sold in Aldi and Lidl are usually ok. 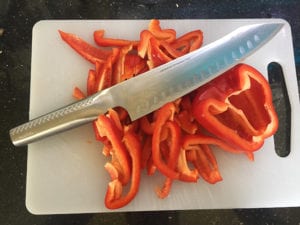