This sounds like it may be the best meal ever.  Enjoy a four-course meal created and cooked by some of Scotland’s most exciting young talent.  A collection of City of Glasgow College superstar chefs who’ve gone on and accomplished great things.

Dishes for the menu will be from the winner of BBC’s Crème de la Crème to a pioneer of the very first series of MasterChef: The Professionals.

The line- up for the evening is:

Starter - Murray McDavid
Murray was an exceptional student who was part of the college culinary team which won the prestigious Nestle Toque d'Or, one of the most sought after college prizes in the UK. After graduating, he accepted a position in Melbourne, Australia to expand his knowledge of food from around the world. He also worked in Mumbai, India and in a fine dining restaurant in Queens Town, New Zealand. Since returning to Scotland in 2017, he has been working as Sous Chef at GG's Yard in Dumfries and Galloway, a newly built wedding venue that focuses on using locally sourced produce in one of Scotland's most beautiful locations.

Fish course - Mark Heirs
While studying at the college Mark worked in one of the city’s most prestigious hotels, One Devonshire Gardens. Like many young chefs, he aspired to work at the highest level so he moved to Bray to work in the 3 Michelin star Fat Duck, at that time voted the number one restaurant in the world. Since then Mark has gone on to appear on the first series of BBC’s MasterChef: The Professionals and held several head chef positions, owned his own restaurant and even spent time teaching in a well-known cookery school. He is now working as an international private chef cooking in stunning locations for some very famous names. He is a regular on STV2’s live topical weekday program ‘Live at Five’ and takes part in food festivals across the UK. He is a master craftsman of the Craft Guild of Chefs and an ambassador for Springboard UK.

Main course - Nikola PIhakova
Nikola was part of the team which won the Nestle Toque d'Or, one of the most sought after college prizes in the UK. Nikola held a full-time job at the Hilton Glasgow whilst studying at the College and, after graduating, she went to work as a Chef de Partie in one of the leading hotels in Dubai - the Sheraton Grand. After a couple of months, she returned to Scotland to work at the Sheraton Grand Hotel in Edinburgh. Nikola is currently Sous Chef at Prestige Scotland where she is responsible for food at private events across Scotland. She also works on menu design and client tasting sessions and supports major sporting events such as the British Open. Nikola recently became the Sodexo Scottish Chef of the Year. 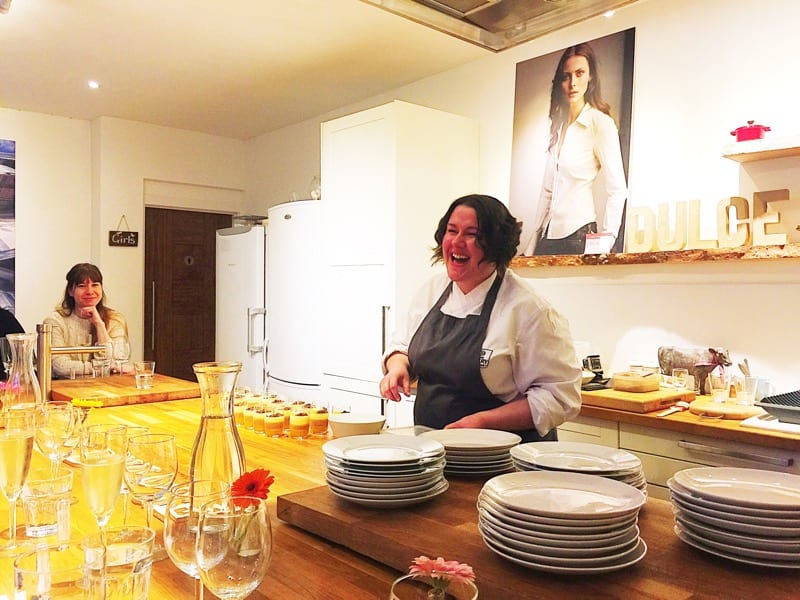 Dessert - Helen Vass
Helen is an award-winning pastry chef based in Glasgow and runs her own bespoke patisserie and consultancy business, Dulce. Helen was the winner of the Callebaut Patisserie Chef of the Year 2017 award at the CIS Excellence awards. Helen has worked with some of the best pastry chefs and restaurants in the business in Spain and the UK. Most recently, she worked with Claire Clark MBE at her bespoke patisserie business in London, Pretty Sweet, producing high-end patisserie for clients such as Fortnum and Mason and Selfridges. Previous to that, Helen collaborated with the Award winning restaurant, The Three Chimneys, on the Isle of Skye. In May 2016, Helen was part of the winning team on BBC’s Bake Off Crème de la Crème hosted by Tom Kerridge.