Visiting Niagara Falls is on the bucket list for many people, including us until recently, and while most people would prefer to visit in summer I'm sure, you do get a different experience in winter as you'll see below.

Here you’ll find tips to help you decide how to get there and what to do as there's more to the city than just waterfalls.  We visited on a day trip from Toronto to the Canadian city of Niagara Falls, not to be confused with the town with the same name on the other side of the border, and we have heard that the Canadian side is much better for tourists.

It was cold and icy when we made the journey, so double-check the weather forecast and transportation companies’ advice before you go as there can be delays getting to and from here in winter. 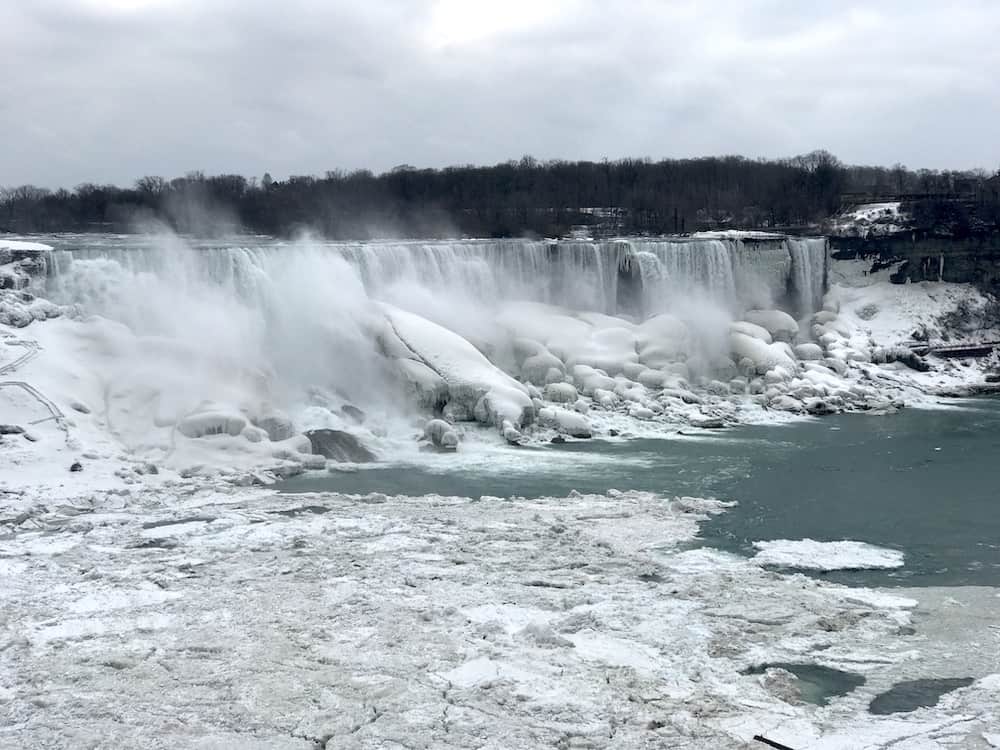 But don't be dissuaded if you think the weather will dampen the experience - here's what to expect, an otherworldly experience of the great falls and yes it's cold but there's also no crowds so you can get plenty of photos without jostling for space. Check out all that ice - a true winter wonderland! 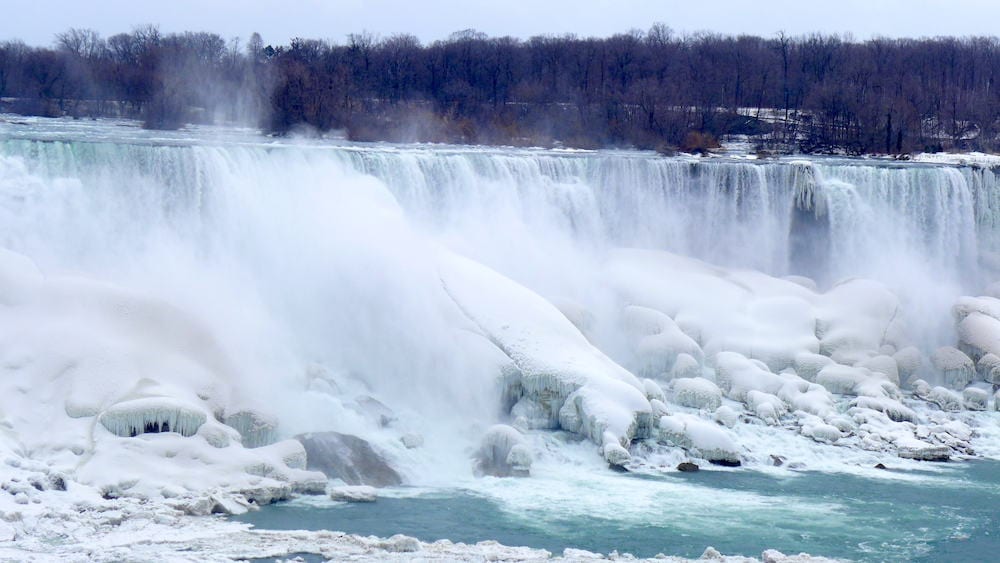 What is Niagara Falls?

This may seem like a silly point but Niagara Falls is a group of three waterfalls at the southern end of Niagara Gorge.  It spans the border between the US state of New York and the Canadian province of Ontario. The largest of the three is Horseshoe Falls.  This waterfall is on the border between Canada and the United States. The smaller American Falls and Bridal Veil Falls lie entirely within the United States.

Where is Niagara Falls?

By road, it's 128 km (80 miles) from downtown Toronto according to Google Maps so you can expect to drive it in 1.5 hours in good weather conditions.

How to get there

Trains depart from Toronto’s Union Station all year round.  The round-trip ticket includes GO Train to Niagara as well as two-day access to WEGO, the hop-on, hop-off bus service that travels throughout the city of Niagara Falls and Niagara Parks.

Just order online, present your ticket (printed or on your mobile device) and discover.

Greyhound and Megabus have buses direct from Toronto (Bus Terminal at 620 Bay Street) to the Niagara Falls Bus Terminal daily. Check the timetables as some are scheduled to take 1 hour 35 while others are timetabled for 2 hours 15 minutes.

We booked in advance using the Megabus website. If you have any issues booking online there are ticket desks at Toronto Coach Terminal, pictured below. 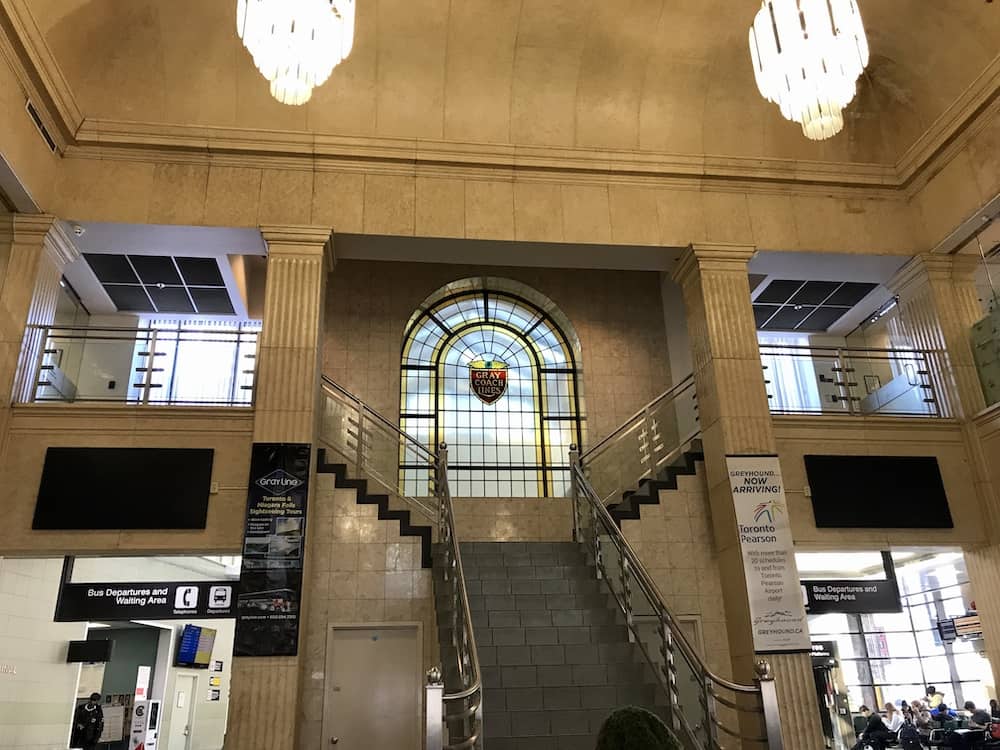 The Megabus arrives at the Niagara Falls Bus Terminal, which is not in the centre, so from here you can use the hop-on WEGO bus service. Taxis and Uber are available as well. Or if you want to be healthy and take in your surroundings you can walk like we did.  We're hardy Scots who are used to this sort of weather - we've even been camping in -12 temperatures before so no biggie (proof here!). 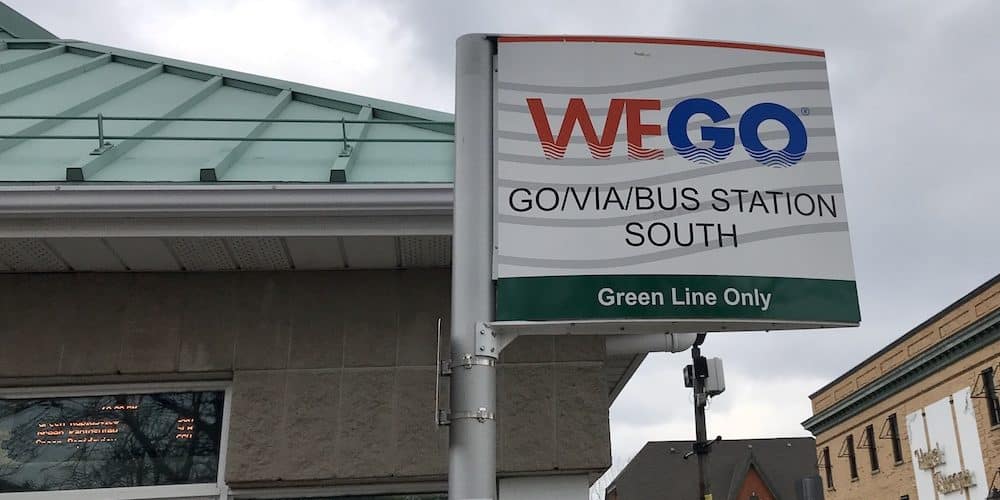 If you decide to take the bus here's the route map. 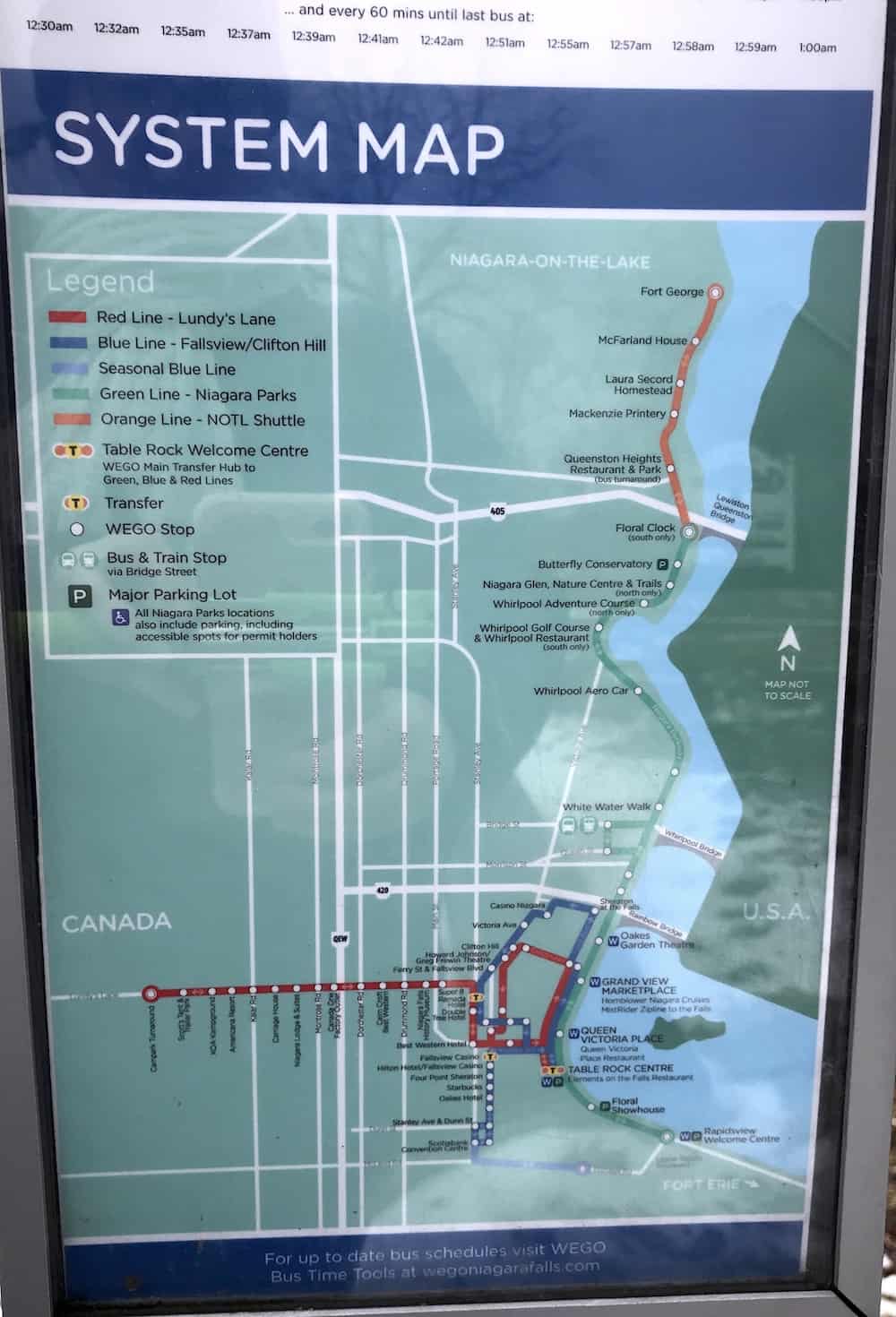 We wandered about with absolutely no plan, we were just happy to be there but here are...

5 things to do on a trip to Niagara Falls

The Rainbow Bridge connects Canada with the United States of America. It replaces the Honeymoon Bridge which collapsed.  The bridge was built in 1941 and the origin of the name is unknown. To cross the bridge costs $1 for pedestrians and those on bicycles.  The border crosses the river so you can be in two countries at once! 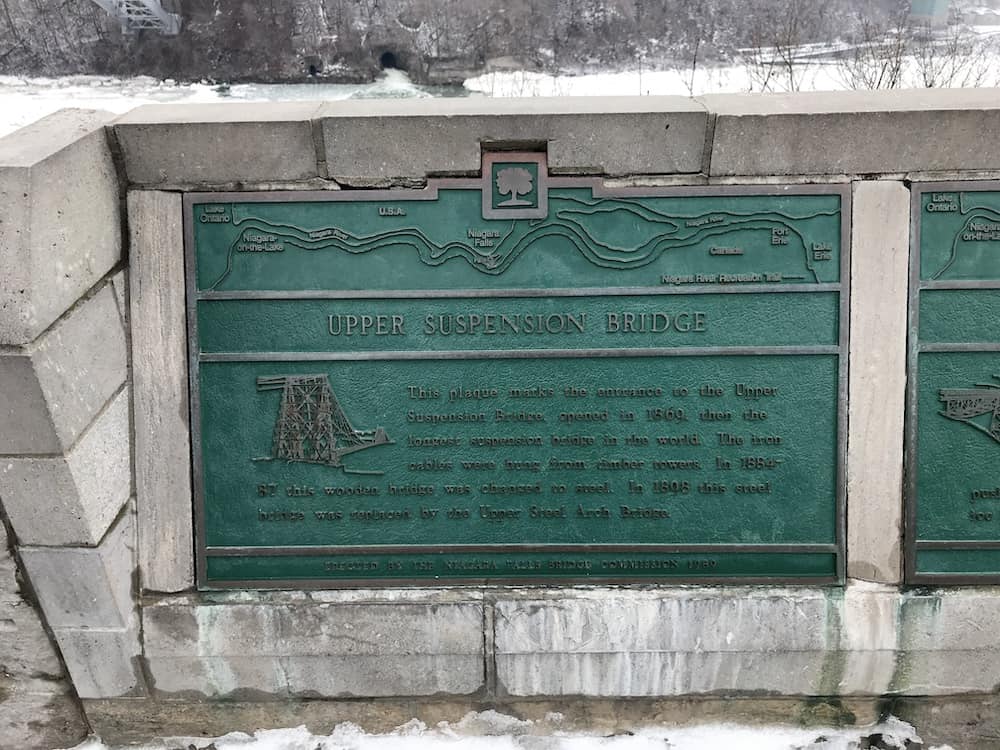 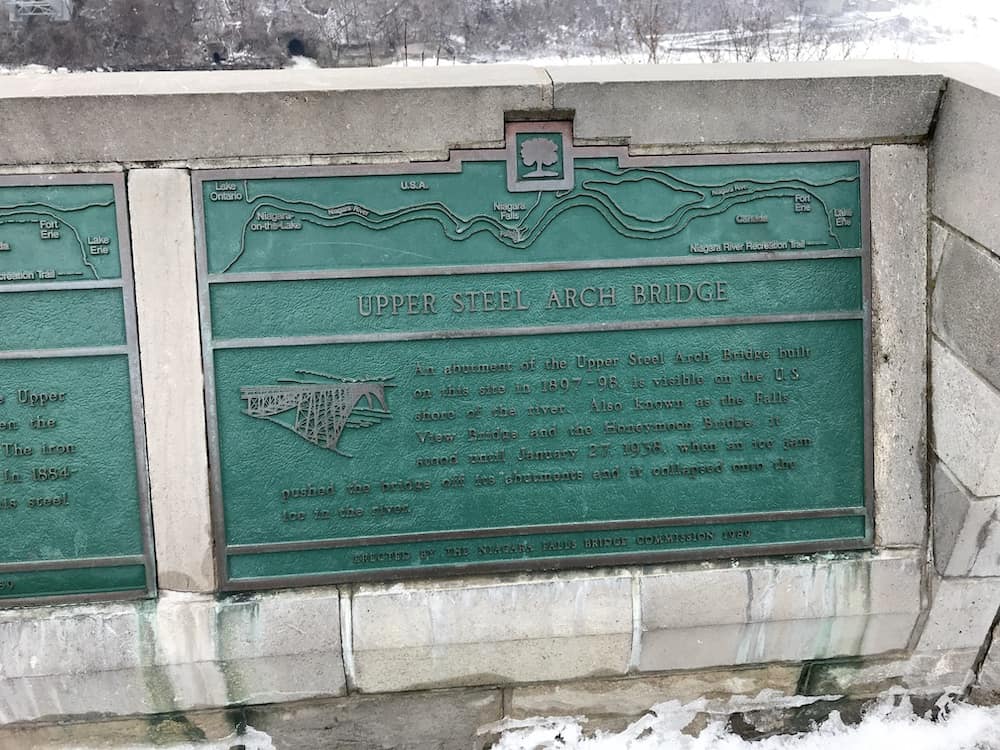 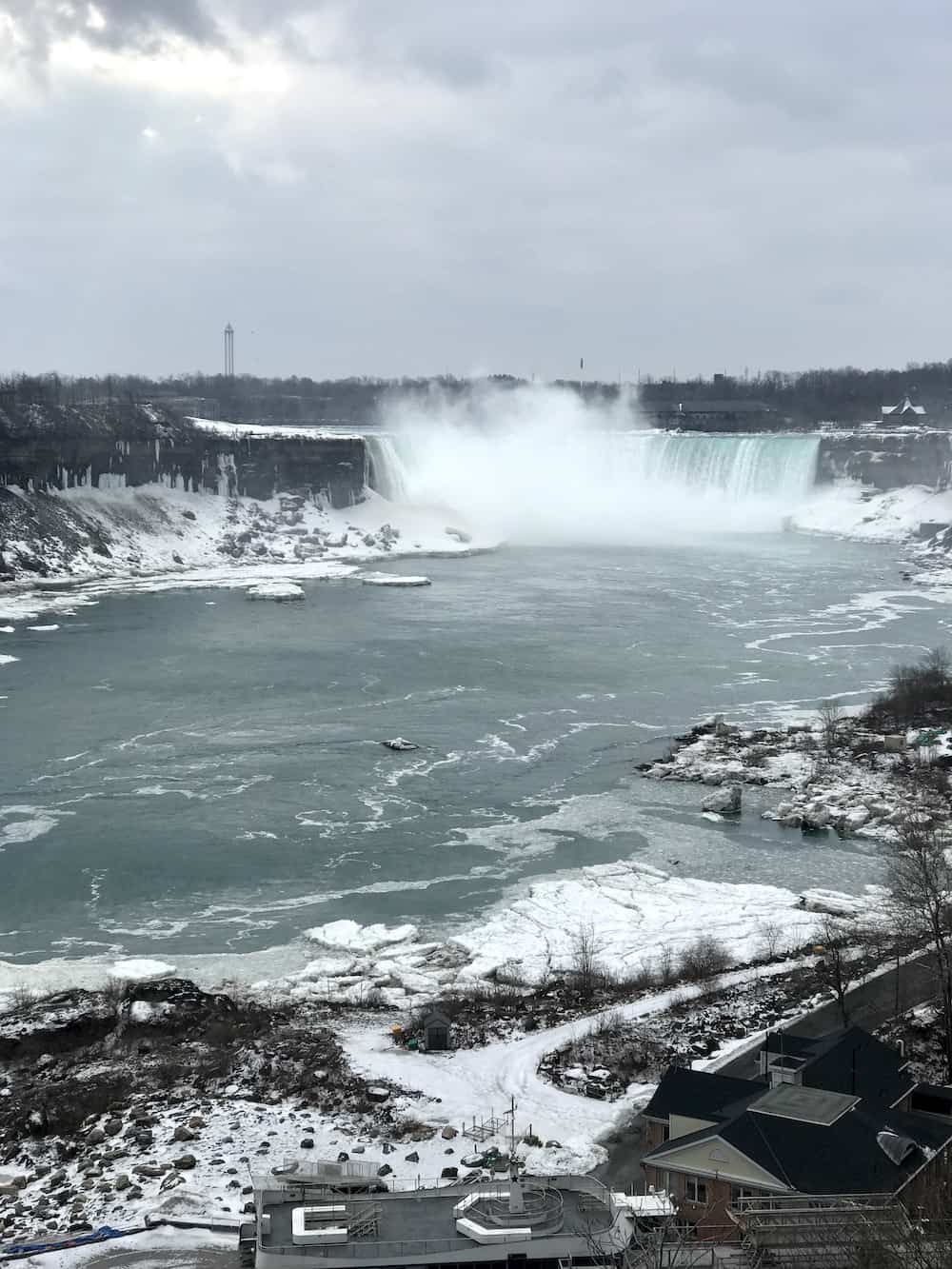 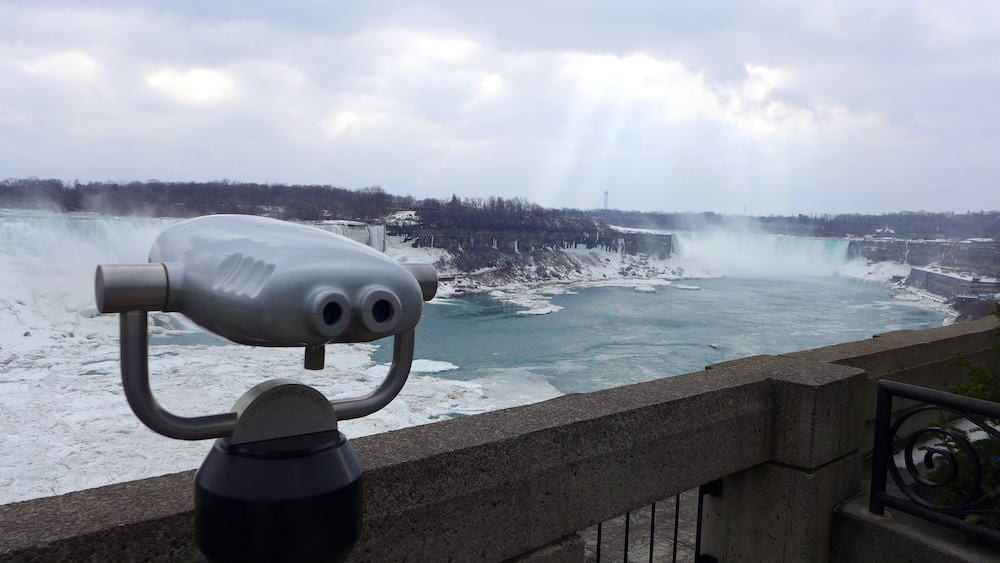 Clifton Hill is where to go for entertainment.  Here you will find hotels, restaurants, gift shops, wax museums, haunted houses, arcades and the like for children and the family. Attractions include the Ripley's Believe It or Not! Museum and 4D Moving Theater, the Guinness World Records Museum, the Niagara SkyWheel Ferris wheel, and the nearby Louis Tussaud's Waxworks (which also operates under Ripley's). 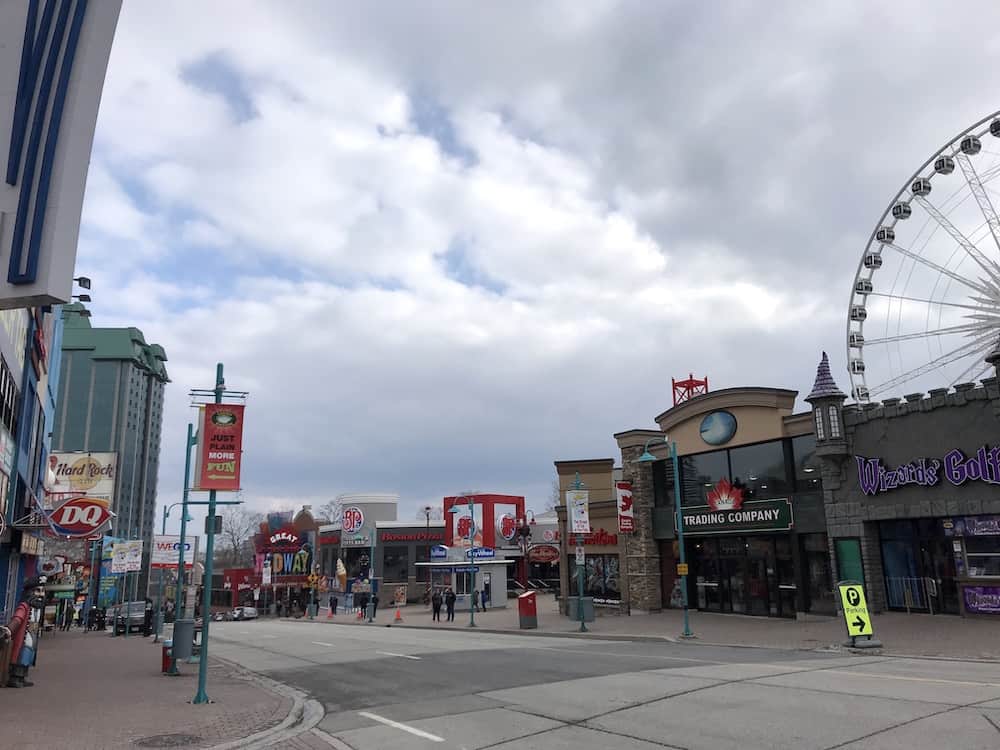 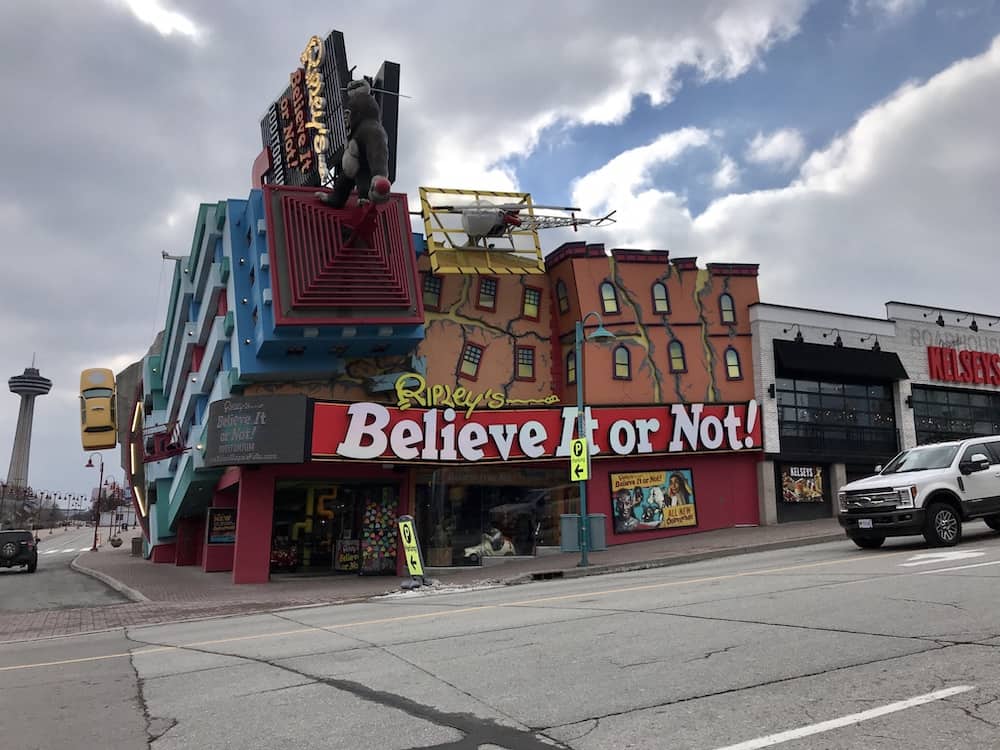 Being foodies and er, drinkers, we stopped off at Niagara Brewing Company for a refreshment break of local beer and tasty bar food. We had a beer flight and took home a bottle of ice wine beer, which was pretty unusual. 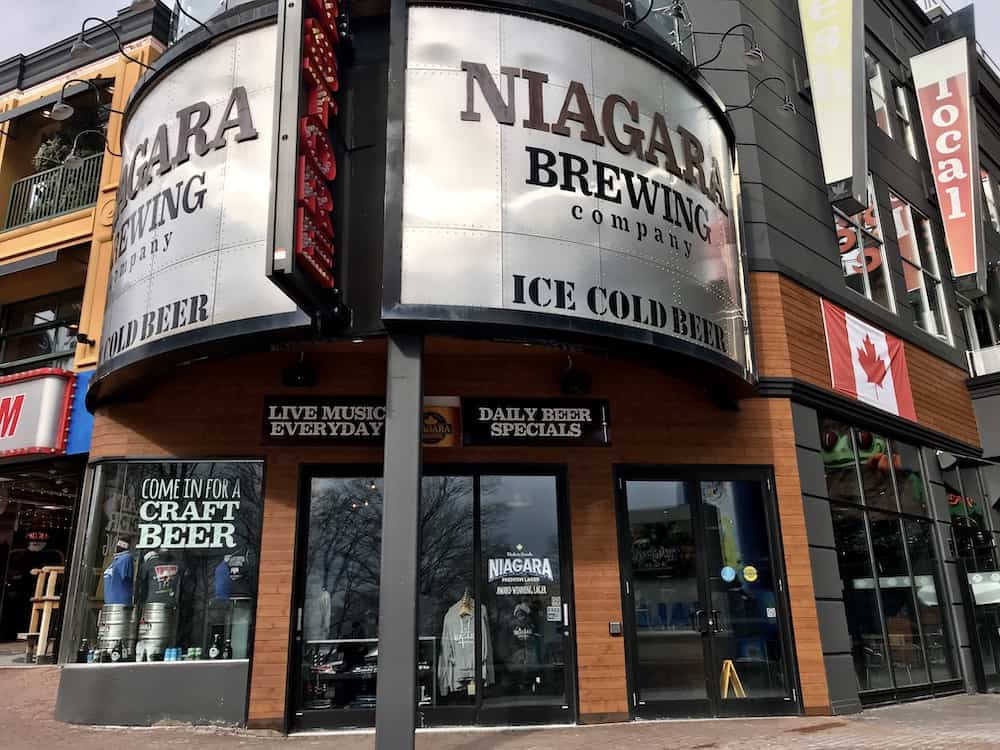 This area was long part of the Iroquois territory, native American who lived mostly along the southern edge of the Great Lakes. European settlement has been here since the 17th century with Louis Hennepin, a French priest and missionary, is regarded as the first European to visit the area.  Increased settlement in this area took place during and after the American Revolutionary War when the British Crown made land grants to Loyalists to help them resettle in Upper Canada and provide some compensation for their losses after the United States became independent.  In 1791 John Graves Simcoe renamed the town Stamford after Stamford in England.

In 1856, the Town of Clifton was incorporated. The name of the town was changed to Niagara Falls in 1881 and nowadays it's a city of nearly 90,000 people but it was eerily quiet when we visited. 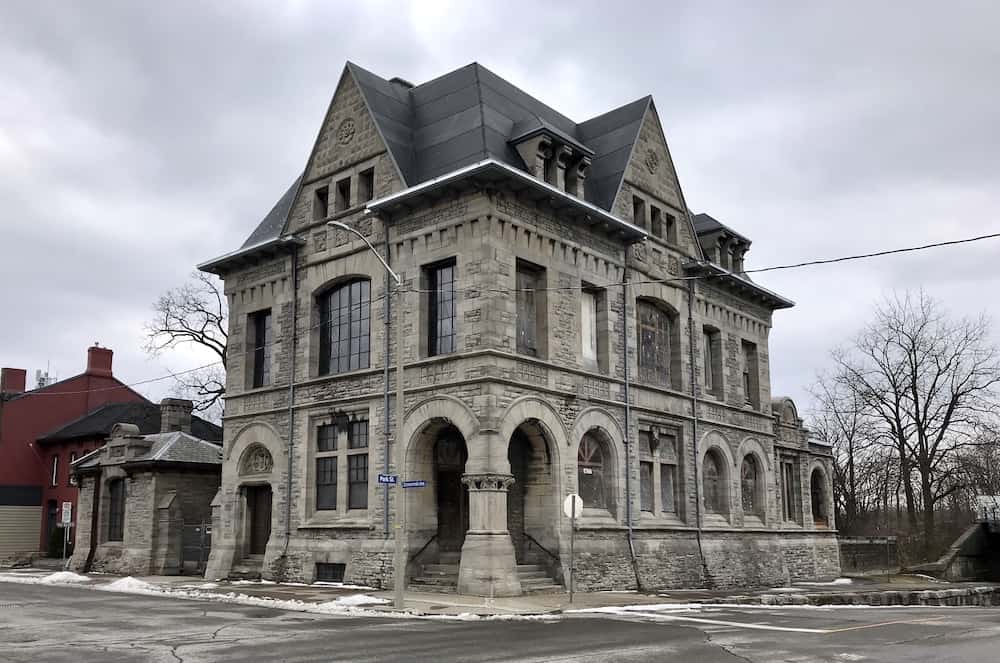 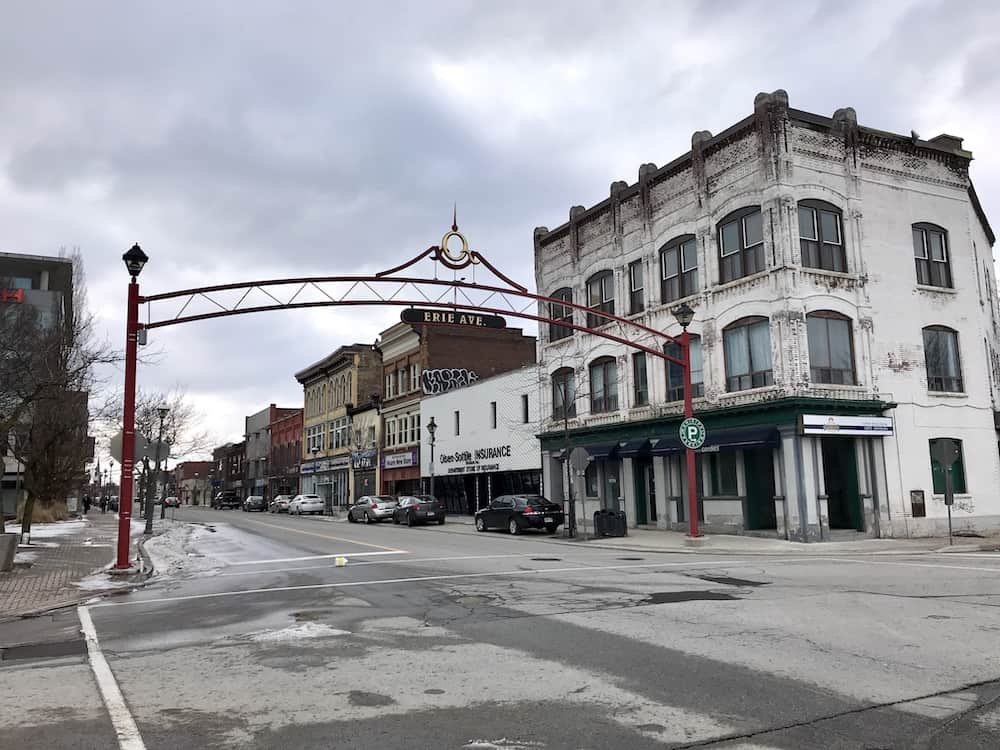 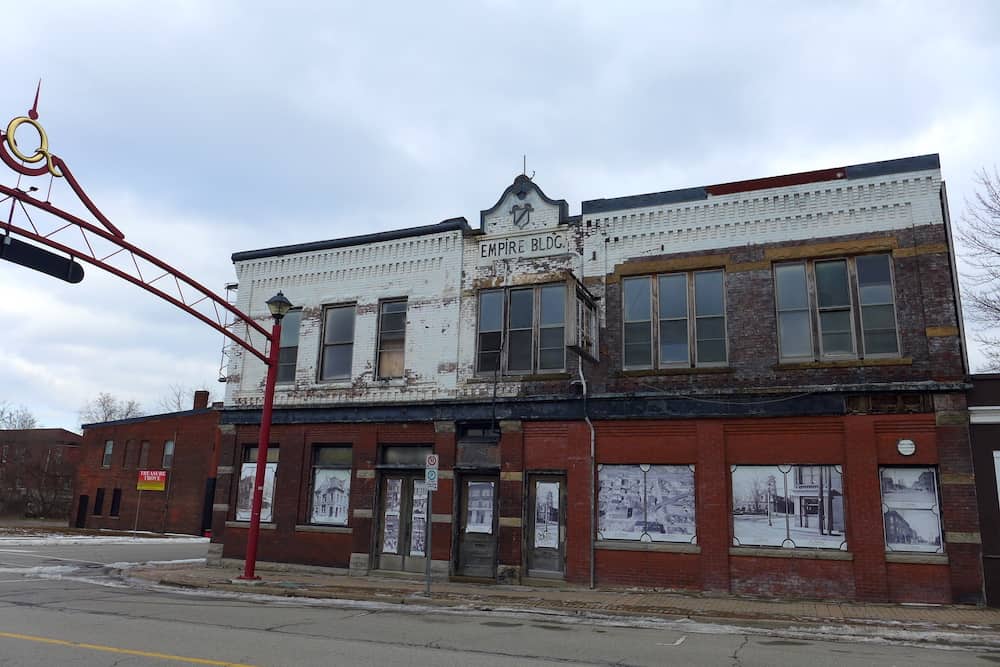 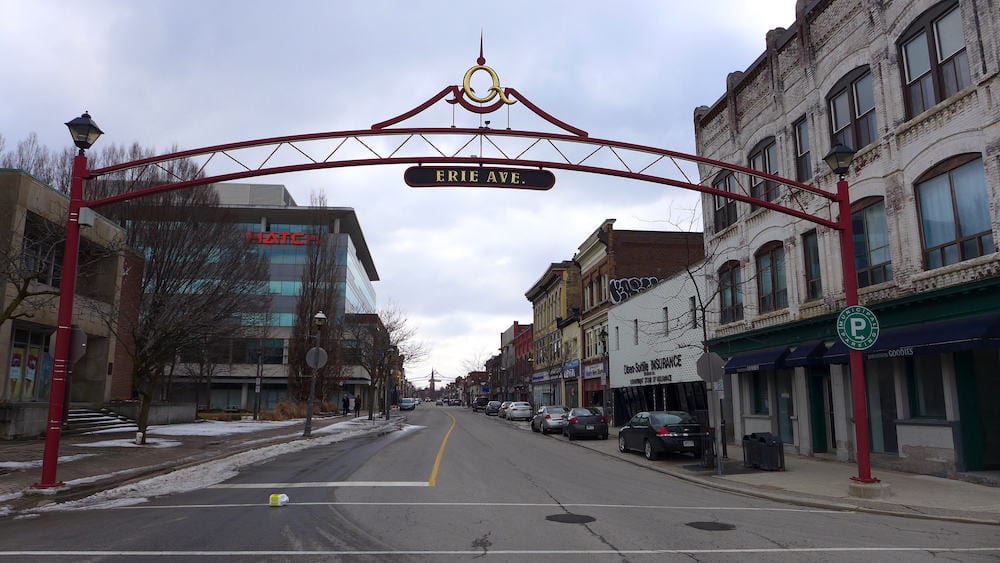 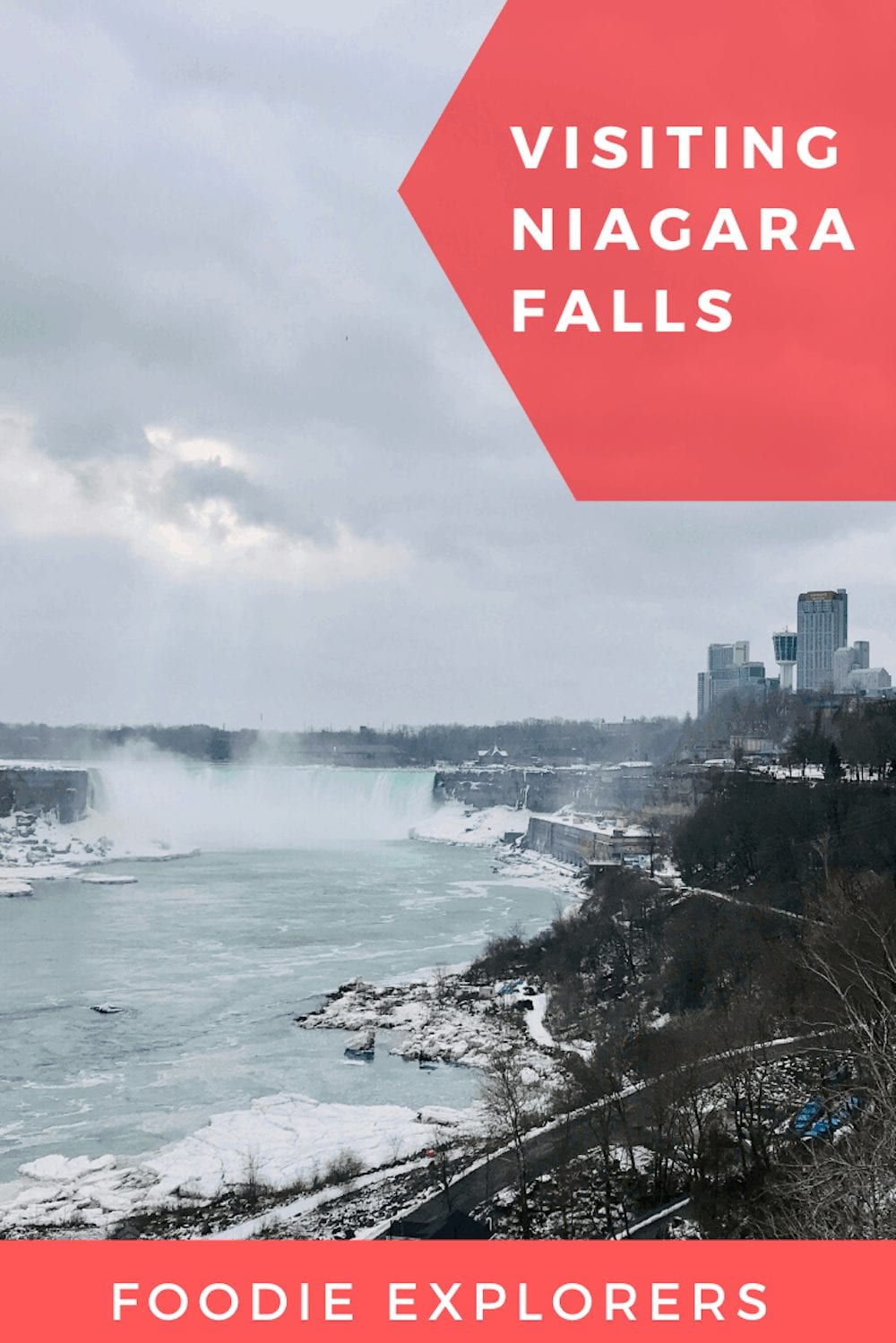 Have you been to the CN Tower in Toronto? Click here to find out what you can expect 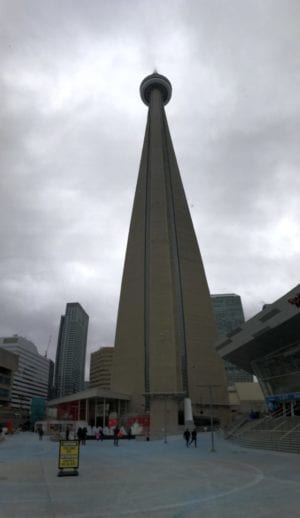 « What is Coronavirus and what are the symptoms?
Product Review: Zero Water Filter »