Where was The Queen's Gambit filmed?

Netflix has grabbed audiences with The Queen's Gambit, which is an adaptation of Walter Tevis's 1983 novel of the same name. The series revolves around chess prodigy Beth Harmon and her life from childhood as an orphan learning chess through her rise in the world of chess. Although set in Lexington, Kentucky, most of the series was actually filmed in Berlin, as well as Ontario.

Here are some of the spots in Berlin that were used as a film location for The Queen's Gambit.  Many thanks to Netflix for use of the production stills.

Map showing the filming locations for The Queen's Gambit

The first scenes are set in 1967 Paris, however, they are filmed at Haus Cumberland on Kurfürstendamm in Berlin-Wilmersdorf. The now-closed luxurious Café Grosz on the ground floor was once part of a Grand Hotel. 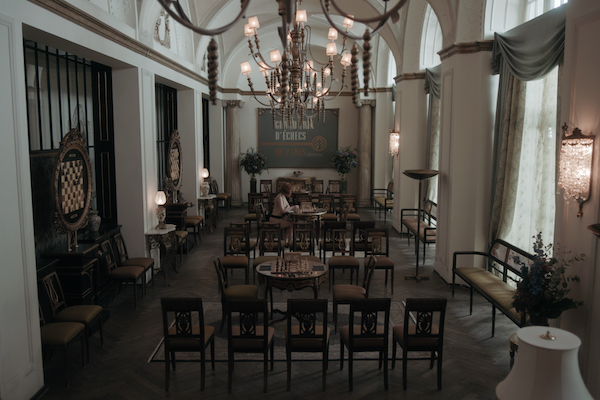 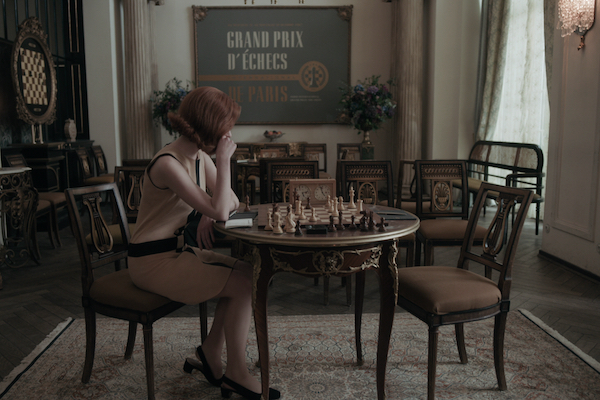 The Methuen Home orphanage for girls is a castle located in the outskirts of Berlin called Schloss Schulzendorf.

The interior of the store is the Humana secondhand and vintage shop at 3 Frankfurter Tor in Berlin. 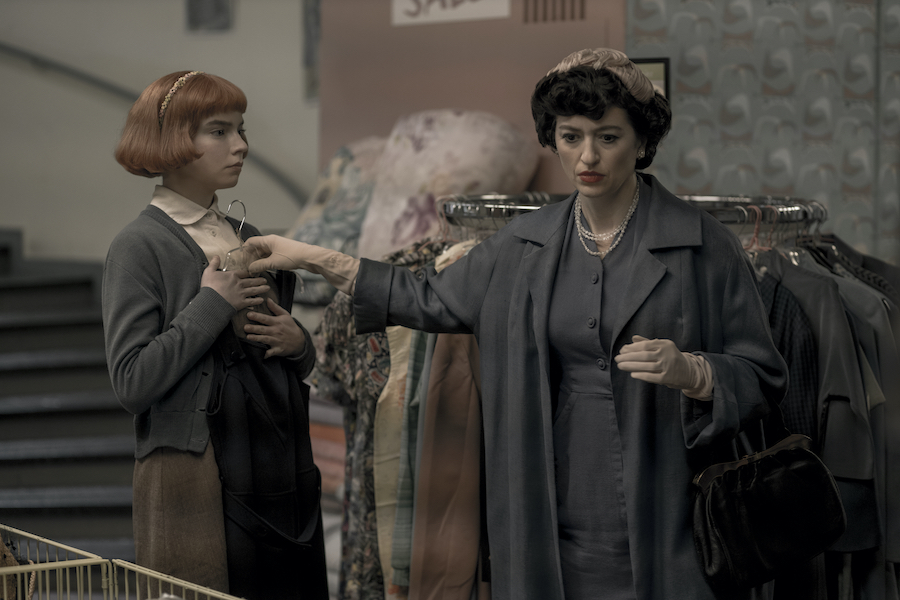 Max Taut Schule in Rummelsburg (Berlin). This school was once Germany’s largest school.

The hotel lobby is the Rathaus Spandau, the town hall of the Spandau district in Berlin. 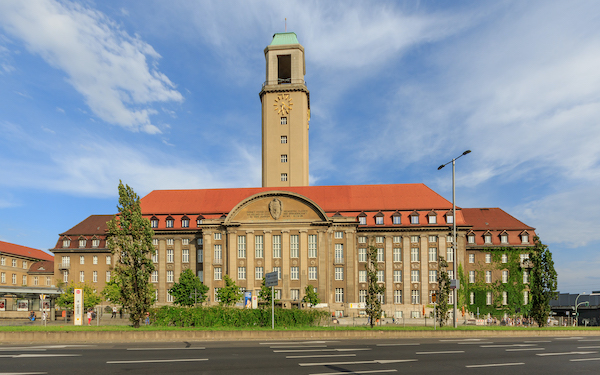 The room with the wood-panelled ceiling was filmed in Berlin's Meistersaal. This 1910 historic concert hall near Potsdamer Platz is a venue for events and private parties today. From 1976 to 1991 the Meistersaal was transformed into the Hansa recording studio headquarters, used by top artists like David Bowie and U2. 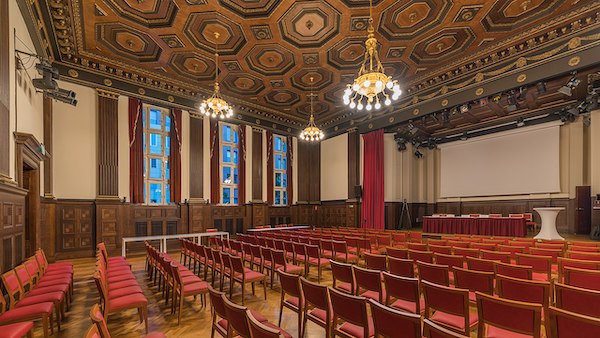 The US Open held in the Hotel Mariposa in Las Vegas is the Palais am Funkturm building of Messe Berlin.

Designed by Bruno Grimmek, the Palais am Funkturm was built in 1956/57.  It has a retractable staircase, partitions, and a chandelier adjustable for height and Berlin’s largest ballroom.

Located in the Charlottenburg-Wilmersdorf district of the city, The entrance was modified digitally adding palm trees and a new building. 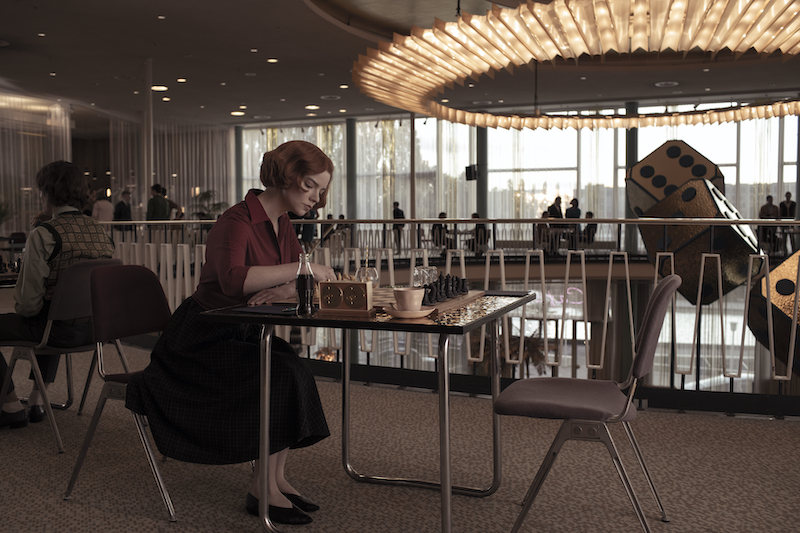 The Aztec Palace Hotel was filmed in the foyer of the Friedrichstadt-Palast in Mitte. The original 1919 building was destroyed in the 1980s by the German Democratic Republic, however, in 1984 the new Friedrichstadt-Palast opened. Its concrete architecture retains basic ideas of the old interior vestibule but has a new contemporary façade.

The scenes in the Mexican zoo were also filmed in the Berlin Zoological Garden. 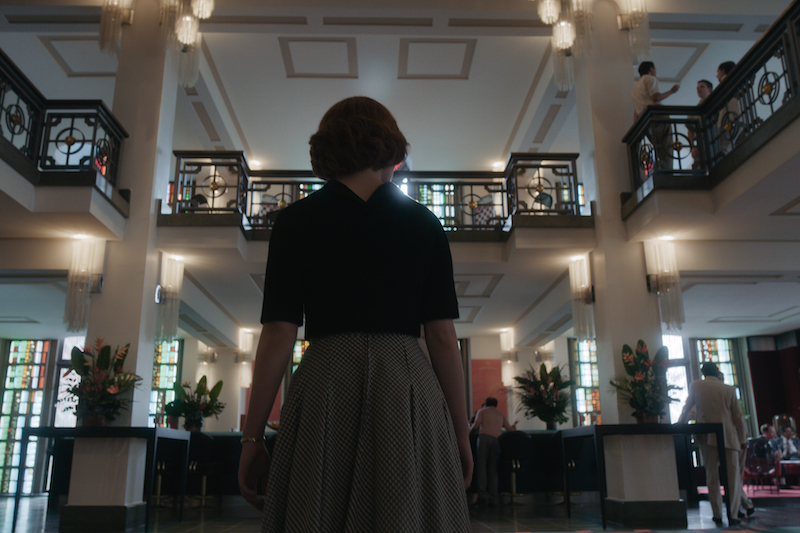 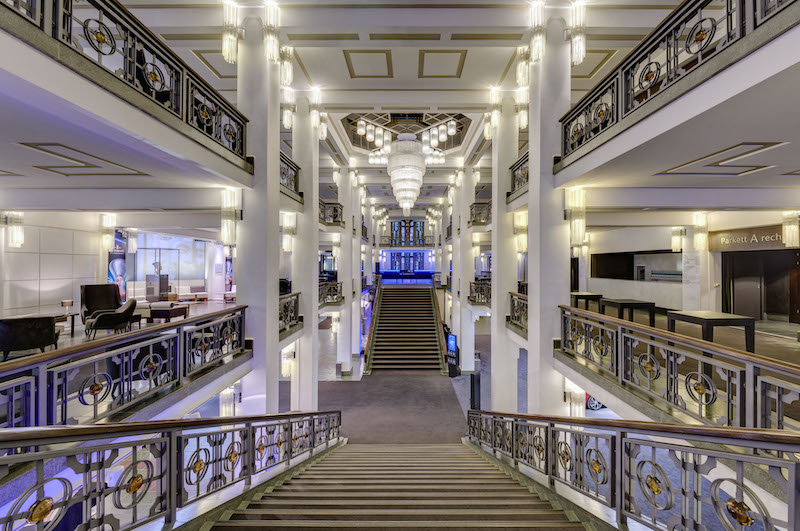 The interior hall is the Protestant University of Applied Sciences Berlin in Zehlendorf (Evangelische Hochschule Berlin). 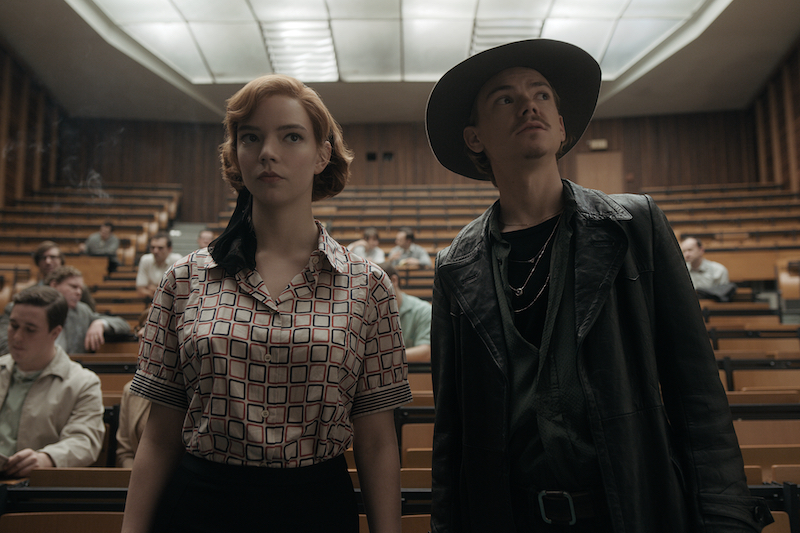 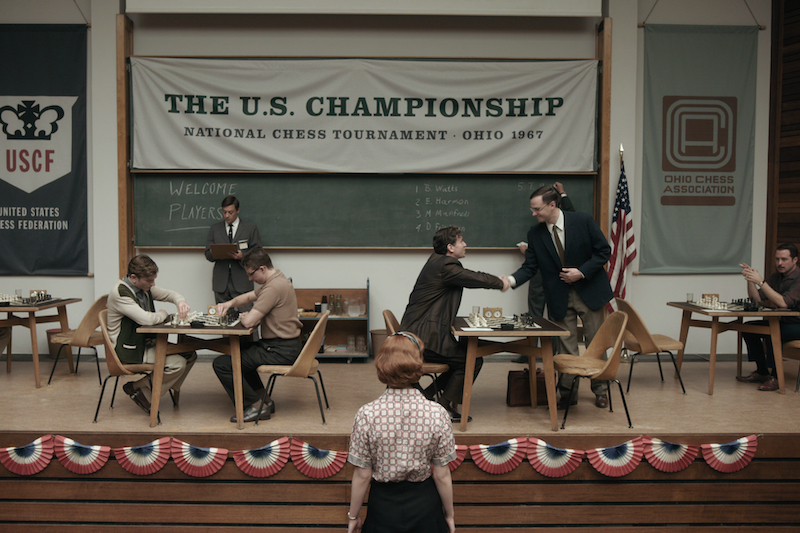 Scenes of 1967 Paris were filmed in the Bode Museum on Museum Island. 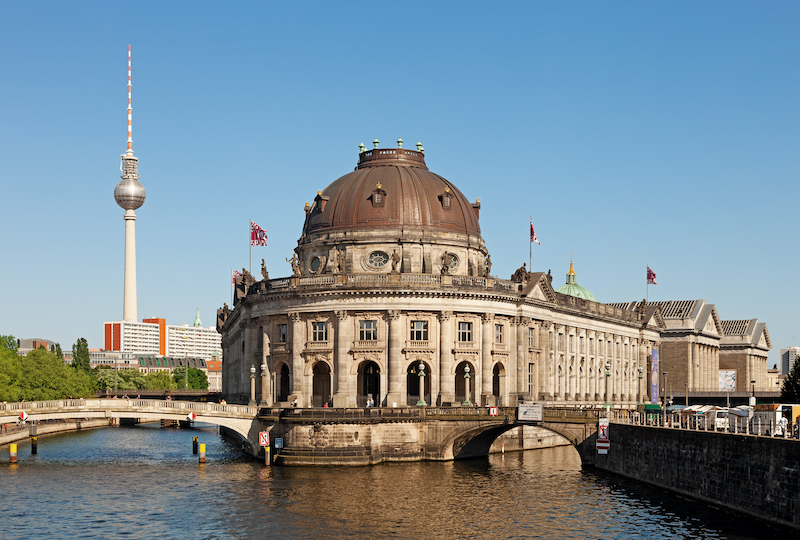 The scenes of the tournament in Moscow were filmed in the Bear Hall of the Old City Hall of Berlin (Der Bärensaal im Alten Stadthaus), not to be confused with the nearby Rotes Rathaus. 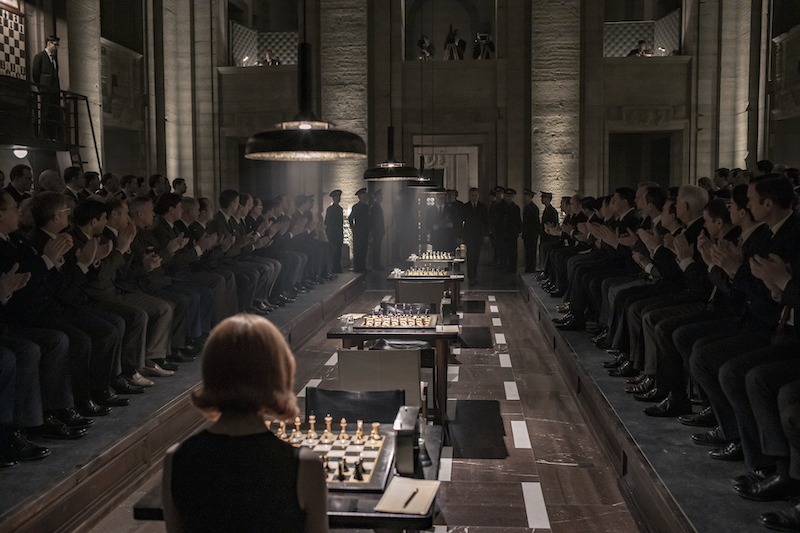 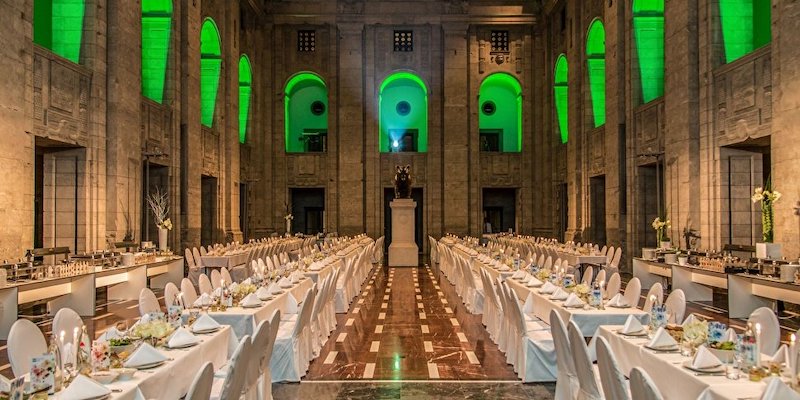 The Moscow hotel is the facade from a Stalinist era apartment block on Karl-Marx-Allee (Friedrichshain).  Google Maps

The restaurant of the hotel in Moscow is the Panorama Bar of Kino International, which can similarly be found on Karl-Marx-Allee.

Playing chess in the street

The final scene with Beth walking in the streets of Moscow, meeting chess-players, was shot at Rosengarten Square, also located on Karl-Marx-Allee.

Click here for a recipe for a Gibson cocktail as seen in The Queens Gambit. 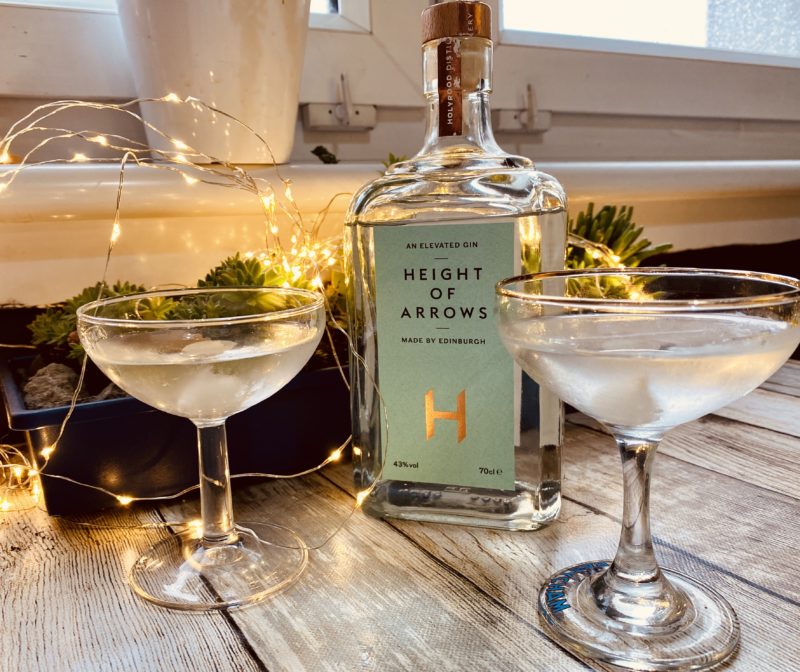 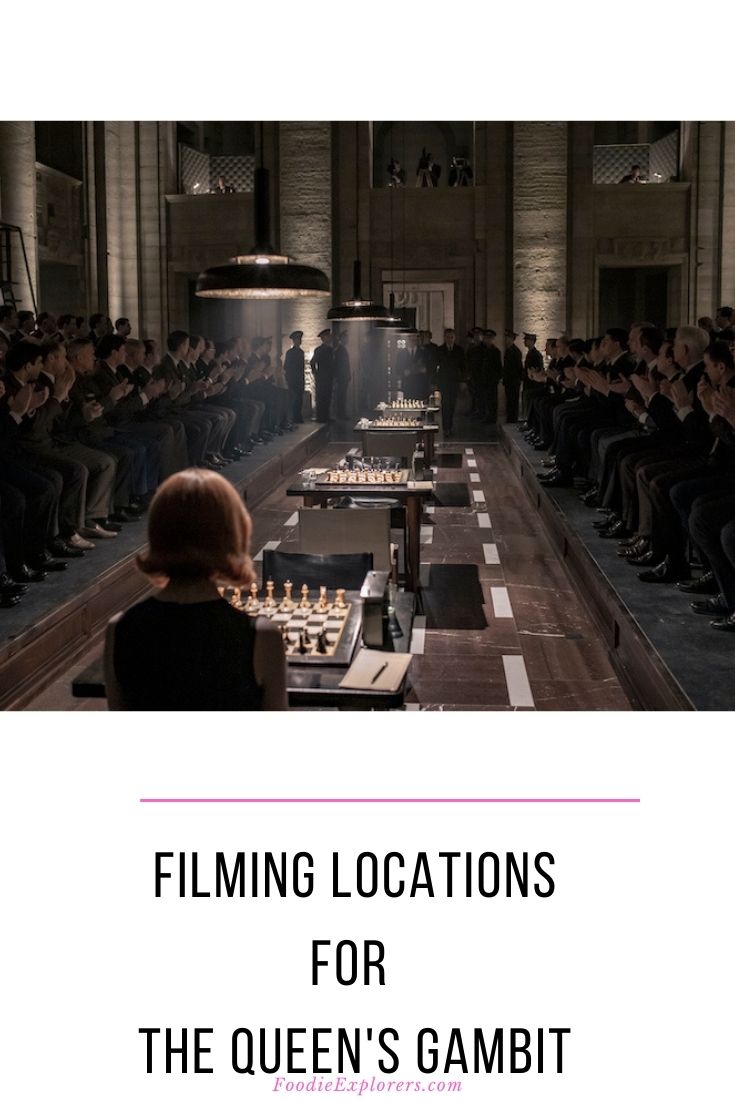