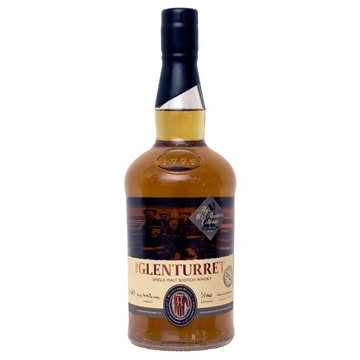 Glenturret Distillery have launched  its latest limited edition malt whisky, which has been made available for pre-order , celebrating a unique ‘tail' in the brand's 240 year heritage… of 16 men and a dog.

A photo, unearthed from the back of a cupboard at Scotland's oldest working whisky distillery earlier this year, dating from 1905 and featuring 16 stillmen, along with a collie dog believed to be the distillery manager's dog at the time, has provided the inspiration for the bottling and the iconic image will also take pride of place on Fly's 16 Masters Edition label.

The 16 stillmen formed the backbone to Glenturret Distillery and the dog, Fly, belonged to the distillery manager who lived in a house on the distillery premises in Crieff, Perthshire.

With a taste of fruit and mocha coffee and a sun-kissed appearance, Fly's 16 Masters is the latest in a line of highly collectible whisky releases from the 240-year-old Glenturret brand. With interest high in the brand and Whisky Month in full swing throughout this month, the latest bottling is expected to be snapped up quickly by whisky collectors. Other recent bottlings, such as the The James Fairlie Edition, commemorating the man who re-established Glenturret Distillery as an operational producer in the 1950s, and The Brock Malloy, two stillmen who worked at the distillery in the 1980s, have sold out. In the case of The James Fairlie Edition, the Scotch sold out in a matter of hours.

Stuart Cassells, the driving force behind Glenturret Distillery's return to the limelight which has included the establishment of the brand's core range of three malts as well as the series of popular limited edition releases, commented:

"1905 was a momentous year. Albert Einstein first set out his theory of relativity and Arthur Conan Dolyle first published The Return of Sherlock Holmes. The same year, we saw a London magistrate's court saying that whisky ‘should consist of spirit distilled in a pot still derived from malted barley - a momentous occasion for the industry.'

"Closer to home, our 16 stillmen were captured for prosperity in this photo, found by chance at the back of a cupboard and now hanging proudly on our walls at the distillery. We think Fly's 16 Masters Edition encapsulates not only the spirit of whisky but the spirit of The Glenturret's hand-made heritage. We're looking forward to seeing the bottles ‘fly' off the shelves accordingly!"