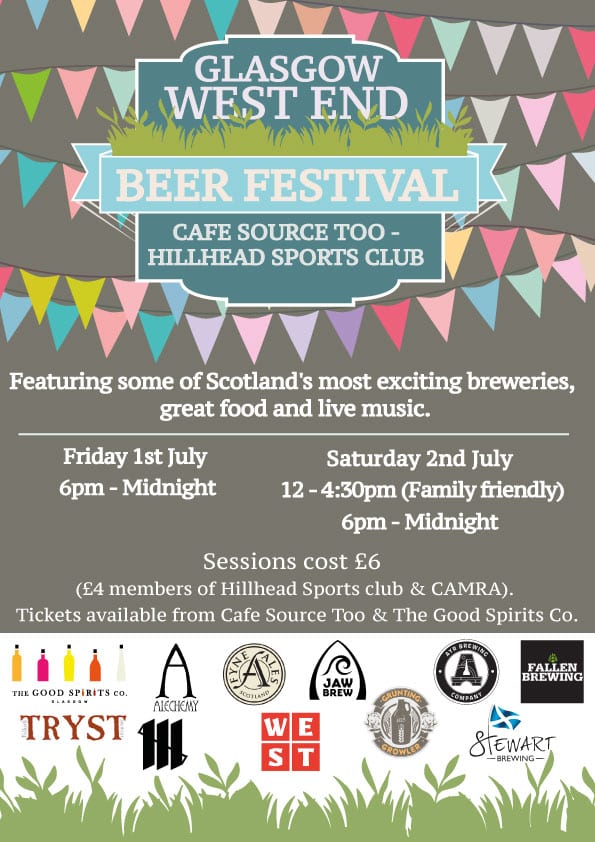 It’s that time of year again. Beer festival season is upon us. From Paisley to North Hop & Fyne Fest to GRAF there’s almost too much to cram in to your summer calendar. But make sure not to forget about us as this one is not to be missed!July 1st & 2nd this year will see the return of The West End Beer Festival at Café Source Too in Hughenden.

Launched last year out of a love for great local beer and working closely with small independent brewers and suppliers, we opened our doors to the public and were totally overwhelmed that 800 people came through our doors to drink with us.

This year we are looking to host in the region of 1200 punters over 3 sessions and two days.
The format is simple – Brewers and suppliers alike turn up, set up their own unique bars and sell their wares. You show up, grab a glass, drink and have fun. 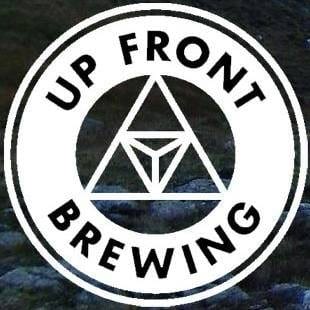 So who will be there? Many friendly faces from last year have returned. We have Fyne Ales, Alechemy, Floodline, Ayr Brewing, Tryst, Jaw Brew, Fallen Brewing and Good Spirits Co all returning for their second year.

We also have some exciting newcomers, such Jake Griffins Up Front Brewing. Up Front have been quenching our thirst since last year with Jake’s AHAB stout and ISHMAEL IPA and quirky cans are fast becoming a staple in the fridge of craft beers bars all over Glasgow.

Another new brewery joining us this year is Dead End Brew Machine. Dead end, though totally new on the scene earlier this year at Hippo Beers Great Scottish Beer Celebration managed to win beer of the Festival with their stand out DEATH ONE passion fruit IPA.

Finally we have our good friend (well everyone’s good friend – he’s basically the nicest guy in the world) Jehad Hatu of Grunting Growler will be filling cups for sups with whatever fabulous guest beers he has on offer for us.

Another newcomer this year is Glasgow’s WEST Brewery. But hold on! As tasty as they might be – don’t think Munch Red or St Mungo Lager as brewer Simon Roberts has something special up his sleeve that you will only be able to taste at The West End Beer Festival.

As ever Café Source Too will be serving up some great guest kegs, cask ales and bottles for you all to get stuck in to.

There’s certainly a lot to look out for this year. I personally cannot wait to see what all of our new friends bring to the table. I’m particularly excited to find out what Dead End Brew Machine showcase and we are all super excited to see what WEST bring along. Good Spirits Co’s Wine & Beer store will also have a very special announcement and or product to show off but that’s all I can say about that.. for now.

Café Source Too will again provide great food to accompany your brews. There will be live music in the bar are on both nights as well as a DJ set from Halfrican’s Sancho Buna in the main hall on Saturday night.

Each session is ticketed. We strongly advise that you buy a ticket as the event is likely to sell out and tickets will not be available on the door if this is the case.
Tickets cost £6 per session (includes your festival glass)
Tickets are available from The Good Spirits Co, Grunting Growler, Café Source Too, Valhallas Goat and are now available online (a small booking fee applies).
EASILY PURCHASE TICKETS NOW BUY FOLLOWING THE LINK BELOW!
https://event.bookitbee.com/7552/glasgow-west-end-beer-festival-2016/

Expect only the best in Scottish craft beer and real ale! We Hope to see you all there!
Cheers!