Home » Herculaneum – Everything you need to know

What to see in Herculaneum

Mrs Foodie has wanted to visit Herculaneum and Pompeii since she was a young'un (yes that long!). We were spending New Year in Naples (a previous New Year holiday) so with the ruins of Herculaneum being a mere 20-minute train journey away from the main station we made sure to spend 1 full day in Herculaneum and 1 full day in Pompeii. We would not recommend visiting both in a single day as Pompeii is spread out over a much larger area - we spent a full day there and still ran out of time to see everything! 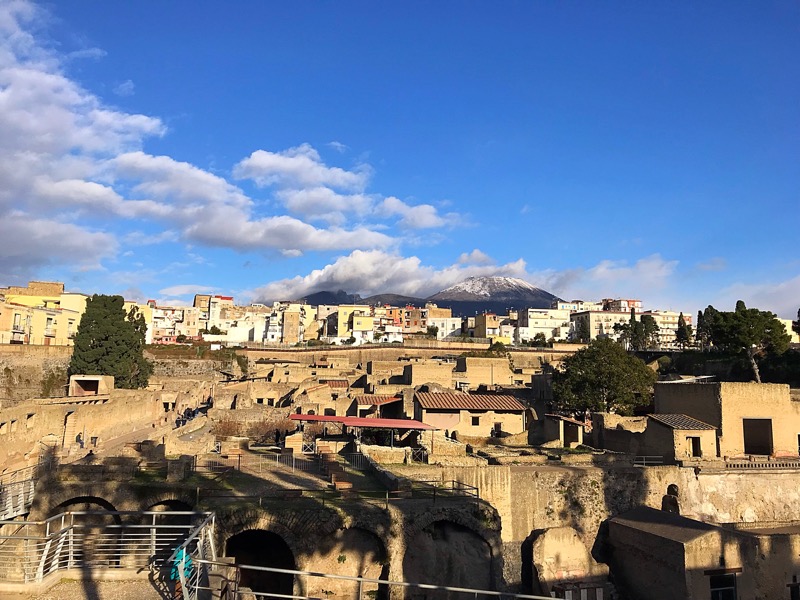 Herculaneum lies between Naples and Sorrento, to the west of Mount Vesuvius, while Pompeii is further down the coast, south-east of mainland Europe's only active volcano.  Each of the towns experienced different methods of destruction from the volcanic eruption in 79AD. Herculaneum by a lethal pyroclastic surge of hot gas and ash, whereas Pompeii was showered with rocks and debris. This has meant that the buildings in Herculaneum are better preserved.

How to get to Herculaneum

Herculaneum (or Ercolano in Italian) is easy to get to by train as it is on the Naples to Sorrento railway line. The ruins of the Roman town are underneath the modern town of Ercolano, a 10-ten minute walk from Ercolano train station, which has regular services from Napoli Piazza Garibaldi.

Find full details of how to get to Herculaneum by train here. 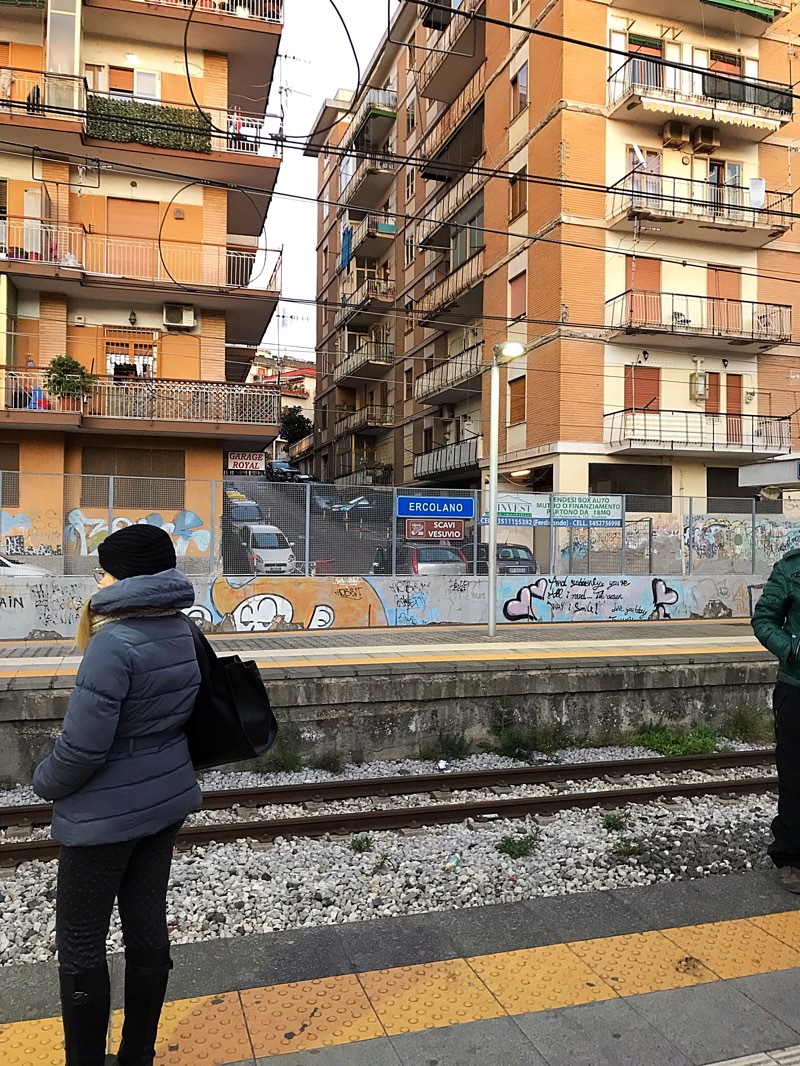 The eruption of Mt. Vesuvius on the afternoon of 24th August 79AD took most folks by surprise as it had been about 800 years since it last had erupted.  Unfortunately, Mount Vesuvius did erupt and engulfed the towns. Surprisingly, it seems that no one over the years had thought of having a dig about to see what was there until the 1700’s when a well was being dug. 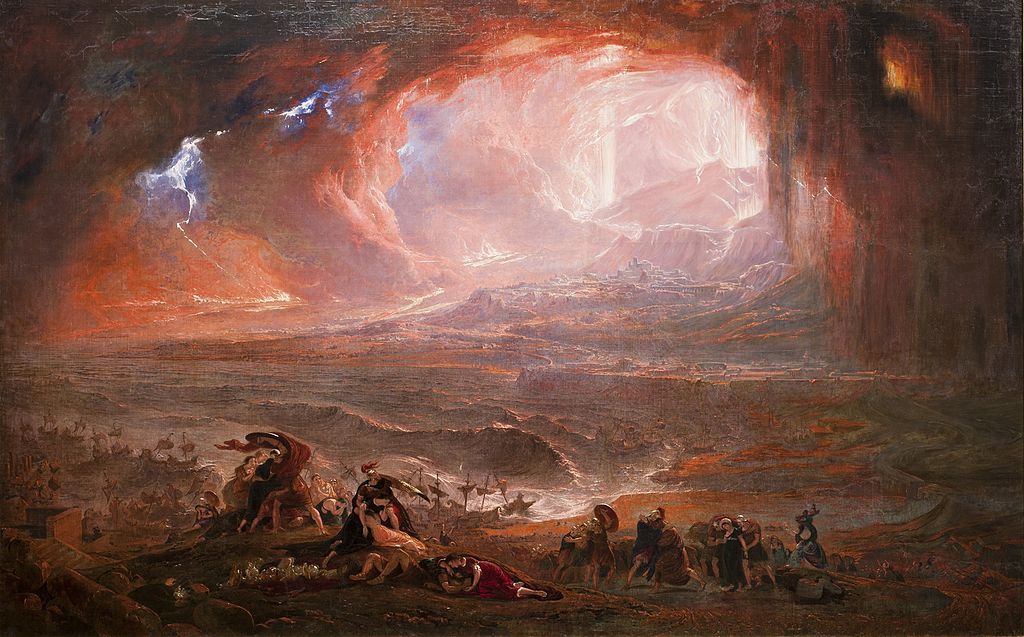 The Destruction of Pompeii and Herculaneum (c. 1821) by John Martin, © Wikipedia

Visiting the Ruins of Herculaneum

If you’re planning to visit a few cultural sites in Campania, such as Pompeii and Vesuvius as well as Herculaneum, you can buy a Campania Artecard. There is a 3-day and 7-day version; each card gets you into both sites (plus a number of other sightseeing spots in the area) over the period of your chosen card.

Opening times for the Herculaneum ruins are:-

Please check these timings before your visit on the Herculaneum official website.

Going to be visiting on the first Sunday of the month? Admission is free!

Or stop off at a little cafe called Civico 33, Corso Italia 33, Ercolano for food and drink. Service was 👍  and prices were great as well).

Looking towards Mt. Vesuvius over Herculaneum

What to see at Herculaneum

The site of Herculaneum is deep under the current ground level and away from the coast, even though it was once a port. This is due to the city being covered in mud, ash, ensuring that it was entombed and preserved for the future. Being sealed away, there wasn’t as much plundering of goodies in comparison to Pompeii, such as those removed for The Secret Cabinet. 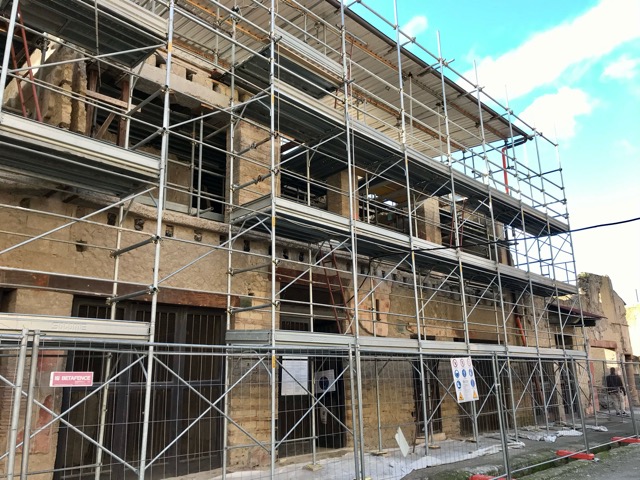 Around Herculaneum, you will see workers working away, preserving the site and possibly carrying out further excavations. Only a fraction of the site has been excavated, which you can access freely, but the main focus now is on preservation rather than further excavations. 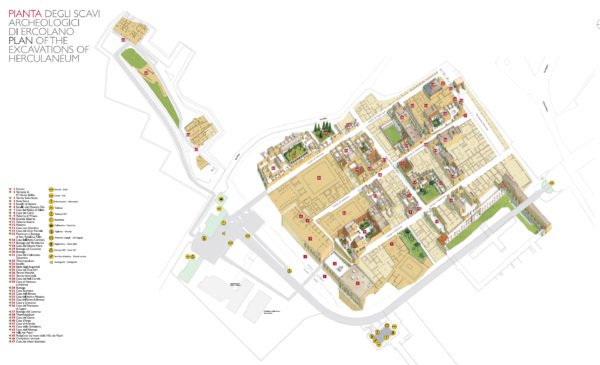 These are some of the main sites in Herculaneum. The number in bracket relates to its position on the official map.

The fornici were the port warehouses. These shelters were once along the side of what was the beach.  Within these structures are the remains of around 300 Herculaneum residents who perished trying to escape the eruption. 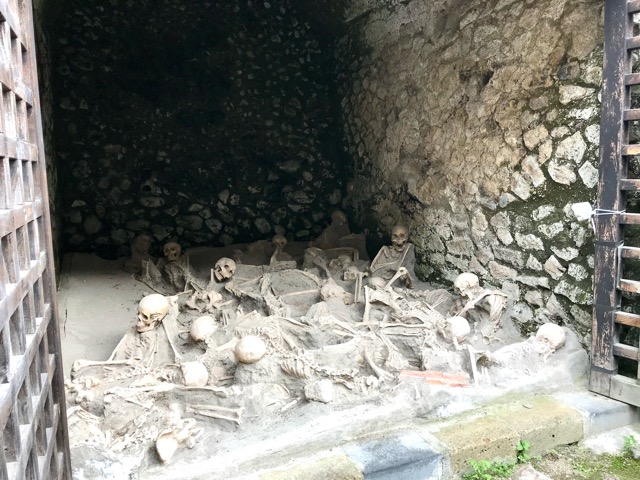 The Augustales were free men who were devotees of the cult of Emperor Augustus. This area looks stunning with the remains of columns and frescoes. 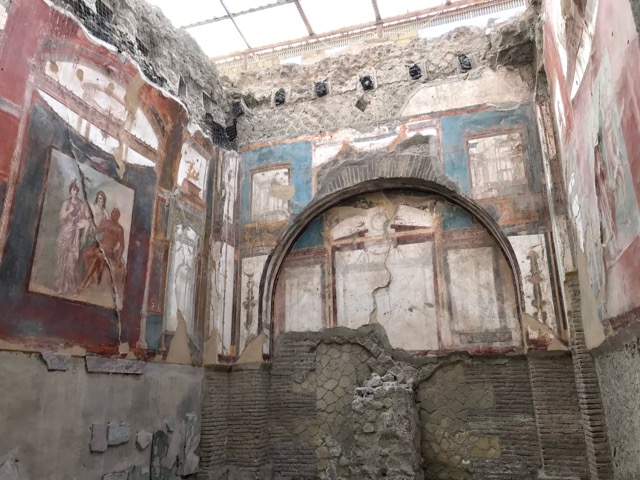 The Terme Centrali (Central Baths) were divided into areas for men and women. 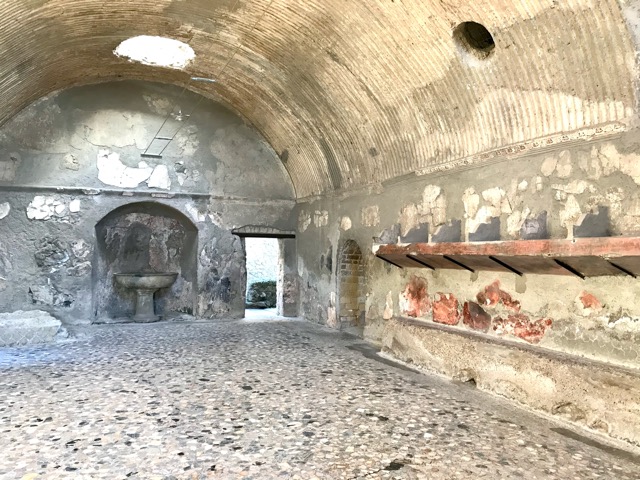 The House of the Samnites is famous for its beautiful Greek-style atrium with a marble impluvium (rainwater pool). 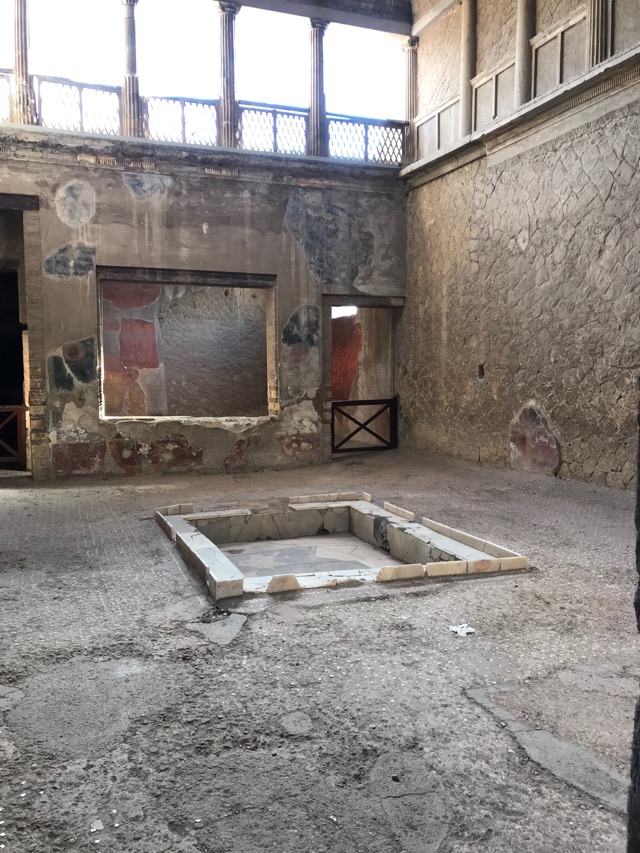 As you may realise, the name of this home comes from the wooden partition that stands here. The partition separated the atrium from the rest of the room. 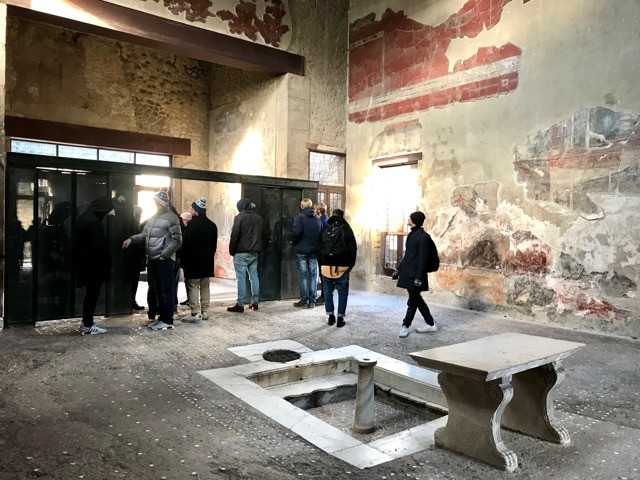 Visiting Herculaneum with small children can be difficult. The streets are uneven and not suited for prams or strollers.  The best way is to either carry small ones or restrict yourself to the upper viewing area.

Another place for kids to visit near Herculaneum is the MAV (Virtual Archaeological Museum), a short walk away. The site has a virtual, interactive exhibition that recreates ancient Herculaneum as it was before the eruption.

Free for under 13s 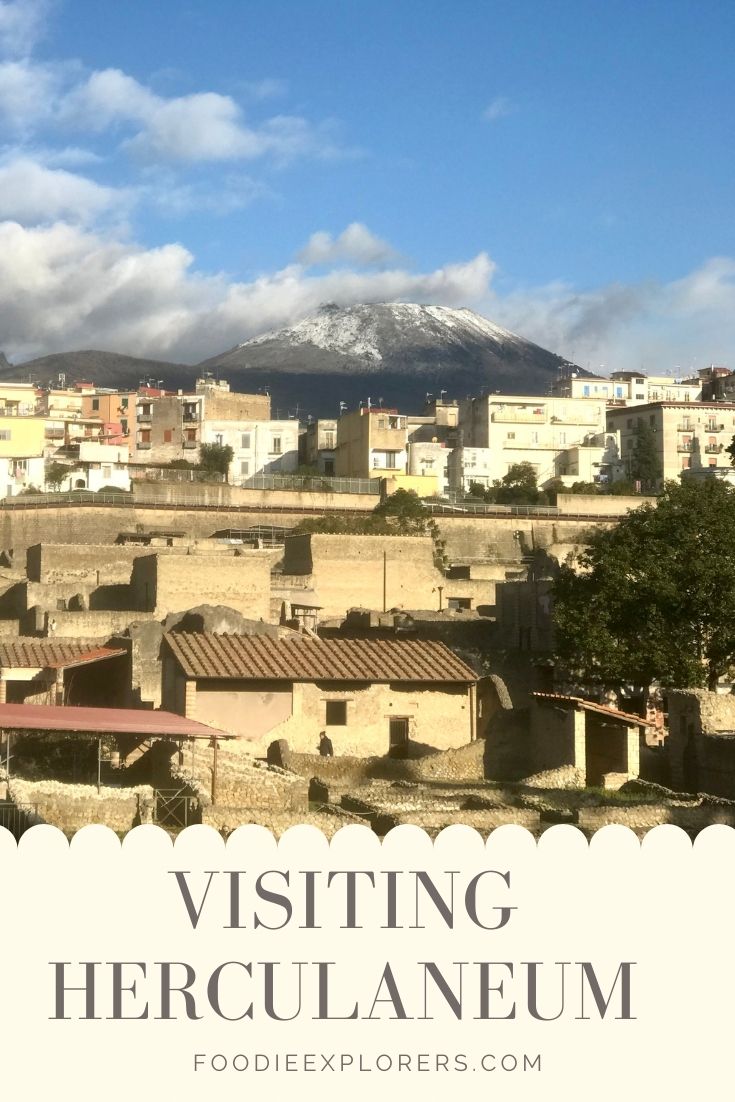