Katz's deli in the lower East side of New York comes recommended by most guidebooks and travel websites, and someone we know said that they make the best sandwiches in the world! It's a New York institution, established in 1888 (though the sign outside looks like it originally said 1898!), which has appeared on film and TV numerous times, most memorably When Harry met Sally. Being so popular with tourists it also gets very busy so you may need to queue, I read that queuing for 40 minutes is not unheard of. For a sandwich..!

Oh, and everyone seems to love it. Apart from me... 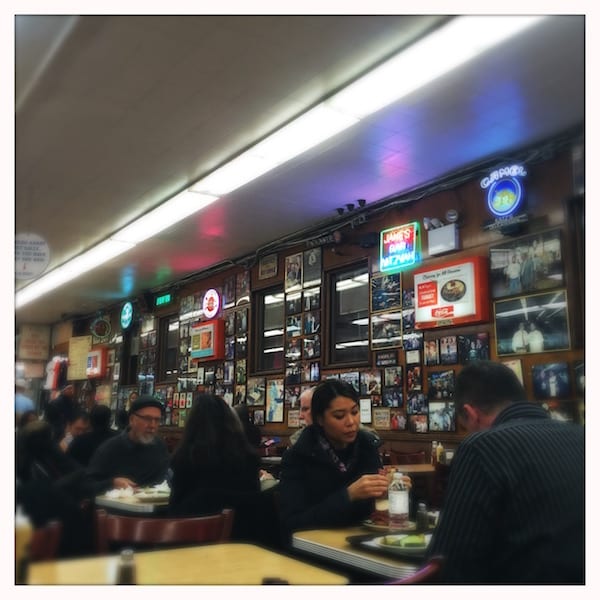 It's got a certain charm with a nostalgic wall filled with old photos and it looks like it's been this way for decades, like something you'd see characters walking into on an American sitcom. No one seemed to be smiling on our visit however! The slogan "send a salami to your boy in the army" is dotted around, a reference to when the owner's sons were serving in WWII. 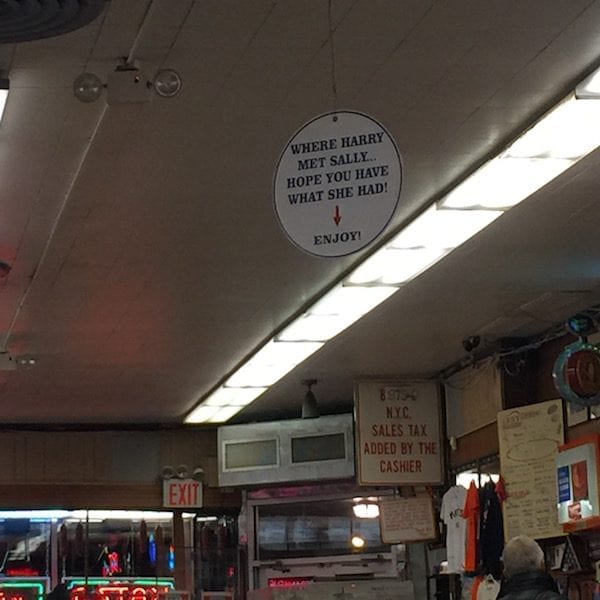 Here's where Harry met Sally and the line "I'll have what she's having" was committed to film. I certainly didn't have what she had...

I should have also mentioned that you get a ticket when you enter. Hold onto that as you'll need that to , I mean pay when you exit. If you lose it you get fined, no joke! For a sandwich. To get your sandwich head to a "cutter" who will, er, cut yer sandwich! If you don't want a sandwich they sell Jewish delicacies like matzo ball soup and knishes but that just fills me with the fear of this bizarre meme. See here for the full Katz's deli menu, there's plenty to choose from! 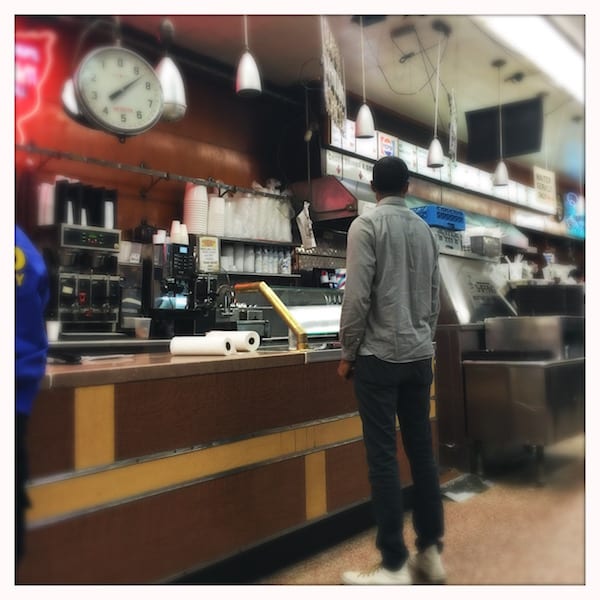 To drink we had a New York Egg Cream which is a bit bizarre as it contains zero eggs and no cream either! It's actually a mix of milk, chocolate and soda water, so a fizzy cold chocolate drink. Hmm...

We also tried their own Katz's Ale, brewed by Brookln Brewery, on draught. Supposedly a Vienna lager it's dark brown in colour and has characteristics more akin to a red ale. It had no head and looked stagnant with a malty cereal aroma and taste. 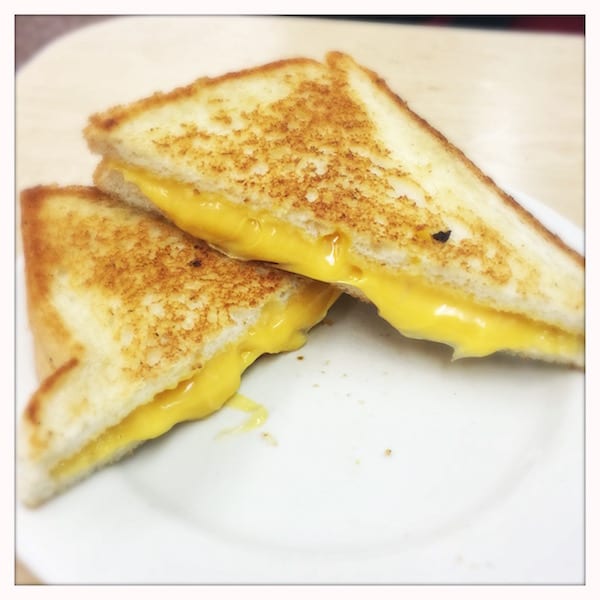 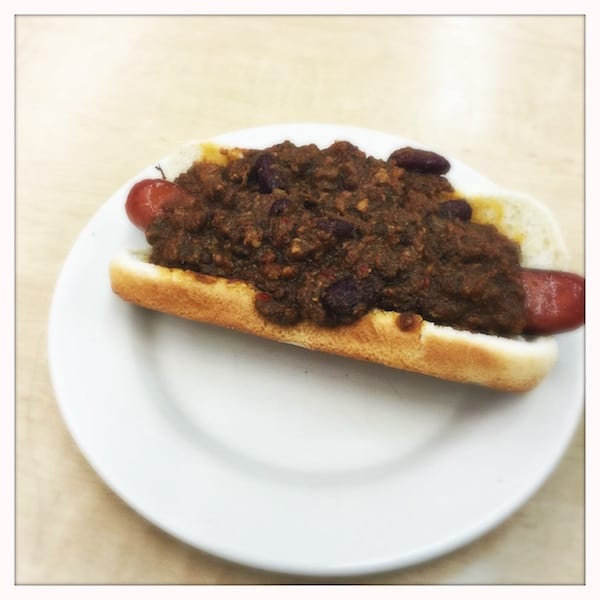 Would we fare better with a chili dog? Well, it was certainly (over)loaded with chilli which dribbled onto the plate and the dog itself was ok but hardly the stuff of legends. 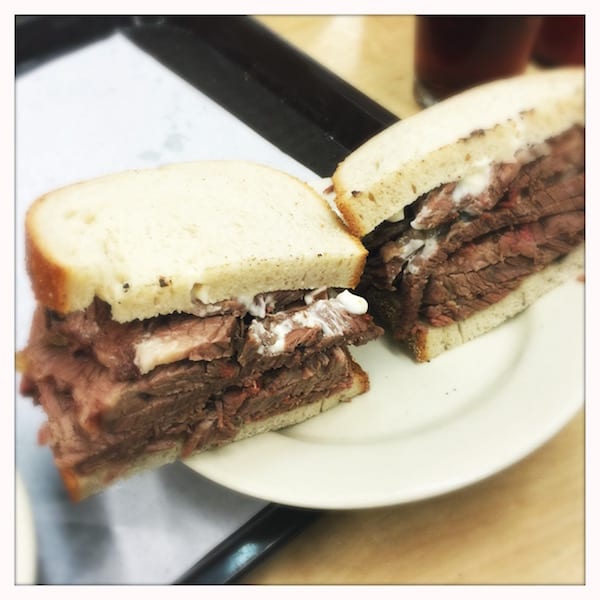 So here's the main draw - stupidly massive sandwiches. We'd been recommended turkey rueben and pastrami specifically but I begrudged paying over $20 for either sandwich. So I opted for the cheaper filling of brisket. My "cutter" asked what else I wanted but there was no indiction as to what was available so I plumped for mayo (I read later that this is not a good combo and shows that i'm a tourist!) and pickle, a gherkin, which he placed on another plate. 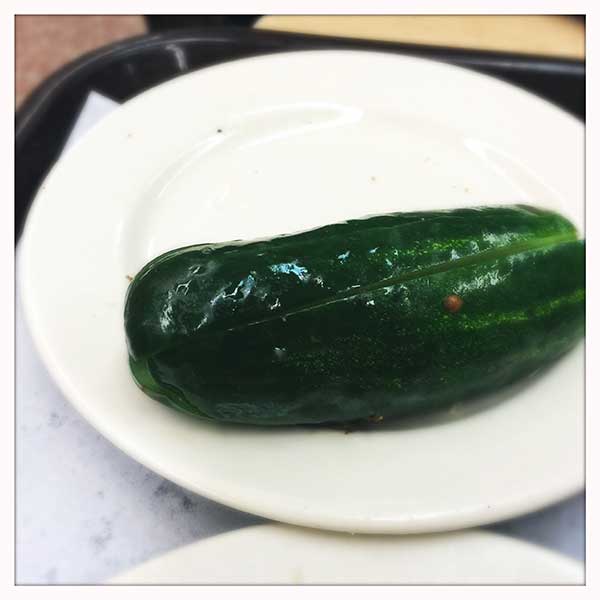 A full gherkin sliced in two, but not evenly. According to some, Katz's makes the best sandwiches in NYC except that the person serving me didn't seem to know how to even make a sandwich! Imagine ordering a BLT in the UK and the server handed you a sandwich overloaded with bacon and lettuce leaves and a beef tomato on the side. Back to sandwich school for you!

The rye bread, I liked, and it actually reminded me of Scotland's very own Mother's Pride plain bread, which the occasional health-conscious person back home complains about! The meat was good too but quite monotonous and the concept of a sandwich so massively big that when you lift it bits fall on the table doesn't work for me - same as with stacked burgers that you can't eat the way a burger was intended to be eaten - there's just too much meat, it's too awkward to eat, at least without a knife and fork or picking from the plate, and the gherkin isn't even on the sandwich! If Katz's cut the portions and prices and actually put all the ingredients together on a single sandwich then I might say I enjoyed it but then it would probably lose its USP of bigger is better, quantity over quality, style over substance. To me, it's a tourist trap, but one which most people are willing to pay for it seems, especially the Instagram millennial generation!

Our meal with one beer and one non-alcoholic drink came to $49.55 by the time you've added a tip (minimum 15%) and tax (almost 9%) you're in the region of $65 for sandwiches (£46.40 at the current exchange rate). Incidentally, since we visited the prices have gone up and the brisket sandwich is now $20.45 and the exchange rate isn't as good so expect to pay £50! 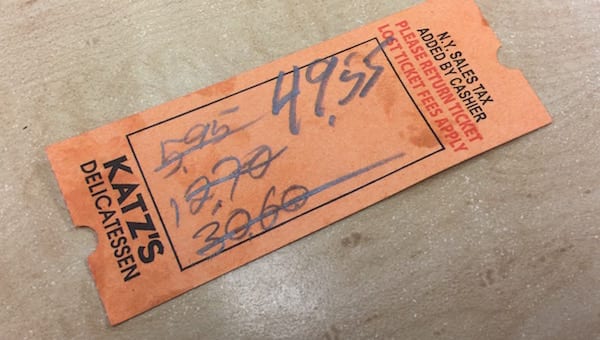 And what happens if you lose the little ticket? A minimum $50 fine plus the cost of your food per person! 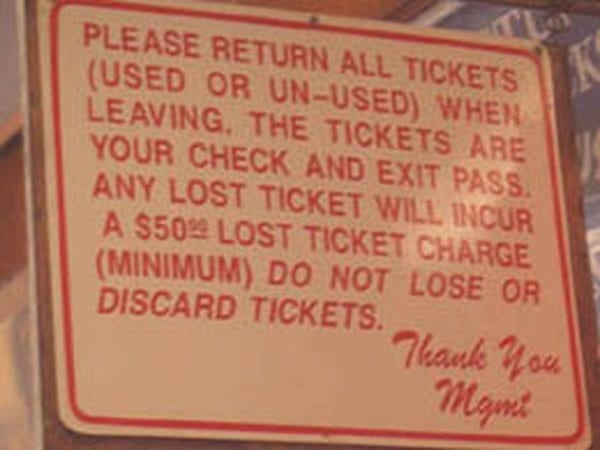 - REALLY expensive
- Full gherkin on a side plate, WTF is that all about?
- Size isn't everything
- Grilled cheese sandwich was boring
- Busy so there may be a lengthy wait
- If you lose your ticket then it's a minimum $50 fine!
- Egg Cream drink is a bit weird