The Big Lunch aims to get 1 million participants from communities across Scotland - will your community be part of a Big Lunch?

The Big Lunch is all set for 12th June, encouraging millions of people all over the UK to get together with their neighbours. 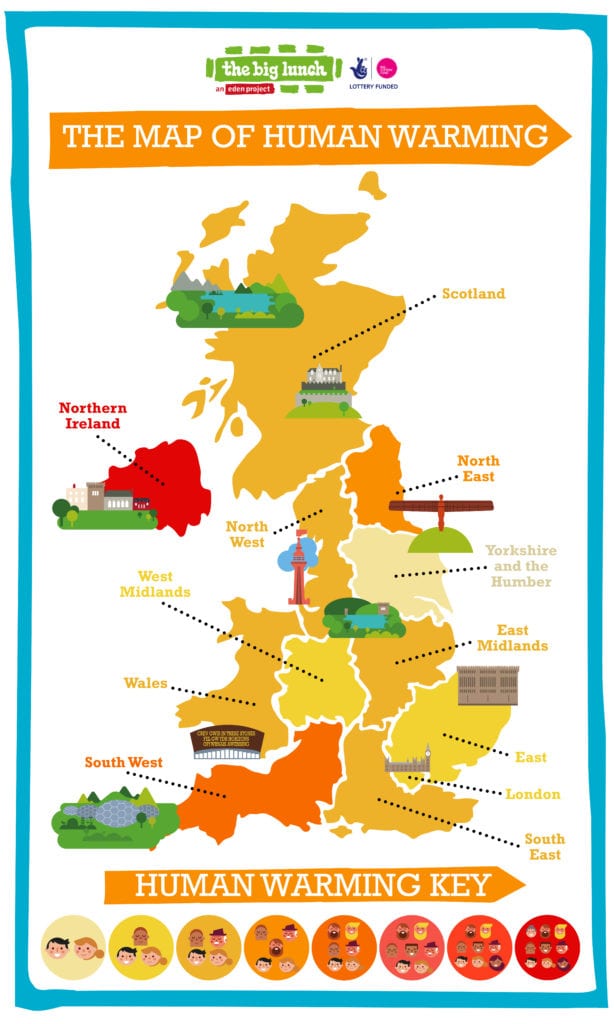 Here is the map of human warming showing where the highest numbers of Big Lunches are so far.

Now in its eighth year, the idea from the Eden Project, made possible by the Big Lottery Fund, helps you to have fun with your neighbours, feed community spirit and help to build stronger neighbourhoods.

*85% of Big Lunch participants from 2015 said it made them feel better about their neighbourhood; 8 out of 10 people have kept in touch with people they met at Big Lunches in previous years; Participants said the best three parts of their Big Lunch in 2015 were: 1. A great sense of community, 2. Enjoying good food and 3. Meeting new people.

Big Lunches this year are being held in communities as small and as far as the Isle of Lewis and Isle of Rum through to Clydebank, Brechin, Prestwick, Musselburgh, Barrhead and Kirriemuir. More will join in the coming weeks and The Big Lunch wants your community involved!

For people interested in getting involved this June, free packs and event resources are now available from www.thebiglunch.com. These include invitations and posters to adapt for communities as well as lots of ideas and info to help get the ball rolling.

Emily Watts, The Big Lunch Programme Country Manager for Scotland, said: “What The Big Lunch does is give neighbours a reason to come together. Every year more people join in; in 2015 we had more than seven million participants UK wide, and we're aiming for 10 million this year. We're hoping that 10% of that number will be in Scotland.

“It doesn’t matter if you're holding a street party, a barbeque, or a picnic in the park – people are the key ingredient. It’s all about connecting people to create stronger communities.”

"Big Lunches build friendships and create ‘human warming’ – communities where people start to share more, from conversation and ideas, to skills and resources and it makes them stronger.”