Stoats has launched a new charity campaign, Pot for a Pot. As the official porridge partner of World Porridge Day 2017, the company aims to raise funds to feed an entire African school for a whole year, in partnership with Mary’s Meals.

Following the success of Stoats’ charity partnership with Mary’s Meals for World Porridge Day 2016, the company has committed to partnering with Mary’s Meals on a larger scale with the new Pot for a Pot three-month campaign. Every time a Stoats Original Porridge Charity Pot is purchased, 7p will be donated to Mary’s Meals. The donation from each pot will be used to feed a child in Africa for one meal, with a mug of Likuni Phala porridge.

Hannah Stewart, Head of Fundraising of Mary’s Meals said: “We are extremely grateful to Stoats for helping us reach more children with Mary’s Meals, and we wish them the very best of luck in their fundraising efforts.
“Our work to feed the world’s poorest children every day they attend school would not be possible without the generosity of supporters.”

Throughout August to October, the limited edition Stoats Classic Scottish Porridge Quick Pots will feature the Pot for a Pot campaign and will be stocked in Waitrose, Tesco, Scotmid, Sainsbury’s and Asda as well as independent cafes, delis and farm shops across Scotland.

The campaign will culminate around World Porridge Day, Tuesday 10 October, when Stoats hopes to have raised enough funds to feed an entire African school for a whole year. World Porridge Day is a global celebration of one of Scotland’s favourite dishes and supports Mary’s Meals to provide hungry children across the world with one meal every school day.

Mary’s Meals school feeding programme is owned and run by community volunteers in the countries where they provide food. For example, in Malawi there are over 80,000 volunteers who take turn to prepare, cook and serve the daily meal in each school. Where possible, they always serve locally produced food which supports the local community and its farmers as well as the wider economy. 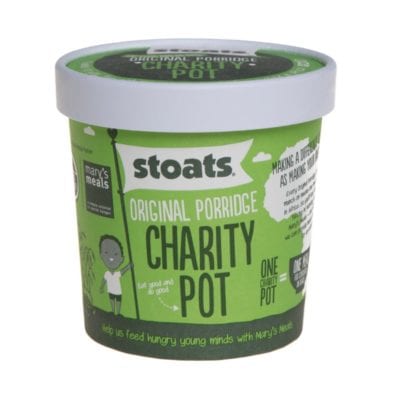 Tony Stone, Managing Director, Stoats, commented: “We’re committed to really making a difference with our Pot for a Pot campaign. Following our fundraising around World Porridge Day with Mary’s Meals last year, we’re keen to build upon this further. As an oats company, we know only too well what a good source of energy and nutrition these meals are. It’s a very fitting and important cause for us to contribute to. Together with our customers, we hope to raise enough funds to be able feed an entire school in Africa for a year. So please, enjoy our porridge and do a good deed at the same time by buying our limited edition charity pots between now and October.”

Further information on Stoats can be found at www.eatstoats.com