Burn’s night is merely days away and yet there is no haggis emoji to show the love for haggis!  McCaskie Butchers are launching a campaign for a haggis emoji and need your help.

Originally developed in Japan, emojis have been in international use since 2011, hitting the mainstream in 2015 when the Oxford English Dictionary named an emoji one of its ‘words’ of the year.  There are emojis for pizza, sushi, pretzels, burritos and croissants already, surely it’s time that Scotland’s national dish could do the same?

“With Burn’s Night next week, we are launching this campaign today to gather as many supporters as possible before the day itself. I should like for every haggis producer to benefit from this campaign as we give haggis the recognition it deserves and put it on the emoji map. Let’s get #haggisemoji trending!” 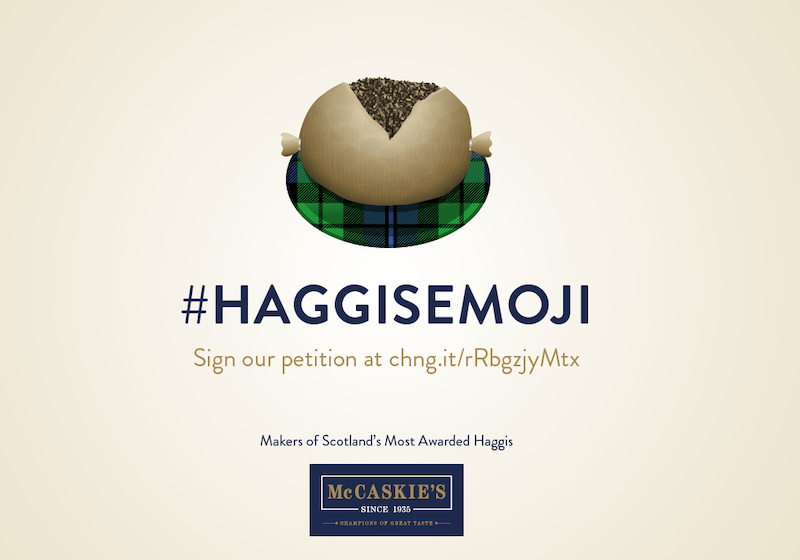 “Scotland is internationally renowned for its iconic national dish so what better way to spread the word and inspire people to buy haggis this Burn’s Night than a haggis emoji?!

“I would like to encourage Scotland’s consumers to get behind this campaign as I’m sure a haggis emoji would prove to be a big hit both at home and abroad.”

Support the campaign in two ways:

Use #haggisemoji on Facebook, Twitter and Instagram, to share your love of haggis or your favourite haggis recipe – those who use the hashtag will have the chance of winning a prize from McCaskie Butchers.

Sign the change.org petition calling for a haggis emoji at http://chng.it/rRbgzjyMtx