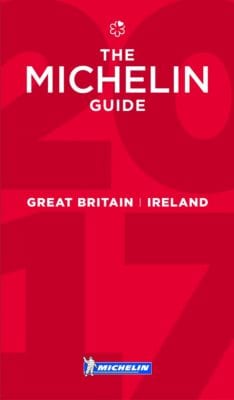 The 2017 edition of the guide includes a new Two Michelin Star restaurant: Raby Hunt at Summerhouse, near Darlington.  Another on the to-visit list!

Rebecca Burr, Editor of the Michelin Guide Great Britain and Ireland 2017, said: “London’s great variety of establishments, its history, but also its dynamism and vitality are illuminated by the capital’s new Michelin Stars.

“The Ritz Restaurant and Veeraswamy, London’s oldest Indian restaurant, both receive One Michelin Star. These establishments have long and illustrious histories, but the cooking at both has never been better than it is today.

“There have been some excellent additions to the guide across both Great Britain and Ireland - restaurants that are producing consistently good food using excellent ingredients.”

This edition of the guide also marks the 20th anniversary of the Bib Gourmand – Michelin’s award for good value, good quality cooking. This year the guide includes more than 140 ‘Bibs’, of which 24 are new.

Click here to see Michelin Guide Restaurants we have visited.