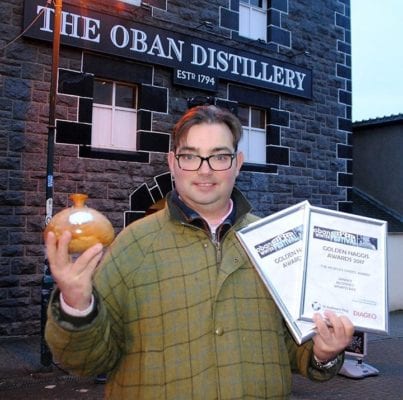 McCaskie Butchers haggis has been voted ‘People’s Choice Champion’ for the third year running at the annual haggis fest championship, the Golden Haggis Awards, which takes place as part of the yearly Winter Festival in Oban.

Scotland’s top butchers, who are all well-known for their high quality haggis, battle it out for this top award which is shaped like a haggis!

The “People’s Choice Champion’ is highly sought after as this award is voted by members of the public who have sampled the competing haggises.  Each of the entries to the competition is tasted with the public voting in their favourite.

This is the 5th leading trophy McCaskies has scooped for their haggis in 3 years and reinforces McCaskies position as producers of ‘Scotland’s most awarded Haggis’, and at the ideal time of year with St.Andrew’s day just a couple of days away!

McCaskies have recently opened their new state of the art production facility in Wemyss Bay, which has allowed them to increase output, meaning that more consumers will be able to enjoy their haggis, and other high quality products, including their multi national and regional award-winning black pudding.

And here is the haggis-shaped trophy!