Anniversary of the Chernobyl disaster

On 26th April 1986, at 01:23 (UTC+3), reactor four of Chernobyl power plant suffered a catastrophic power increase during a safety test which lead to explosions in its core. This lead to radioactive isotopes being released into the air as well as a destructive fire.

The fire was finally contained on 4th May 1986. Officially,  there were two deaths within the complex, one immediately after the explosion, and the other compounded by a lethal dose of radiation. Over the coming days and weeks, 134 servicemen were hospitalized with acute radiation syndrome, of which 28 firemen and employees died. Approximately, fourteen radiation induced cancer deaths among this group of 134 hospitalized survivors were to follow within the next ten years. Who knows how many lives have been touched by the radiation from Chernobyl? 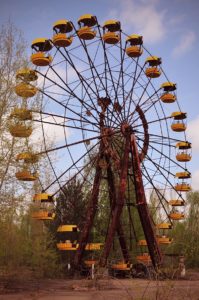 We visited Chernobyl a few years ago, Click here to read about our visit.