A ‘green’ destination, a ferry service which sails to over 20 destinations on the west coast, and the biggest Hogmanay party in Scotland, were among those crowned the best in Scotland at Scottish tourism’s equivalent of the Oscars.

Thistle judges noted the “impressive impact” that Edinburgh’s Hogmanay has had on the local economy with 99% occupancy for 31 December, praised social enterprise Comrie Croft for its “collaboration across the region” and described CalMac, headquartered in Gourock, as a “lifeline service focussed on the customer”.

Inverness business owner, Freda Newton MBE, who owns and manages Loch Ness by Jacobite, was rewarded for her role in tourism with the prestigious Caledonian MacBrayne Silver Thistle Award which was presented by Fiona Hyslop, Cabinet Secretary for Culture, Tourism and External Affairs.

She received the prize for her “pivotal role in the region’s tourism industry” including her work as an ambassador for Scotland on international business trips and was described as “an inspirational role model to women” and “mentor to young entrepreneurs”.

The 2016/2017 Scottish Thistle Awards, in association with Fishers, recognise innovation, excellence and success in the hospitality and tourism industry – rewarding hotels, restaurants, B&Bs, visitor attractions, events and individuals who go that extra mile to provide customers with exceptional service.

There were winners from across Scotland: from Laggan Outdoor Activity Centre (Best Outdoor/Adventure) in Dumfries and Galloway to Mill of Nethermill Holidays (Best Accommodation Provider) in Aberdeenshire, the National Museum of Scotland (ScotRail – Best Visitor Attraction) in Edinburgh to Kinloch Lodge Hotel & Restaurant (Fishers – Most Hospitable Hotel) on the Isle of Skye. 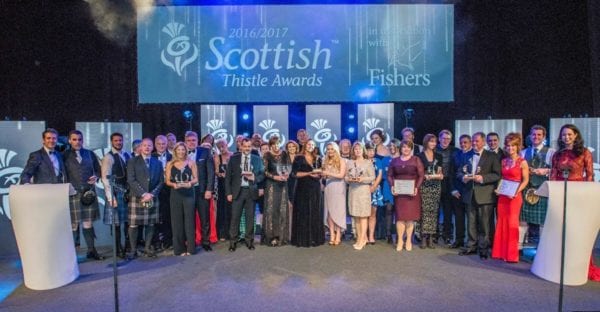 “Scotland’s tourism businesses, and their 217,000 jobs, work incredibly hard to make our country a must-visit destination, and ensure visitors are assured of a warm welcome.”

“Congratulations to all of the winners at the 2016/17 Scottish Thistle Awards National Final. They represent the best of the best in Scotland and epitomise the strength and depth of the tourism and hospitality experience across the country.

“The Scottish tourism industry and hospitality sector prides itself on delivering a rewarding experience for visitors and all of our finalists should be proud of their achievements in reaching the final – which, in itself, is both a recognition of excellence and innovation, and a sign of quality.

“Tourism is the heartbeat of the Scottish economy – supporting communities and creating jobs throughout the year in every corner of the country. We look forward to the 2017/18 Scottish Thistle Awards when we will celebrate the achievements of our industry colleagues during our 25th anniversary year.”

“We have supported the Scottish Thistle Awards for three years and are proud to have been the headline sponsor this year. At Fishers we don’t just think of ourselves as a laundry company, we know that we are an important part of Scotland’s tourism sector and we’re happy to show our support to other businesses in this sector.

“Last night we celebrated all the hard work that goes into making tourism a success in Scotland and there is a great deal to be proud of. All of the finalists deserve to be commended for their contribution to tourism and we would like to extend our congratulations to all of the winners.”

This year the Scottish Thistle Awards received a record-breaking number of entries, totalling 715, amounting to a 16% increase on last year.